The End Of Pages

With six hours to go before they close their doors forever, the shelves at Pages are nearly empty, a testament to the quality of owner Marc Glassman's buying, and the devotion of his customers, who will have to find somewhere else to go for their cultural theory, outsider fiction and glossy design tomes when the lights go off after exactly thirty years to the day.

James, a customer for 20 years, is in shock. He'd shown up looking for a book by the psychedelic hot rod illustrator Coop only to find a bare store and depressing news. "It's bad," he tells me. "This is wrong. Indigo is everywhere and the only good bookstore is gone. I got my Anton LaVey books here. Liberal fascism strikes again."

As Glassman has been at pains to point out, his store isn't closing because of poor sales, but because the rent on the city-owned property was about to skyrocket, and he was facing the prospect of seeing his tight profits disappear. As a result, a lot of people passing through the store have harsh words for the city, and Mayor David Miller in particular, though the blame for Pages' extinction probably resides in the more abstract realm of city budget policy. 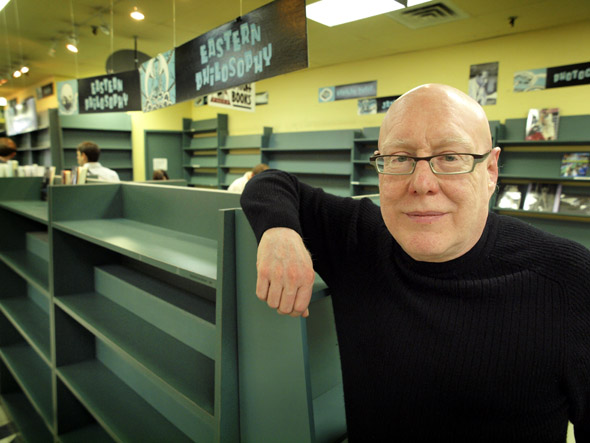 It's the reason why Glassman thinks he's been able to maintain his calm throughout the long terminal phase of his store - it's hard to find anyone to blame. Even the building manager has been astounded at how helpful he's been, going so far as to recommend an architect to help with a renovation of the space after Pages is gone. Sitting in a booth at the Peter Pan just a block away - along with Pages and the Silver Snail, one of the few vestiges of post-punk Queen West still standing - he seems surprised at the depth of his reaction on the last day, which he had intended to spend attending film festival press screenings, though his staff had ultimately let him know they wanted to have him around.

Manning the cash register at the store is Chris Reed, and employee for three and a half years. "The last week has been strangely encouraging," he says. "It's like when the farmer's barn burns down, and the community helps him build a new one." Thanks to the strong sales, Pages will close debt-free, with Glassman able to pay his staff decent severance packages. Still, the mood has been somber.

"It's been very much like being in a receiving line at a wake," Reed tells me.

Back at the Peter Pan, Glassman muses that Pages opened the same month as This Ain't The Rosedale Library (TATRL) and Edwards Books And Art - three pillars of Toronto's once-thriving independent bookstore community. Edwards in long gone, a victim of over-expansion that survives only as a footnote in the legal battle over Sunday shopping, but TATRL survives in a new home in Kensington Market, though owner Charlie Huisken's son once did time behind the cash at Marc's store.

The end of Pages is, ultimately, the end of the pre-digital counterculture that thrived on Queen West, before the chain stores and sushi joints, when good book and record stores were vital to the city's loose but thriving Bohemia - the place where you went during the day, before the bars and bands and after-hour booze cans. As Glassman talks about what he's about to lose, it's obvious that one of the things he'll miss most of all is being a compere and matchmaker to that unruly community of writers, artists, designers, musicians, filmmakers and journalists.

"I can't tell you how many fantastic, beautiful, brilliant women I introduced to so many pretty okay guys," he says with a grin.

For his part, Glassman says he'll be alright. He still has his second career as a writer and magazine editor, and there's talk about reopening the store, if he can find a committed backer and the perfect space. Right now, though, things feel pretty final, which is why he's been seeking refuge at the Peter Pan, with friends and family and a few glasses of white wine. He compares the store to a mistress, though the empty shelves make it feel "like a corpse."

The Pages legacy will live on, though, in This Is Not A Reading Series, which Glassman runs with Reed, and its kid-friendly spin-off. The "big deal goodbye," as he calls it, will be a farewell party on Sept. 8th at the Gladstone that he's dubbed Afterword, after which that community will slip away back to their libraries and the cold embrace of Amazon, where they'll doubtless find themselves wondering why they find it so hard to get into a really good argument about books (or movies, or music, or art) these days. 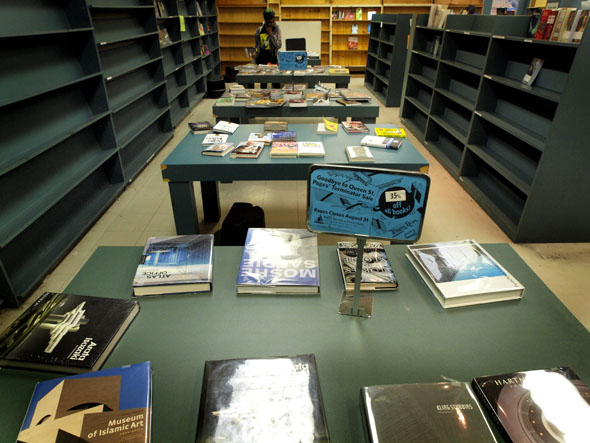