When I was a kid there was Chickadee magazine and then Owl, and then the thinking girl was unceremoniously dumped off the science train of the Mighty Mites, and into the world of Tiger Beat.

"Maybe you can think big thoughts again when you're older," the magazine rack seemed to say. "But the teen and pre-teen magazines that tide you over until then will be wholly populated by doe-eyed boys, glossy ads for lip gloss, and vanilla-flavoured sex tips. Be prepared for a solid decade where your interests are presumed limited to bangles and boyfriends."

Then 2004 rolled around, and a Canadian upstart broke through these piles and piles of flippant frou frou and frizz -- Shameless, a magazine "for girls who get it."

Shameless is also written particularly for teen and pre-teen girls. But with politics in place of pop idols, queer positive instead of quizzes that only care if "he" likes you, and sexuality that's invited along for the whole messy and complicated ride that is growing up.

At the end of June, Shameless went to the Gladstone (pictured) to launch their first anthology: "She's Shameless. Women write about growing up, rocking out, and fighting back."

I asked Megan Griffith-Greene, co-editor (along with magazine publisher Stacey May Fowles), a few questions about this latest addition to the Shameless family.

blogTO: Under which subject(s) or section(s) would you like to see "She's Shameless" in a bookstore?

Megan Griffith-Greene: It's tricky. We're for youth, we're for adults, we're non-fiction, we're cultural and social studies. I think that one of the things that has always defined Shameless is that we don't fit neatly on any one shelf, so our book was always going to be the same way. I'd love to walk into a store and find a shelf "For Girls Who Get It."

Who is one person you would love to love the book?

My niece, Samantha. She's only one at the moment, and I think she might just love to chew on it right now. So I'll give her a bit of time.

You've got the magazine, the website, the blog. Where does the Shameless book fit in the roster?

It's a bit different, because it's a space devoted to personal essays, all of which take place in the past. So the format is quite different, although the range of tone and subject fit quite naturally with what we do in the magazine and on the blog. We've got funny and fierce writing on sexuality, choice, authority, friendship, body issues, disability, race and mental health, to name a few. 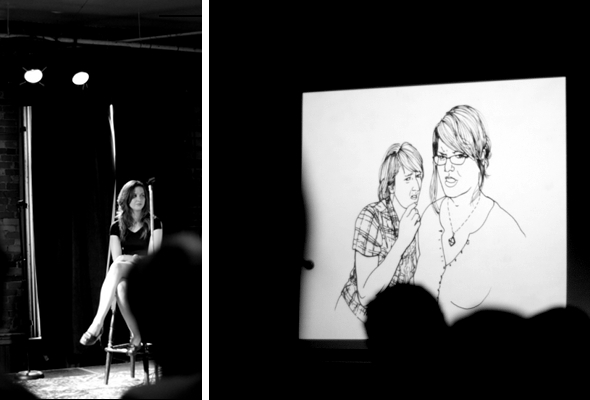 The contributors to "She's Shameless" are the "shameless women who help them find it" rather than the "shameless girls who know there's got to be something more". How do you strike a balance between writing for teenage girls and writing at them?

It's a hard balance, but one that was very important to both Stacey May and I from the start. The last thing we wanted to create was something patronizing or preachy. What we really wanted was for the writers to reach back to the time when they were shameless girls, and to write from within that experience. All of the writers in the book got that immediately.

What are your thoughts on "explicit content"? Do you think there's such a thing as "you must be at least this old" before reading She's Shameless? Shameless?

Absolutely not. Teens are a lot smarter than most people give them credit for. So we like to give them that credit. I hope that we start a lot of conversations that other people are scared to have with teens.

What are three things you wish someone had told you when you were a teenage girl? What do you wish they hadn't?

I wish that someone had given me Zoe Whittall's piece from the book to read -- it's wise advice at any age. Some of her advice -- like sluts don't exist -- is a lesson that wouldn't be lost on a lot of 20- and 30-somethings. But I was pretty lucky as a teen. I was lucky enough to find an alternative school where a lot of what we stand for at Shameless was pretty standard curriculum. I guess if there was one thing: I wish someone told me to write more of it down.

Stuff I wish people hadn't told me? I had a boyfriend who told me I should smile more. I had a friend tell me I was a prude. And I had lots of people tell me that it was cute that I was interested in politics, current events and social issues. Cute. On the other hand, those things made me argue more, laugh louder and behave more shamelessly. So that's not such a bad thing.

Are there more Shameless books on the way?

I hope so! We all have day jobs, though, so we may all need a vacation first.

As your first book, and your first launch night, how would you describe the feeling(s)?

I feel kind of like a three-year-old who's eaten too much Halloween candy. Hyper. Nervous. Excited. Over the moon.