Neil Gaiman, author of Coraline among many other critically acclaimed work (the Sandman graphic novels among them), gave an enchanting talk at the St. Lawrence Centre's Jane Mallett Theatre on Monday night.

The Luminato event sold out in three minutes, proving that hearing an author of his caliber read from his own work, and sign autographs afterward, still has the power to draw crowds of fans.

Prior to the talk, it could be said that I wasn't a die-hard fan of his work, but hearing him read from his new novel The Graveyard Book has converted me. Gaiman and his writing are both witty and irreverent.

"People look at my career as an author with puzzlement," said Gaiman, "because I broke all the rules. It's likely because I came out of the comic world, where anything goes." 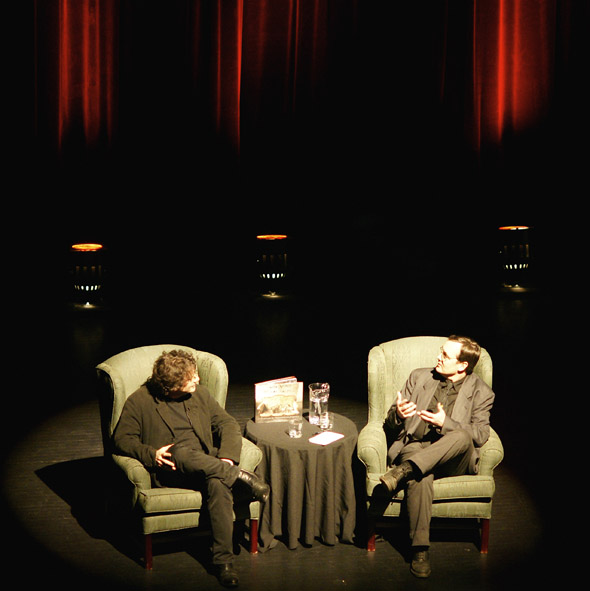 Space's Mark Asquith chatted with Gaiman about his career and the writing process while the audience listened intently, observing the two on the starkly lit stage, with an apropos backdrop of six red lights pointing upwards onto a velvety red curtain, setting the scene for the readings of his dark tales that were to follow. 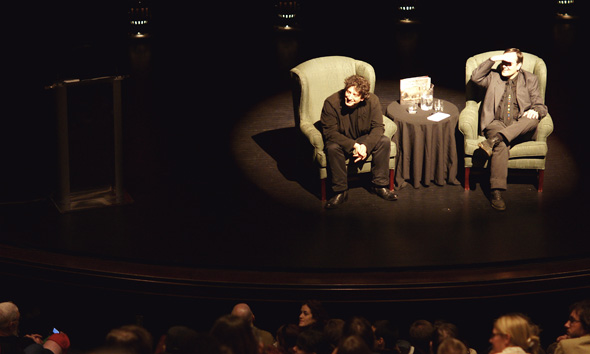 A Q&A proceeded, in which there were invariably too many hands to appease than time would allow. The entire event only lasted about an hour and a half.

Gaiman was his usual accommodating self, following the talk with a meet-and-greet/autograph signing session which lasted twice as long as the scheduled event, ending at around midnight. That's three hours of signing! You'd think he'd have writer's cramp by then.

But Gaiman was probably used to it, admitting to penning one of his recent novels in pen-and-ink, foregoing modern technology's conveniences. He told of losing chapter three on an airplane, but wasn't too concerned, as he said his handwriting is illegible by anyone else.

"I would write longhand in a leather-bound notebook with pen and ink," explained Gaiman. "I did this to get back into the older way of writing. Technology has changed the way we write."

He went on to describe how, back in the 18th century, you'd get these wonderful, long sentences that went on for a paragraph, because if you'd stop, you'd have to re-ink the pen. 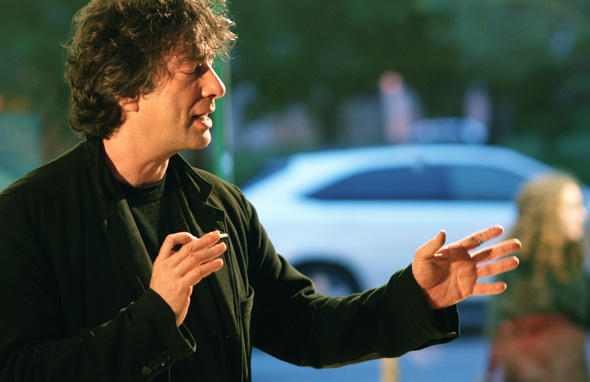 But Gaiman is no stranger to technology, having embraced social media early on. You can find him on Twitter with his already half-a-million-plus followers. He's an active Twitterer with over 3,300 updates. "I'm so used to the wonderful world of comics," he said, "which is why I've taken like a duck to water with Twitter."

Gaiman's reading was delightful to listen to. He should read from his work more often. While he admits he doesn't like the sound of his own voice (who does?) I think he I might check out some of his novels read on downloadable audio books from iTunes or Audible. 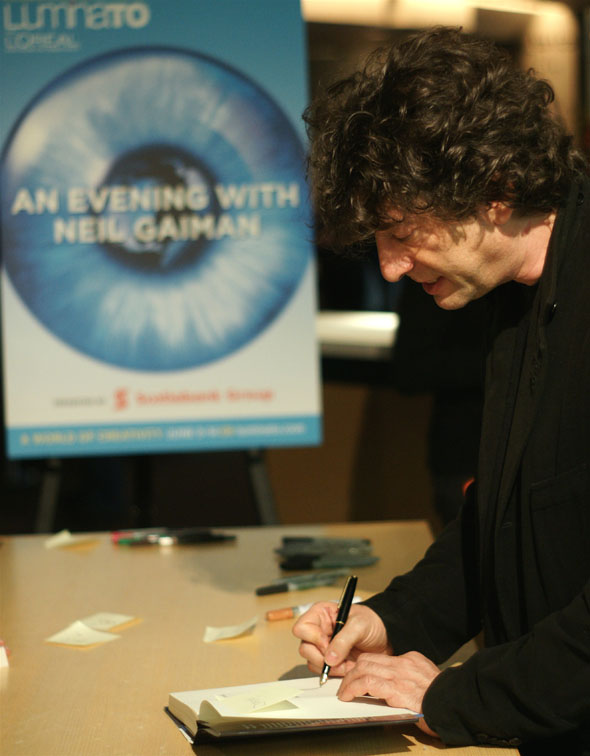 It's the story aspect that's most important to him. And Gaiman is a master storyteller, as is evident in his work. He has collaborated with many other fine artists, including Terry Pratchett (Good Omens), Dave McKean (Violent Cases, Signal to Noise, and The Tragical Comedy or Comical Tragedy of Mr. Punch) and Roger Avary (Beowulf).

It was a treat to hear Gaiman read from Who Killed Amanda Palmer?, a fairytale he wrote in collaboration with Amanda Palmer of The Dresden Dolls, who put out her debut solo album with the same title. Gaiman and Palmer are now romantically involved. Sounds like a marriage made in heaven. Or, in his case, perhaps the graveyard.