Every now and then I'm given the opportunity to talk with some truly amazing Torontonians. It's not something that happens as often as I would obviously like, and I cherish these conversations for what they are: rare glimpses of world that is both kinder and more caring than the one-hour-news-cycle world I read of, so often overwhelmed by rush and distant squalor.

Today I spoke with Kim Beatty, mother to The Children's Book Bank, on the day that her foundation turns six months old. In honour of the occasion, Kim and her staff of sixty volunteers threw a half-birthday party this morning at the Bank's location in Regent Park, where a majority of incomes lie below the Toronto average. The event was attended by children, regulars and not-so-regulars, and adults, including a number of supporters from the Yonge Street Mission. Also among the supporters was Marguerite Campbell, principal of Rose Avenue Public School, a kindergarten and primary school in St. James Town. 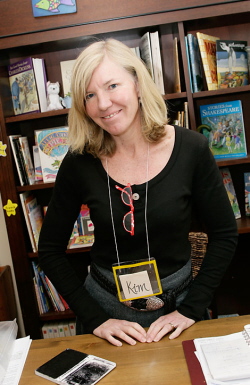 For a cause still in its infancy, the bank has taken some remarkable first steps. "15,000 visitors have been through our doors," said Kim this afternoon by telephone. With the Bank's one-book-per-visit policy, that translates to 15,000 volumes given to youngsters and a wide range of families in, but not always from, the diverse GTA. That's 2,500 books each month, just a little over an unbelievable 83 books per day.

Many of the Bank's gleeful customers are eager to improve and develop their English language skills.

"The reception from the community has been absolutely overwhelming," said Kim. She fondly recalls one afternoon in June when 280 books passed into small hands over a three hour period. "Kids are still thrilled to have a book and hold it in their hands."

The new and lightly-used books are collected through drives and donations, and are made available to children up to 12 years of age free of charge. The Children's Book Bank is located at 350 Berkeley Street.