The Great Outdoor Fight Signing at the Beguiling

Like many fellow nerds, I began reading Achewood after being introduced to it by a friend several years ago. I admit I threw it away after deciding it was needlessly incomprehensible and did not feature enough swear words to be truly funny. Of course, like many others, I returned to Achewood and was amazed by the insight, humour and epicurean sensibilities that do not exist in any other comic, online or not.

So, it was with great excitement that I finally met the creator of the comic, Chris Onstad, at a Wednesday night signing of his latest Achewood book, The Great Outdoor Fight at the Beguiling.

The first thing that happened is that I barely caught Chris as he was walking from the Beguiling to the adjacent pub for the actual signing. After some quick photos highlighting his "good angles", as he put it, I left him to attend to a huge lineup of fans that stretched outside.

The Great Outdoor Fight, for those unfamiliar with the Achewood universe, follows the story of the two main protagonists of the story - Roast Beef and Ray - as they compete in a no-rules 3000-man outdoor fight that lasts over 3 days. The book adds to the story that's not present in the online comics - the history of the Fight, past champions, and even several GOF recipes, presumably tested by Mr. Onstad himself.

It's impossible to describe the humour and the depth of the Achewood universe without following the story lines to see the characters build up their personalities with each comic. 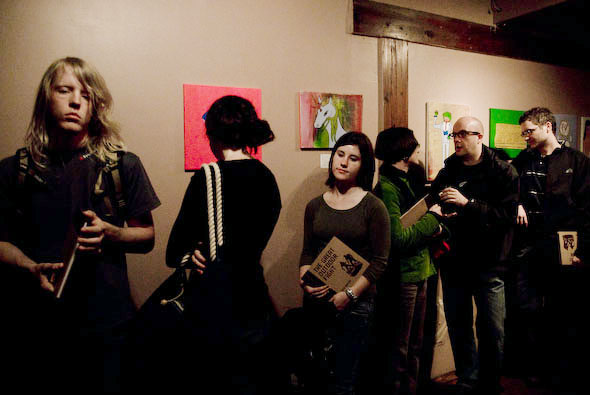 For the fans that came to sign their books, posters, limited-edition strips and t-shirts, Mr. Onstad was a mix between a rockstar and an old friend. One thing that immediately jumped at me was the way he was able to make even the most nervous high school admirers feel comfortable even as they could barely blurt out their favourite character, which he would then sketch in a book - or a scrap of notebook paper, in some cases.

Standing on a podium and armed only with a small towel, a double gin and tonic and several felt pens, he worked through the throng of people without ever becoming the least bit frustrated.

I used my only chance to ask a question for something innocuous - what does Chris like most about Toronto? Apparently, the answer is that he likes anything that's as far away from Silicon Valley as Toronto.