If you're not currently growing a mustache and were never an Emperor of Rome, it's sometimes hard to indulge in that most ancient of practices, liberally re-labeling months. Fortunately, there's NaNoWriMo.

National Novel Writing Month is a mad-cap dash to hammer out 50,000 words of juicy fiction in a state of insomniac, literary abandon between 12 am November 1st, and 11:59 pm November 30th. I caught up with some of Toronto's would-be novelists at greenavi cafe for Tuesday night's group writing session, to talk about the sci-fi greats, Godzilla movies, and why droopy-eyed subway commuters and well-toned coworkers are fair game for much-needed plot.

DJ Sylvis is one of the three organizers that take care of the Toronto NaNos, and in his spare time runs a theatre company of most serious nature. He threw out two failed novels (one of them was unapologetically smut) before settling on his current narrative, prototypically entitled Subterranean Homesick Blue. "It's a collection of character sketches of people I see on the subway," he said. "It's very theatrically inspired."

Debbie Isaac's first words to me were, "the dream sequence is a very, very good technique." Debbie was about three days of four behind schedule when we spoke. She's a three-year veteran of NaNoWriMo, and is, like DJ, an organizer for the Toronto group. She was full of advice on achieving that magic 50,000. "In my first year I started again. I wrote like ten pages, and then I started again. And then I had my character open up a book and I copy-pasted my first ten pages into it." Her novel ("it's chick-lit" she said with wince) involves a single 30-something, a psychic, and the inevitable love interest. 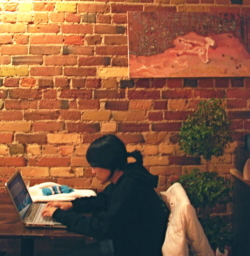 Yuwei Run out-obscured me right off the top of our conversation, when she chose as her favourite novel Orson Scott Card's re-release, Treason. "A lot of his work is set in a fantasy setting, but then the outside world is actually very scientific," she said. "And then, magic, uh, happens." This is all with a certain wryness, and a fearful glance at the white space on her laptop screen. This is Yuwei's fifth time tackling NaNoWriMo, but she was already 4,000 words behind on Tuesday night. Her story? Future Toronto, a Gaiman-esque war between Heaven and Hell, but, she was very clear, nothing too brutal. I asked her about her characters and she joked, "I kind of plan for most of them to be offed. But not in a gruesome way."

Wayne Lee is a monster movie fan. As of Tuesday he'd typed 5,000 words, or only a thousand and a half behind schedule. (to his and his compatriot's credit, I've never met a NaNo who wasn't behind schedule) His main character is Andrew Wong, part of an ex-team of monster hunters. "They were a team of monster hunters in the 80s, in high school," he explained. "The idea originally was that there was going to be some reminiscing about the 80s, about them getting old and fighting monsters. But so far it's turning into mostly just fighting monsters." He's taken on NaNoWriMo five times before, completed it four of those times, but never writes in other months. "It's just to flex my creative muscles - learn a bit more about storytelling." His favourite movies? Among them, Godzilla vs. Mothra.

Mike Nagoda has completed novels before, but this is his first time at NaNoWriMo. His inspiration? "It's sort of like Watership Down," he said. "The basic concept is there's a wolf pack in this story, and what happens is they get a hold of a shotgun. And the whole pack goes to hell. In the end, quite literally." Mike is the only NaNo I've met to set down all 50,000 words with a good old fashioned scribble. Beating NaNoWriMo means keeping to a minimum scheduled output of 1,666 and a third words, an essay or a half, each day. It was understandably hard for him to guess at his word-count, but on the other, pencil-dented hand, he's never tempted by Facebookrastination. "I rarely ever do this," he assured me, "this is like an exception."