It was edging on 8:30 when I showed up, late, to the International Festival of Authors' Thursday night reading. Hanging around astronauts at charity events is a fantastic excuse for any transgression. But still - I arrived too late to hear from Canadian poetesses Lorna Crozier and Allison Pick, but just in time for New Yorker Nathaniel Rich, editor of The Paris Review, to begin reading from his debut novel, The Mayor's Tongue. Several hours later I walked out of Harbourfront Centre's Brigantine Room, passed Adrienne Clarkson and John Ralston Saul, with a signed copy of Patrick Lane's generation-jumping, farming family epic, Red Dog Red Dog and the knowledge that Patrick is unfortunately internet-illiterate. 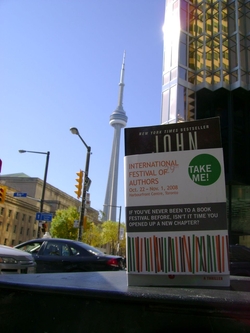 The Mayor's Tongue is a fantastical yarn following two narrators, but chiefly the young Eugene Brentani, a college graduate and devotee of fictional author Constance Eakins. During Nathaniel's reading the narrator, taken aback by the realization that he knows more about the writer who was the subject of his college thesis than he does about his own father, embarks on a vividly invented conversation between himself, age 23, and his father at the same age. The two men utterly deny their resemblance, but strike up a friendship when they notice they are reading the same novel on the New York subway - of course, it is one of Eakins's. Surrealist hilarity is the bread and butter of young Nathaniel's prose: my understanding is that the story transports its characters to bizarro-Italy, and the realm of a deific, cruel, Mayor.

Patrick Lane is best-known for his twenty-plus collections of poetry and his courageous memoir of gardening and alcohol addiction What the Stones Remember / There is a Season. He's taken home a Governor General's Award and his latest has been nominated for the prestigious Giller Prize. Patrick's reading of Red Dog Red Dog rounded out the night for me with language that approached Steinbeck in its sentimentalism and grandeur. The passage Patrick selected was one narrated by a daughter, dead in infancy, who retells the stories her own father mumbles to her through the fog of a whiskey bottle as he sulks beside her grave. His characters are delightfully complex, confused as much as they are confusing, as they stomp their way through shotgun weddings, incest, and suicide. It's gritty and enticing and you should be reading it right frakking now.

Top photo by JosĂŠ from the blogTO Flickr Pool.