Toronto Prevails over Montreal in War of Words

Forget Scrabulous on Facebook. The Canadian tournament Scrabble scene is where it's at.

Canada's got some of the top Scrabble players in the world. Toronto and Montreal have a longstanding rivalry among its Scrabble players. This weekend, the two cities battled it out at the annual Kingston Cup Match.

It was a hard fought battle in the top division. Toronto's team was led by current Canadian and 2005 World Scrabble Champion Adam Logan, a math lecturer at the University of Waterloo. While Montreal had two former Canadian and World champs in David Boys, a programmer analyst, and Joel Wapnick, a music professor at McGill University, who recently placed 4th at the World Scrabble Championships in Mumbai, India.

Having joined the club and tournament scene about six years ago, I helped represent Toronto's B division, which edged out Montreal for the 401 Trophy. I went 7-5, playing some interesting words along the way, including WHIRR, BENDYS, YEELIN, BUXOM, SUNSHINE, BURKA and YACKING (for a whopping 90 points to open a game).

So you think you can compete with these guys? 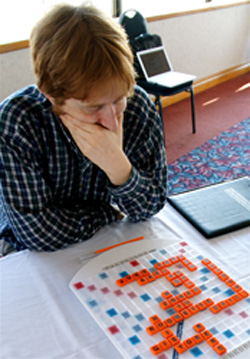 Everyone played 12 games over the weekend "in a spirit of friendly rivalry," a motto coined by the late Michael Wise, co-founded the Toronto Scrabble Club, whose current director, John Chew, organized the tournament.

Think you've got what it takes to compete face-to-face? The North American Scrabble Tour (NAST) is hosting a satellite tournament January 18 as part of a series of events to determine the qualifiers for the NAST Final Event this summer.

If you're keen on playing face-to-face, but prefer a more casual approach, check out Scrabble in the City which meets tonight and every Monday night at a Kilgour's Bar Meets Grill (509 Bloor Street West) in The Annex.

With a little practice, perhaps you can make the team next year and ensure Toronto holds on to its trophies.