Some Words Spoken: An Interview With Monica S. Kuebler

There doesn't seem to be much that Monica S. Kuebler can't do. She's studied acting, dance and music, holds a diploma in audio engineering, and does performance poetry. She currently spends her time working as associate editor / webmistress of Rue Morgue Magazine and running Burning Effigy Press, a micro press specializing in genre titles, provocative fiction and poetry.

I met Monica at Toronto's Word On The Street festival last year at the Burning Effigy Press booth where I picked up a copy of her poetry chapbook, "The Sound Of One Girl Screaming." As the title suggests, her poems are alive with vivid emotional imagery: sometimes heartbreaking or full of rage, sometimes intensely sensual.

We don't believe everything we see on CNN
or read in the Toronto Star.
We are the revolution.
We are the cause and the effect.
We are the next big bang, baby.

Monica is working on a second poetry collection tentatively titled The Sick And The Beautiful and overseeing the Burning Effigy Press Web site. The publisher will be announcing its line-up of spring authors in the next couple of weeks. ("Additionally, Nicholas Kaufmann's General Slocum's Gold, which was the first release in last year's new horror chapbook line, just made the preliminary ballot for the Bram Stoker Awards -- that's huge news and we're all really proud!")

From the bio on your Web site, it sounds as if you have a ton of talents and interests. Do you consider yourself mainly a writer?

These days, I'd primarily classify myself as a writer/editor, but that's probably more due to the fact that I'm currently doing those things in my day job as well. Will I have the same answer next week, next year? Hard to say.

Because I tend to be something of a chameleon (in all aspects of my life), and because, as you say, I have a ton of interests, my focus can change at the drop of a hat. Perhaps that's why I'm not such a big fan of labels - the only suitable one for me would probably be: workaholic, and frankly that's not so flattering, even if it's true! I always have at least a half dozen projects, in several mediums, on the go at all times.

How long have you been writing?

I fell in love with poetry when I was eleven - I was desperate for an outlet and that's the one I stumbled upon. From that point on I carried a notebook with me at all times. I've been writing steadily ever since.

What was your first writing sale?

My first chapbook, "Memories of Two Weeks of Silence... or a journey into chaos", in 1997. I was 21 at the time and though I'd had work appear in a few local London, Ontario-based 'zines before then - I was going to college there at the time - it was the first time I was approached by a publisher for a standalone work. 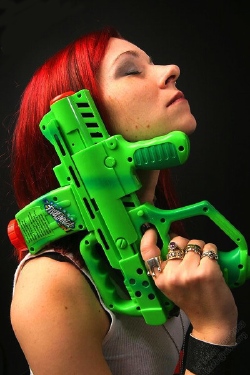 How did you get involved with Burning Effigy Press?

I started it! I wish I could say that getting "Memories of Two Weeks of Silence..." published was a great experience, but in fact, it was a terrible one. One so bad that I think I actually stopped writing for more than a year following it. Without going into details, it left me shell-shocked and totally distrusting of publishers.

As a result, Burning Effigy Press was born. It was to be the antidote to that experience - a small press run by writers for writers, where each writer would not only be involved in every step of the publishing process, but their work would be given the attention to detail it so rightfully deserved, something I was never afforded with the publication of "Memories."

At the time, I basically wanted to make Burning Effigy a safe place for new/young talent to spread their wings. I didn't want any other up-and-comers to have the painful first publication experience that I had.

In time, our focus has evolved and changed - but we're still run by writers for writers, and our number one priority continues to be making sure that our authors and their works are handled with the utmost respect.

Sorry to hear about the bad publishing experience with "Memories Of Two Weeks Of Silence." Any tips for hopeful writers out there to help them avoid going through what you went through?

Get everything in writing, and sign a contract! Also, insist on seeing proofs of the final layout (of your chapbook/book) before it goes to print, and make sure that it's written into your contract that you can submit corrections to the publisher at that stage.

This sort of advice is old hat to any writer who's been in the biz for a while, but oftentimes young/new talent has no idea what they should expect from the publishing experience or what they should feel comfortable demanding from their publisher.

I was so overjoyed when someone first wanted to publish my work as a chapbook, I didn't consider any of this - and yes, sure enough, it bit me in the ass.

I rise at about 7 a.m. and brew a pot of coffee (as I'm nothing without my morning caffeine fix). Then I spend the next two and a half hours working on any Burning Effigy Press business that requires my attention. If there's none of that on a particular day, I spend it working on whatever freelance projects I have on the go.

Following that I get ready for work and head off to Rue Morgue Magazine where I spend the next eight hours of my day writing and editing for the mag, and wrangling the company's websites. When I return home, I like to spend some quality time with my hubby, dog and snakes.

Unless I'm in the middle of a pressing project, I try to keep my evenings open for relaxing and socializing. I used to be a really horrible workaholic who didn't know how to enjoy her downtime - I may still be a workaholic, but I've since learned how to make time for the other important things in life too! You might notice that I didn't mention writing poetry or working on my novel in there anywhere, and that's because I use my weekends to focus on those types of things.

It's too easy to burn out on writing when you do it for a living, so you have to learn what sort of balance works. For me, it's keeping the poetry and fiction writing to non-work days (and vacation time).

What other advice do you have for aspiring poets/writers?

Everyone gets rejected - expect it and try not to take it too personally. Rejection doesn't always mean a piece of work is shit, it often just means that the story/poem is unsuitable for a particular publication (for any number of reasons) or that it didn't click with that particular editor. Editors are just like everyone else, they'll have preferences for particular styles of writing/themes, etc., and those preferences will inform the decisions they make. S

o basically, my advice is two-fold: 1) If you really want it, don't give up, and 2) Take the time to study and hone your craft. And by this I don't necessarily mean taking courses or going back to school, but read, research and evaluate other works in the same genre/style as yours - what can you learn from them?

There are also a ton of great books available on every aspect of the writing craft, consider perusing a few if you find yourself stuck or in need of advice. Yes, writing is a solitary profession, but that doesn't mean you have to go it alone!

To that end, also consider joining a writers' group, you might have to bounce between a few before you find the one that best suits you - but the people who are involved in them swear by them, and they can be great places to have your works-in-progress critiqued.

I see from your blog that you're working on a horror novel. Care to share any details?

It's a zombie novel that doesn't concern itself with eradicating the influx of the undead. That's all I can say at this point.

For more info about Monica, see Death Of Cool or Burning Effigy Press.