Only for Harry Potter will you see a couple thousand kids and adults line up at midnight for a book launch. Bay Street south of Bloor was closed off from 8pm until midnight last night for Indigo Books' "Midnight Magic," the much anticipated launch of Harry Potter and the Deathly Hallows, the seventh and final novel in the J.K. Rowling series.

Charu Dhavalikar, 18, is the first to snag a copy. I ask him how long he'd been in line and he says since seven. "Wow!" I say in amazement. "That's five hours!" Then he corrects me. "I lined up at 7am, a full hour-and-a-half before the next person." That's 17 hours prior to the official release of the book!

Dhavalikar and his brother Om, 14 (pictured above) came to Toronto from Plainsboro, New Jersey with their parents, who were here for a conference. What else would a couple of out-of-town teenagers do on a Friday night in this city?

How much magic can you have in one night? More photos and stories after the jump...

Before we can get into the book store there's plenty to keep us entertained, as a block of Bay Street is converted into Diagon Alley for a few hours: a bouncy castle, a magic show, fire juggling and Juno award-winning band The Satellites. 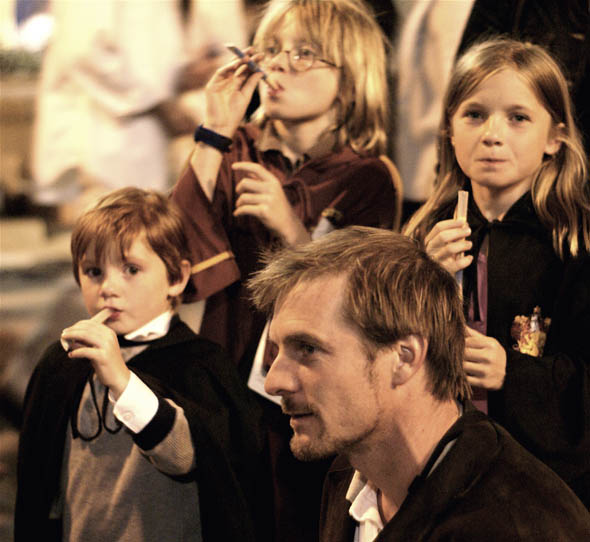 (From left) Thomas, 4, Haley, 11 and Abigail, 9 and their dad Ted Rath stay awake with little sugar tubes, just outside Indigo Books during the Midnight Magic event.

Haley, wearing her Harry Potter glasses, says she's the biggest fan in this family. "My dad started reading the first book (in the series) to me when I was about six," she explains. She now reads the books herself, but also enjoys the movies. "I especially liked Harry Potter and the Order of the Phoenix, when Professor Umbridge is taken away by the Centaurs."

Once inside, we are sectioned off into groups according to pre-assigned coloured wristbands. People young and old fill the book aisles. Some kill time playing Super Scrabble while others just try to stay awake. 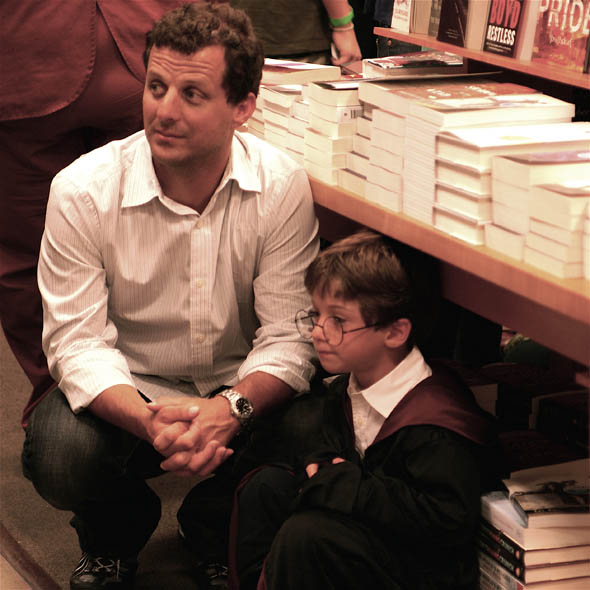 Dino Spadafora and his son Lucas, 7, drove in from Windsor, Ontario for the book launch.

In the moments before midnight I feel the anxious anticipation mounting due to the top secret nature surrounding the launch. Posters that decorated the store for the event are raffled off and the crowd gets denser in front of the cashiers. 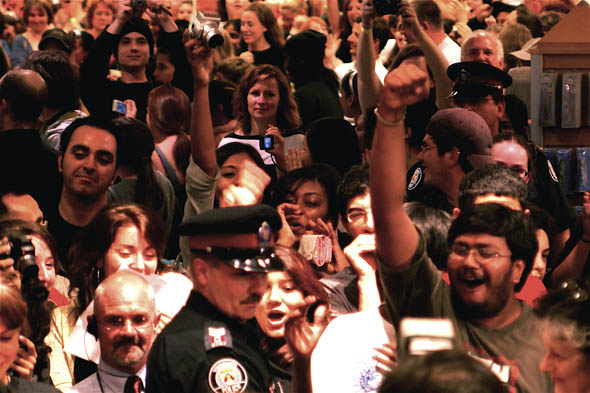 After Dhavalikar -- the first in line -- pays for his new Harry Potter novel, he's still basking in his 15 minutes of fame. "I'm running on adrenaline right now," he says. "I can't wait to go back to the hotel and start reading this."