The Mutt is named for the mish-mash of global cuisines on the menu, and evokes the cozy pub feel inside.

It’s an homage to the Dutch and Sri Lankan background of chef and owner James Kleyn (Drift, Honest Weight), and the mix of cultures that populates Toronto. 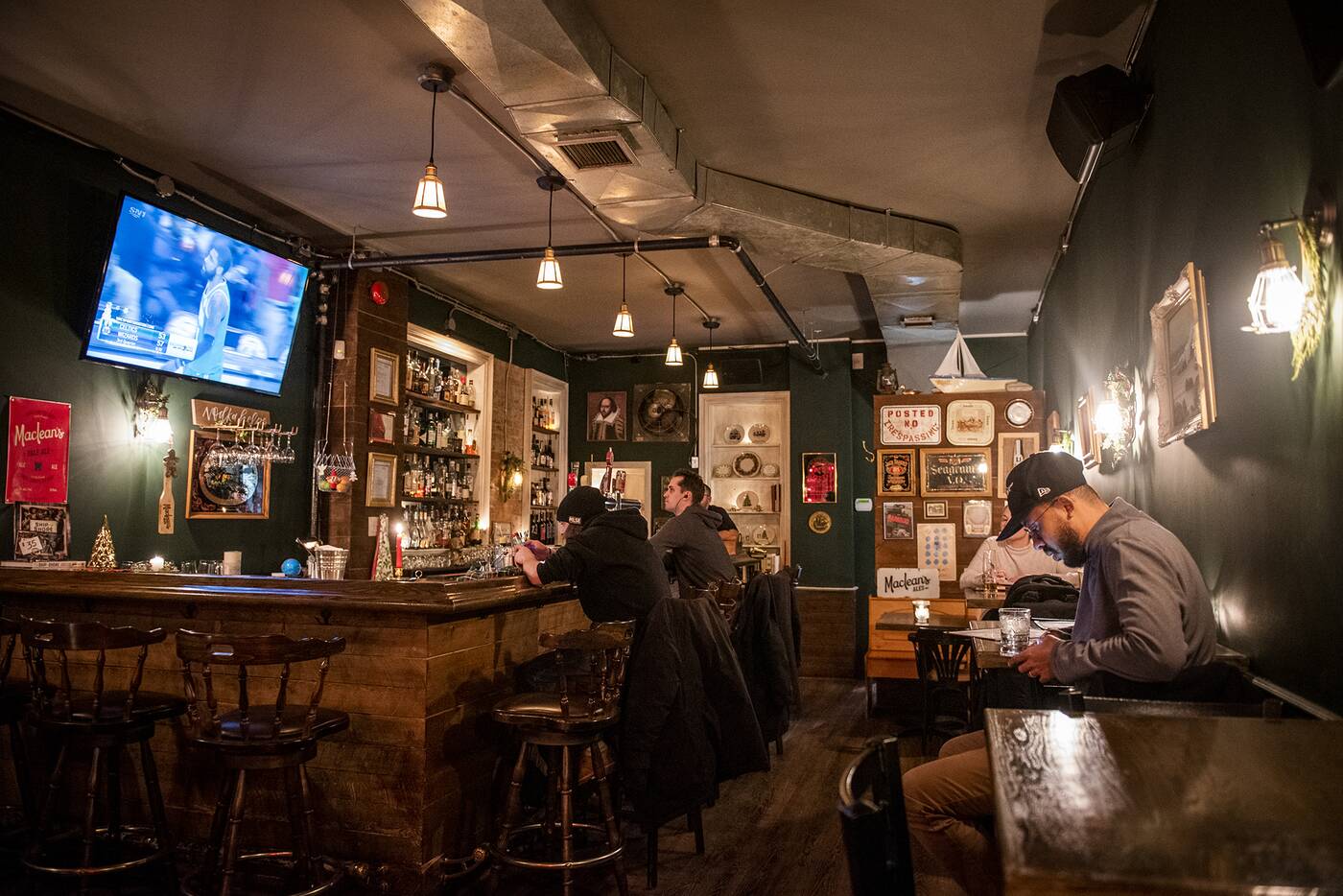 Formerly home to The Derby, the 30-seat space is decorated kitschily with rumpus-room-type touches like an old tapestry that’s literally from Kleyn’s childhood home. 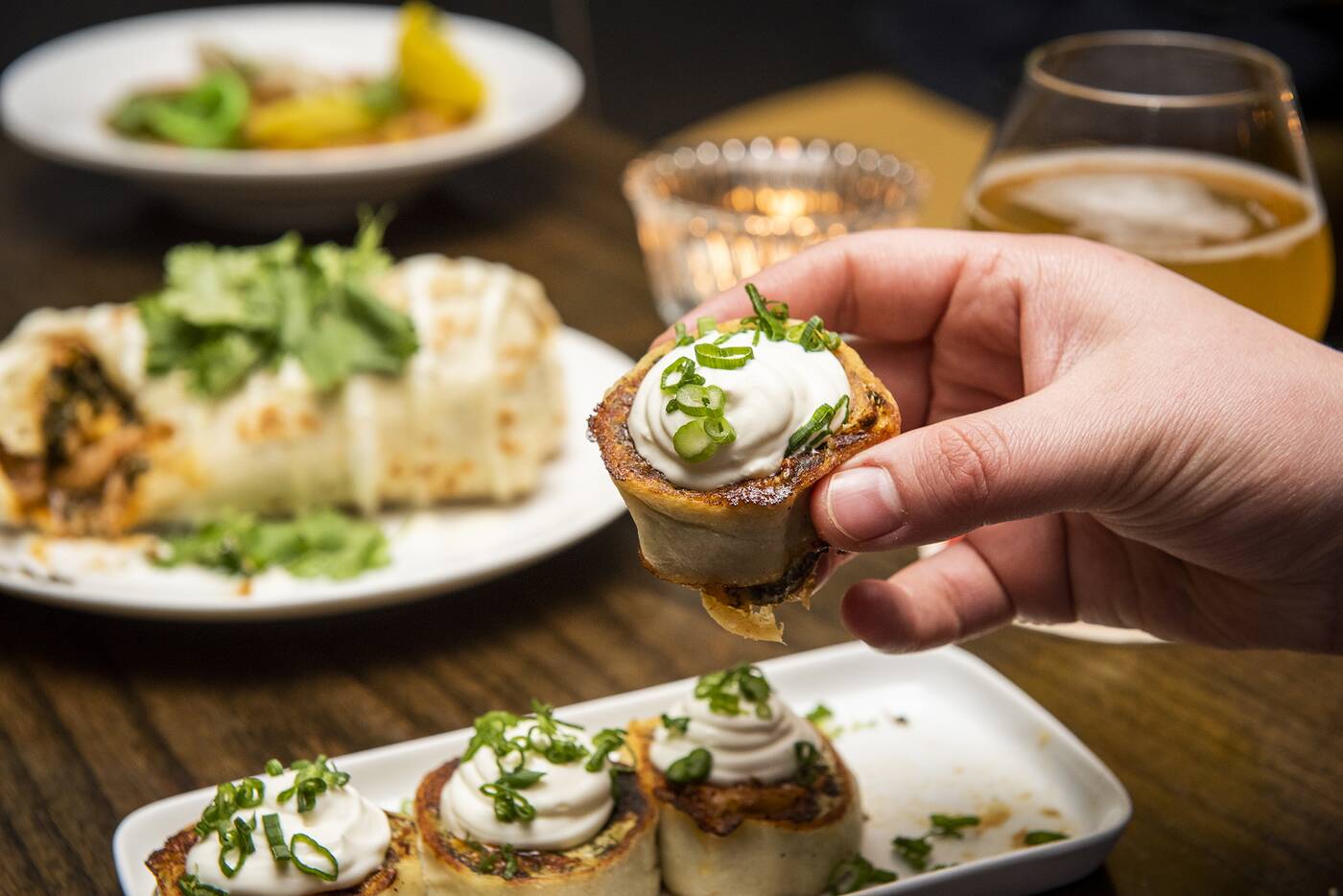 An antojitos ($10) starter is quizzical at first, but quickly reveals its delicious comforts: a mixture of sour cream, garlic, cream cheese, jalapeno, spinach, and tex-mex seasoning is rolled up inside a flour tortilla which is cut into slices and seared off. 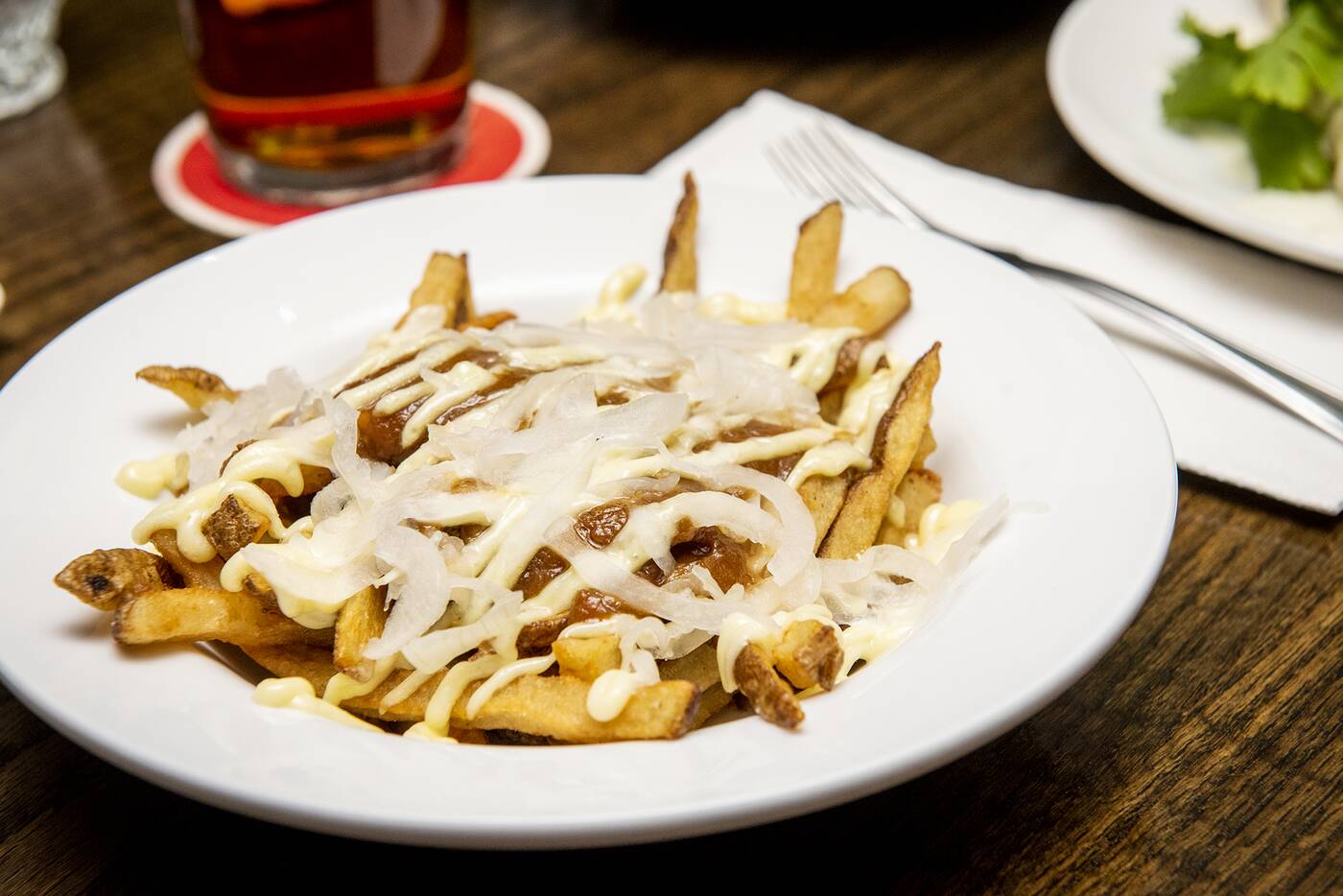 Dutch fries ($8) top scratch house fries with mayo and a thick peanut gravy that’s balanced out by acidic pickled onions. Again, might sound a little strange to the uninitiated, but this is a classic European bar snack. 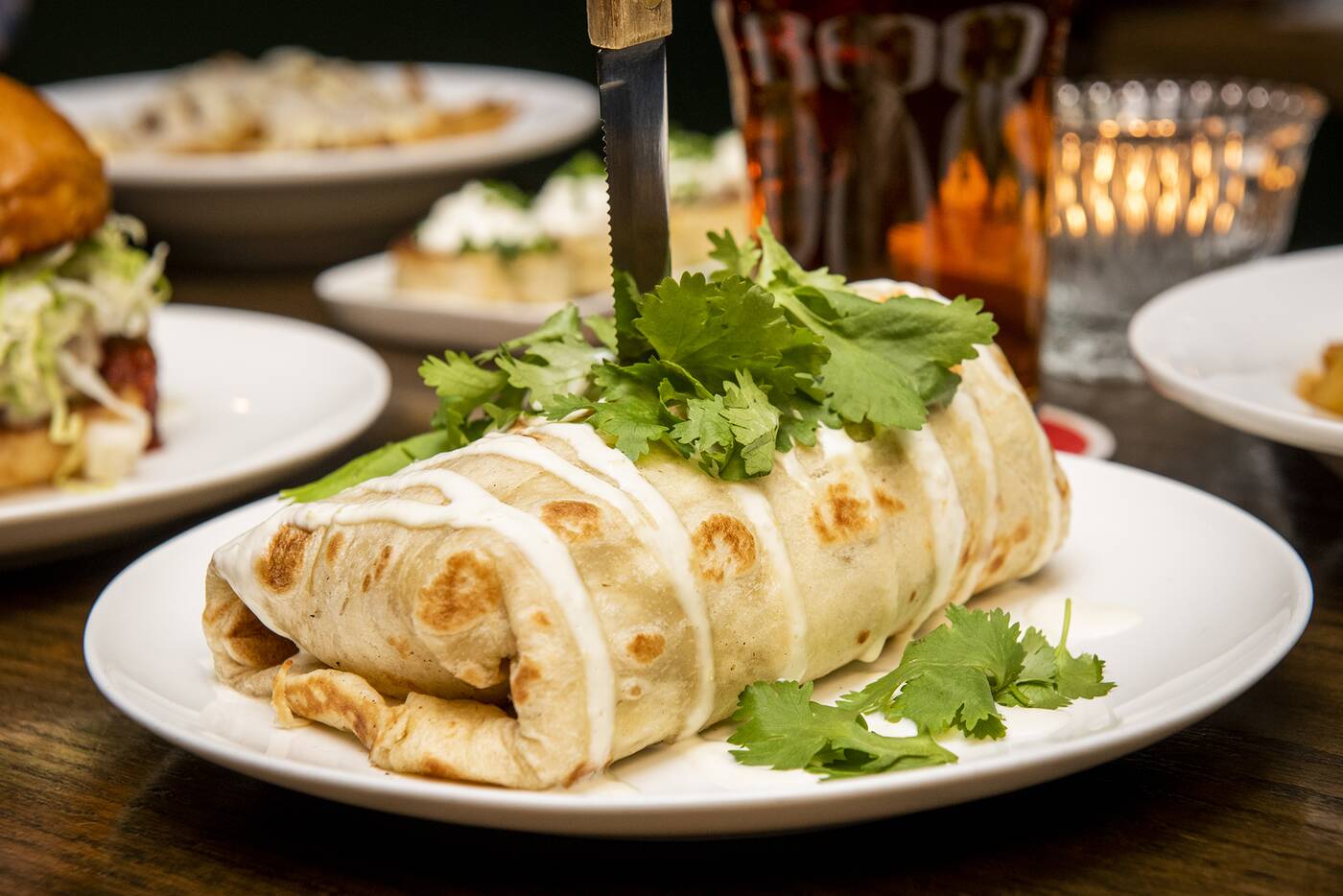 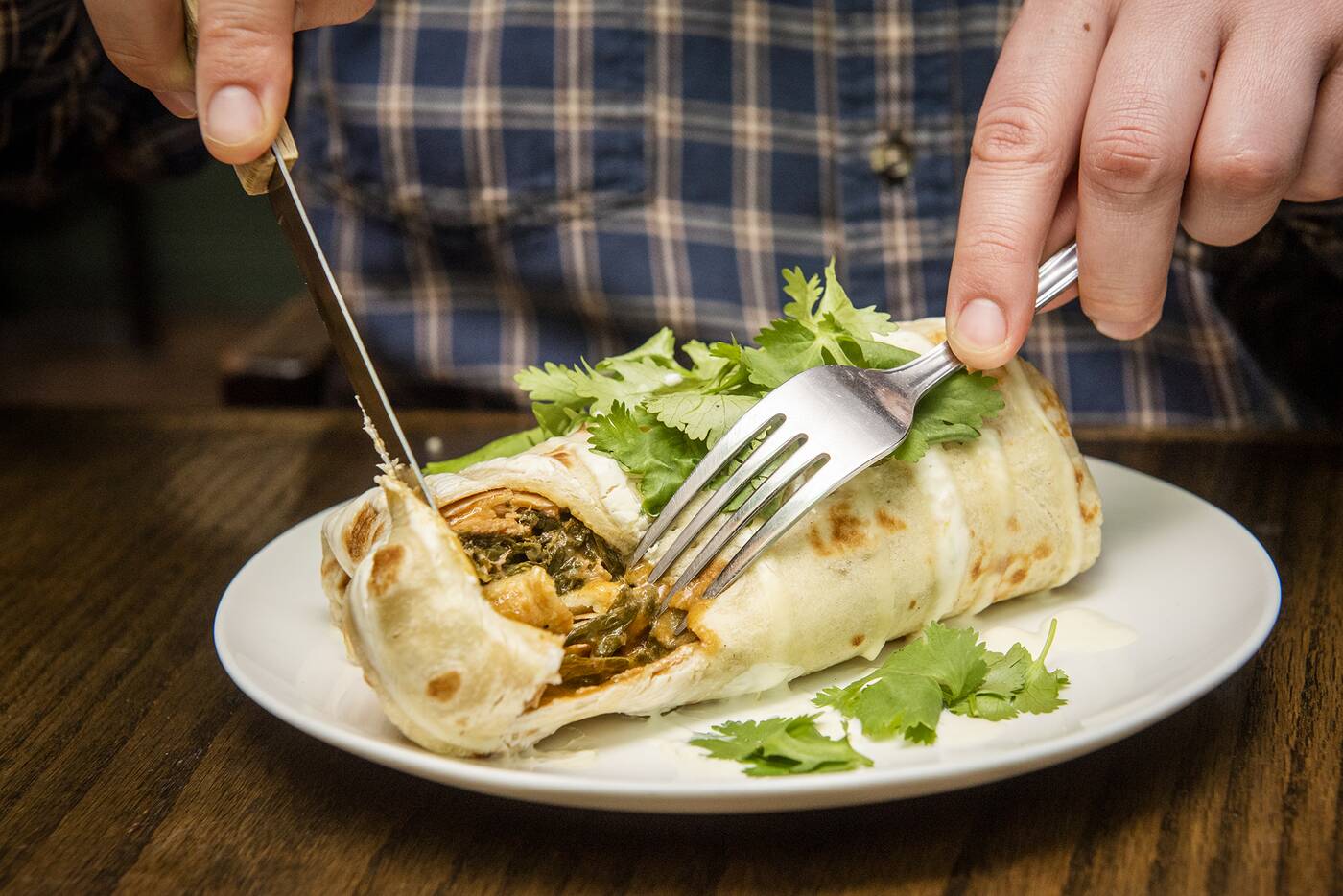 The roti itself is nicely elastic, the curry inside creamy and spicy with potato and collard greens, the entire thing drizzled with raita and scattered with cilantro. 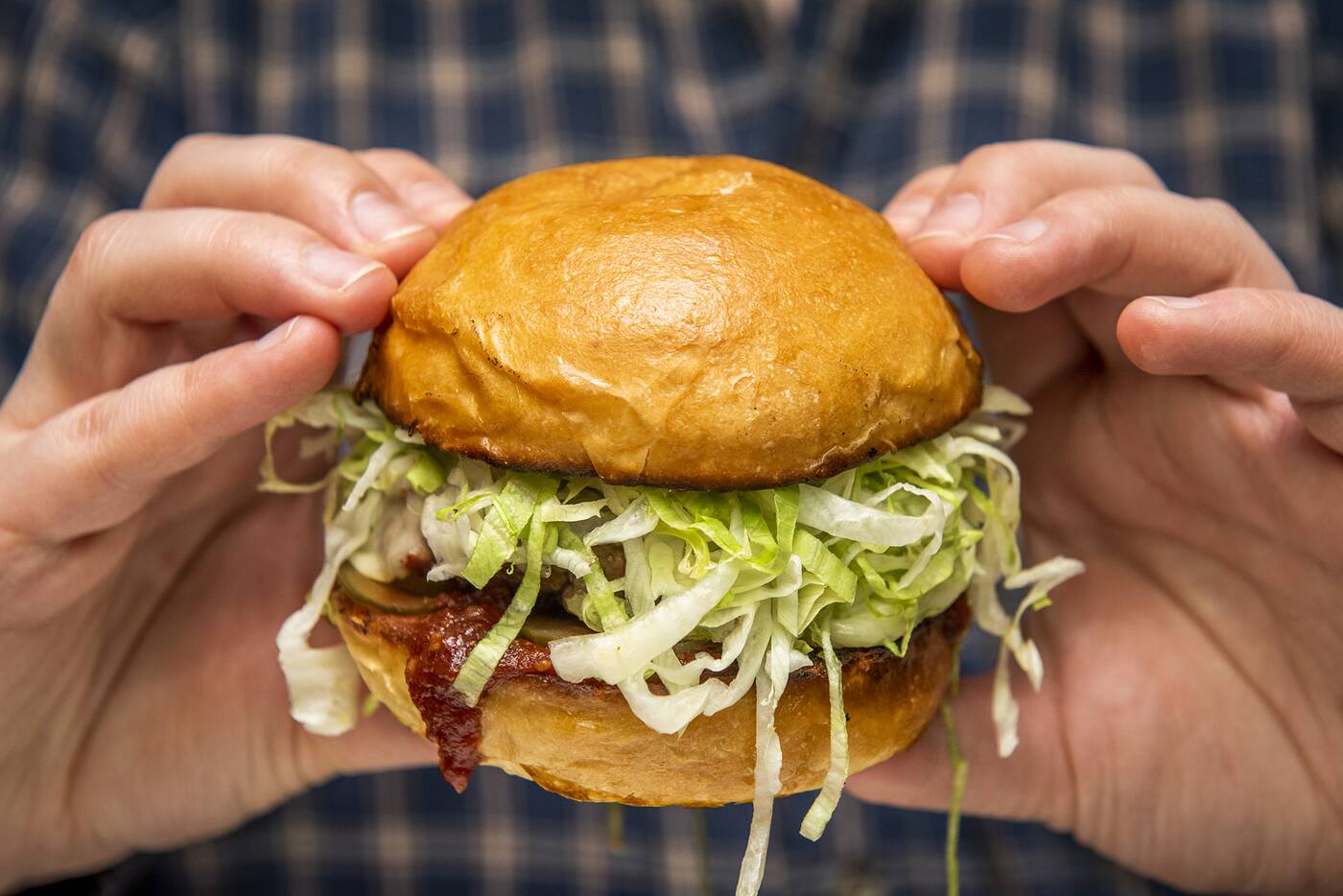 I’m delighted to learn that the cheeseburger ($12) is the same one the chef previously served at now-shuttered Drift, all elements made from scratch and perfectly in balance with one another. There’s also a “Black n’ Blue” burger with blue cheese and cajun spice and a chicken sandwich for the same price.

On a soft, shiny house milk bun seared with clarified butter, the patty is handmade from “secret steak trims” from Gasparro’s. Cheese slices, pickled onions, mayo and tomato jam are also made in house, and a mountain of shredded lettuce adds the perfect level of crispy fast food crunch. You’ll be converted from the first bite. 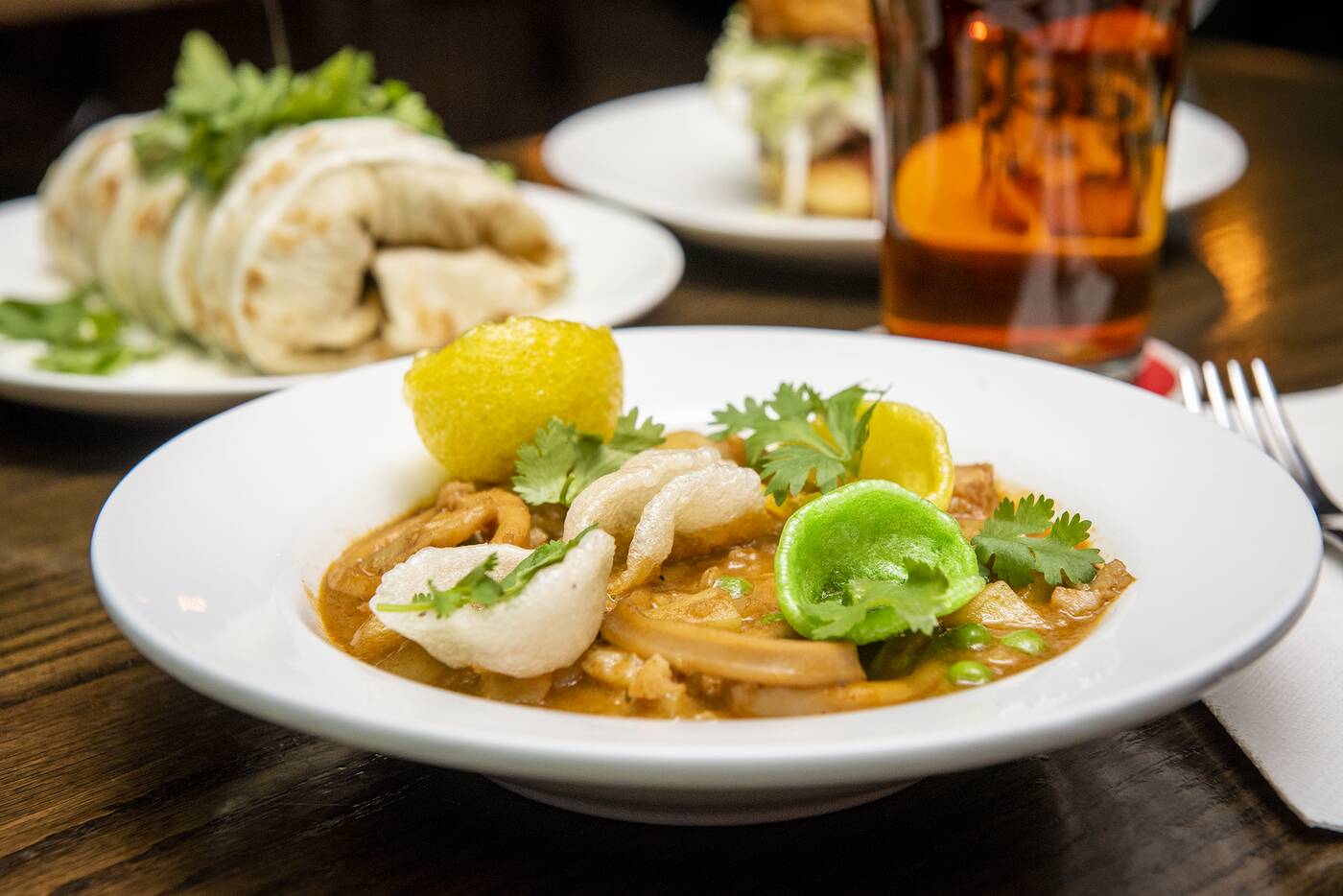 Curry seafood chowder ($10) is inspired by Kleyn’s time at Honest Weight and the epic chowder there, this one warm, creamy and coconut-y with basa, calamari, shrimp, bacon, potato, peas, cilantro and colourful, crunchy shrimp crackers on top. 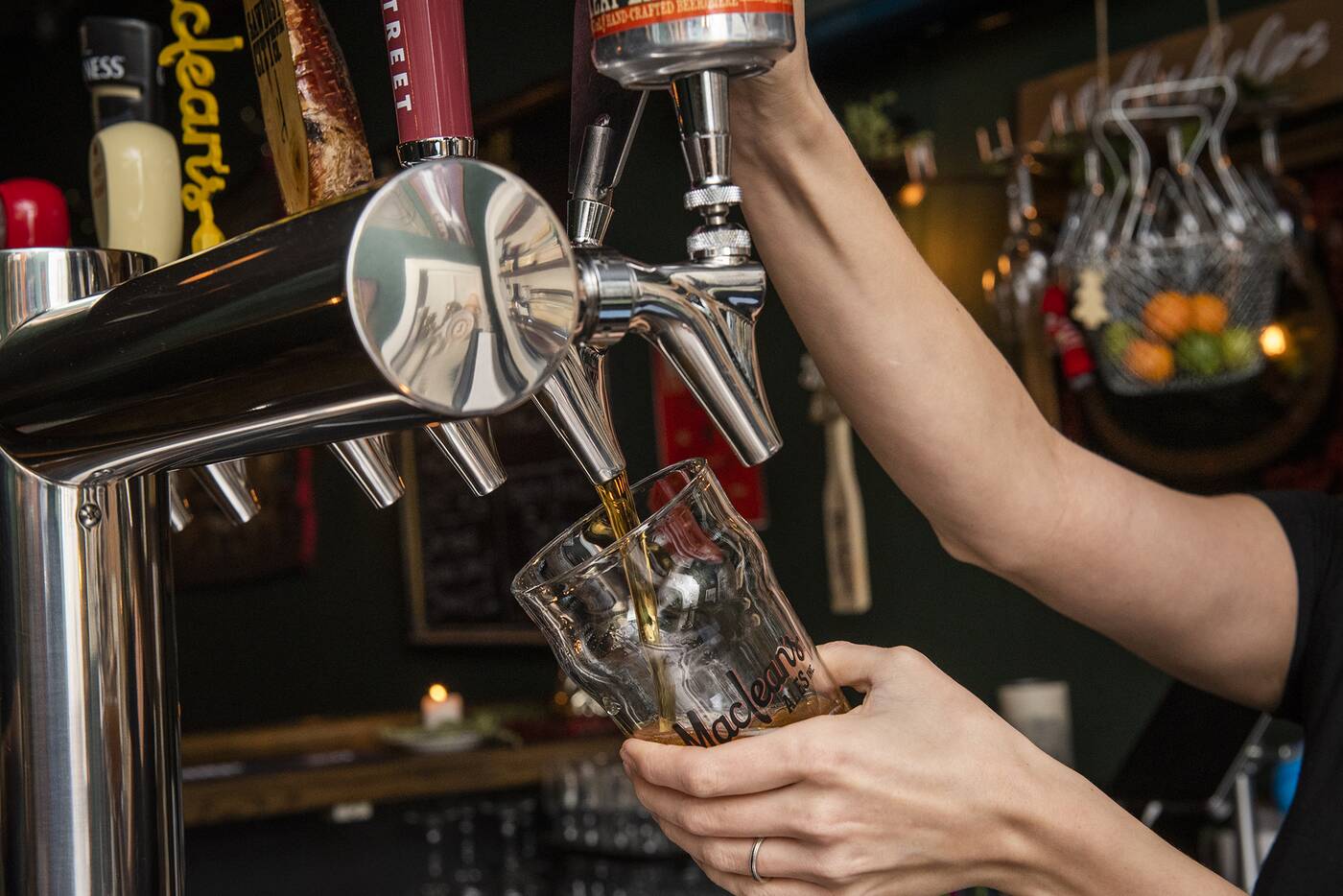 A strong craft beer list includes half a dozen beers on tap plus a rotating guest tap and a cider, over two dozen frequently changing options typically available in bottles and cans. 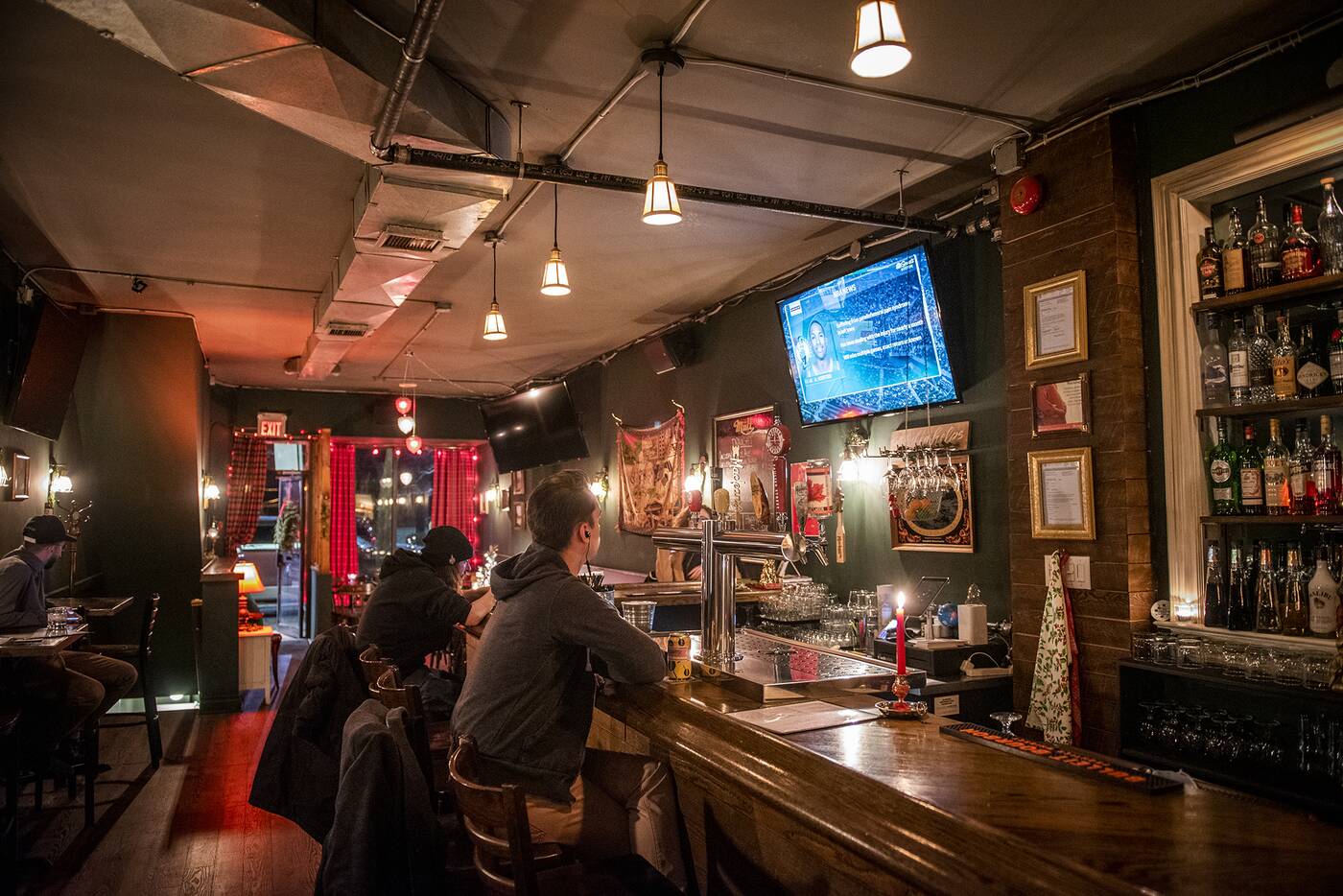 Draft Maclean’s Pale Ale ($8) is the standard, but options range from simpler Modelo and Heineken ($7) to sought-after Omnipollo Zodiak IPA ($8). 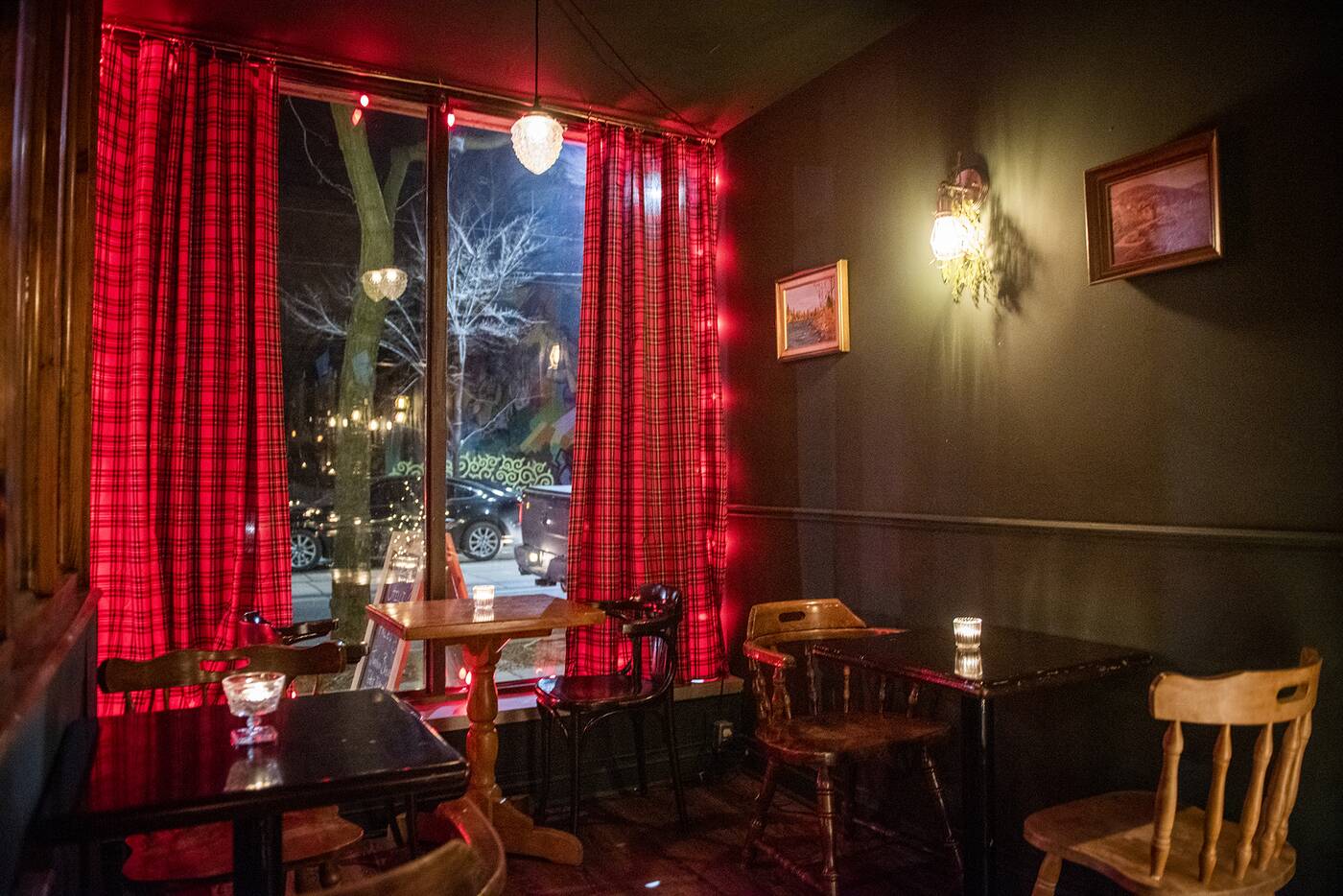 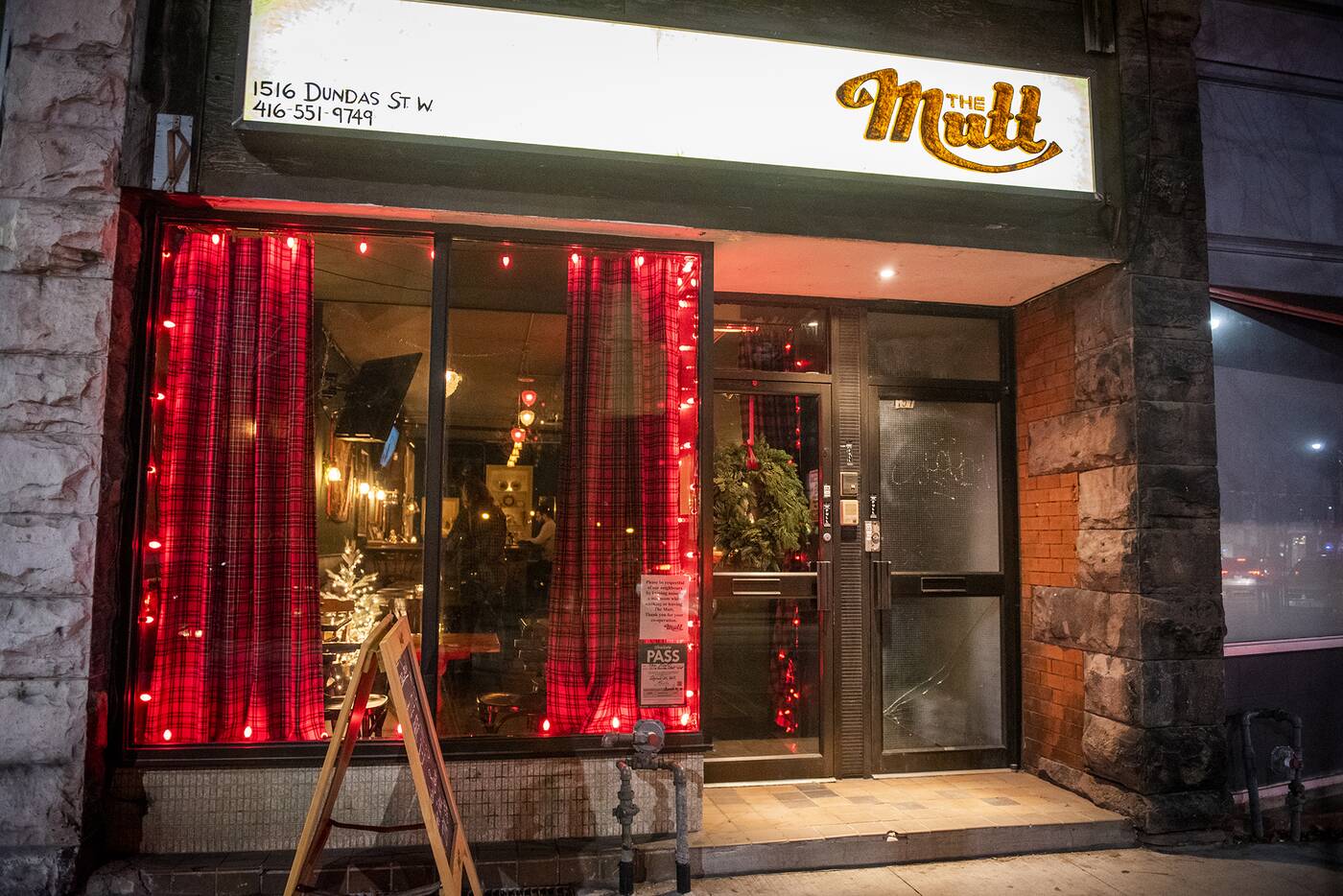