Aura is a cocktail lounge in Toronto serving up theatrical drinks and snack plates.

The opening of the bar came from a childhood dream of owners Andi and Arda Akin, who also happen to be brothers. 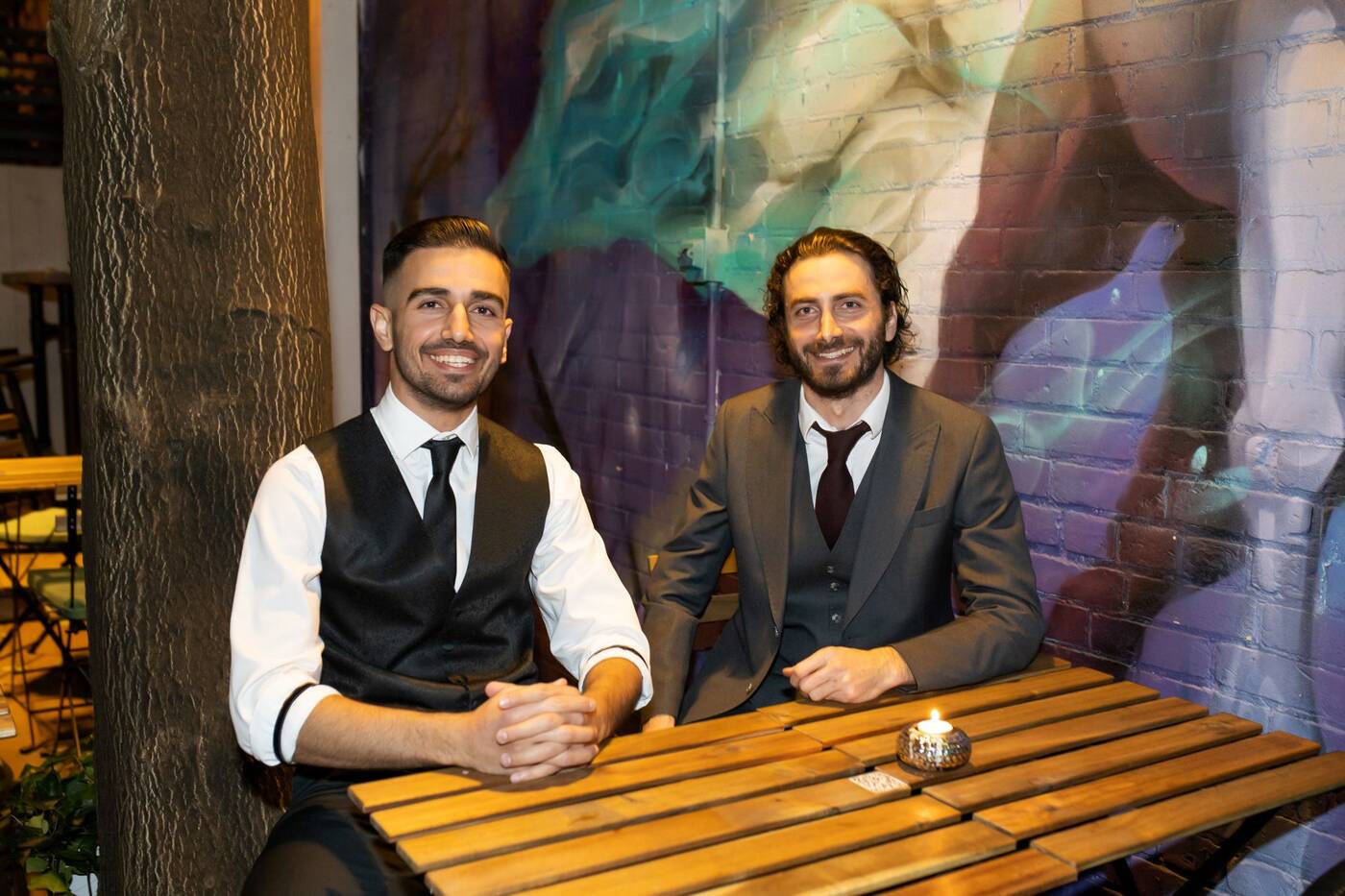 Both of them are originally from Turkey, before coming to Canada, Andi was working as a jewellery engineer and Arda was a ship captain.

Since they were kids, they always talked about living in another country together. In 2019, they both immigrated to Canada, where they got their start in the food industry working at Ozzy's Burgers in Kensington Market. 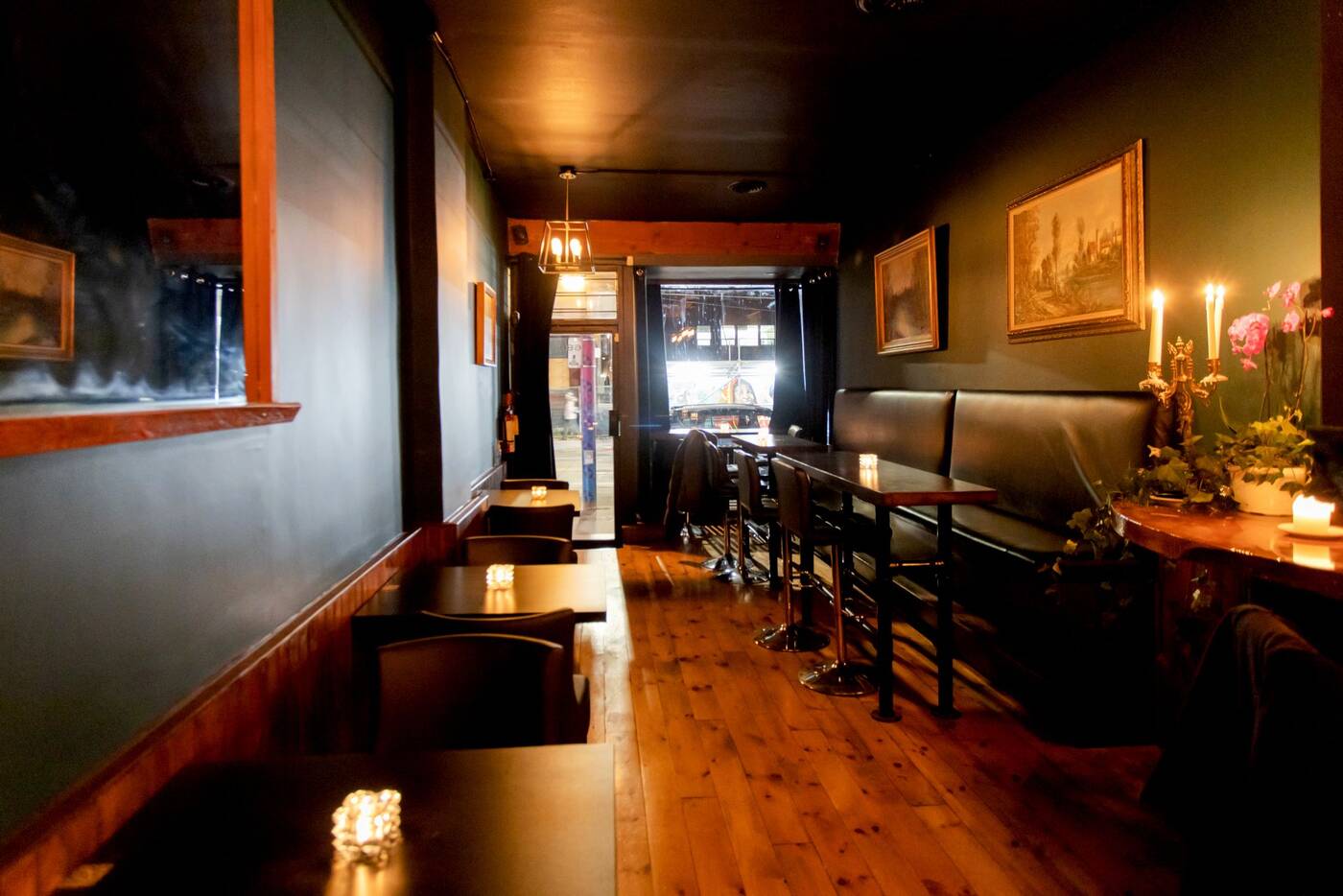 At the time, they were also students, Arda was studying sales and marketing, while Andi was focused on business and customer service.

When lockdowns hit in 2020, the brothers decided to take a risk and finally make their move into owning a bar together.

They chose to open up in Riverside because at the time, it was still a bustling area, despite everyone having to be inside. They also felt it fit with the age demographic they were looking to serve, which is millennials. 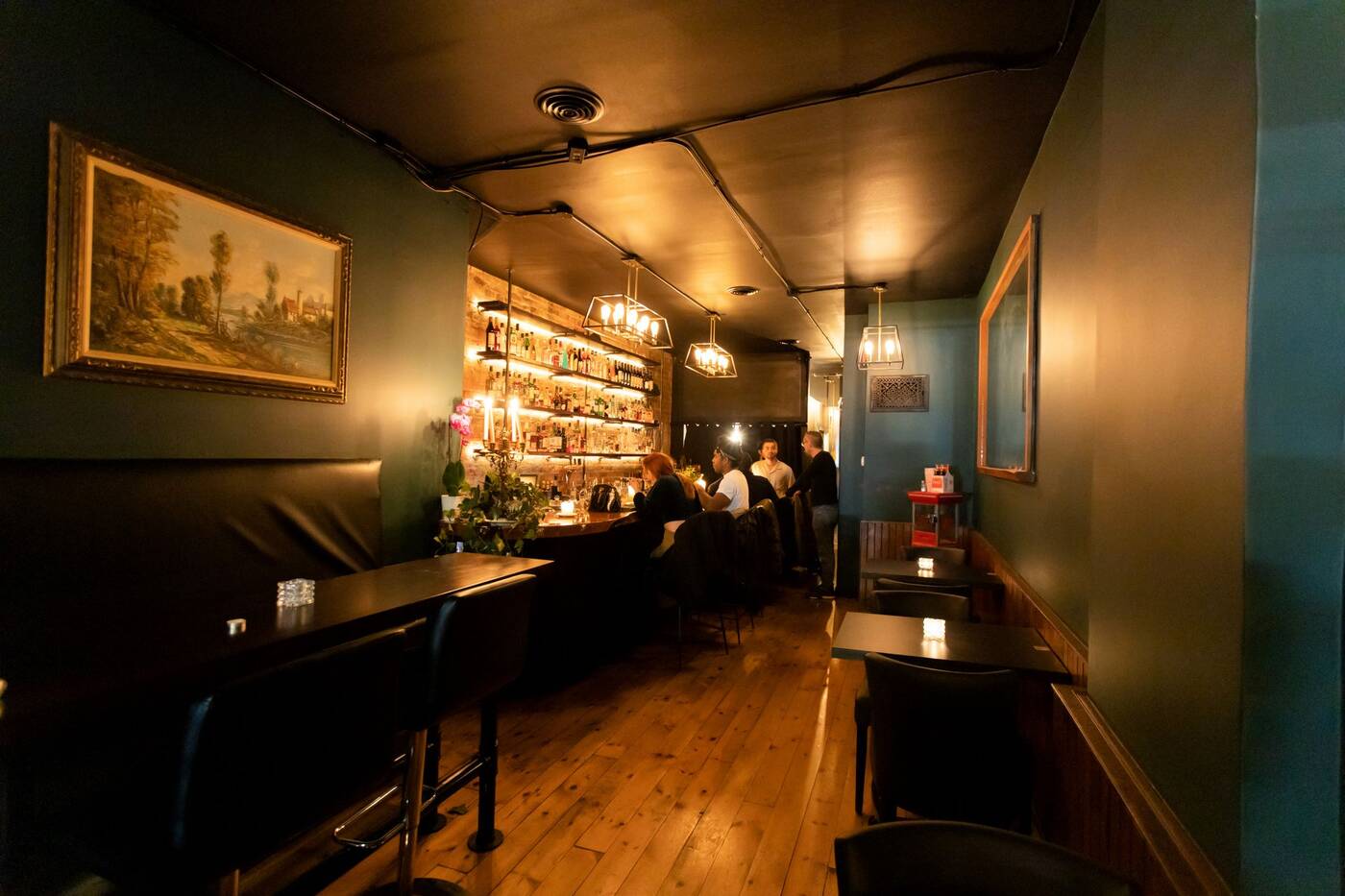 Aura replaces the old location of The John and is not a restaurant. Don't come here if you want to have a full spread of food. They're a cocktail lounge, an intimately lit spot, where you would feel comfortable eating in front of a first date. 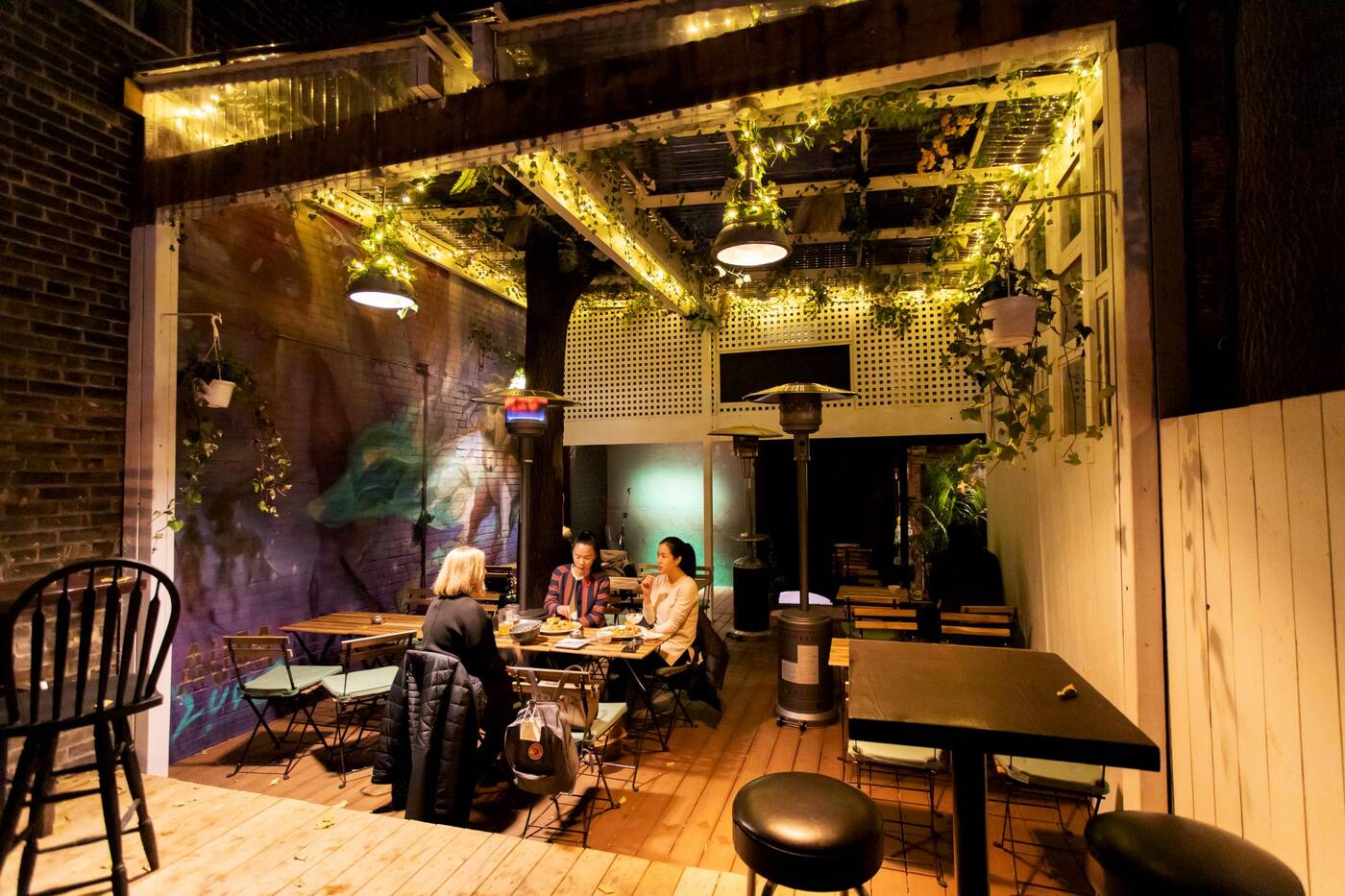 The most sought after feature in the space is the heated patio in the back, decorated with fairy lights, bits of green shrubs and vines hang from the ceiling, giving it quite a romantic feel.

It's a good thing the patio is on the smaller side, when all three heaters are on, it makes it into a heated oasis, where you can feel free to lose your jacket. 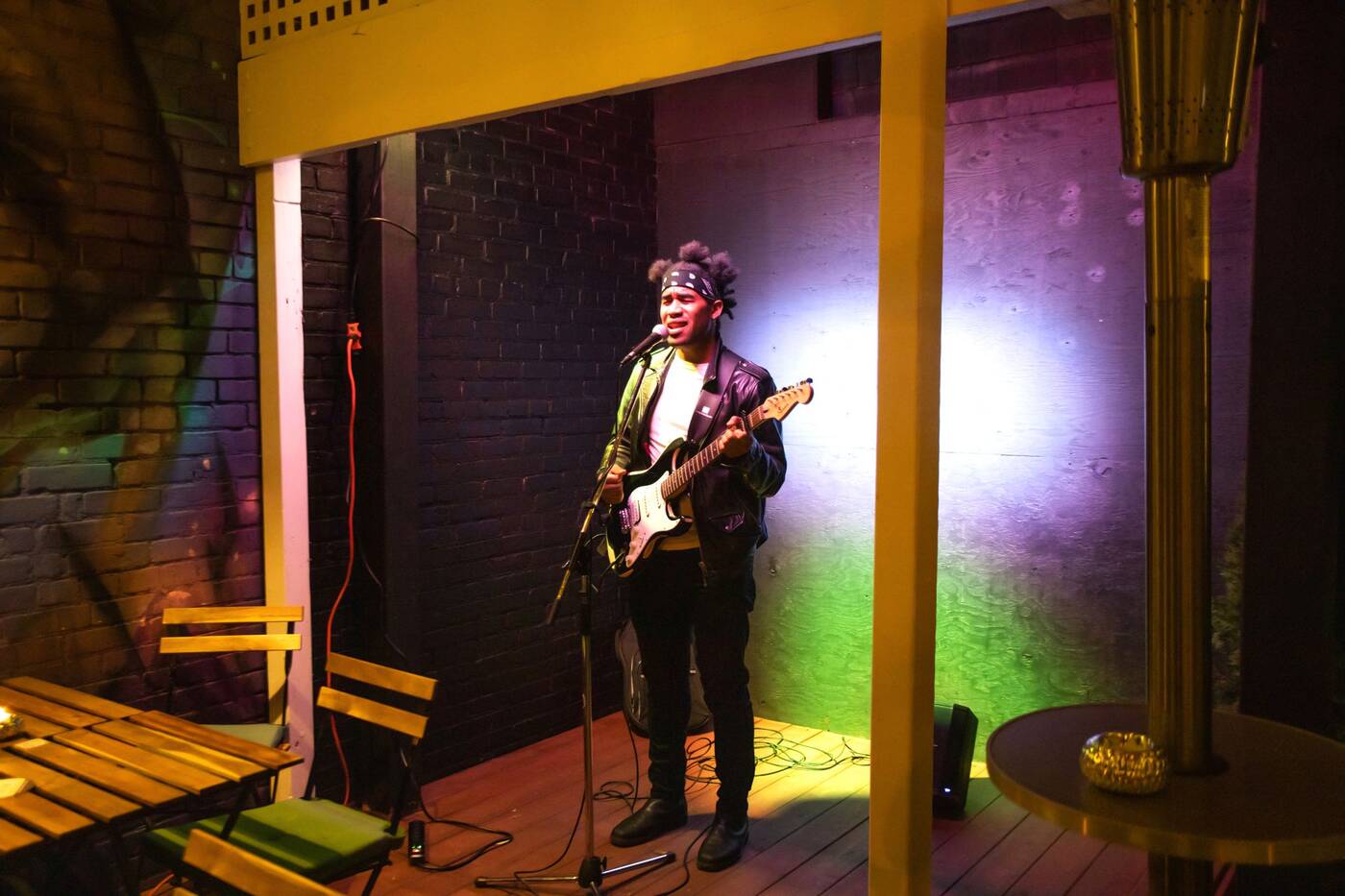 On Wednesday and Thursday nights, Aura hosts musicians who play live on the back patio, the tunes range in genre from world to jazz. 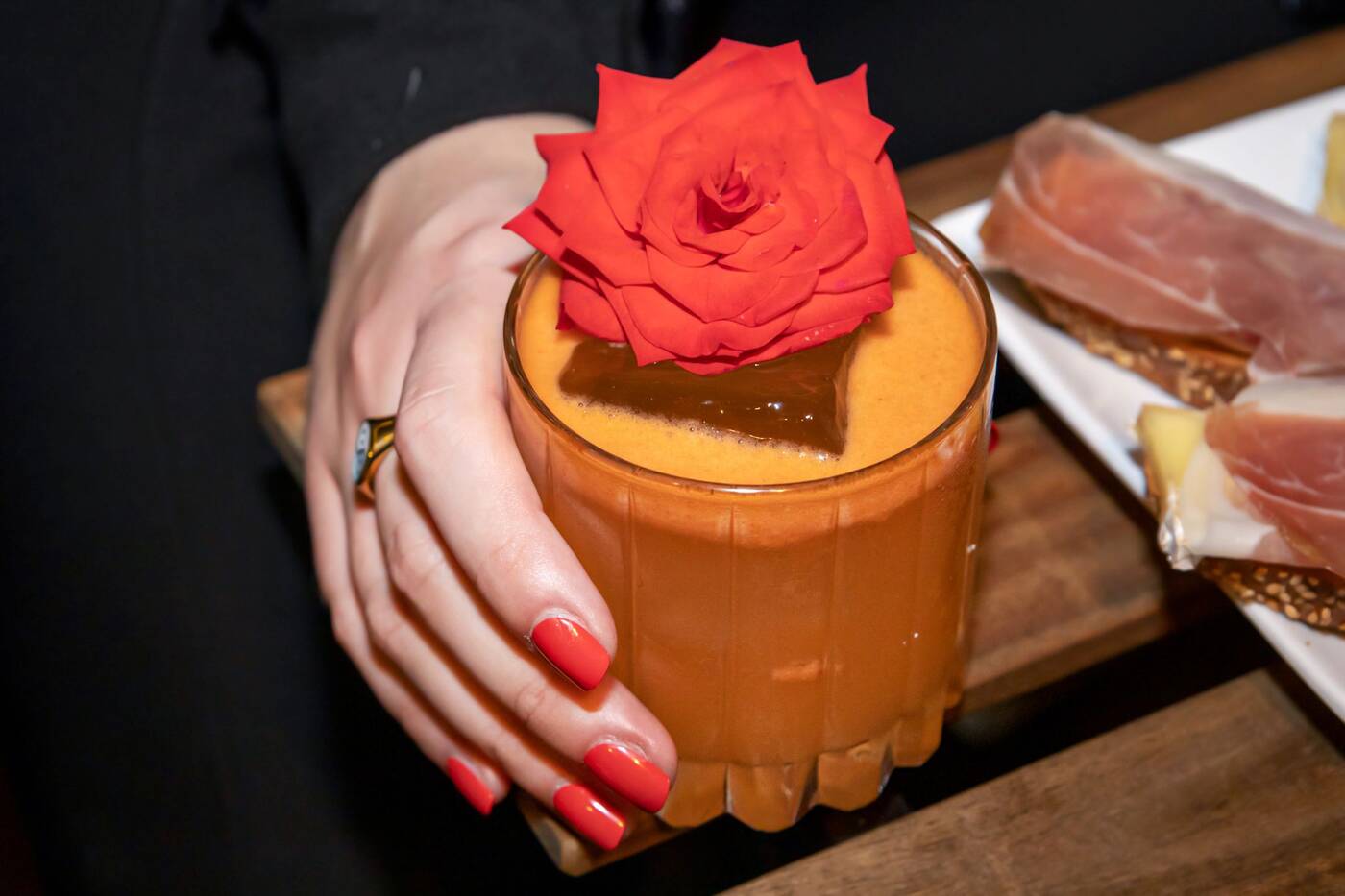 The Scottish Kiss ($20.00) is made with Bowmore single malt scotch, then combined with lemon, simple syrup and Tabasco, giving it a spicy kick to each sip. 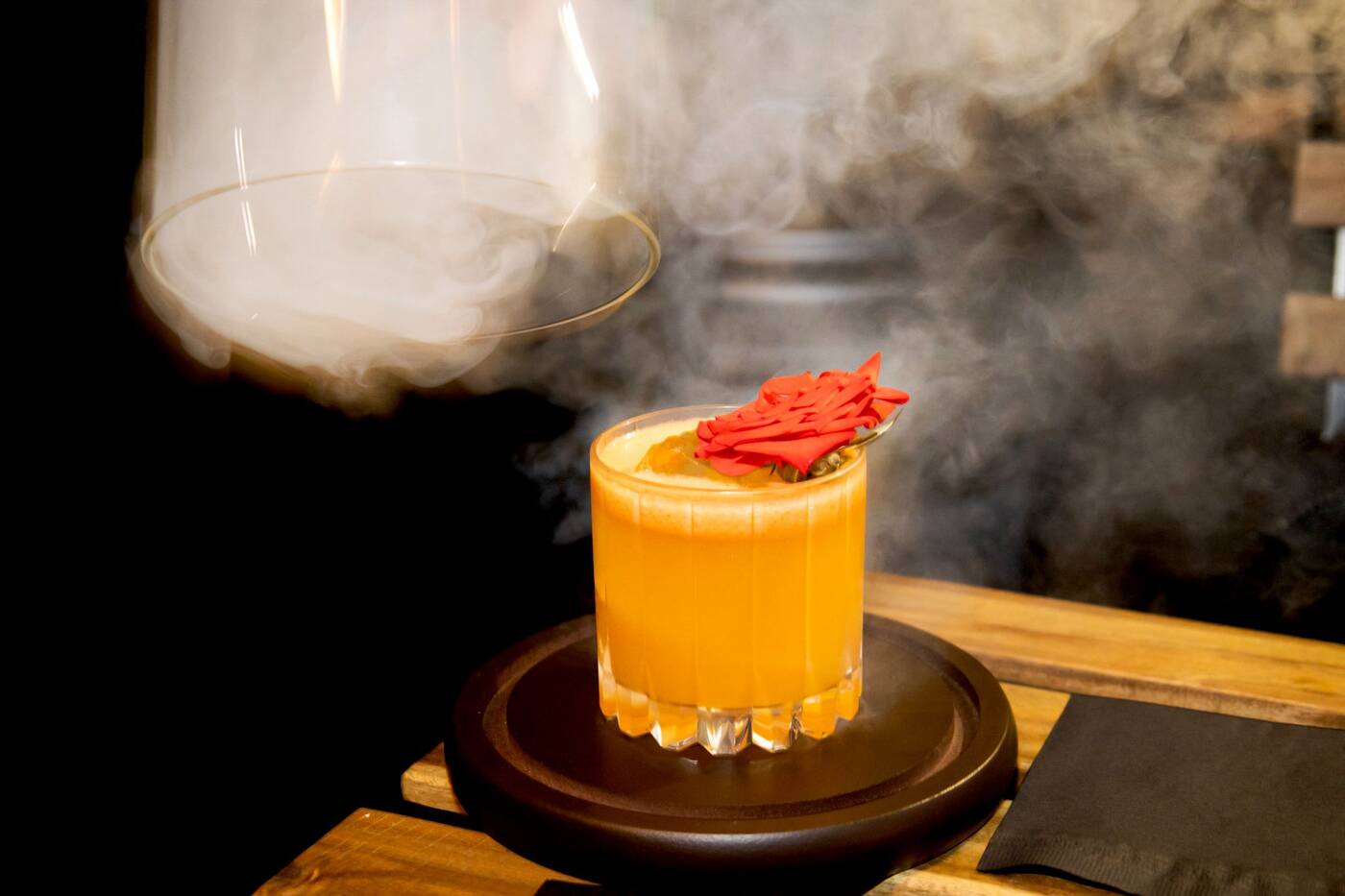 The drink comes to your table in a sealed glass container filled with vapour, when the container comes off, you're left with the smoky after effects, and a beautifully garnished rose flower. 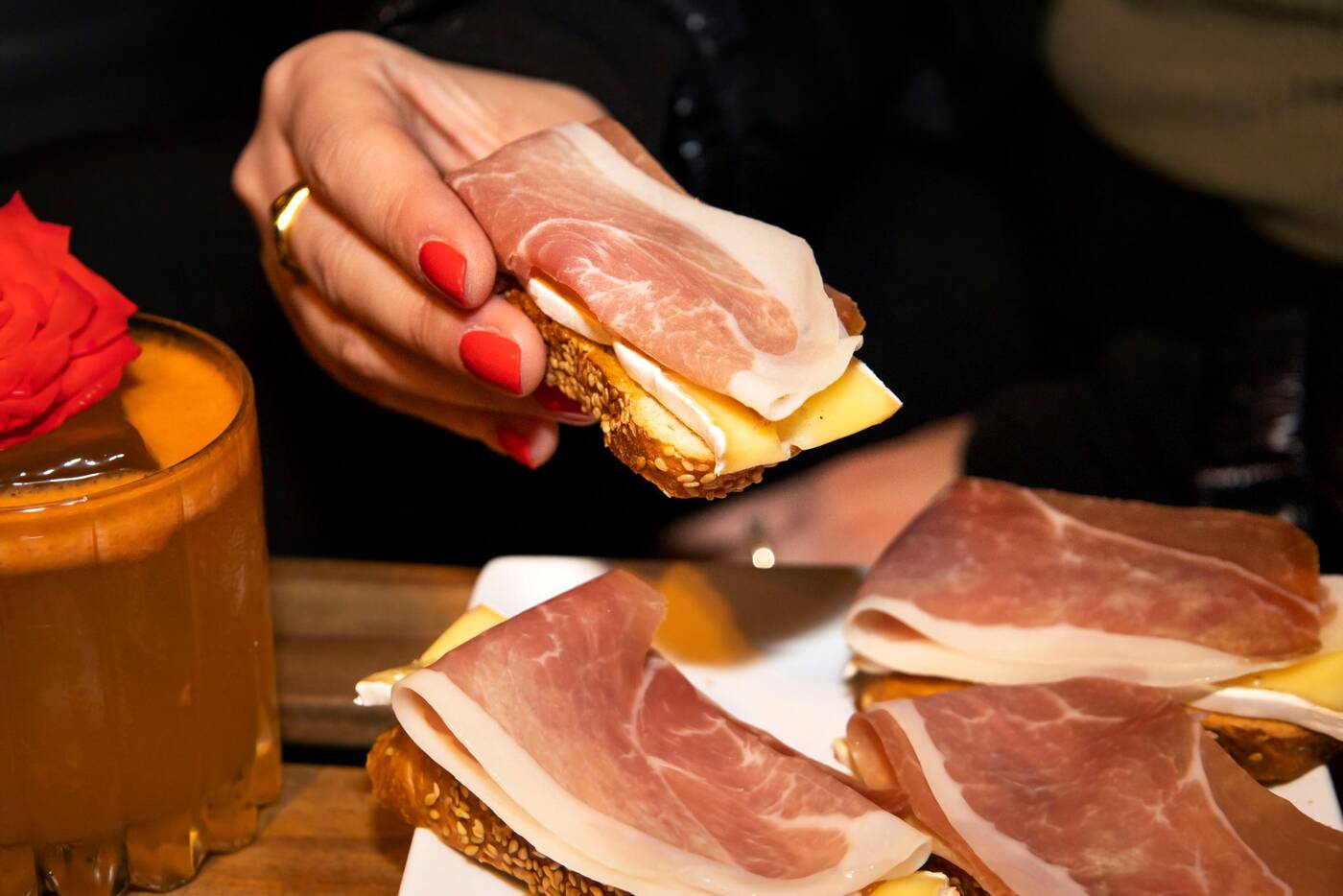 Jamon ($14.00) was my favourite out of the food offerings. The dish comes with four pieces of Vienna bread with apricot jam spread on top. Then pieces of Brie cheese and a thick layering of prosciutto finishes it off. It has a delicious contrast of both sweet and salty flavours. 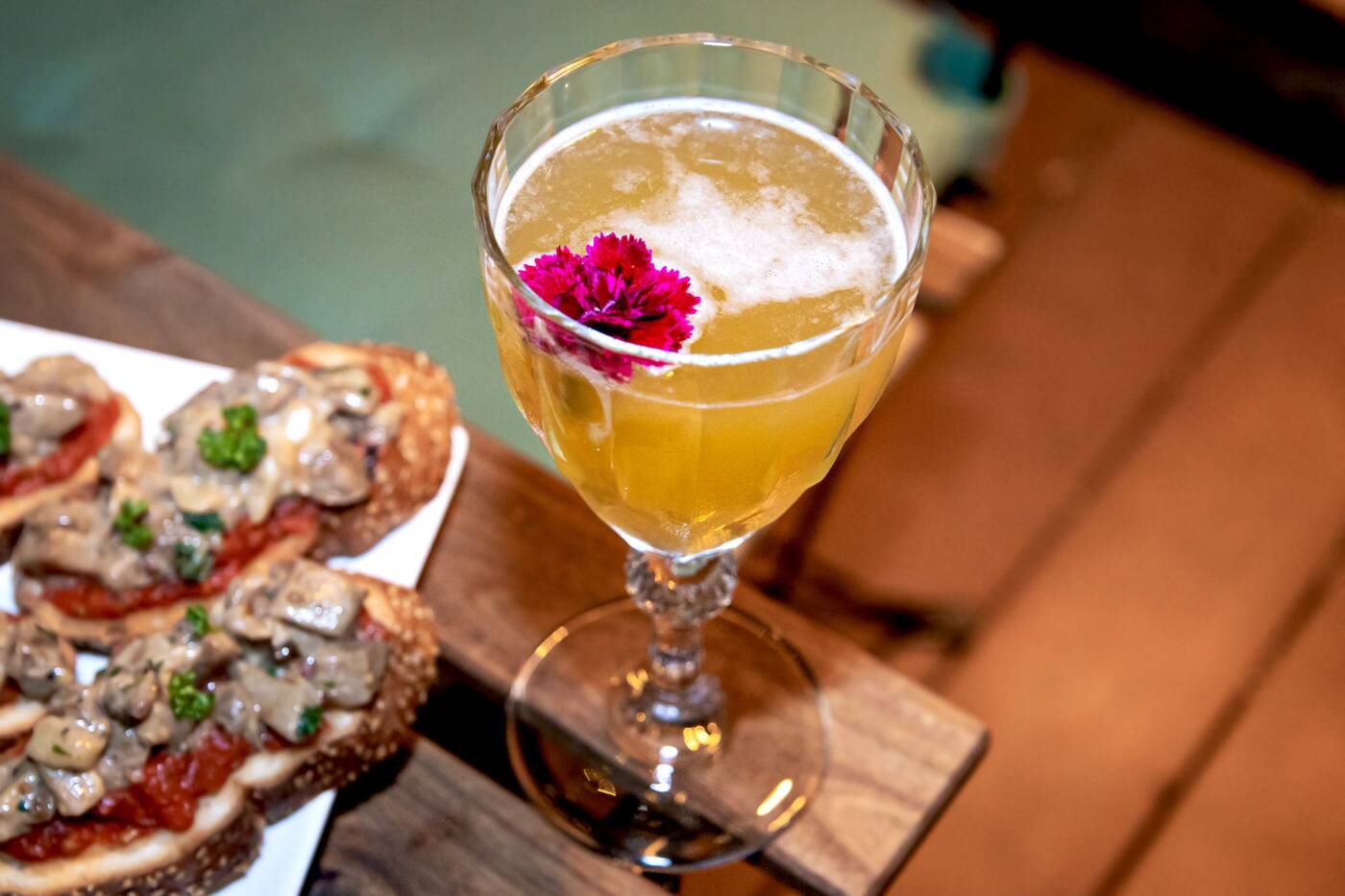 The Pendennis No A ($17.00) has a base of Tanqueray gin which is infused with jasmine. The bar makes its own version of a vermouth with real apricots for flavouring. The drink is shaken with lime syrup and Peychaud's Bitters, adding a sweet aroma to the overall drink. 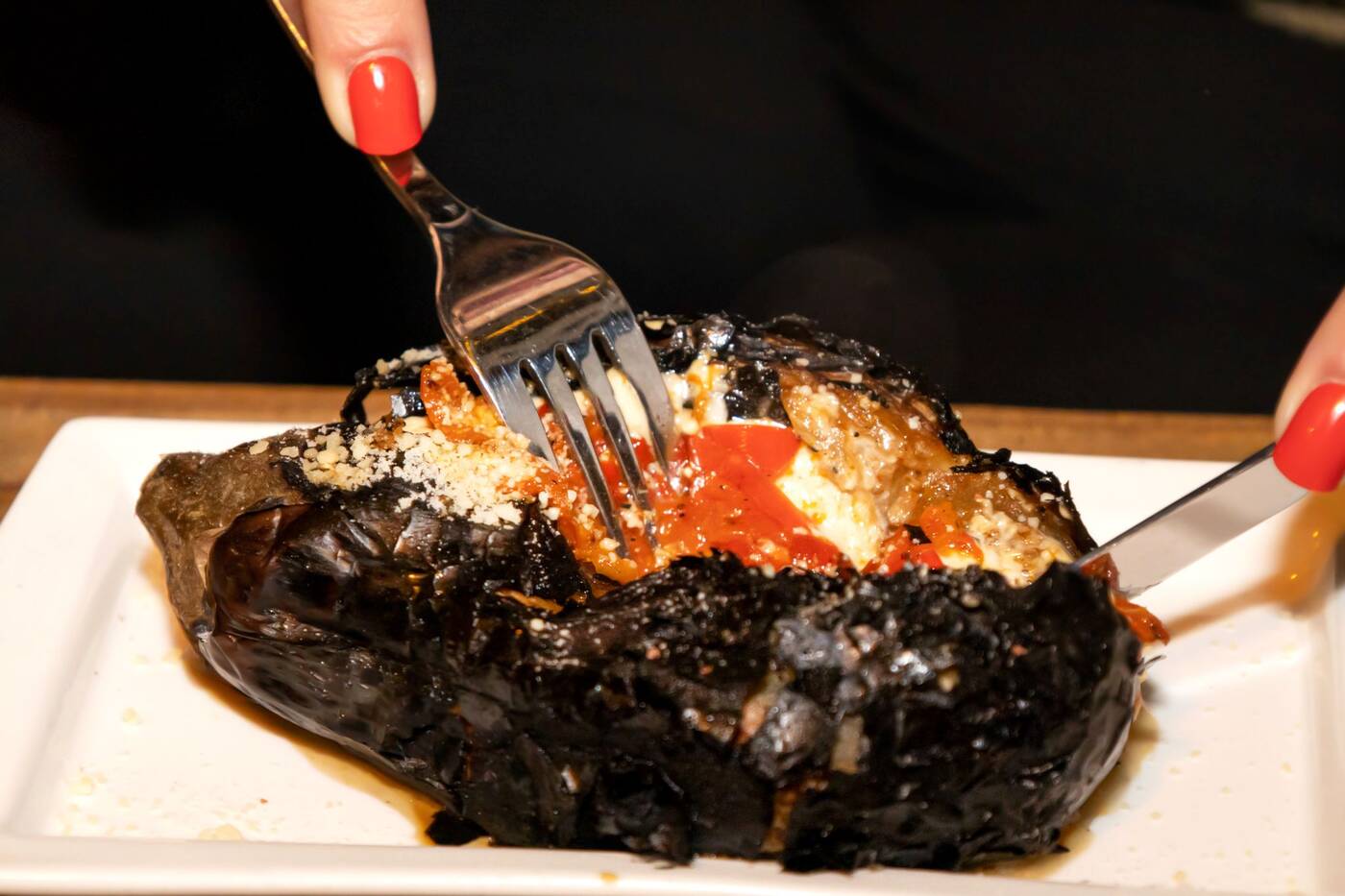 Berenjena ($16.00) is a grilled eggplant that comes in two pieces. Tomato, garlic, onion, and sprinkling of feta cheese is stuffed inside. The soft filling is much needed to balance out the crispy exterior of the vegetable. 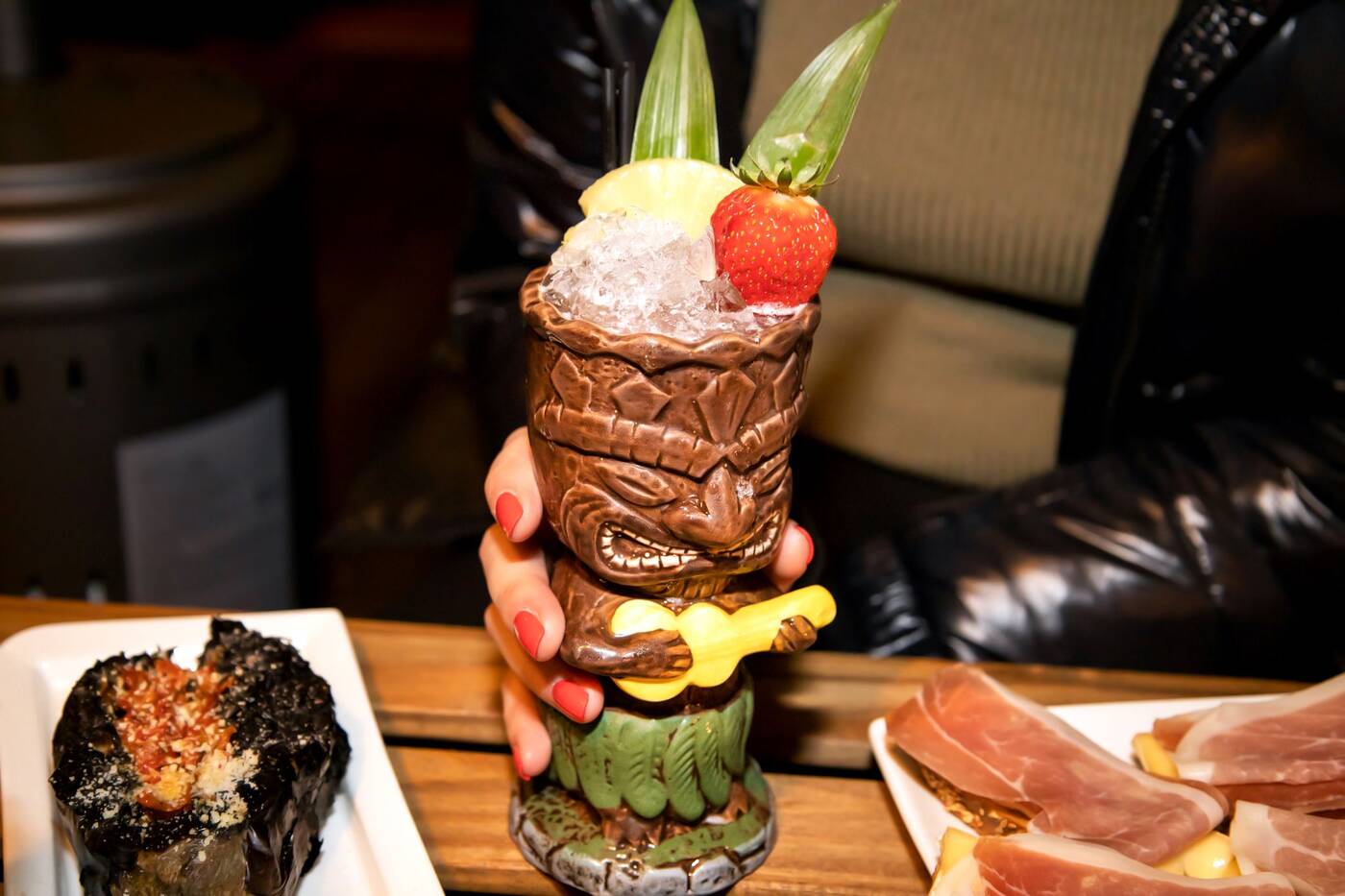 The Maria Galante ($18.00) has just enough sweet to it, while still being refreshing. A blend of aged rums is infused with coconut,then combined with lychee liquor, triple sec, and garnished with a strawberry and a real pineapple slice. 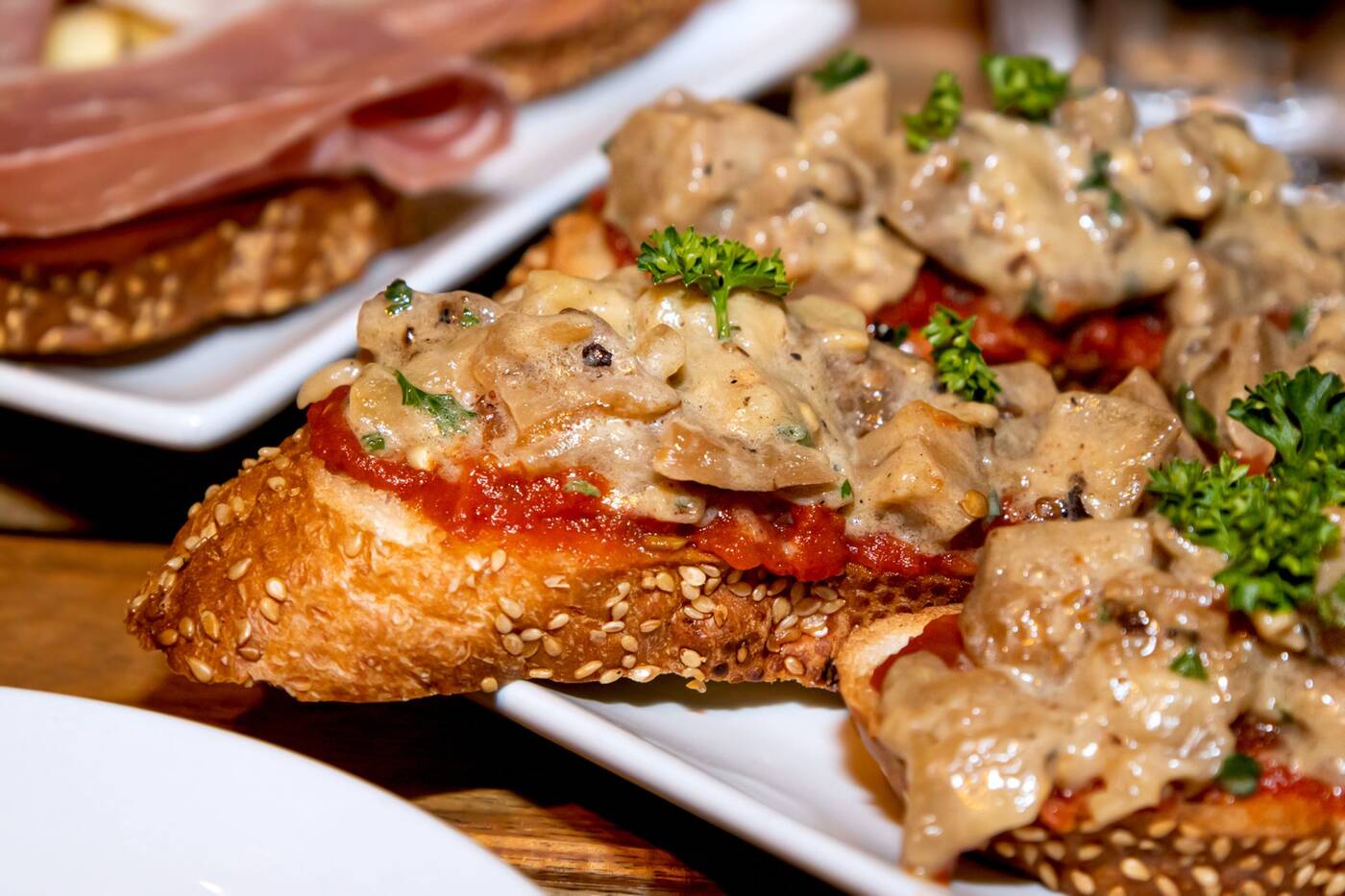 The Berenjena Especiada ($16.00) has four pieces of Vienna bread with a tomato spread at the base, a creamy mixture of spiced eggplant, olive oil, and garlic is added on top with parsely to garnish. 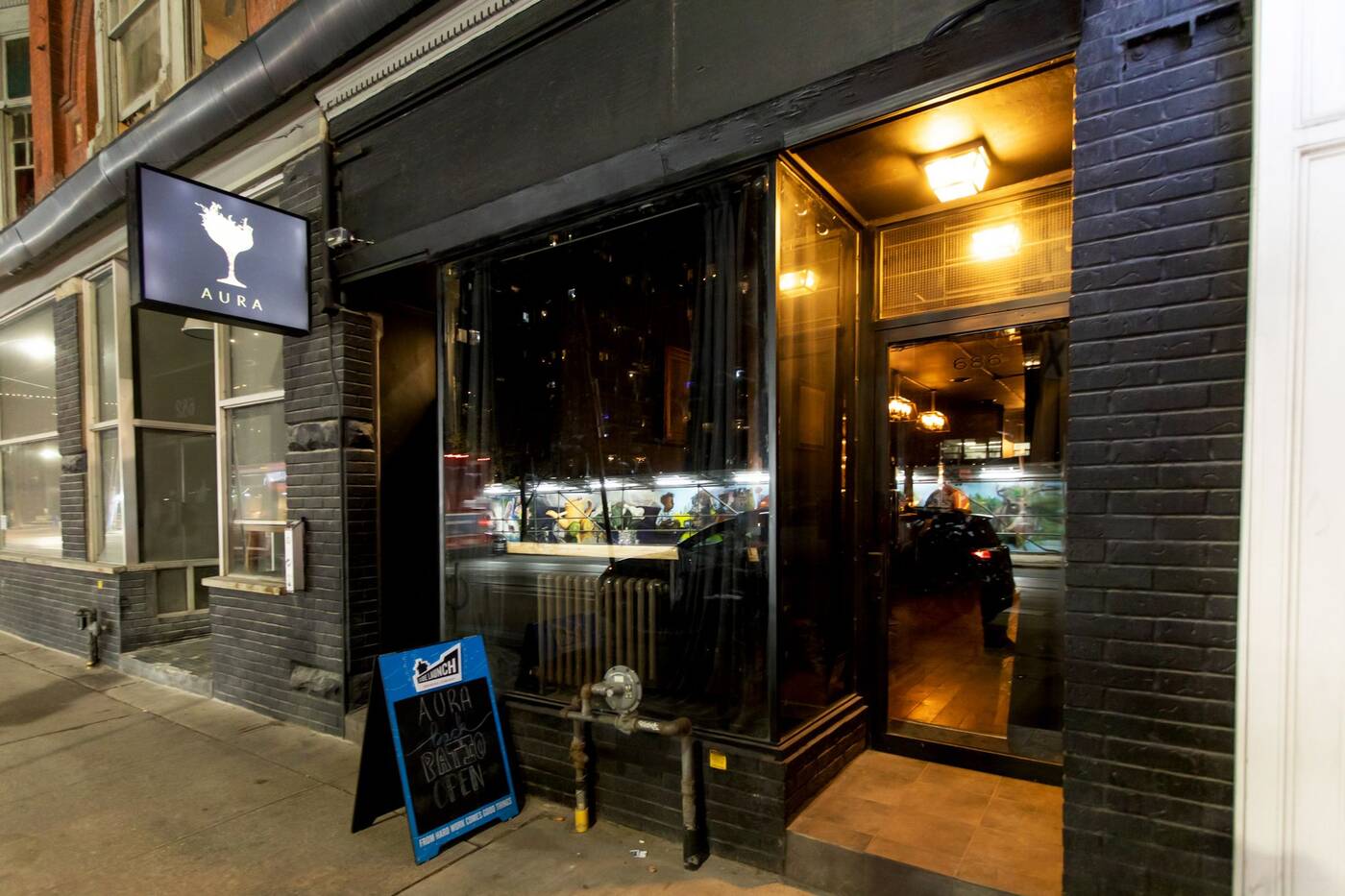 There's an inviting glow of golden light that seeps out of the entrance at Aura. A splashing cocktail glass can be spotted on the bar's sign out front near Queen and Broadview.