The history of the World's Biggest Bookstore in Toronto

I attended high school in the 1950s, when the Ontario Government did not pay for high school texts. On the Tuesday following Labour Day, my friends and I attended Vaughan Road Collegiate to discover which homeroom form we had been assigned, and to pick up a list of the texts that were required for the year's studies.

Following this, we visited the Coles bookstore at 720 Yonge Street. Coles possessed the largest supply of secondary school texts in the city, so it was possible to purchase all the books we needed in a single visit.

The other advantage, was that Coles purchased used texts and resold them at a discount price. This often saved us money.

In 1953, I had a summer job at the Imperial Bank near Yonge and Bloor, next door to the Pilot Tavern. On my lunch hour, I often strolled south on Yonge to the Coles store at 720 Yonge Street.

I soon discovered that in the section displaying art books, there were photographs of naked figures, which art students employed for drawing the human form.

Being a teenager, I was far too embarrassed to ever buy one of the books, but they were great to peruse for a cheap thrill. I always gazed around to be certain that no one was aware of the books I was looking at.

Coles was a vital part of Toronto during the days before Amazon and the internet. In 1935, Carl E. Cole and his brother Jack, opened a second-hand bookstore near Bloor Street and named it Cole Books.

In 1937, they purchased the Robert Barron property at 720 Yonge Street and opened a larger store. In 1948, they began publishing Coles Notes, which provided detailed and simplified notes about various topics that related to the secondary school curriculum.

Student who had failed to keep proper notes during classes often bought them when exam time arrived. This is why they were often referred to as "cheat books." Eventually, Coles Notes covered about 120 titles.

Due to increased book sales, in 1952, they extended the store into the shop next door, and eventually opened other stores across Canada.

In 1974, the Barron Building that housed the store, was declared a Heritage building, as it had been built in 1889. 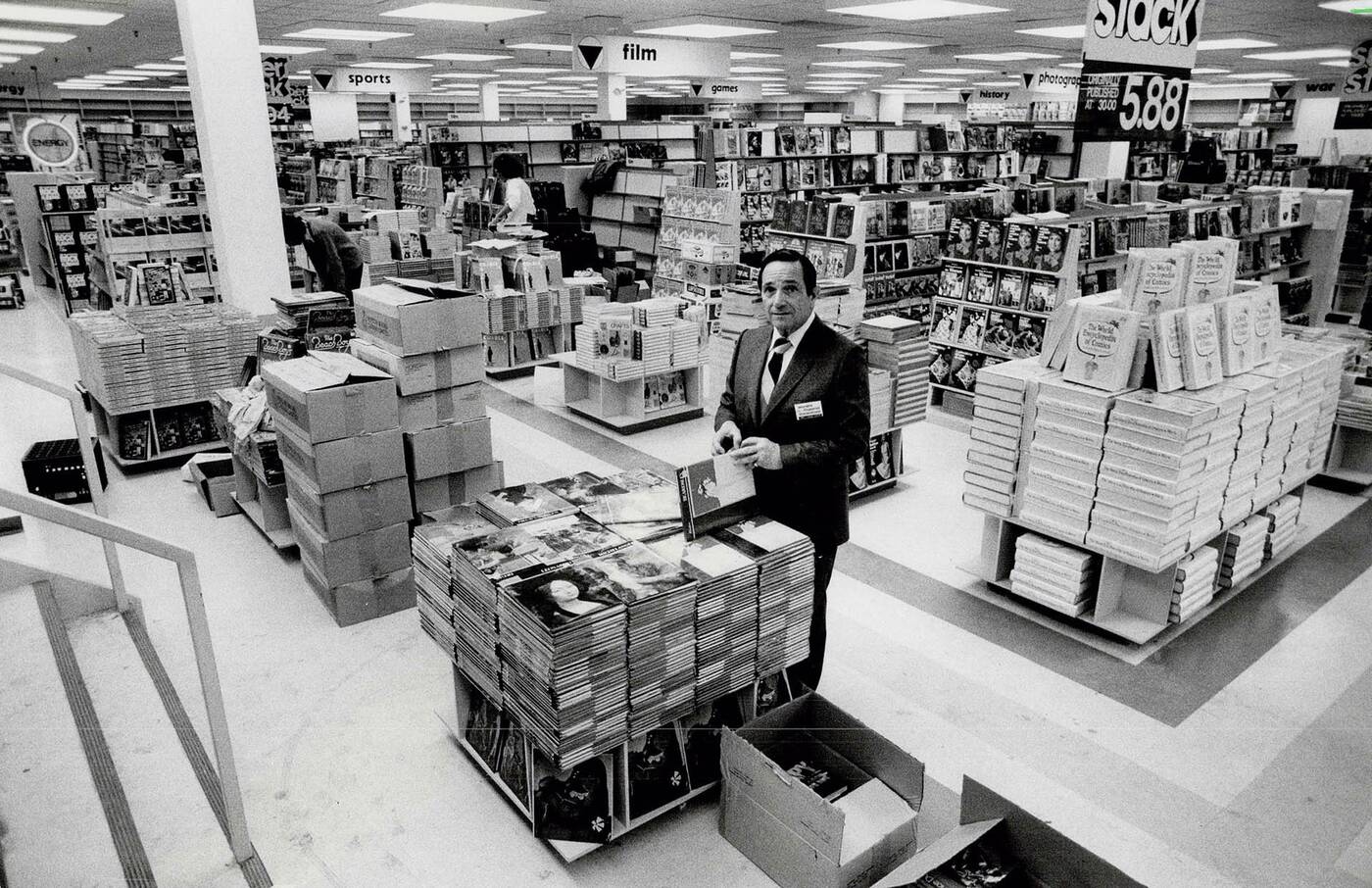 In 1980, Coles opened a 67,000 square-foot book store at 20 Edward Street, a short distance west of Yonge Street. They named it, The World's Biggest Bookstore, and though its name was not truly accurate, it was one of Canada's first book superstores.

It had previously been the site of the Olympic Bowling Alley, which was architecturally an enormous box-like structure. The store contained two storeys, was brightly lit, and had garish yellow walls.

Despite these features, it contained small intimate areas, where customers could examine books before deciding whether or not to purchase them. It's a pity that the store at 720 Yonge Street did not possess these spaces when I was a teenager ogling nudie books.

Because the store remained open late into the evening hours, people sometimes browsed for an hour or more. The store was located not far from A&A; Records and Sam the Record Man, which also attracted late-night customers.

Thus, the World's Biggest Bookstore was an integral part of the night scene on Yonge Street. I personally liked the store as I was able to find books by authors that other stores did not stock. I also purchased many books that were deeply discounted.

The store had large bins with books that were half-price or more, and clearance sales were frequent. The store eventually carried gift cards, souvenirs, stationery, and even toys.

However, with the introduction of the internet and the rise of e-books, the store on Edward Street was too large to remain profitable. It is a wonder that it lasted as long as it did. 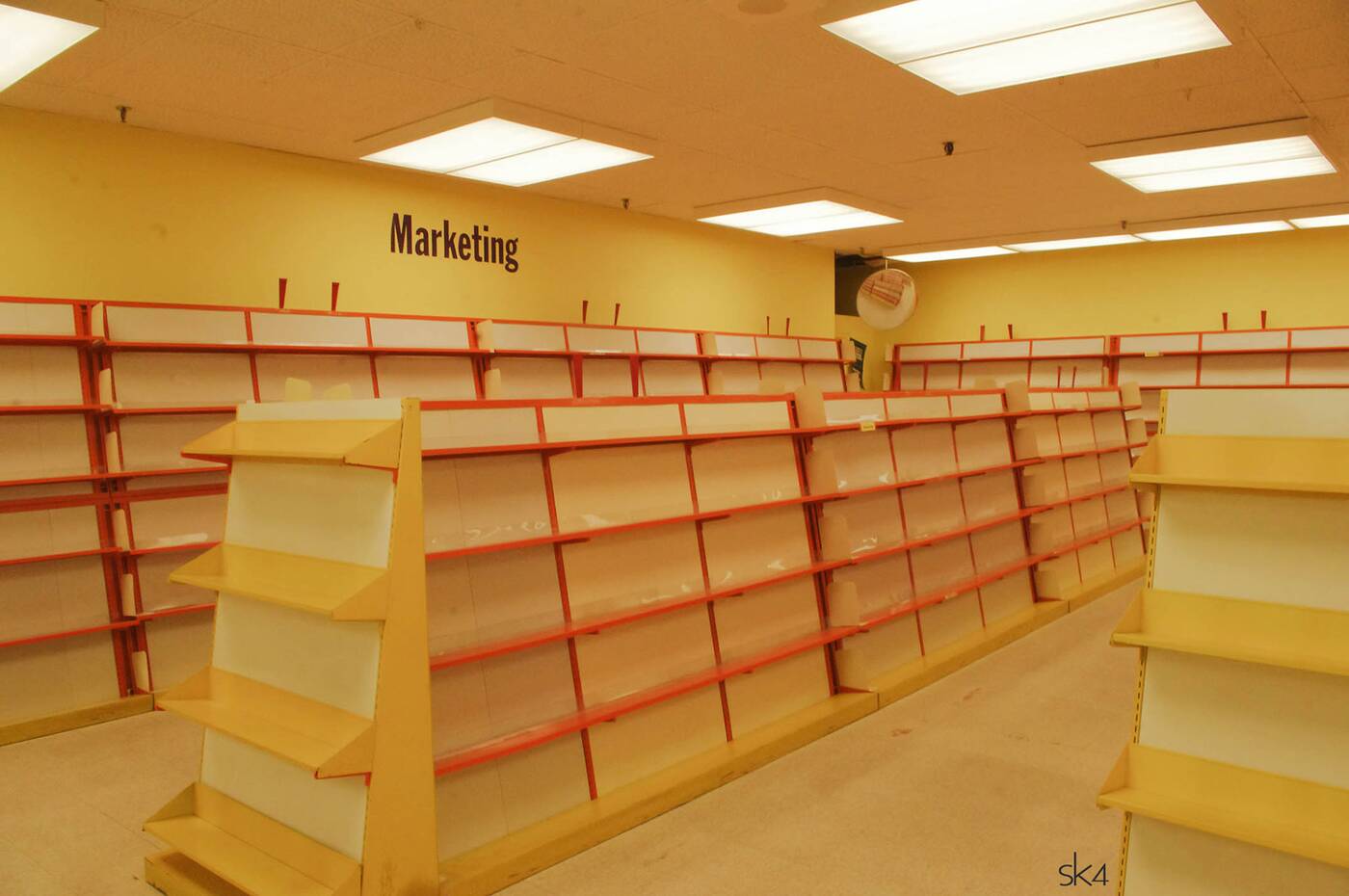 The World's Biggest Bookstore, two days before it closed for good. Photo by Saku Takakusaki.

The building was sold to a real estate developer in February 2013, and the store was closed on March 30, 2013. The building was demolished to create a row of restaurants.

Personally, I felt that the city was diminished when The World's Biggest Bookstore closed. I spent many happy hours wandering its aisles. 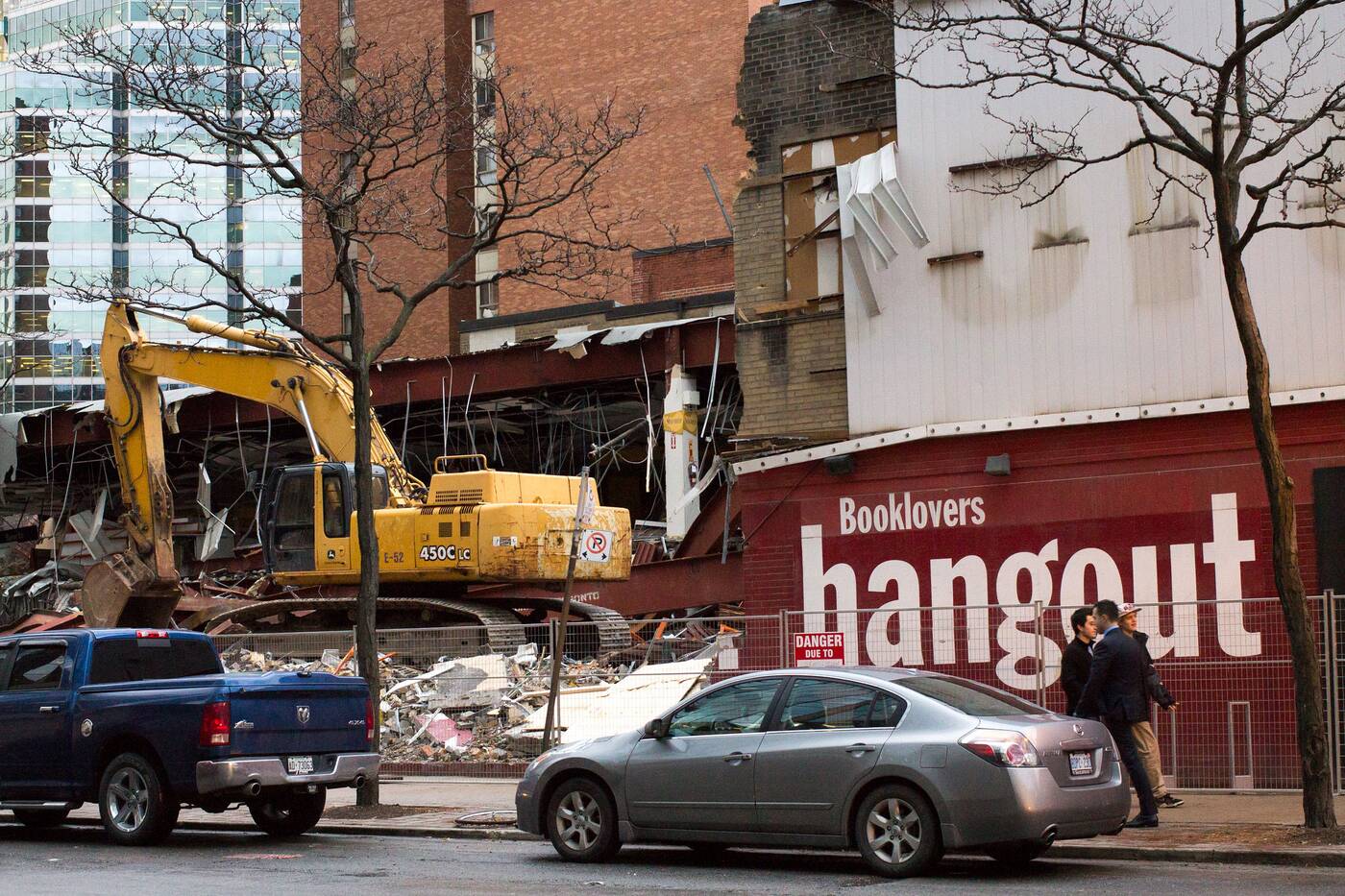 The World's Biggest Bookstore, after it was nearly demolished. Photo by Elle.

I now have a large selection on books on Toronto, many of which were bought in the store. However, after reading some of the comments posted online about the store, I realize that some people were pleased to see it close. Pity!

Doug Taylor was a teacher, historian, author and artist who wrote extensively about Toronto history on tayloronhistory.com. This article first appeared on his site on July 5, 2016 and has been republished here with the permission of his estate. The article has been modified slightly.