Growing up in Toronto, Mahyar Amiri wasn’t one of the kids studying art. He had no idea he would go on to become one of the top silkscreen artists in the province, own his own gallery and be selling original pieces to international buyers for over $10,000 at only 24 years old.

In elementary school, Amiri didn’t think of himself as an artist while drawing during classes to pass the time. It wasn’t until he was at Western University taking full-time classes to become a structural engineer that Amiri had an epiphany.

“I was looking at all these classes, and thinking to myself ‘is this the life I want?’ I felt like I was going to just be punching numbers into a calculator for the rest of my career. So I went into the dean’s office and told them I wanted to drop out,” Amiri said — something his parents were highly resistant to at first. 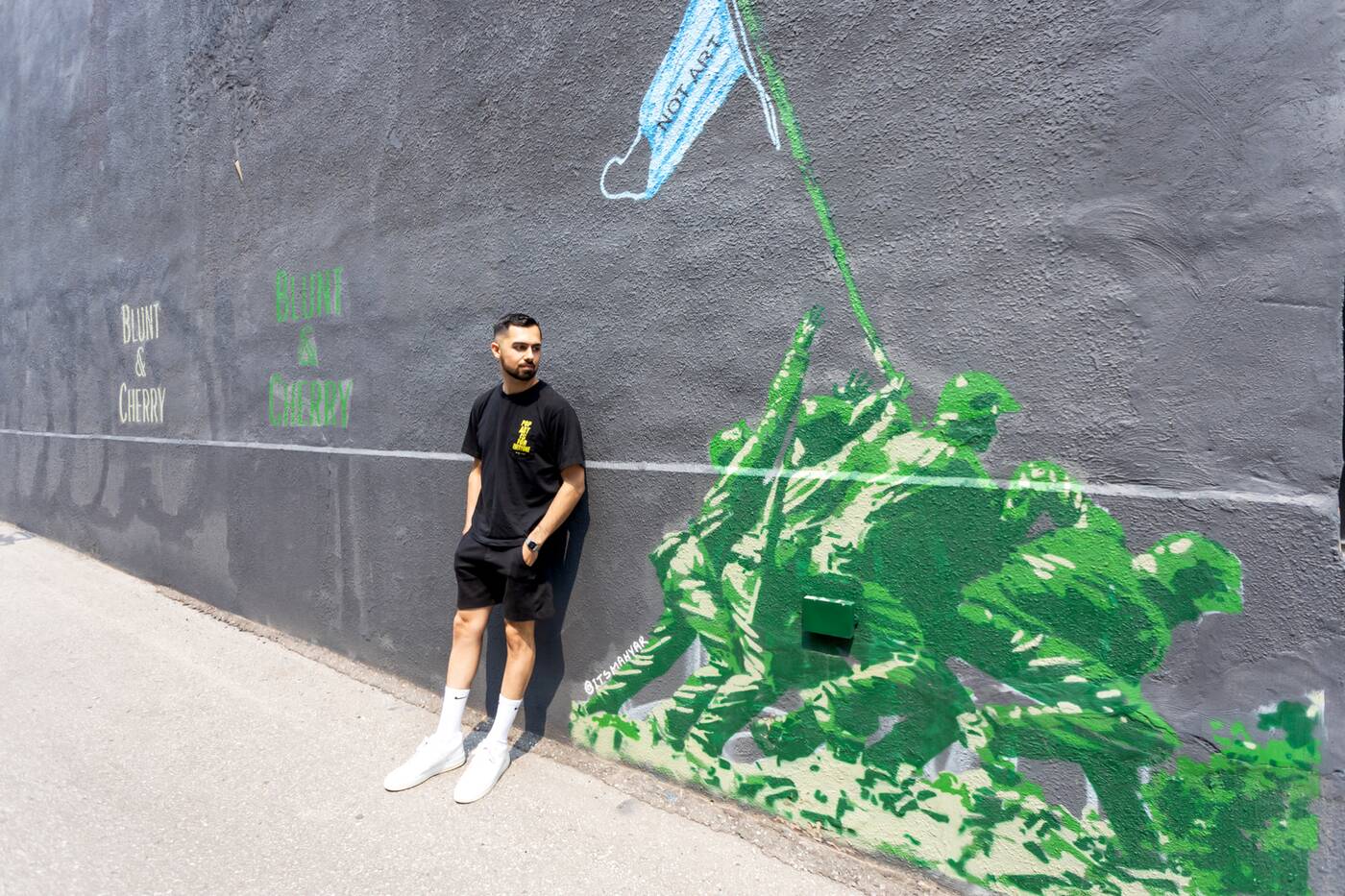 Amiri's WW3 mural, created for Blunt and Cherry, on King and Spadina represents the pandemic.

Amiri went on to get a business degree at York University, which he says is integral to his success as an artist — and he urges other artists to learn fundamentals of business if they want to be commercially successful.

About two years ago, Amiri started painting and sketching again, a hobby he put down and picked up throughout his life, and threw some of his hand-drawn art on canvas up on social media as a lark for friends and family. 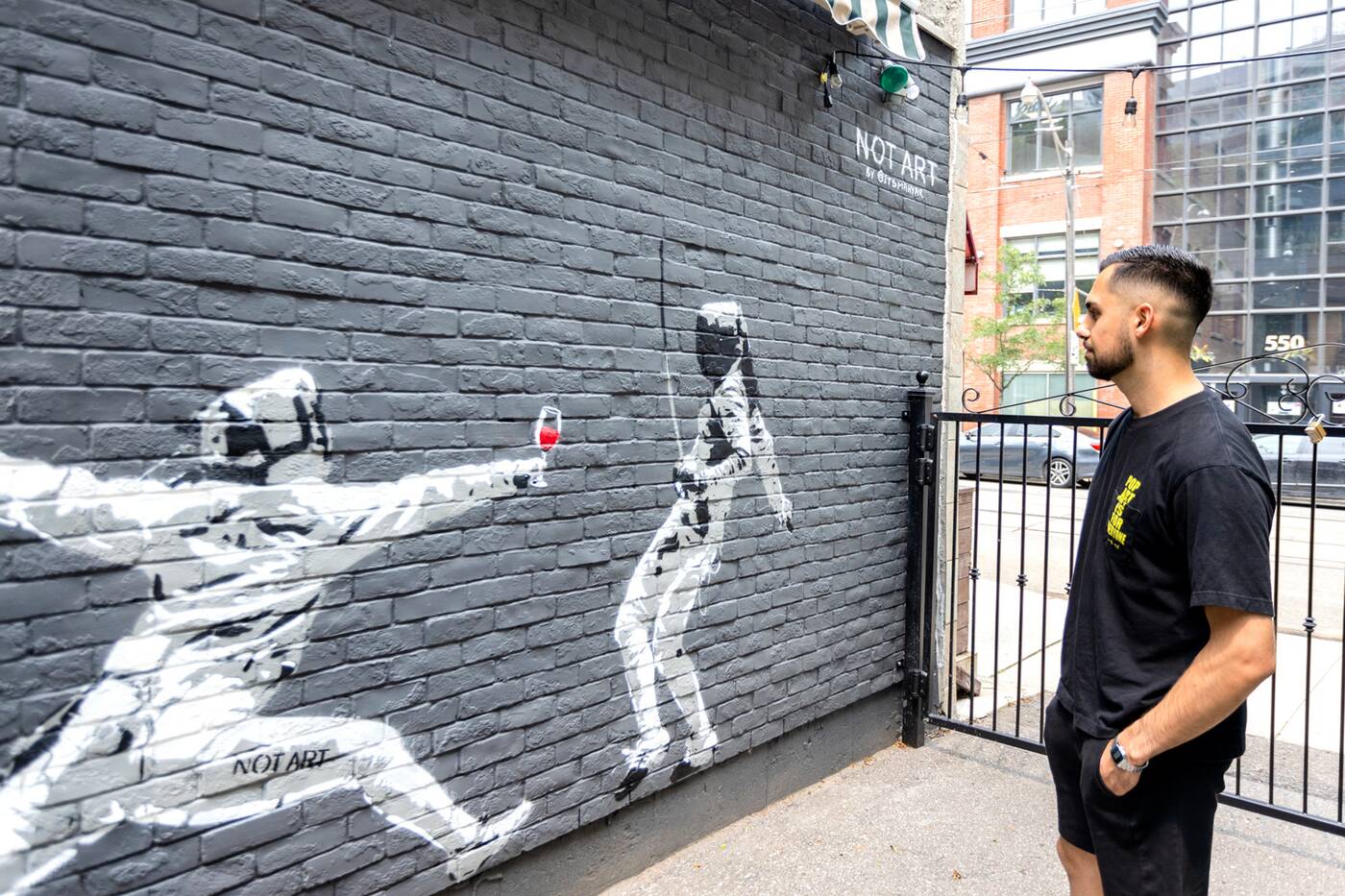 It quickly created a snowball effect, with galleries in downtown Toronto noticing his work and reaching out to represent him.

Then, not surprisingly, buyers from New York, L.A. and Miami started contacting Amiri directly on social media, but he never expected to make a living off his creations.

“I like what I do, and it's really nice to know that I started this, and I think I'm going to end this without doing it for the money, which will allow me to do this for the rest of my life, essentially, because I feel like I'll never be working,” Amiri said.

A huge help in getting him noticed, in the beginning, was his mural near King City Go Station titled Creation of Peace that he created as free public art to depict the pandemic and systemic racism happening in our world today. 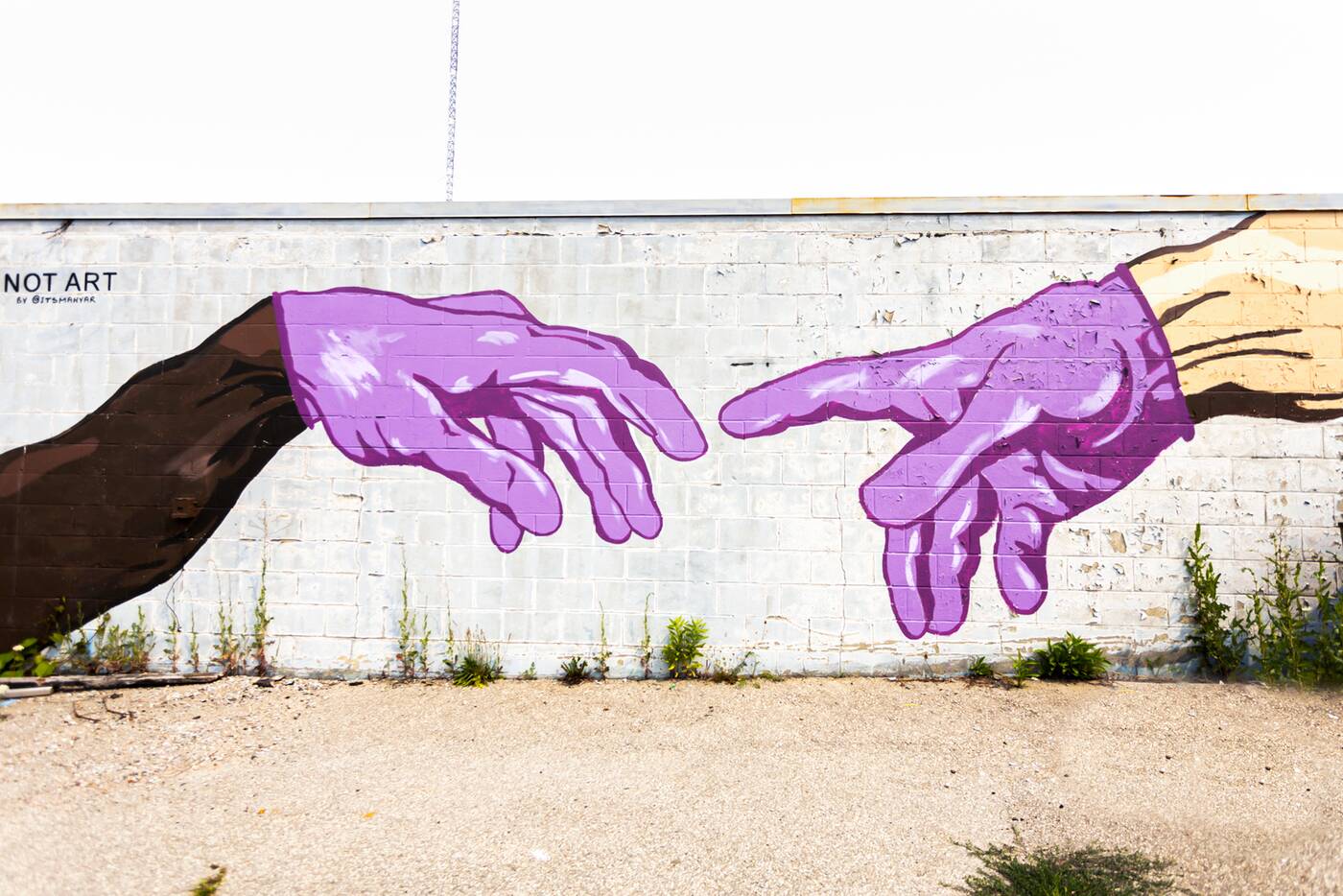 When Carval Homes building owner noticed Amiri at work on Creation of Peace, he was at first outraged, even though Amiri had permission from the tenant, then impressed by the work, and it led to the creation of a commissioned mural on the other side of the building.

The ghosts represent news outlets with polarizing views and another Mario is depicted smashing the words ‘racism, police brutality, I can’t breathe’ and ‘injustice’. 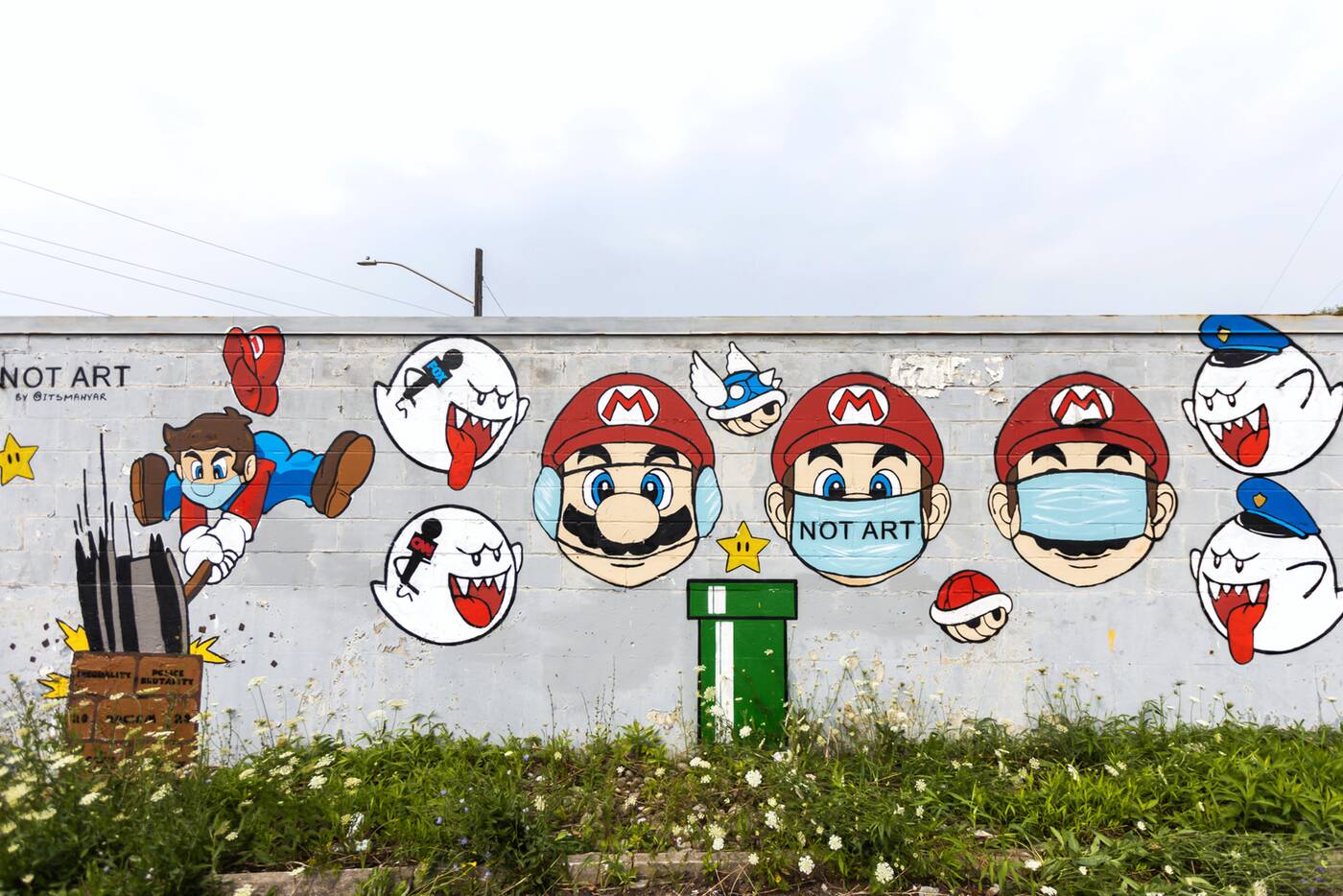 Amiri said many local residents stopped by when Amiri  was painting the murals, offering their support and encouragement.

One of Amiri's biggest inspirations is American pop artist, film director and producer Andy Warhol, whose silkscreen printing processes he meticulously researched in order to learn how to bring his own artistic vision to life.

Silkscreening is a very old hand-held process that started in the 15th century for printing images, but with the dawn of digital printing, it quickly became obsolete. 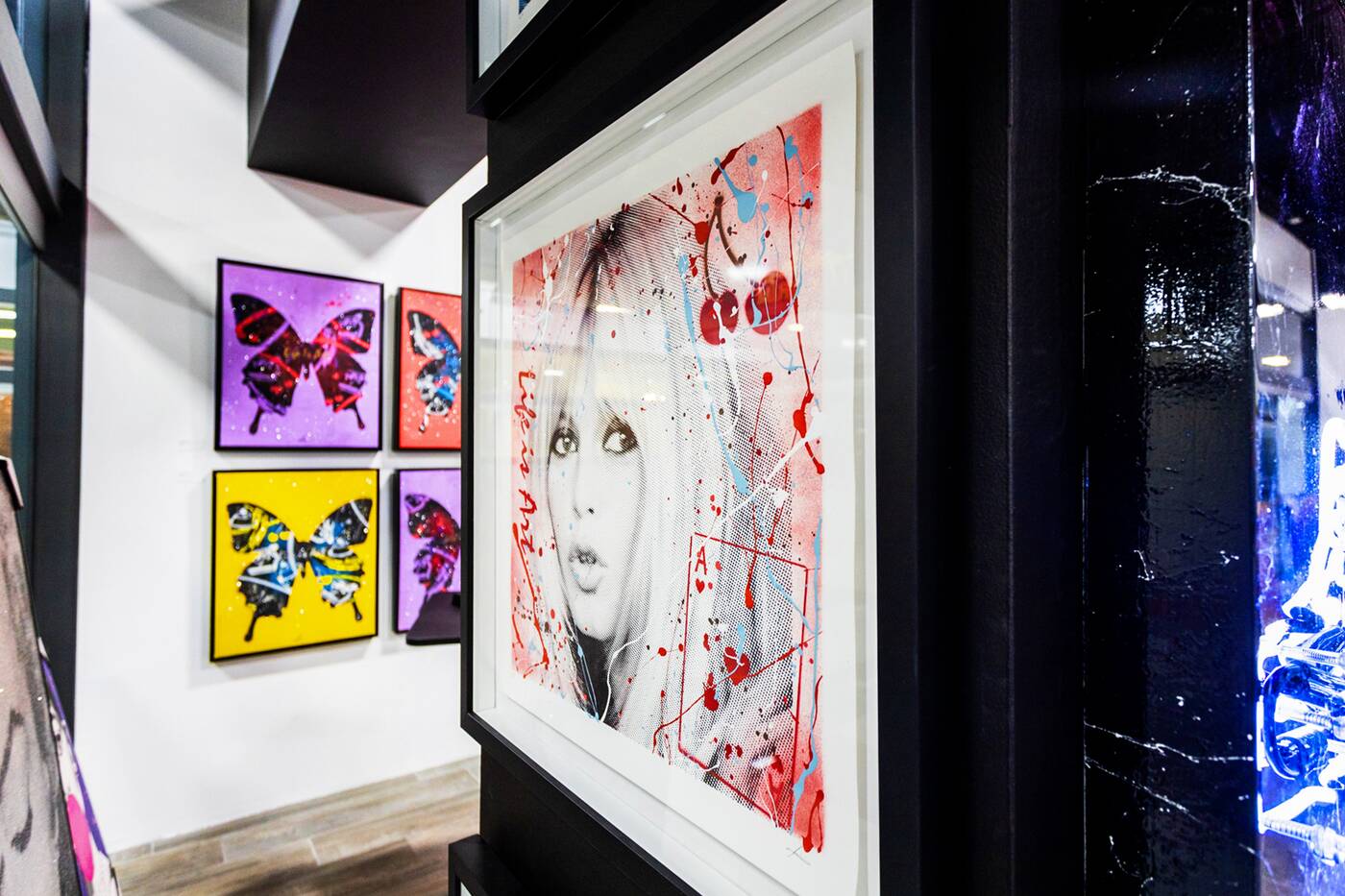 "The ink goes through the screen onto a material, and in my case, and Warhol's, it's caught on canvas. So a lot of my style is interrelated with Warhol, and silkscreening is something that no one really does anymore because it's very hard and there's a lot of mess to it," Amiri said.

What stands out to Amiri is Warhol's ability to do whatever he wanted with his art without reservation and to try things that no one else was doing. "If Warhol thought of doing something crazy, he would just go and do it. And I really like that about him," Amiri said.

One of the biggest technical difficulties with silkscreening is understanding the right viscosity of the paint, so it doesn’t get stuck in the screen, determining the correct speed and pressure to put on the squeegee because the paint dries quickly, and the immense physicality of the process.

These aspects are all reflected in the pricing for Amiri’s silkscreened pieces. 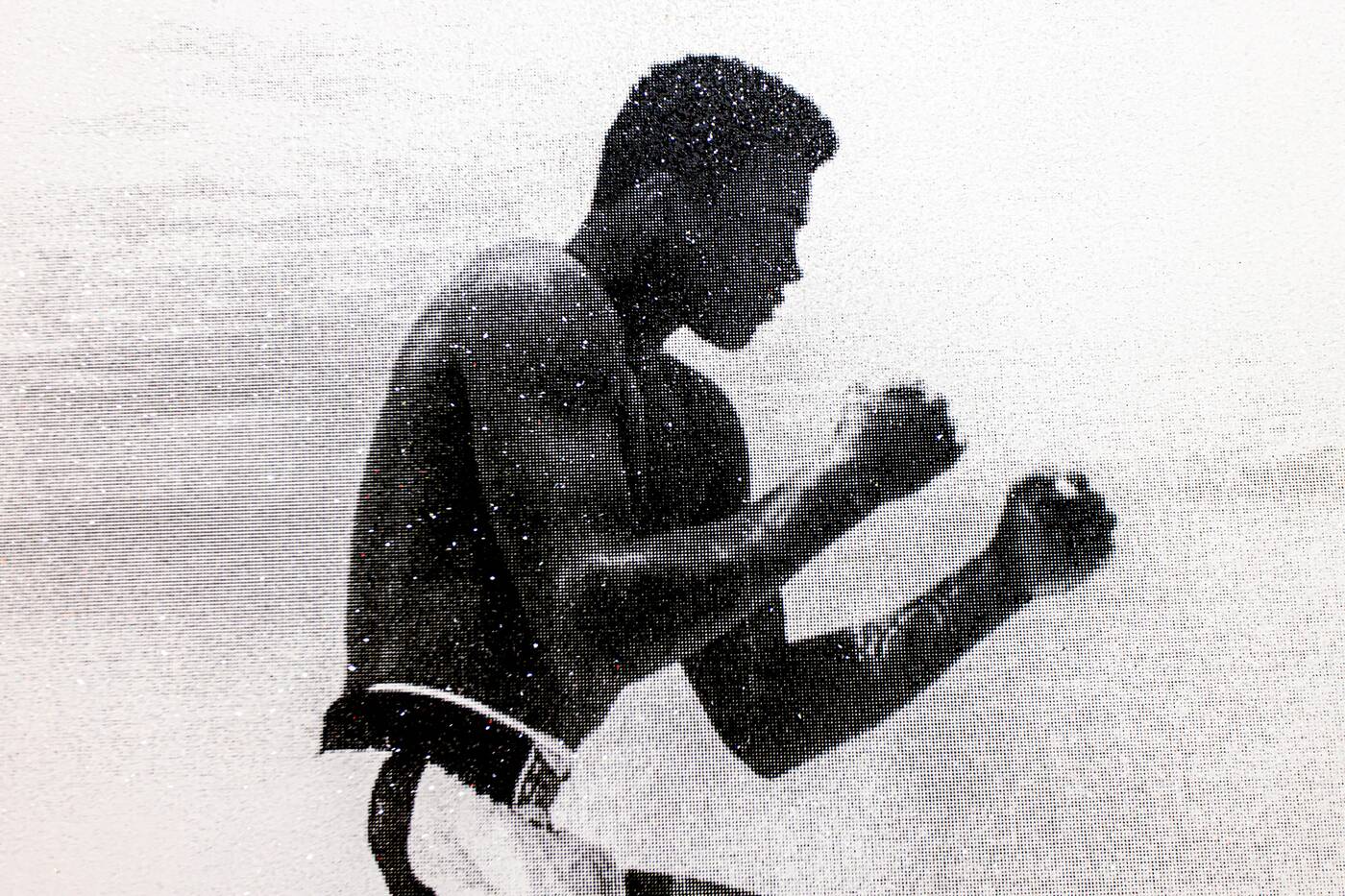 An up-close view of the silkscreen piece ALI.

When people are looking for a silkscreened piece in Toronto, they reach out to Amiri for custom work or they pick from my his own catalogue of finished pieces.

"It's something I enjoy doing because it's complicated — I don't enjoy doing easy things. The days I do get up that I have to do it, I feel like I'm going to war … but it's fun overall," Amiri said.

The originality of silkscreening really appealed to Amiri, as longevity is important to him as an artist and he didn’t want others to be able to easily replicate his work. So after watching old black and white videos of the process on YouTube, he purchased large pieces of canvas and other materials and started practicing.

"There are so many details that can go wrong, but when it’s done, a collector will pay a lot of money for something that's done right," Amiri said. 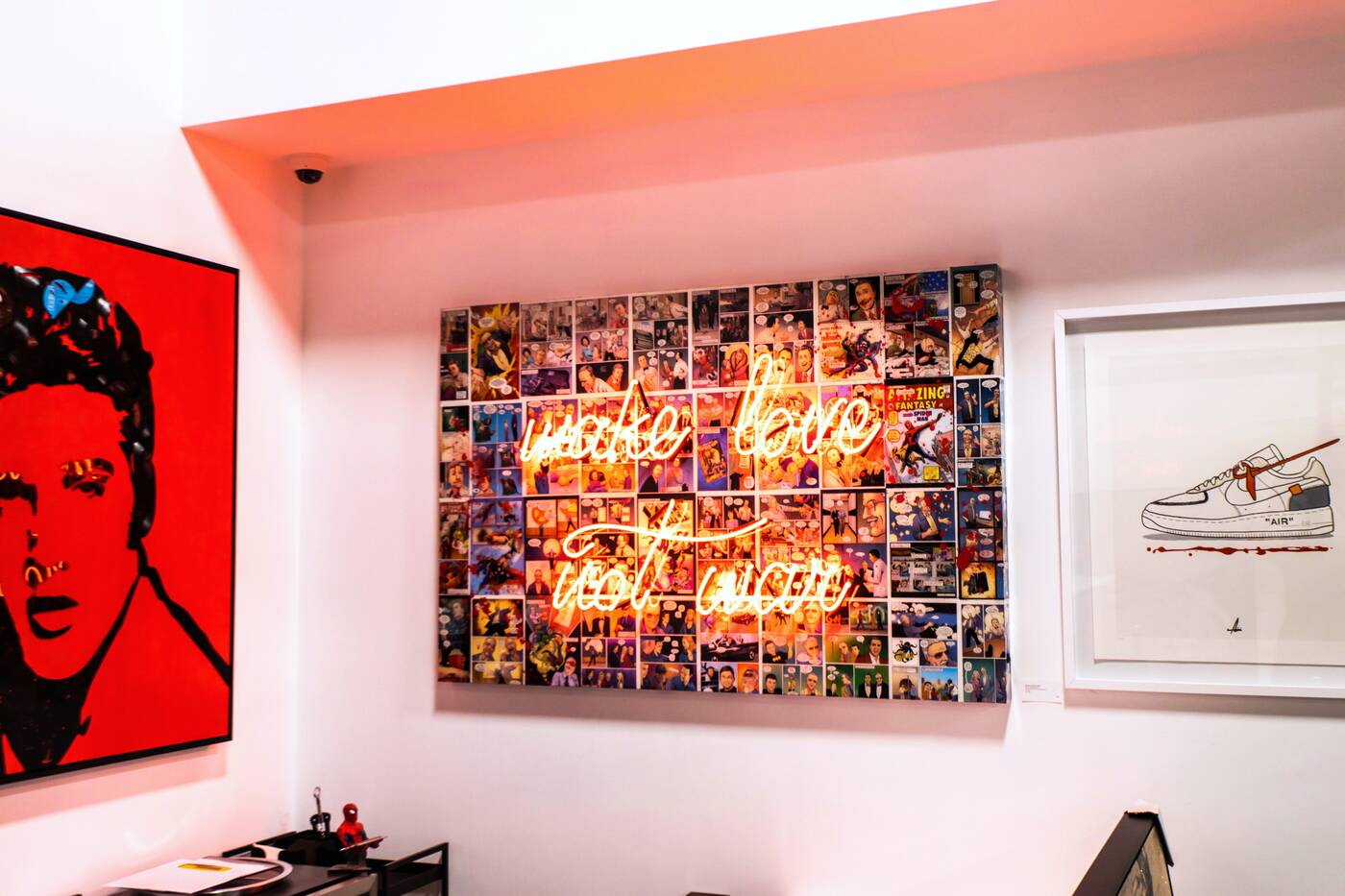 Along with silkscreening, Amiri has been trying his hand at various other mediums — neon glass lights mounted on resin collages of comics pulled from vintage Marvel books , Banksy-esque hand-painted murals found scattered around the GTA, warped records painted with acrylic iconic images of Elton John and The Beatles, and even an art car with his signature Mona Lisa eyes.

If you look closely, you'll find the eyes staring at you somewhere close to most of his public art around Toronto. 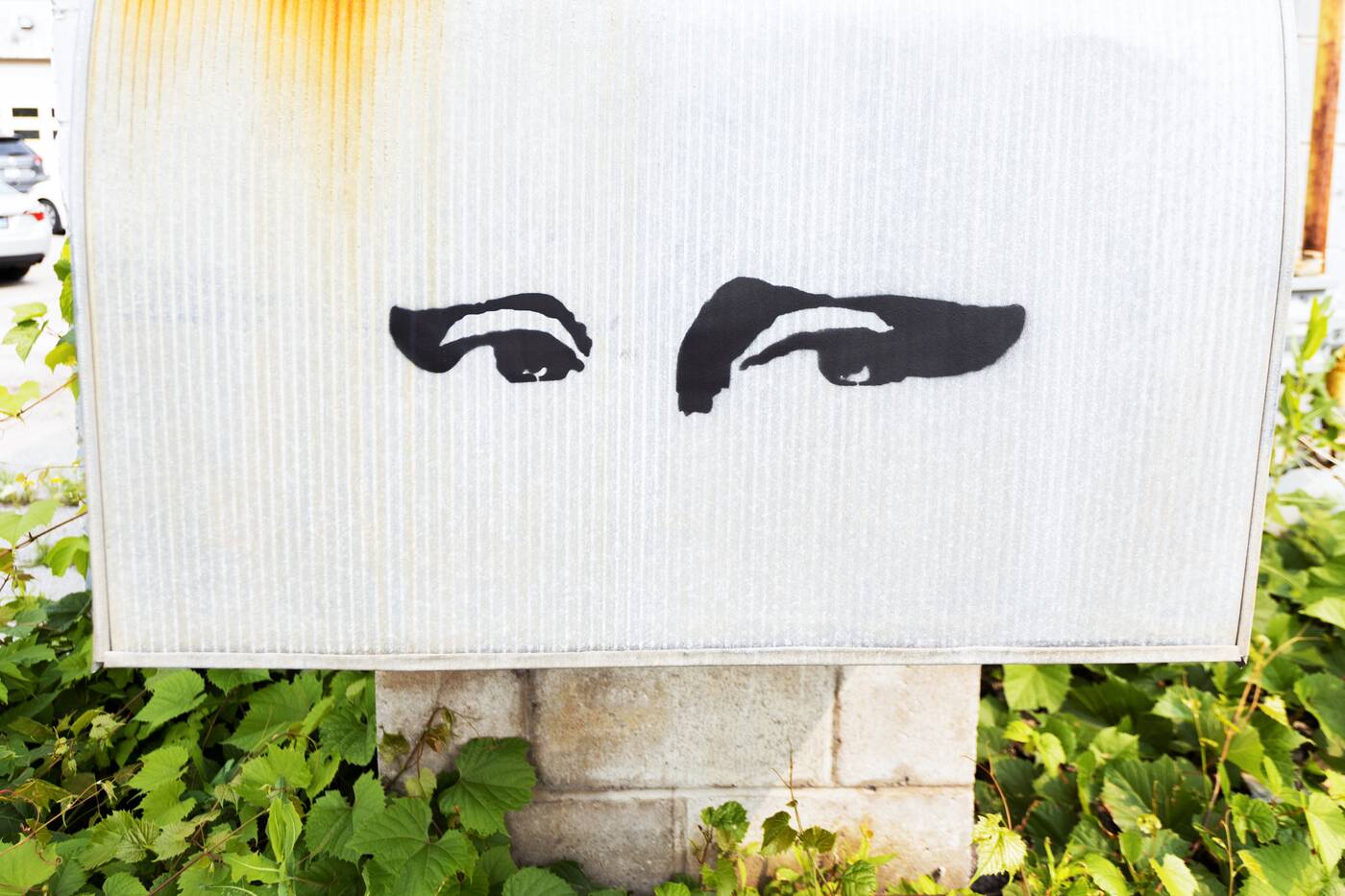 "Artists are typically supposed to stick with one style. I don't know how other people do it, but props to them because I'm one of those oddballs that can't stick to one thing. Maybe I haven't found that one thing yet, so I'm trying all these different things first," Amiri said.

His largest and hardest piece to create to date was ALI, which is a mirror image of the American boxer Muhammad Ali fighting himself — a concept based on Amiri’s belief that "Our only competition should be ourselves, and that we should never compare our success to others in order to grow as individuals."

The eight by 17-foot silkscreen print, about the size of two large garage doors, sold for $12,000. 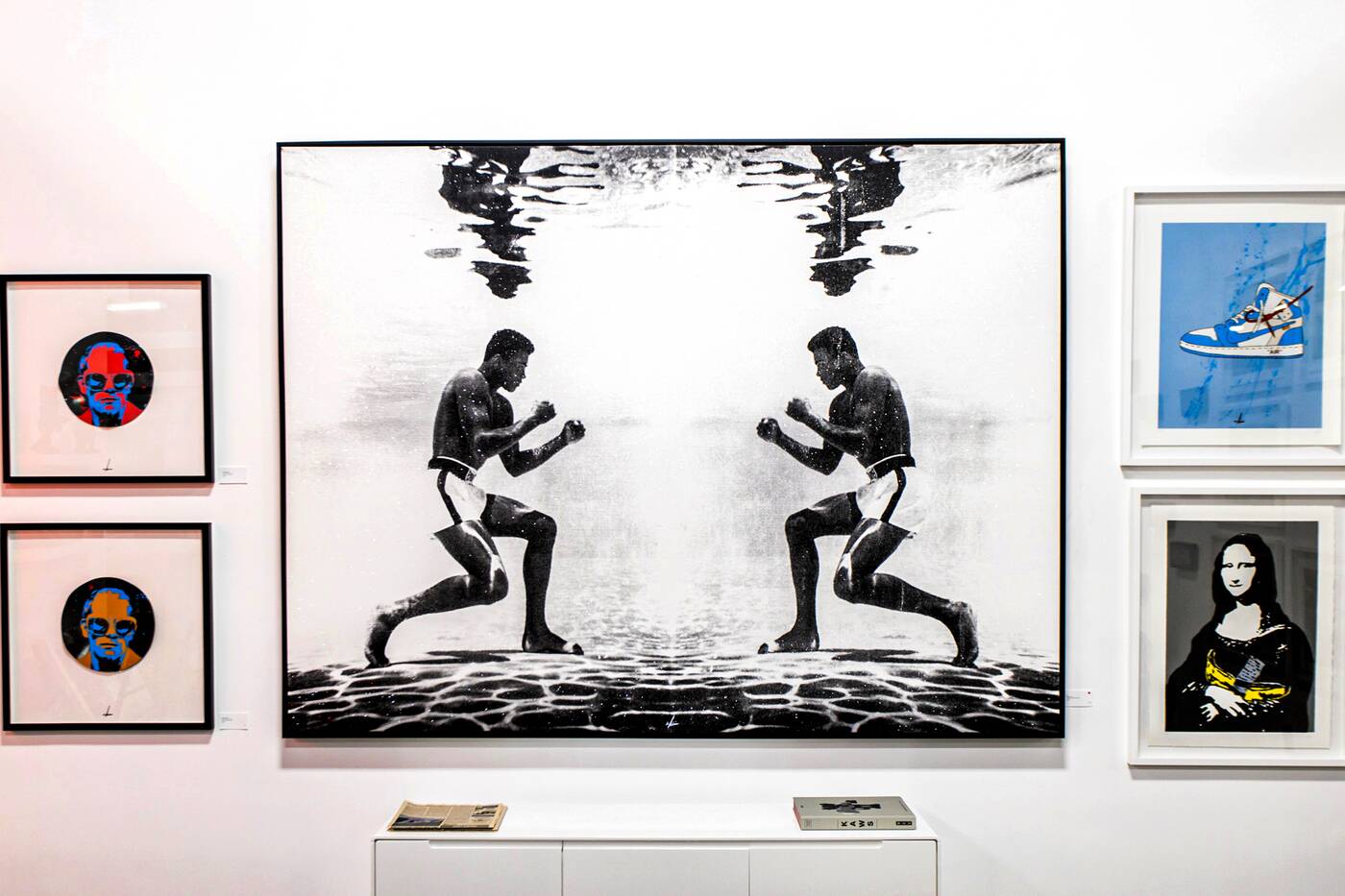 "I can go to sleep happy knowing that I did something really crazy. To get into silkscreening and understand all the mistakes that could happen and the fundamentals of how it's supposed to come out the way it should — It takes the right somebody with a lot of love," Amiri said.

In January of last year, Amiri opened his own gallery called NOT ART with no idea the pandemic would hit right after the launch. Despite the lockdowns, Amiri has been endlessly busy with requests from restaurants looking for him to paint murals on their walls and private clients with interesting projects. 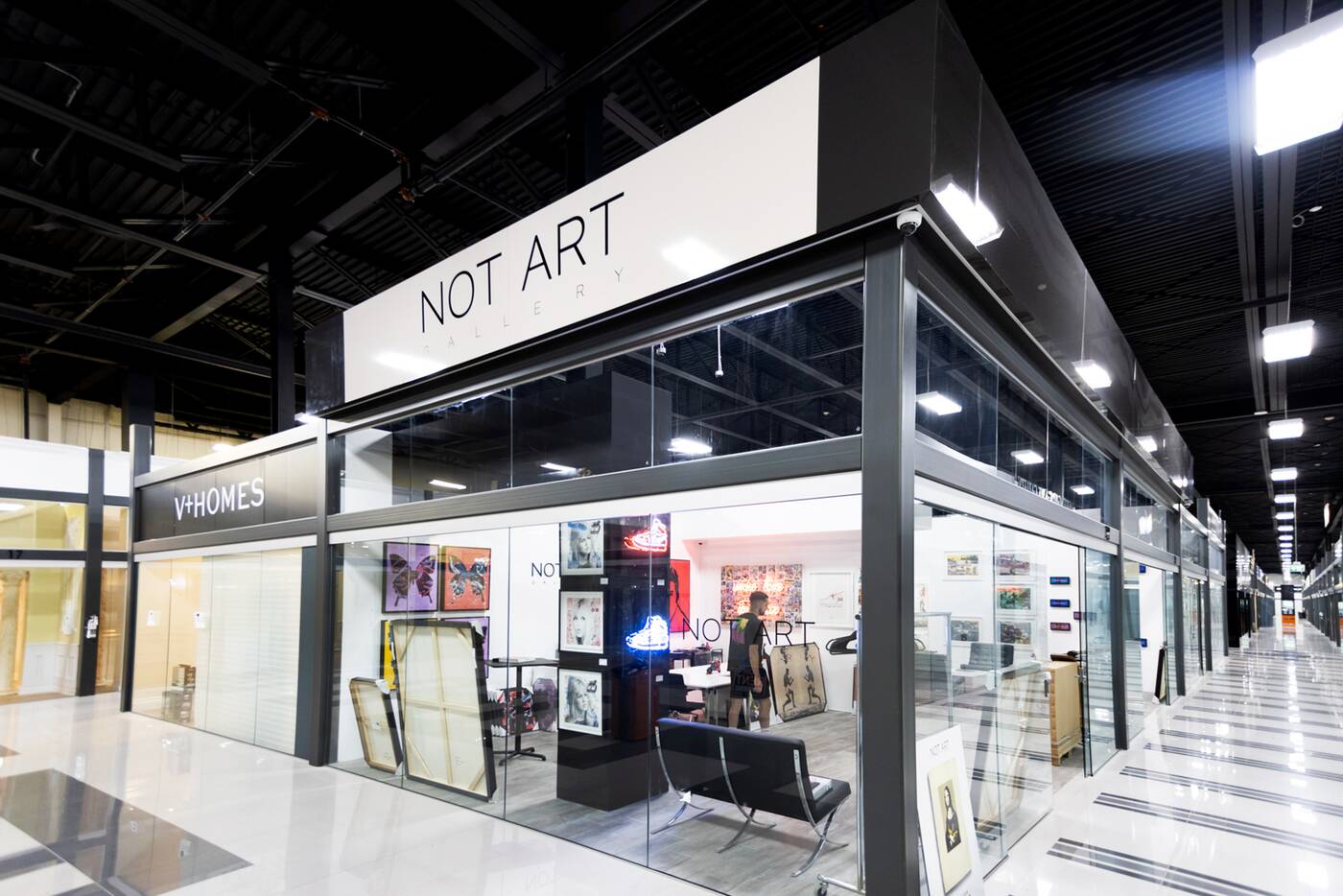 One client even commissioned multiple works of his glass neon resin collages with famous lines from movies, for an at-home cinema, and a Mario inspired old-school Nintendo arcade in a private residence — for a total of around $100,000 worth of work.

"He was a really cool guy. We're friends and we still talk every day. I actually just quoted him for a sculpture yesterday. I'm not even joking," which is a new medium that Amiri is eager to take on as a challenge.

Two years ago when Amiri was first starting out as an artist, galleries reached out to have his works hung in downtown Toronto, but part of him didn't like the feeling of his art being in someone else's hands. He also wanted to retain 100 per cent of the sale, instead of losing the typical 40 to 60 per cent to the gallery. 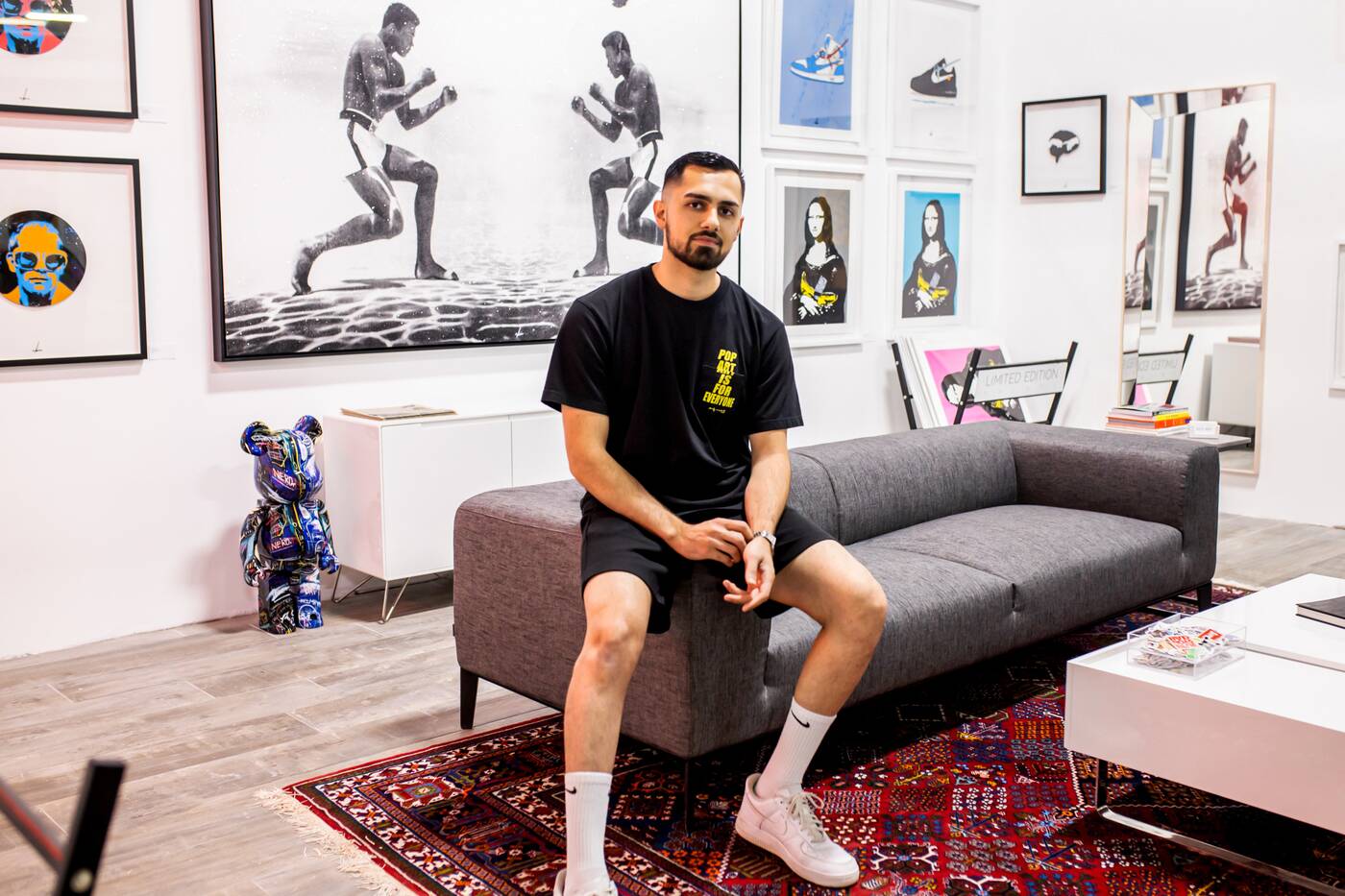 Having his own space was integral for creating complete artistic independence and to be able to showcase the variety in his work, according to Amiri.

His end goal is to create a platform and foundation for other Toronto artists, photographers and creatives to be represented through NOT ART Gallery. 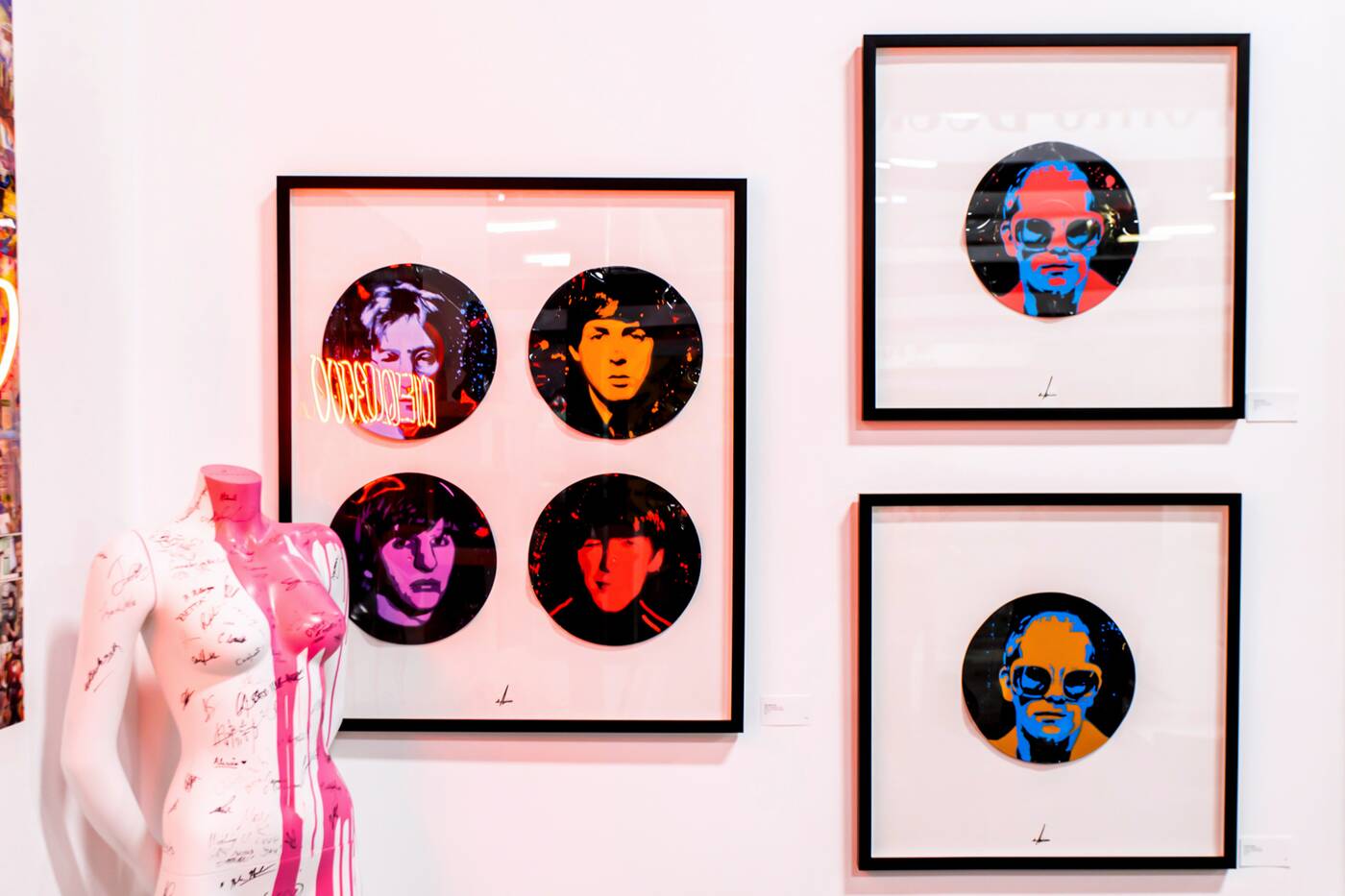 "I had an experience of being rejected at some galleries, and something inside of me didn't want other artists in Toronto to feel that. I want to represent other local artists and have anybody welcome — people who are passionate, anybody local who has a spark in their eyes," Amiri said.

In early July Amiri released his CASH ONLY series of 100 silkscreen canvases of 100 dollar bills. Each one is signed and numbered out of 100, and around half of them sold within the first 48 hours after posting them on social media. 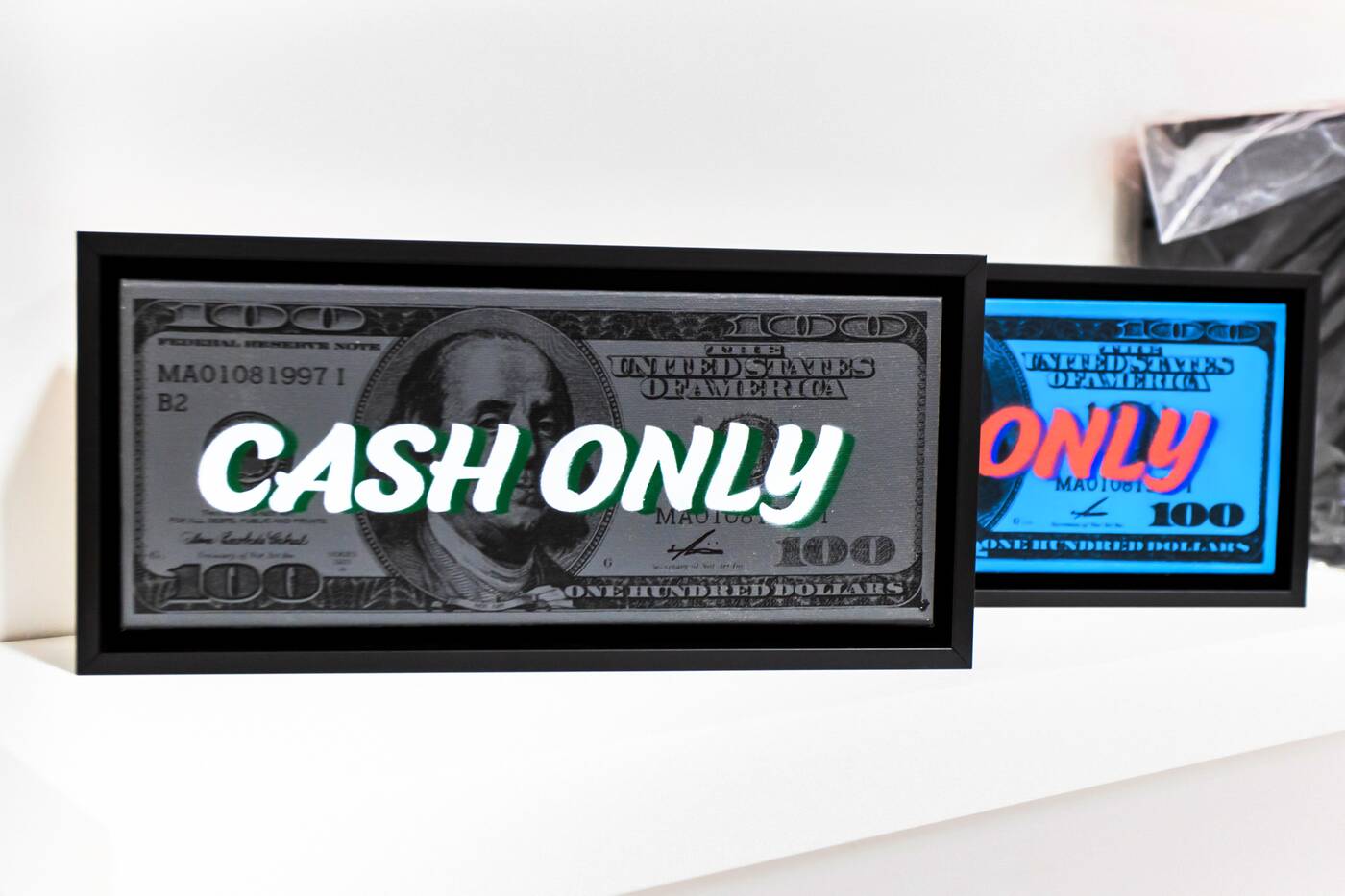 Amiri's plan is to take six CASH ONLY pieces and hide them around downtown Toronto for a scavenger hunt in the next couple of weeks, with clues. The lucky people who can find them will keep them for free.

"This has been my largest edition yet, and my most affordable original, listed at $100. Who knows maybe one day they will be worth more than that," Amiri said.