My earliest memories of the Royal Ontario Museum date from the 1940s, when my father took my brother and me downtown to view a parade on University Avenue.

When it started to rain, he decided that we should go into the museum. I was a young boy at the time, and the dinosaurs, the Egyptian mummy, and the mounted animals in the natural history section fascinated me. 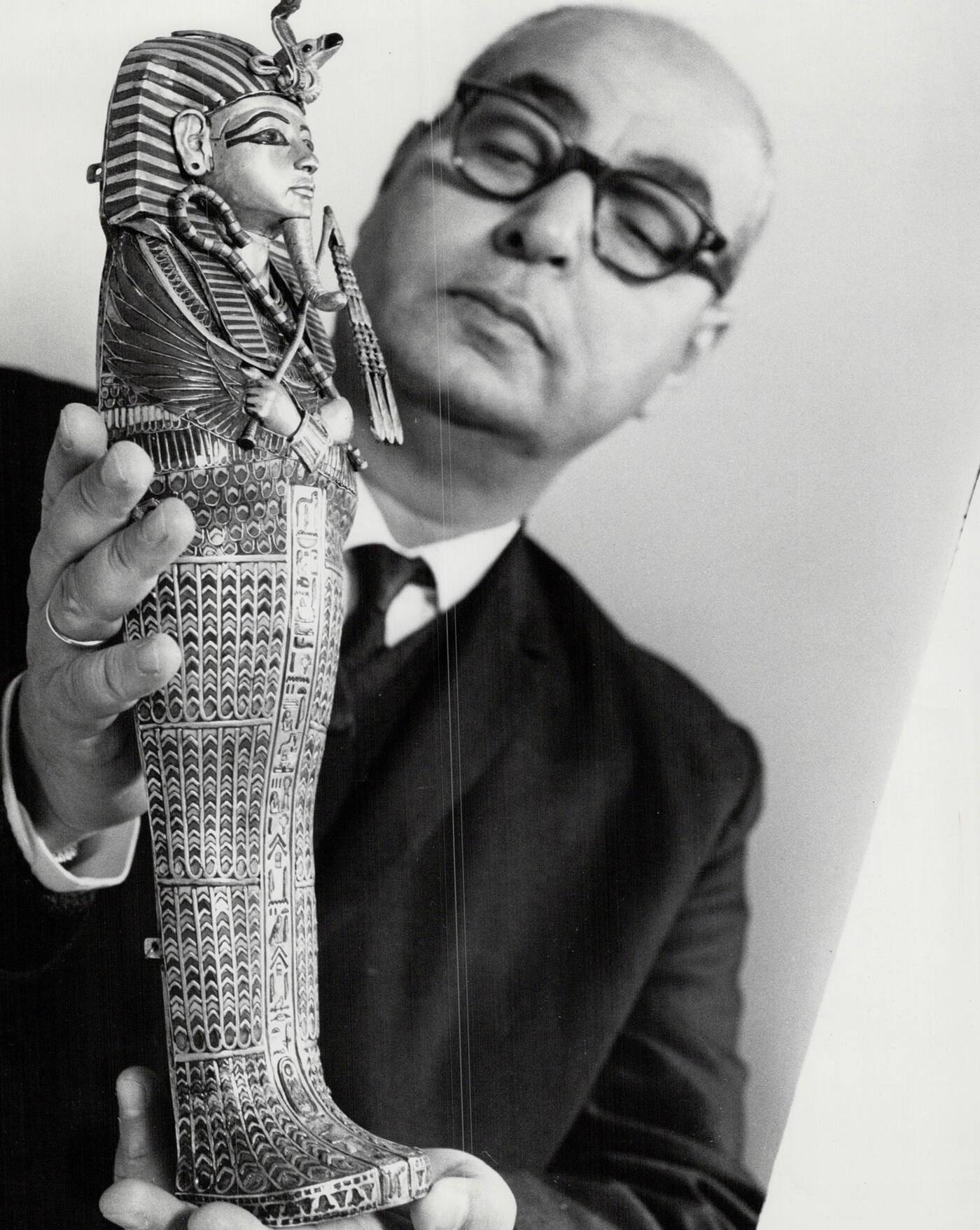 An Egyptian relic on display from an exhibiton at the ROM in 1966. Photo by Dick Darrell via the Toronto Library Archives.

The other item that I vividly remember from this visit is the tall totem pole in one of the stairwells. Today, these same exhibits thrill children and adults alike.

The Royal Ontario Museum has a history that spans over a century. It began in the early 20th century, at a time when Toronto was growing rapidly and the need for a world-class museum was clearly evident. 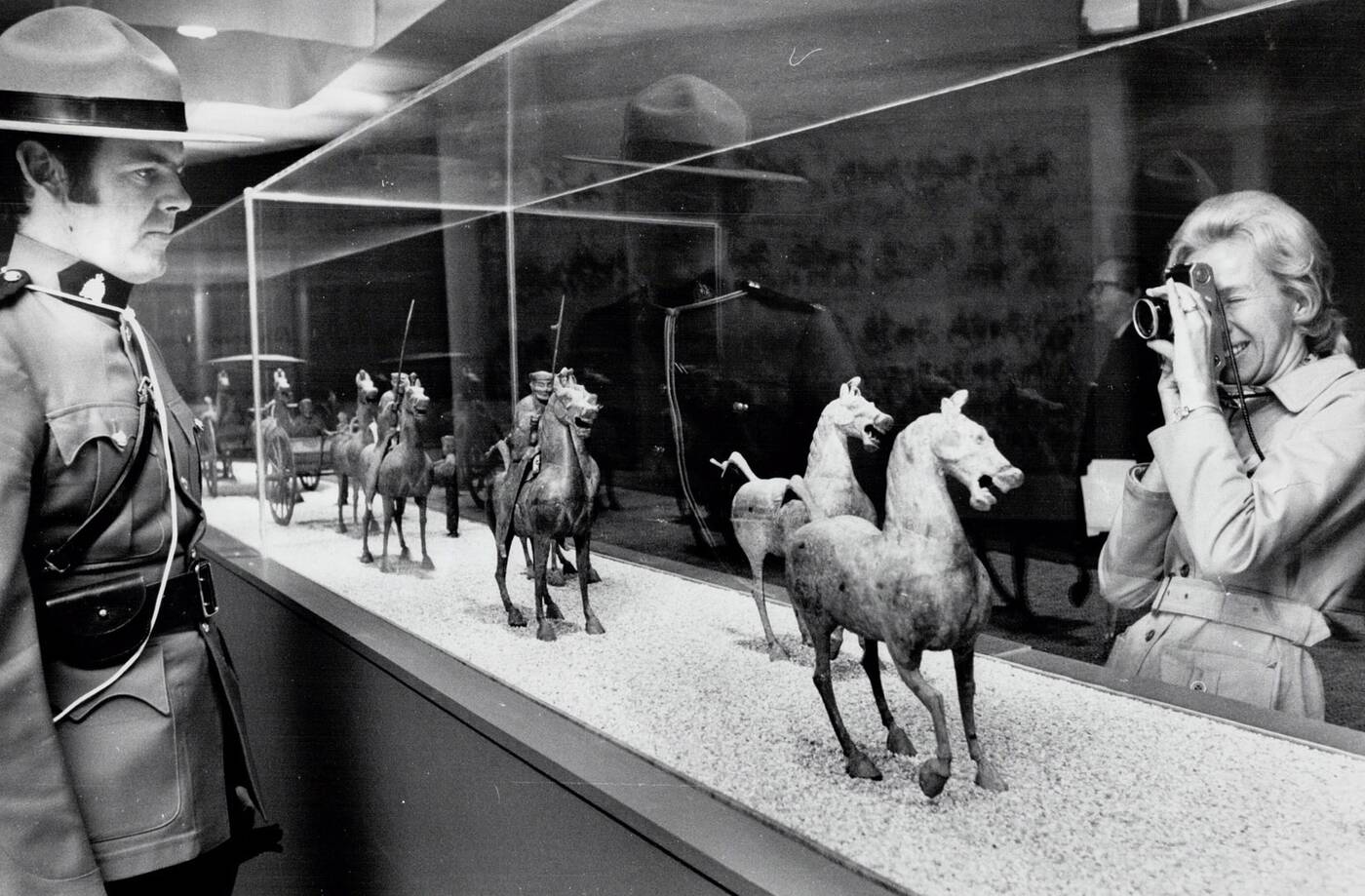 A Chinese Art Exhibition at the Royal Ontario Museum in 1974. Photo by Toronto Public Library.

A small group of influential people sought funding from the Ontario Government and the University of Toronto. As a result of their efforts, the Ontario Legislature passed The ROM Act on April 16, 1912, and the long history of this venerable institution commenced.

The facade of the new museum was to face Philosophers' Walk, near the intersection of Bloor and Queen's Park Avenue. 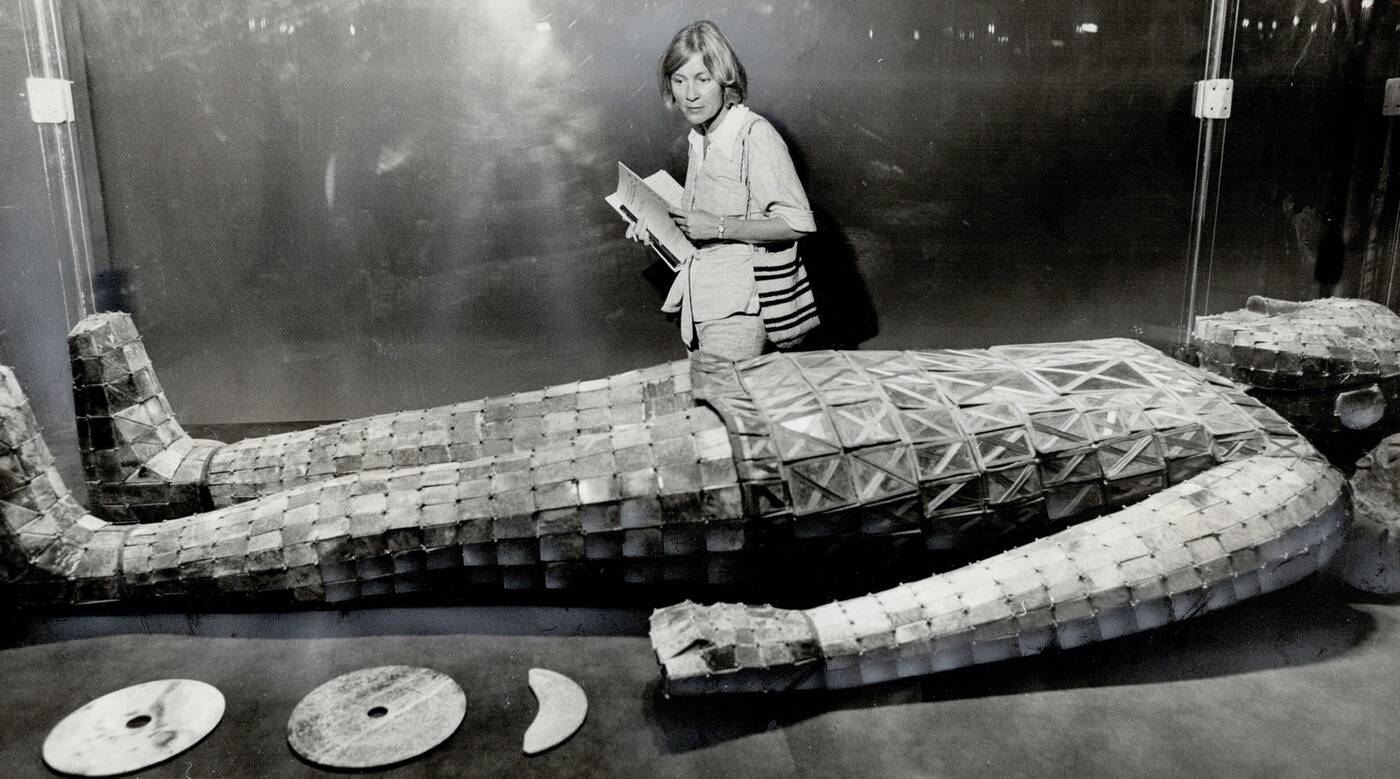 One of the most staggering exhibits of the Chinese archeological collection at the Royal Ontario Museum in 1974 was this burial suit made from 2,160 tablets of jade stitched with gold wire. It was supposed to prevent the decay of the corpse of prince Liu Sheng's wife. When opened; however; there was nothing but dust inside. Photo by Graham Bezant via the Toronto Library Archives.

The architects for the building were Darling and Pearson. The walls of the structure were covered with pale chalk-coloured bricks and terracotta, and the entrance was on the north side, facing Bloor Street.

It was officially opened on March 19, 1914, by the Duke of Connaught, Canada's former governor general. 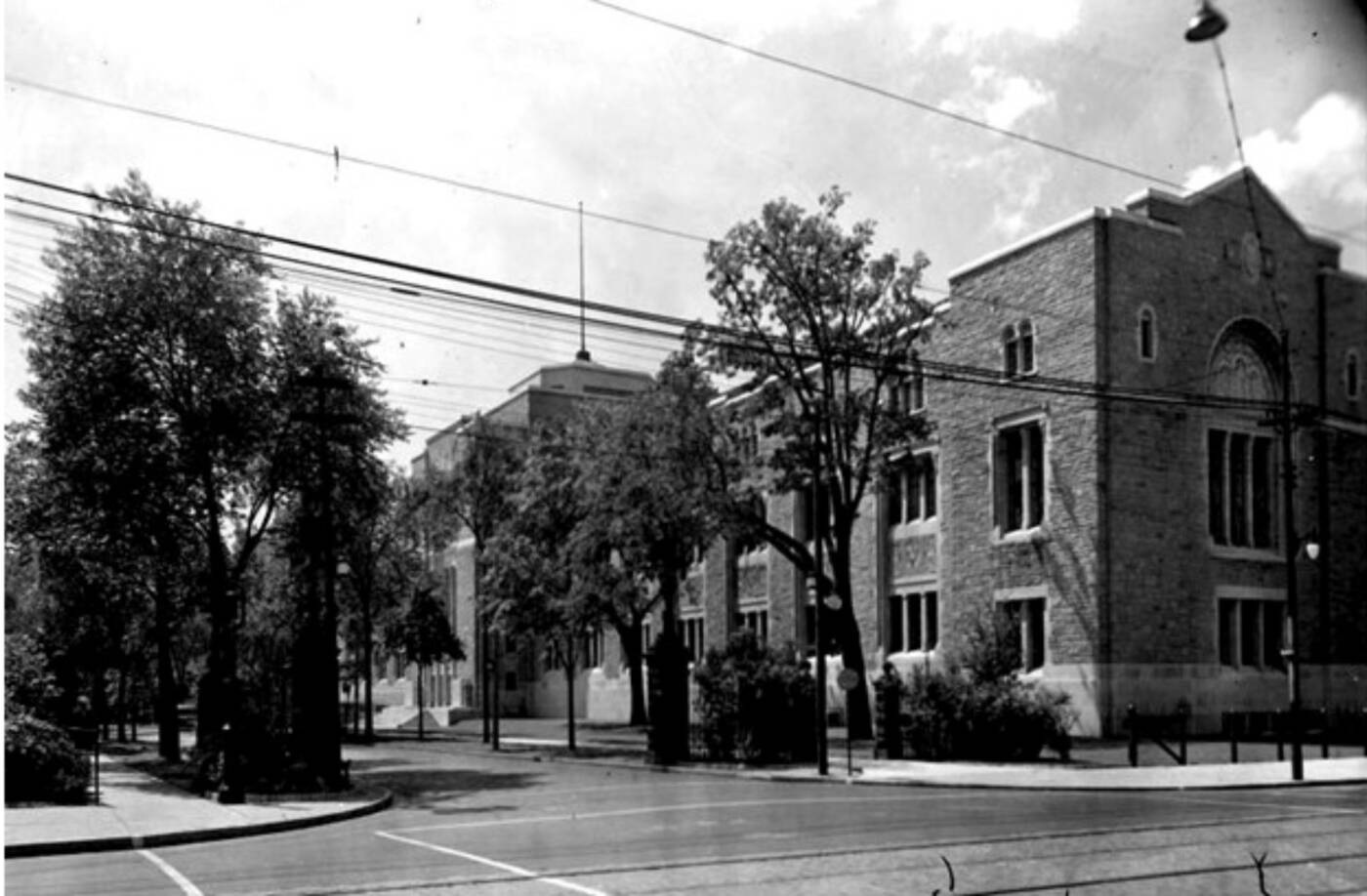 The 1933 addition to the ROM, facing Queen's Park Crescent, photo taken the year it opened. Photo by Toronto Archives.

An addition was added to the museum 19 years later, opening on October 12, 1933. The original section of the museum became the west wing, and faced Queen's Park Crescent. Its walls were faced with pale-yellow bricks and Ontario limestone.

The architects were Chapman and Oxley, who chose the Beau-Arts style, with richly detailed classical symbols. The main entrance was on Queen's Park Crescent, the combined structures creating a U-shaped building. 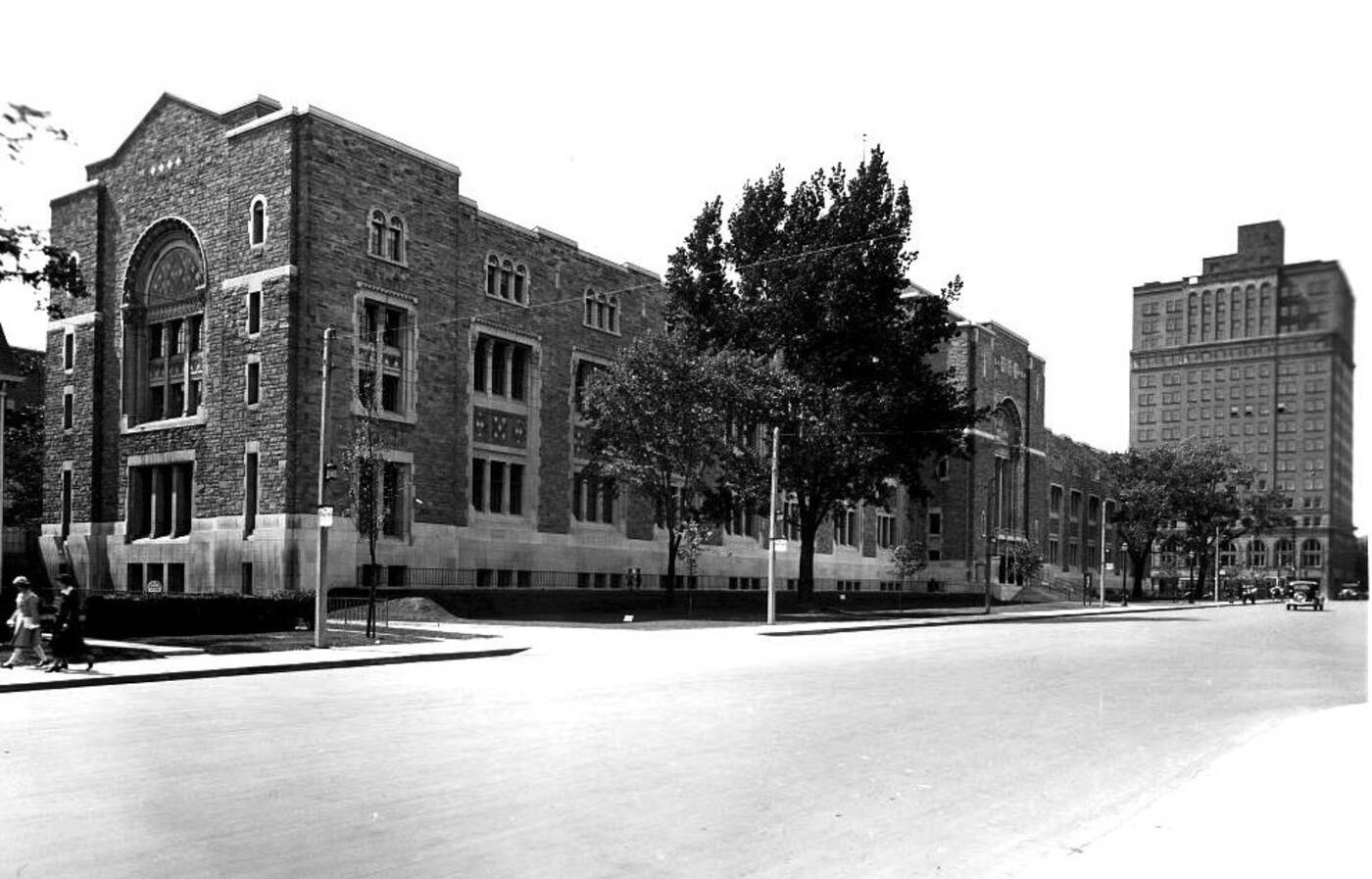 North of Queen's Park Crescent in 1930. Photo by Toronto Archives.

In 1967, the museum severed its connection with the University of Toronto and became a separate entity. The ROM, as most people refer to it today, was renovated in 1984, at a cost of $55 million. It was officially reopened by Queen Elizabeth II. 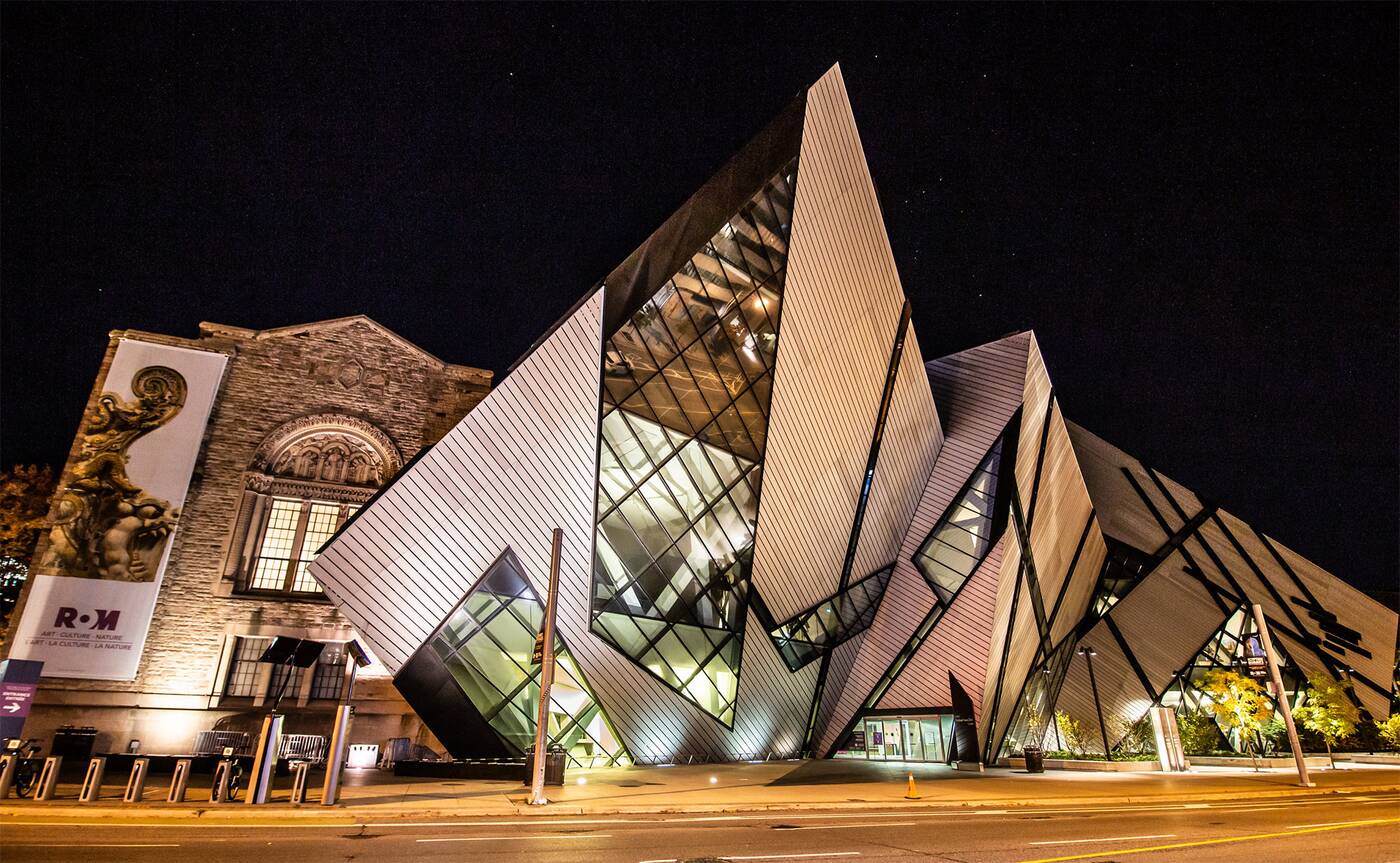 The next major change to the museum occurred in 2007, when another wing was added, named the Michael Lee-Chin Crystal, at a cost of $320 million.

Its architect was Daniel Libeskind, who relocated the main entrance to Bloor Street.

The museum has in its possession 6 million artifacts and attracts visitors from all over the world, as well as those living in Toronto and the surrounding area.

Doug Taylor was a teacher, historian, author and artist who wrote extensively about Toronto history on tayloronhistory.com. This article first appeared on his site on May 13, 2015 and has been republished here with the permission of his estate. The article has been modified slightly.