If you're not aware already, a neighbourhood in Toronto got its very own getaway during the pandemic called Bloordale Beach, a sandy lot that you could say is by the water, if you count puddles. People have often taken to the spot to express their creativity in the quirkiest of ways. 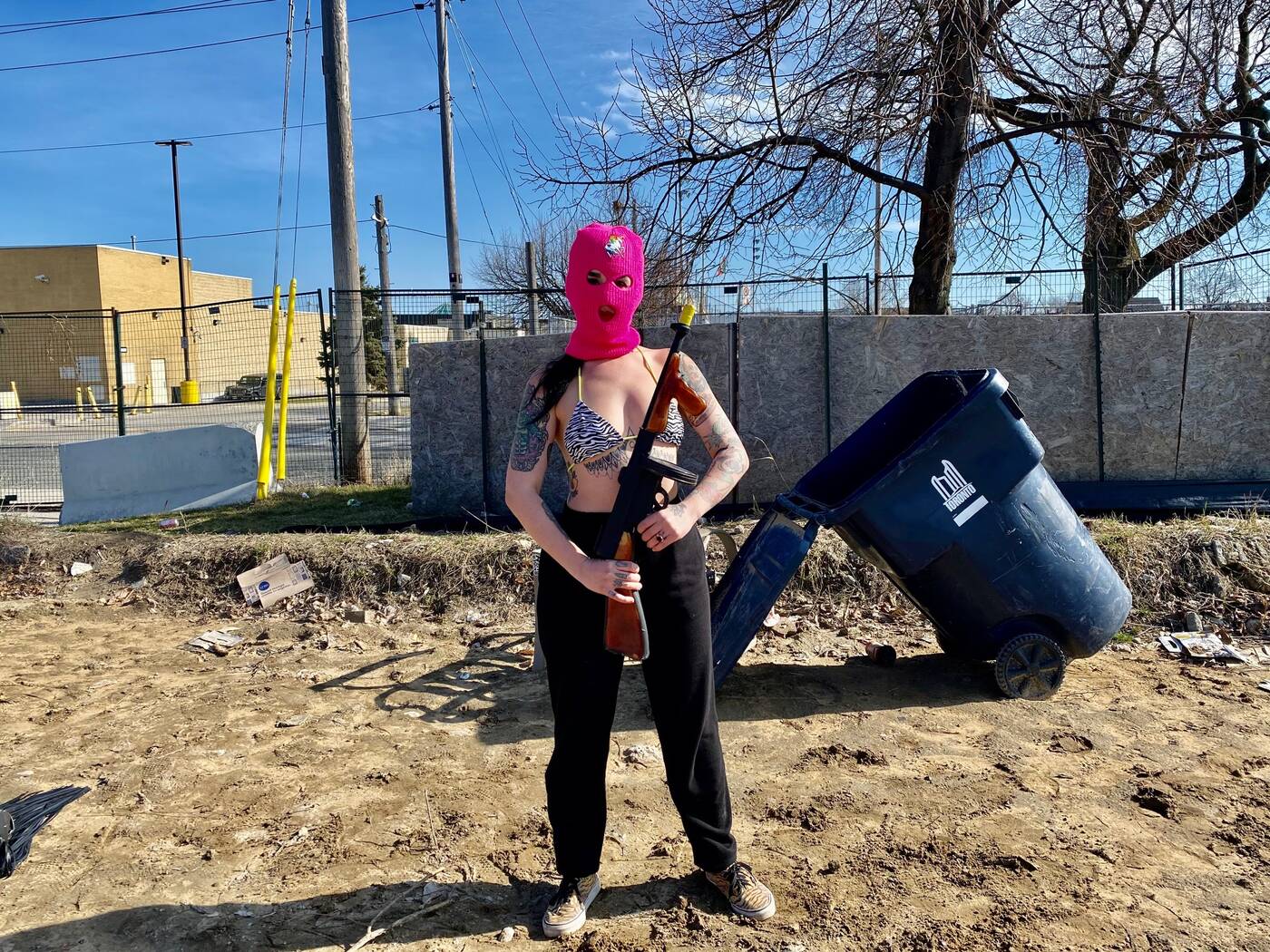 The hot pink balaclavas are a tribute to the movie Spring Breakers as well as feminist performance artists Pussy Riot, and they're part of the way the burlesque show Pussy Whipped Wednesdays has adapted to performing during the pandemic.

They've been putting on their inclusive burlesque experience for seven years at Bovine Sex Club, but had to move their show online during lockdown.

They took to Bloordale Beach in their balaclavas to film #freebritney, their third online show. 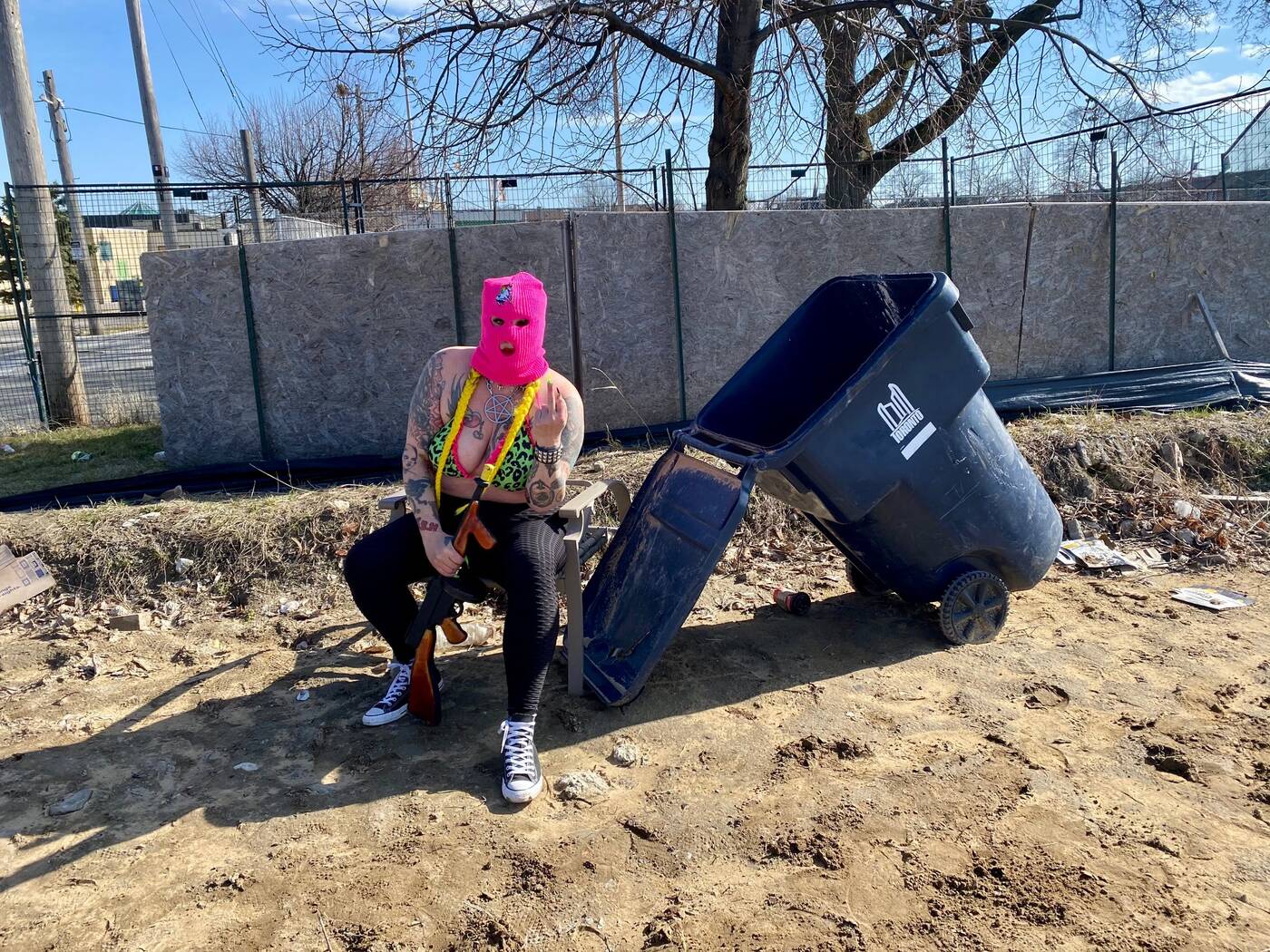 The pink balaclavas are a reference to Spring Breakers and Pussy Riot. Photo by Tanya Cheex.

"Even though the cast is hard rock 'n' roll at heart we realized what big Britney fans we are at heart," Tanya Cheex of Pussy Whipped Wednesdays tells blogTO.

"Watching Britney Spears dancing in her living room on social media trapped in her conservatorship kinda reflected in a small way how we all felt in pandemic lockdown, the loneliness and sometimes despair of self-isolation."

A documentary about Britney Spears and the conservatorship she's been trapped in took off recently, and although the pop star's battle to regain control of her life (something the legal restrictions of conservatorship have taken away from her) has been going on for some time, the doc brought the issue to light for a wider audience.

So what's the connection to Toronto's burlesque scene? 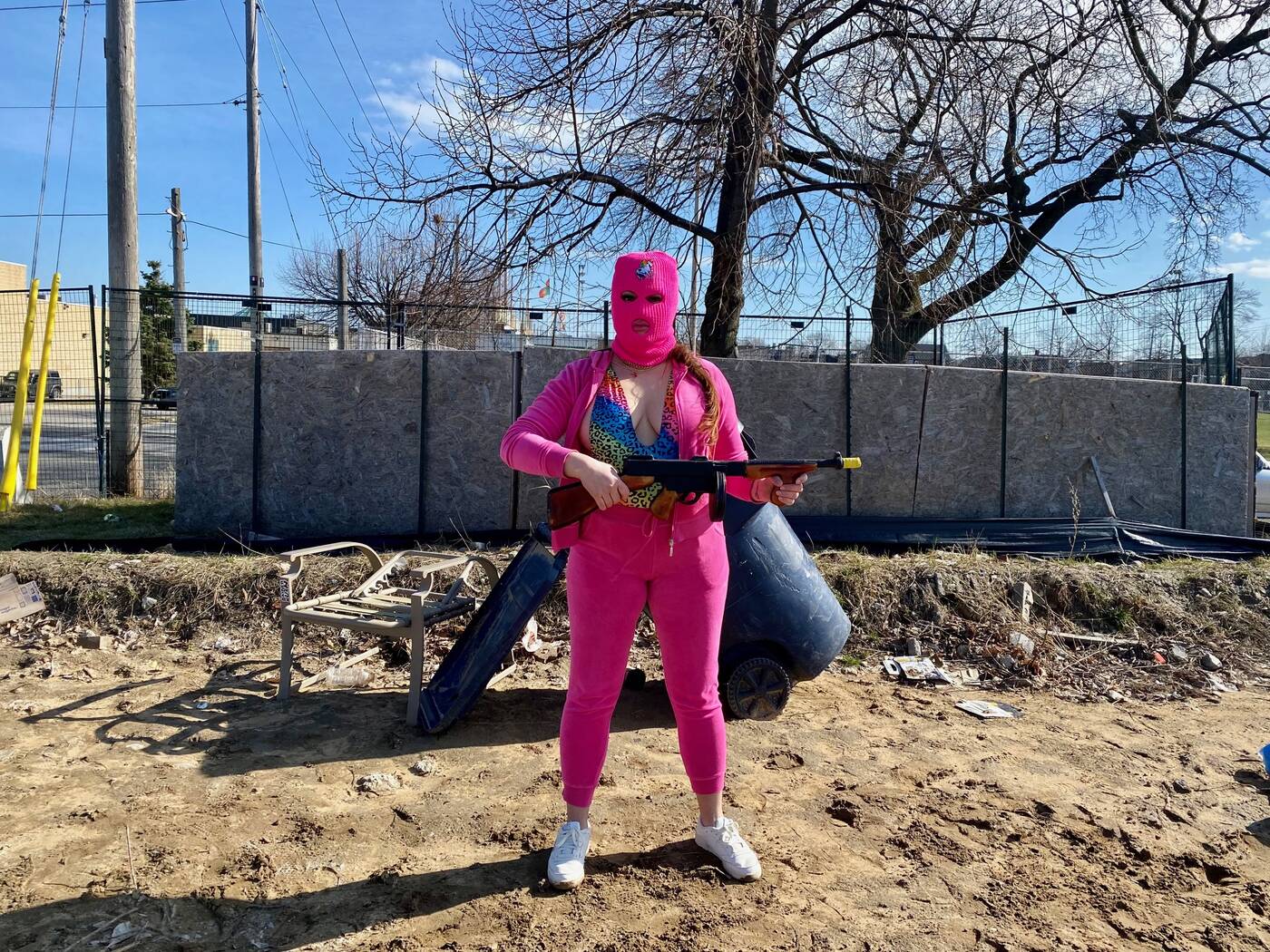 Police were called to where the group was filming, but didn't approach them. Photo by Tanya Cheex.

"There's a scene where James Franco sings Spears' 'Everytime' to his masked female bandits. We wanted to pay homage to that scene but make it appear that we were Britney justice warriors and what better place to film it than the infamous Bloordale Beach," says Cheex.

The show is scheduled to be broadcast on Zoom on Apr. 14, with the link provided once you PayPal over the $9.99 cover. Betsy Swoon, DD Starr, El Toro, Allysin Chaynes, Forca, Dolly Berlin, Aviva the Mirage, Laura Desiree and Tanya Cheex will be featured in the show. A portion of proceeds from the show will go to community organization Maggie's.

There'll also be go-go dancing and a DJ spinning tunes, as well as a draw for prizes from local businesses that sponsored the show, and you can expect full audience interaction.

"If you like your Britney with a side of subversive, this is the show for you," says Cheex. "Grab your Cheetos and frappuccino and get Toxic with us."