It's a stark mid-January Monday afternoon and Chinatown is slow by its standards; time and rime have lent the streets a placidity interrupted only by the muffled dancehall bass of an idling Uber and Falun Dafa speaker reverb.

Some of those shuffling up Spadina on the 11th may have known that Toronto was days away from entering its second COVID-19-related state of emergency, but no one was walking like it.

Closer to College, Spadina is quiet enough for a spirited conversation to carry, like the one happening at the open door of Gwartzman's Art Supplies.

An older person stands on the sidewalk with their hands in their pockets and a Gwartzman's bag hanging off-wrist; their raucous rapport with the clerk suggests a lengthy acquaintanceship.

A couple of metres away, a much younger customer stands in queue; when they approach, they're greeted with similar warmth. 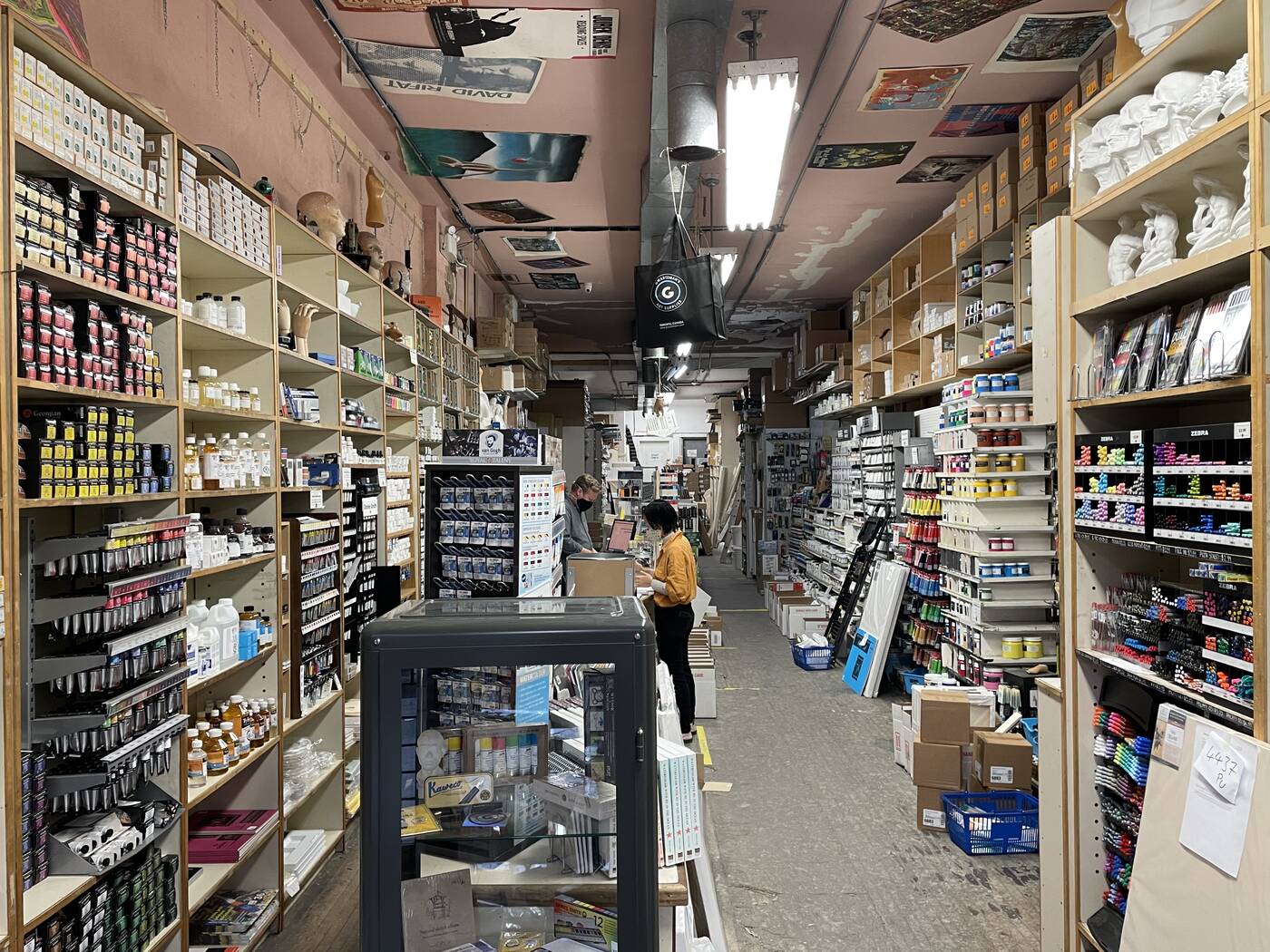 When I arrive, Jacklyn Gwartzman is not yet available. The clerk waves me inside to wait for her. Besides the staff's masks and the rows of pick-up orders outlining the threshold, months of operating under lockdown haven't changed the store much.

Like it has for over half a century, the narrow expanse teems with paints, pens, brushes, and canvases, its walls and high ceiling chaotically tacked with posters for long-past art exhibitions.

New to the decor since my last visit is the photograph of the late Paul Gwartzman above the front door. Taken somewhere in the store, it depicts Mr. G, as he was affectionately called by his friends and family, dapper in a tucked scarf and thick-framed glasses, his grin rakish and broad. 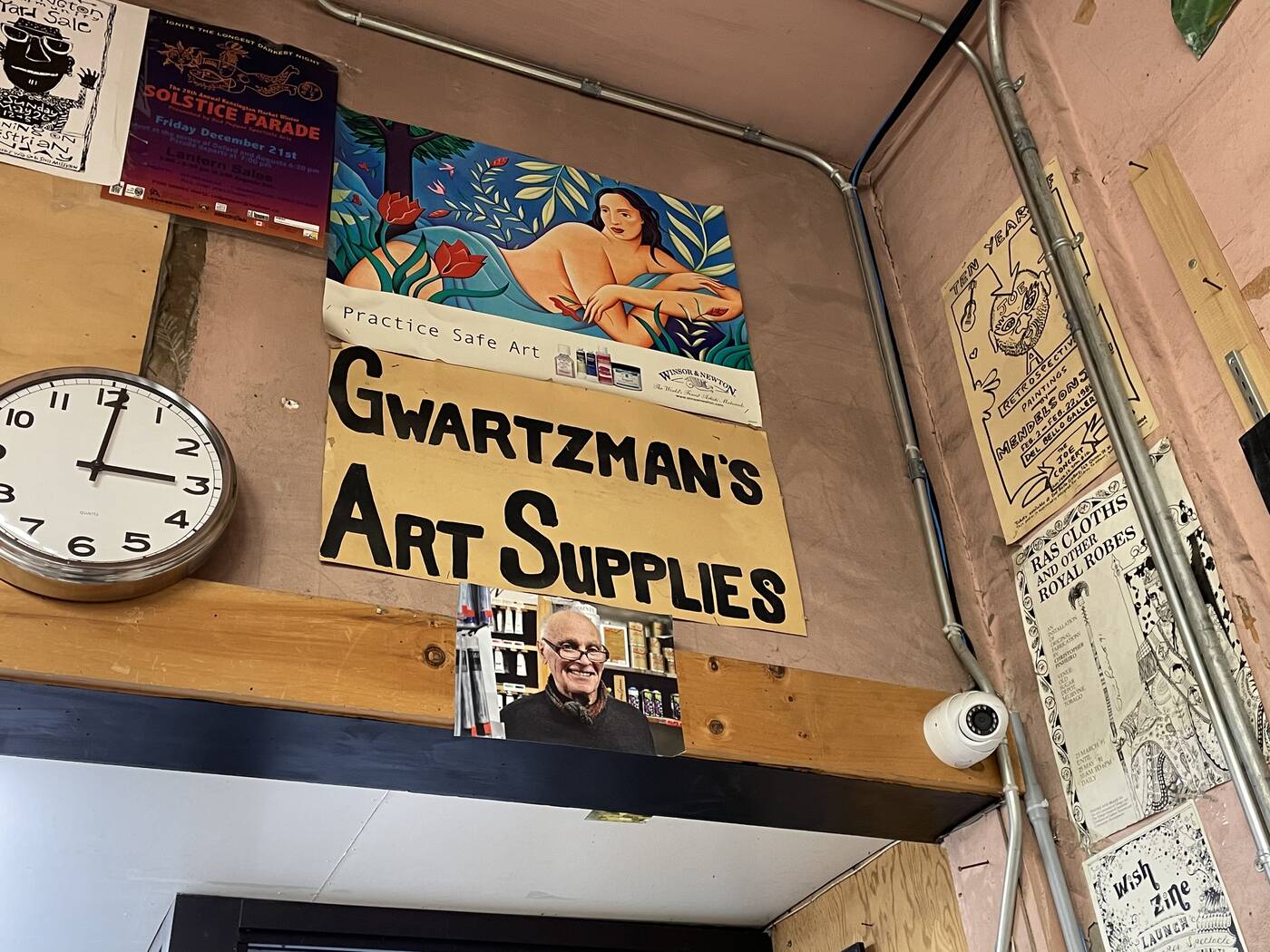 A photo of the late Paul Gwartzman, or "Mr. G", hangs above the door.

Jacklyn Gwartzman has some of her father's fashion sense, though it's tricky to imagine him wearing a sequined face mask with her aplomb.

In search of a less-busy place to speak, she takes me up the stairs in the back of the store and through a small-but-bustling fulfillment department into a room overlooking Spadina.

Here, there's a few chairs and a table, but most of the space is occupied by large, blank canvases and oversized rolls of craft material.

The Gwartzman family has been in Toronto for nearly a hundred years. Jacklyn's grandparents came to the city around 1925 and took up residence on Baldwin Street, abuting the neighbourhood known then as the Jewish Market and contemporaneously as Kensington Market.

"My grandparents lived near Mount Sinai Hospital. They started a small fabric business out of the front of their home and lived in the back," she said. "A few years later, they expanded to a storefront at 421 Spadina. In 1945 they moved to 448 Spadina. We've been here ever since."

Gwartzman's at 448 Spadina originally opened as a drapery. It was Paul's idea to begin selling art supplies.

"In the 60s, this neighbourhood was changing, just like it is now. Rent was cheap, so there were studios all over the place. Artists would come by and talk to my dad; while schmoozing and getting to know each other, they would ask my dad for canvas. 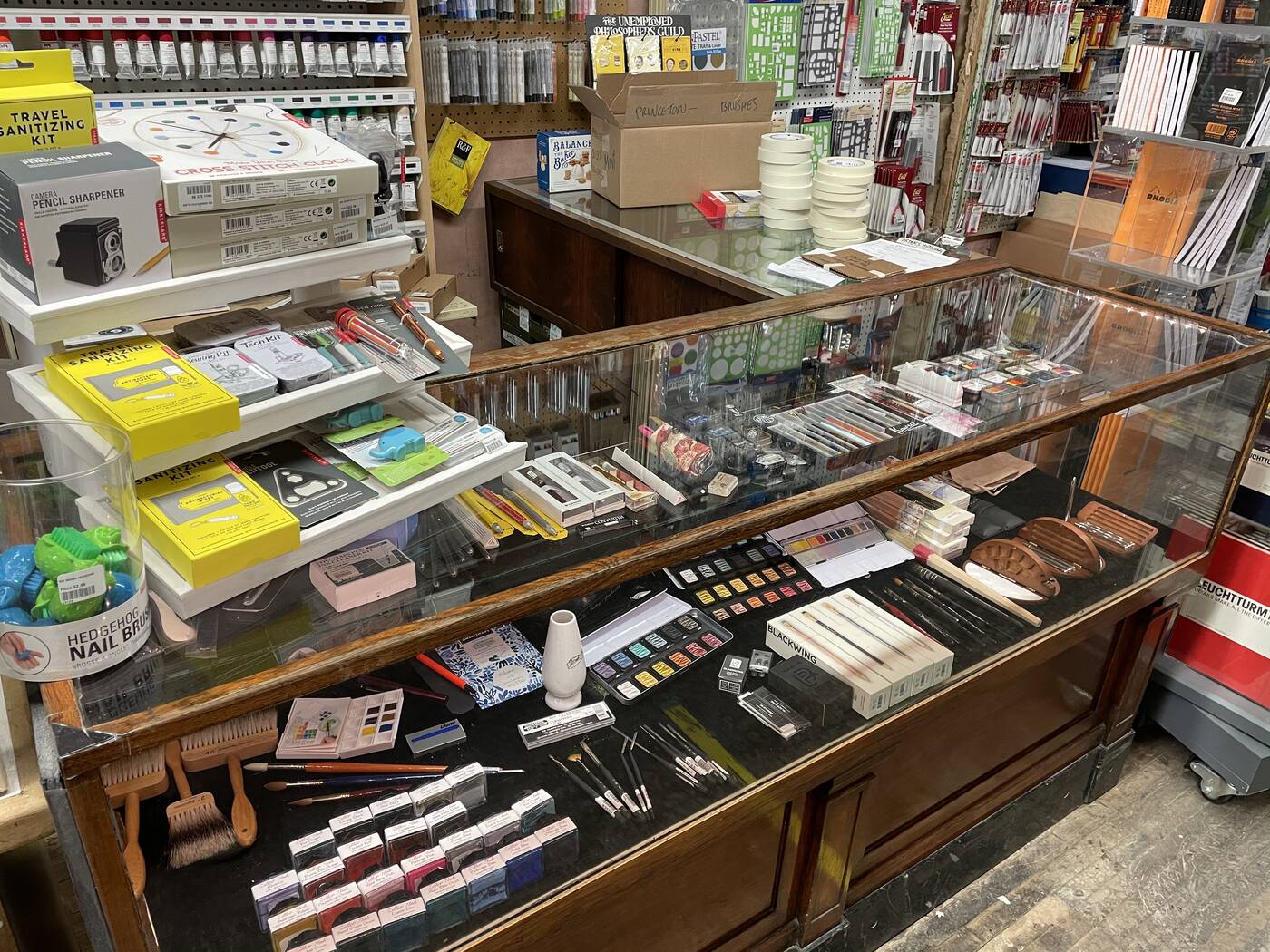 It's well-stocked and budget-friendly.

Jacklyn, Paul, Jacklyn's mother Sorrell, and her brother Neil visited trade shows around the world, establishing relationships with suppliers and sourcing new products. Today, the store manufactures many of the supplies they stock under the Gwartzman's brand.

When her parents retired, Jacklyn took over the operations of Gwartzman's Art Supplies; even after she did, Mr. G was there daily, assisting and conversing with customers new and old alike from his place behind the counter.

"I was in my twenties when I started working full-time here. I worked with my dad almost every single day for over forty years. It's amazing, when I think about it. He was a great mentor. He taught me about taking chances." 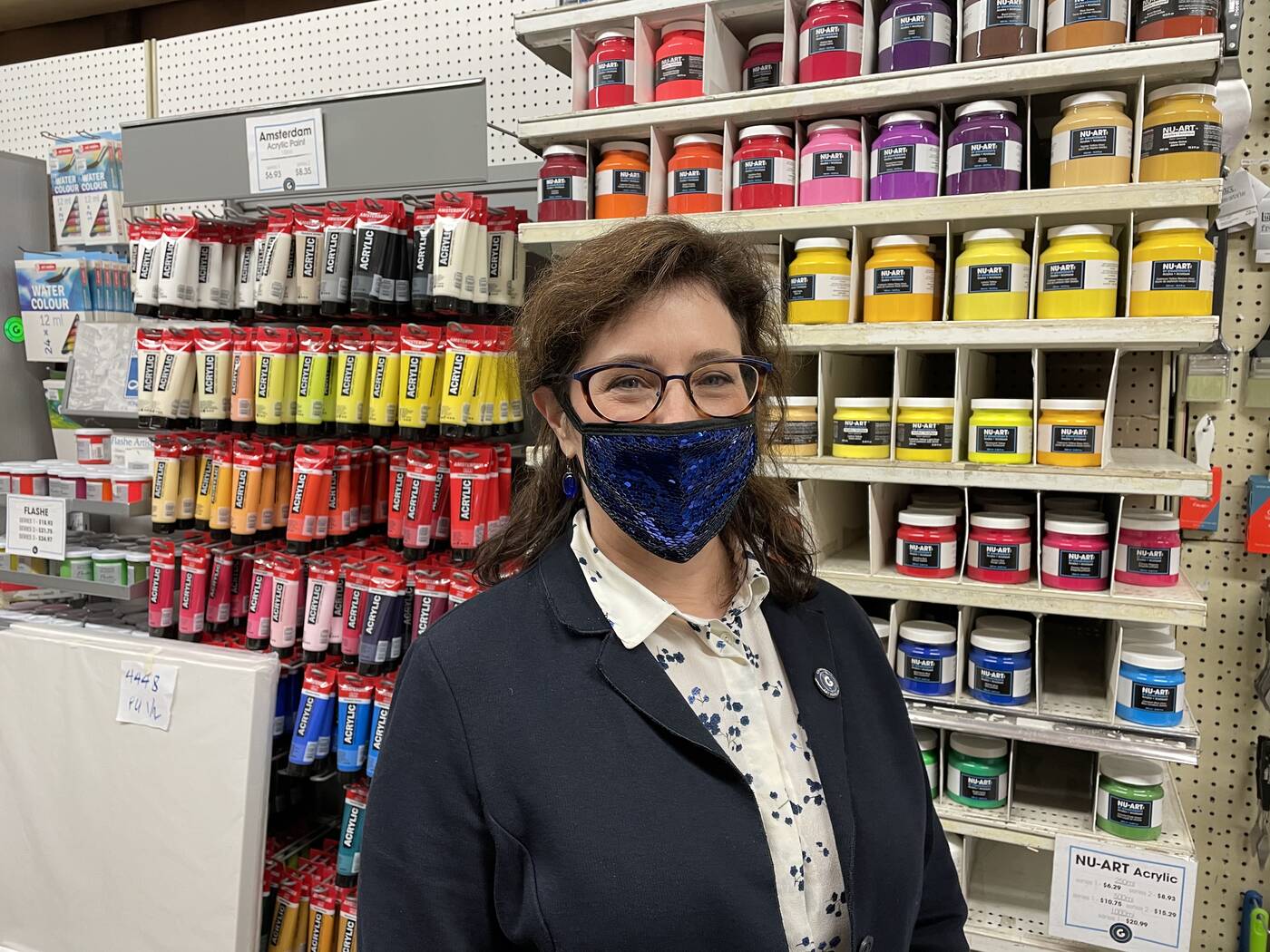 Unable to take full advantage of being a landmark store in a historic building in a well-trafficked neighbourhood, Gwartzman's focused their attention on bolstering the store's online presence. The store did not have a full website up until the beginning of February 2020.

"We've been sustained by a combination of people we've known for a long time and by people we haven't met. With the website, we've been able to reach people that may not have known us across Canada.

"We do a lot of live chats, both events and informal, so people feel that there's a connection between them, the artists, and the suppliers."

Prior to the pandemic, Gwartzman's sponsored arts events and programs citywide, providing supplies to organizations like Out of the Cold and benefacting showcases like the Toronto Outdoor Art Fair and the Riverdale ArtWalk.

During lockdown, Gwartzman's has been diligently promoting individual artists on their social media channels.

"People know we're not a new company. Our walls are old, our floors are old. People seem to like that. We're embracing our age; we've done a few video tours showing off the building."

"A lot of people feel alone right now. We just want to encourage them to keep creating their art. We've always felt that art is a healer. We want to make sure that people understand that, for art, there is no right or wrong. Just do it. Just try something." 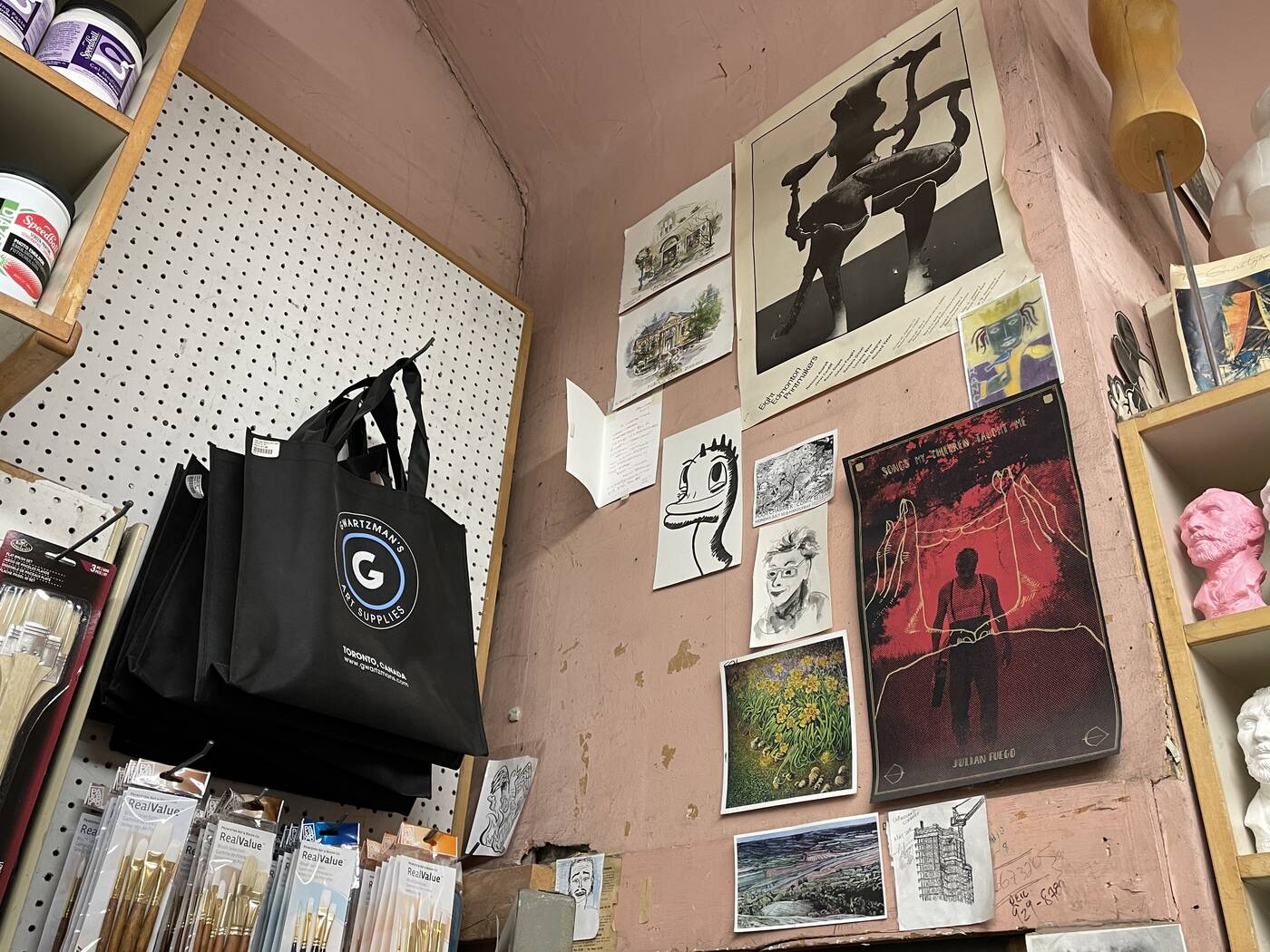 Gwartzman's Art Supplies has thrived as a small, family-owned business.

Jacklyn's perspective on the role of art is coloured heavily by her father. Paul's support of it and of those who create it has shaped her life significantly.

Paul Gwartzman passed away in his home near Cedarvale Park on February 14th, 2019. Until the couple of weeks before his passing, he manned the counter at Gwartzman's every day.

"That was a testimonial to how much he enjoyed what he created. He loved it - the challenge, the interest, the people that he met. He really believed in what he did."

That Gwartzman's Art Supplies has thrived as a small, family-owned business for as long as it has is laudable.

Its ongoing success is largely attributable to the effort the Gwartzmans invest in cultivating relationships with the communities and individuals they serve. 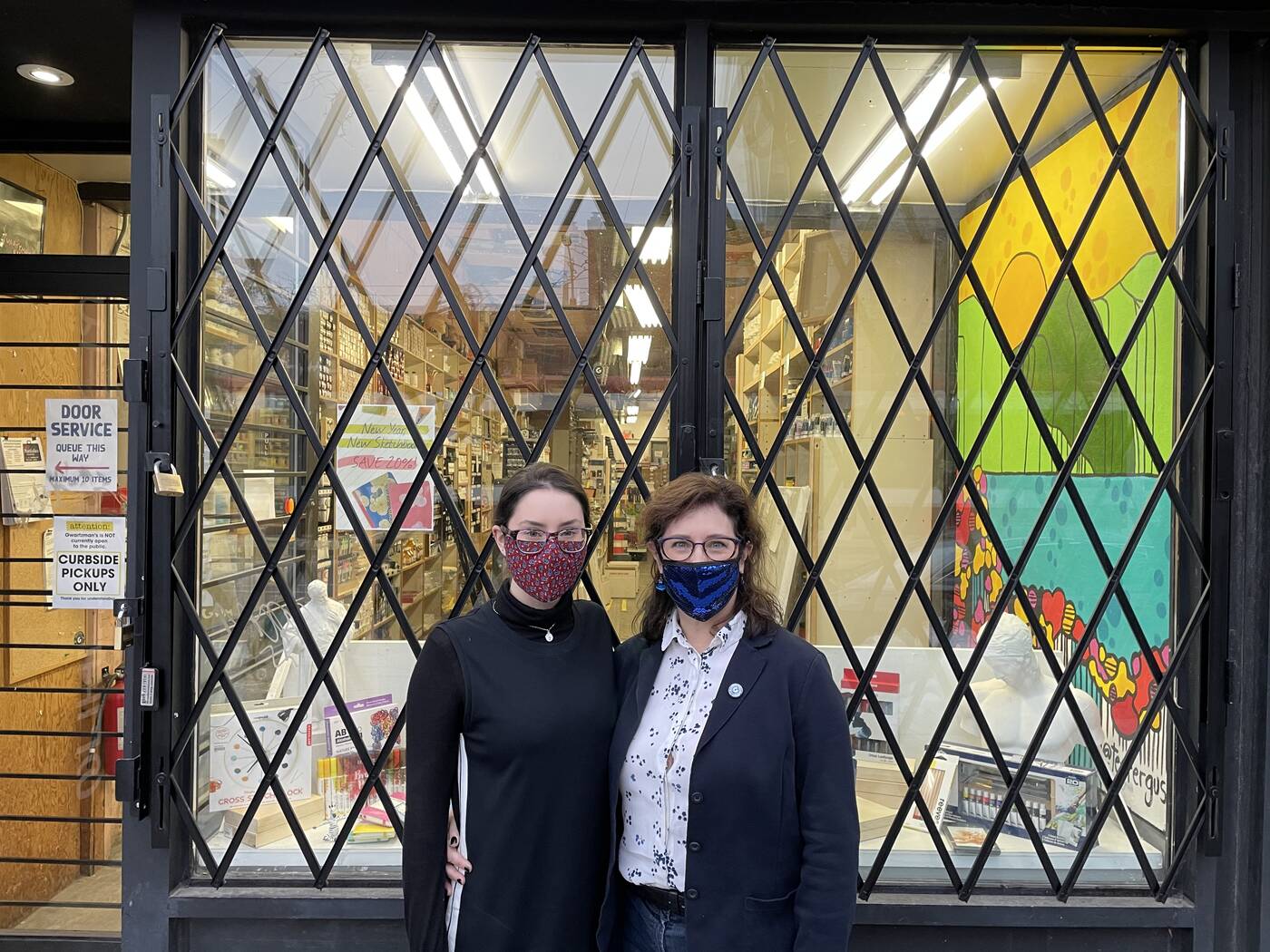 Jacklyn's daughter Michelle is currently employed handling the company's customer service correspondence; Jacklyn hopes that Mr. G's legacy will continue for a fourth generation and beyond.