Taking on the theme of The 21 Club, Power Ball transformed the venue into an artistic speakeasy complete with consumables in the form of art, drinks, and performances. 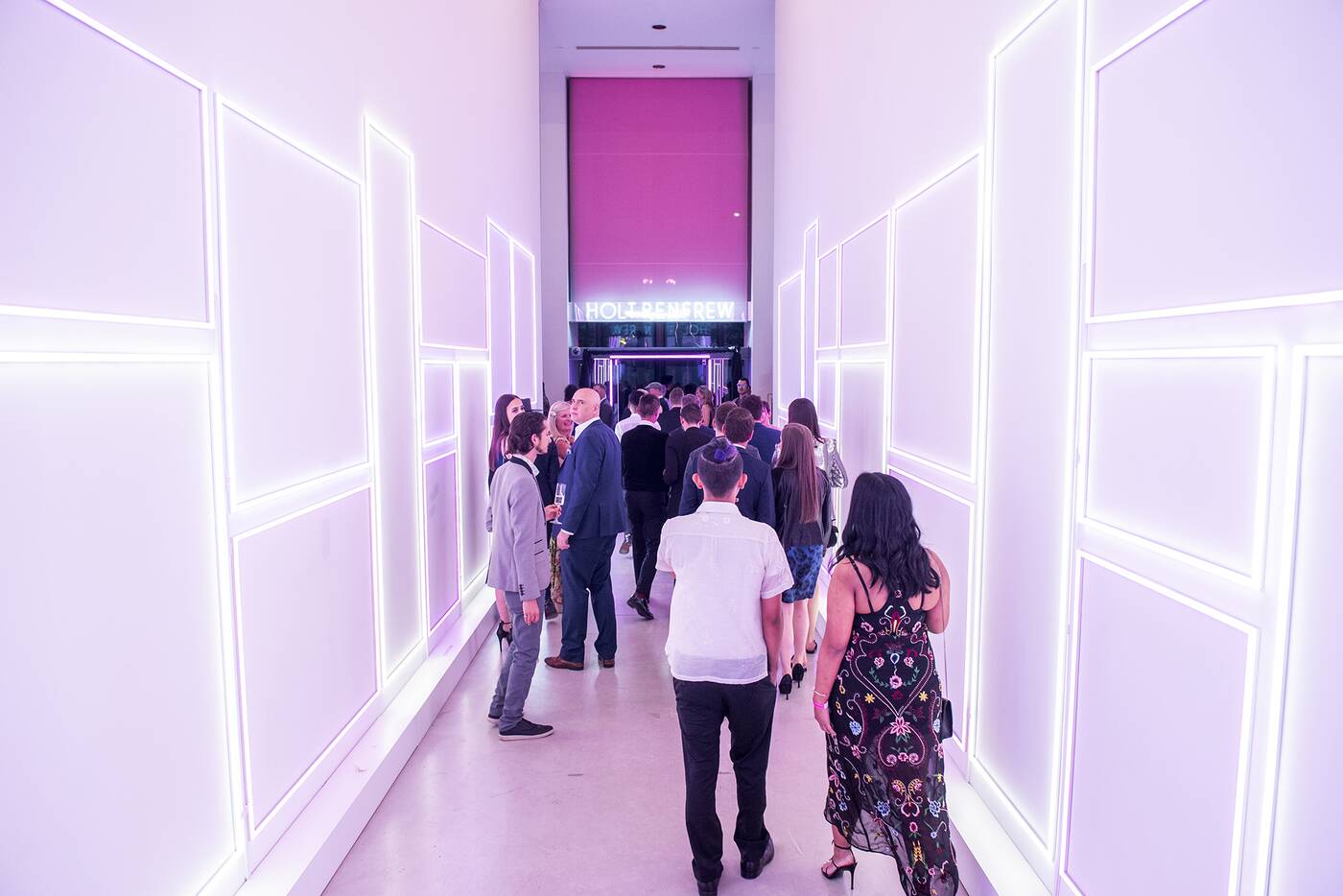 Personally, I would consider Power Ball to be one of Toronto's best and most fun events. It always celebrates extreme hedonism with a thin layer of edge, which is exactly the 2019 mood I'm going for. 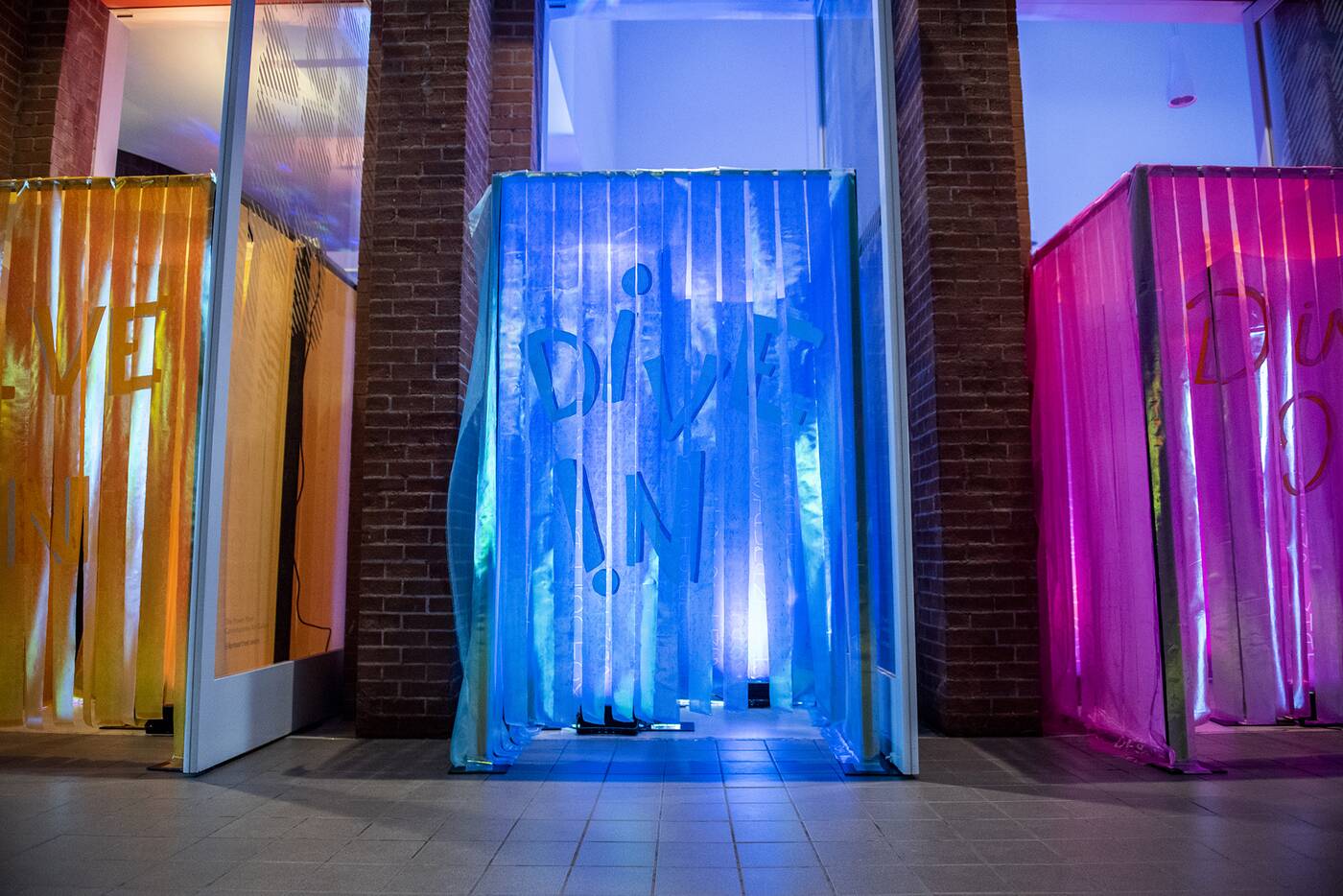 The press release even has all the phrases I like: "grit, glitz, and glamour," "illicit speakeasy," and "desserts by Krispy Kreme." 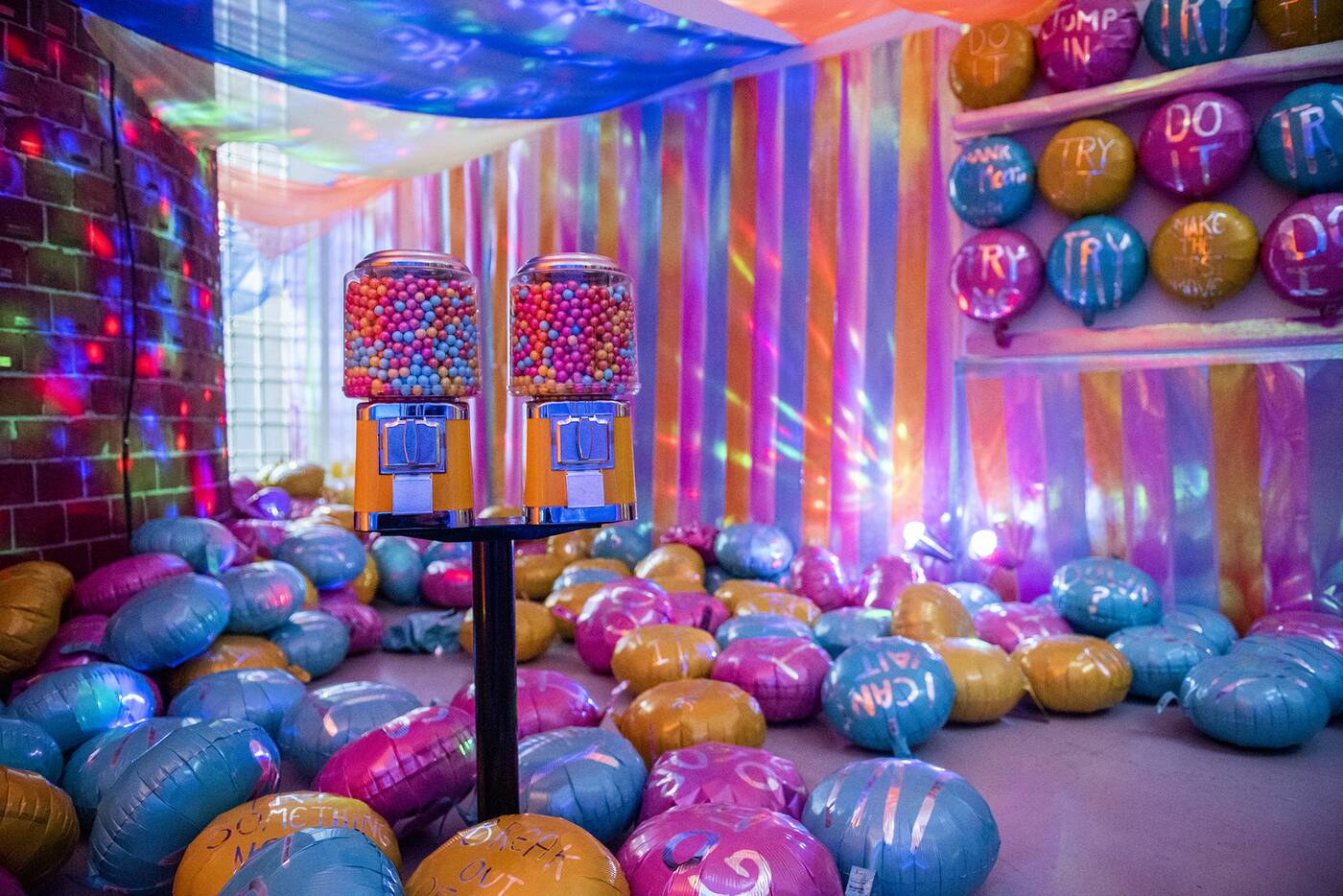 In order to stay humble, I made sure to take an Uber Pool to the venue and cut my own bangs mere moments before leaving my house. 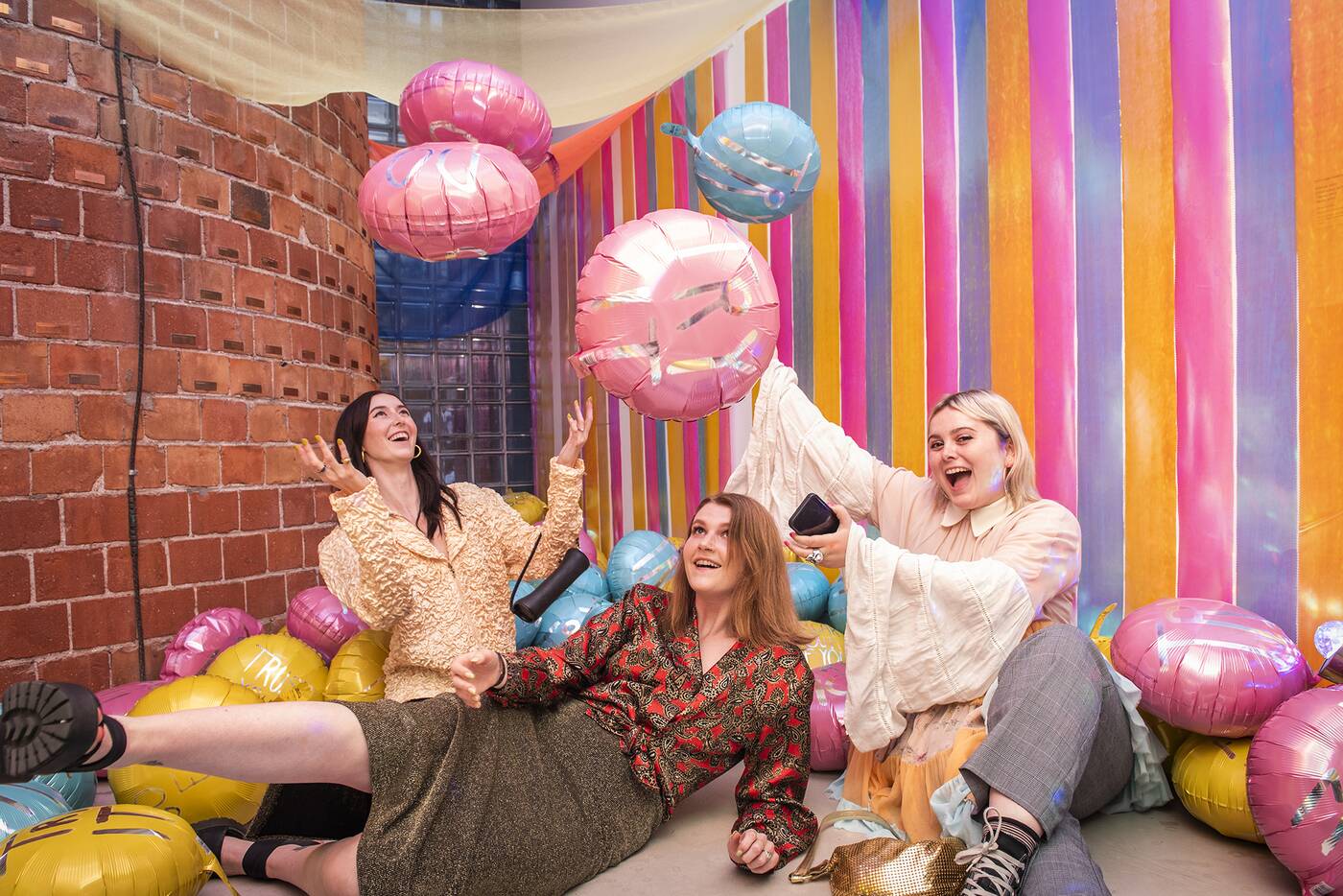 Power Ball consists of a pre-party from 7 to 9 p.m., and then a larger party from 9 p.m. until late. 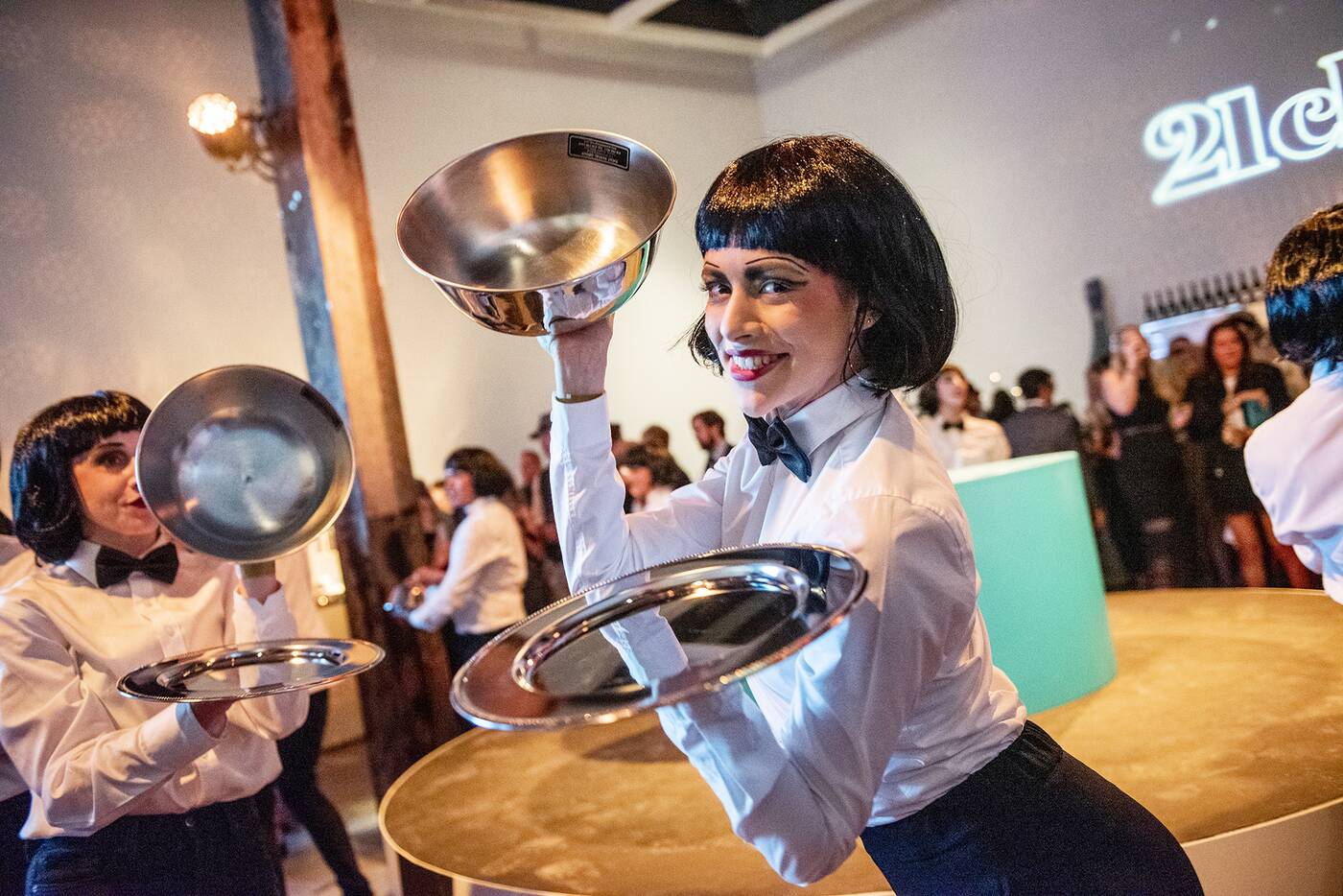 Going into the pre-party, everything looked opulent. As designed by Sarah Keenlyside, the main space was decorated with a huge lobster hanging from the ceiling amidst disco balls and people hanging from chandeliers doing acrobatics. 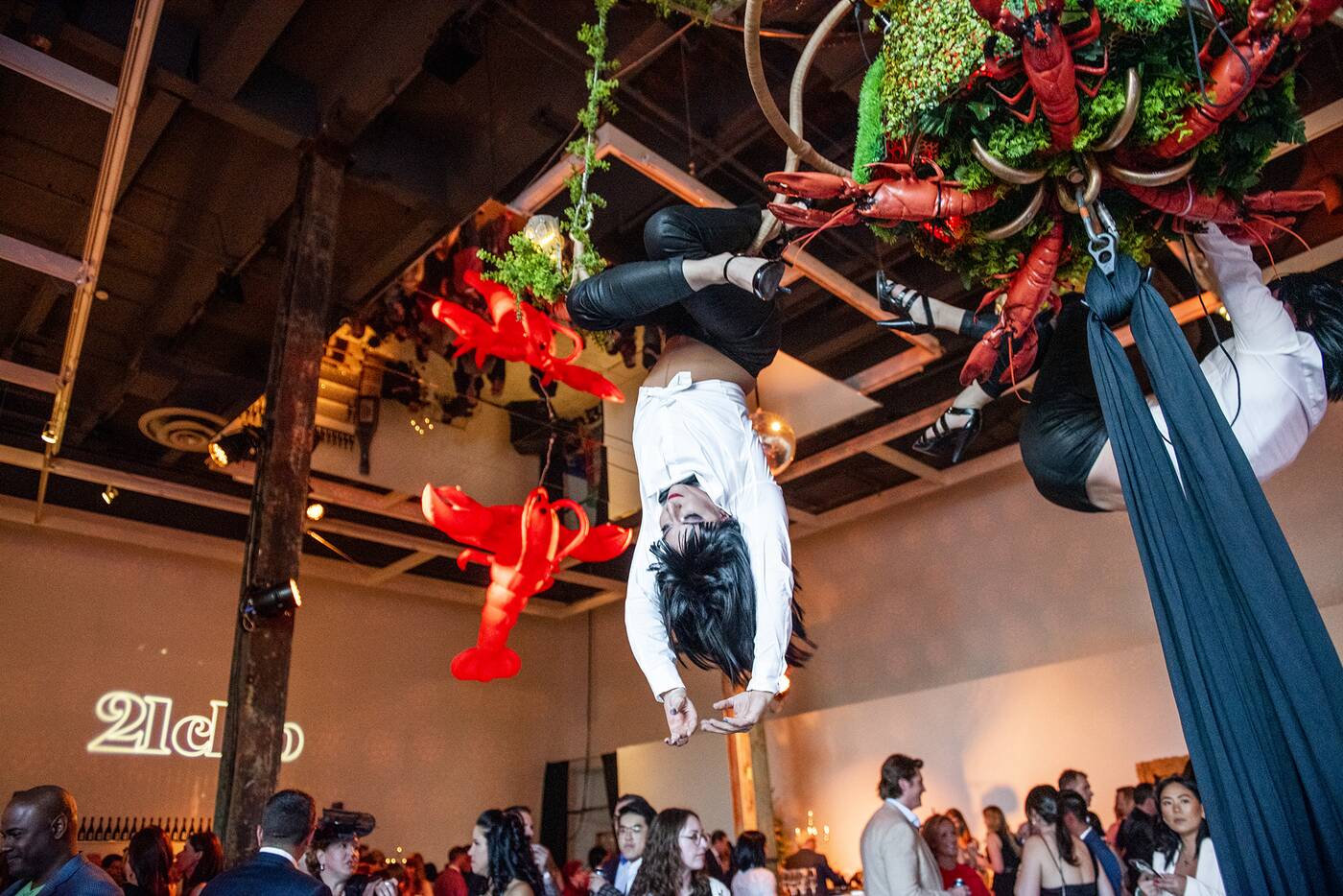 There were food stations with delicacies like cheese fondue and a chocolate fountain lining the perimeter, plus passed apps with eats like tuna with brown butter. 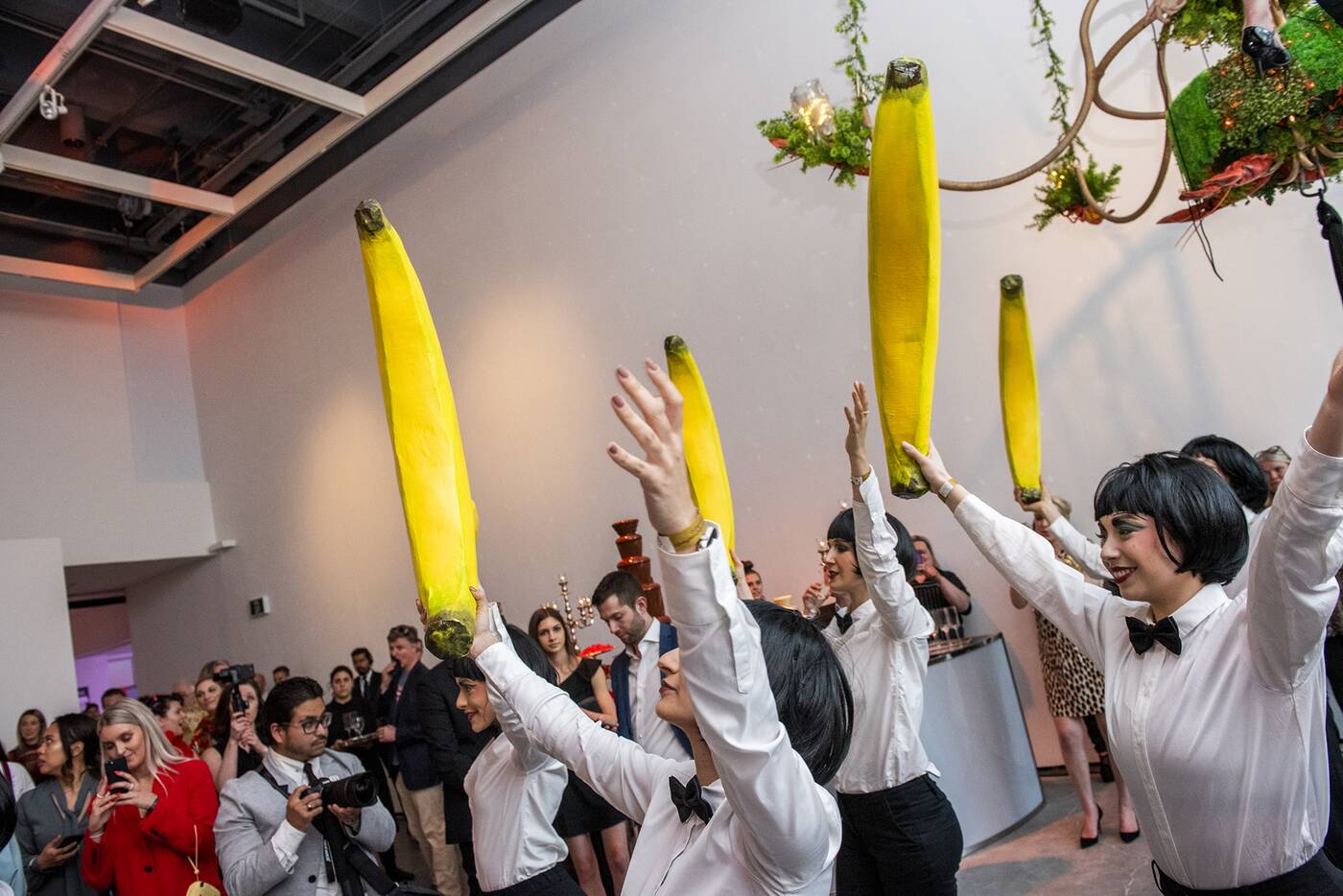 In the middle, there was a platform that everyone respectfully and correctly didn't go near, and around me, there were tons of different people, from a beautiful person in a chaquetilla to a woman in gorgeous '70s caftan, to one man in a t-shirt that read "art makes you happier."

After a bit of mixing and mingling wherein an older woman assumed I worked there and tried to give me an oyster shell, a team of dancers made up to look like Liza Minnelli performed an act with domes and plates on the coveted platform, and then later with large faux bananas, accompanied by a wonderful brass band. 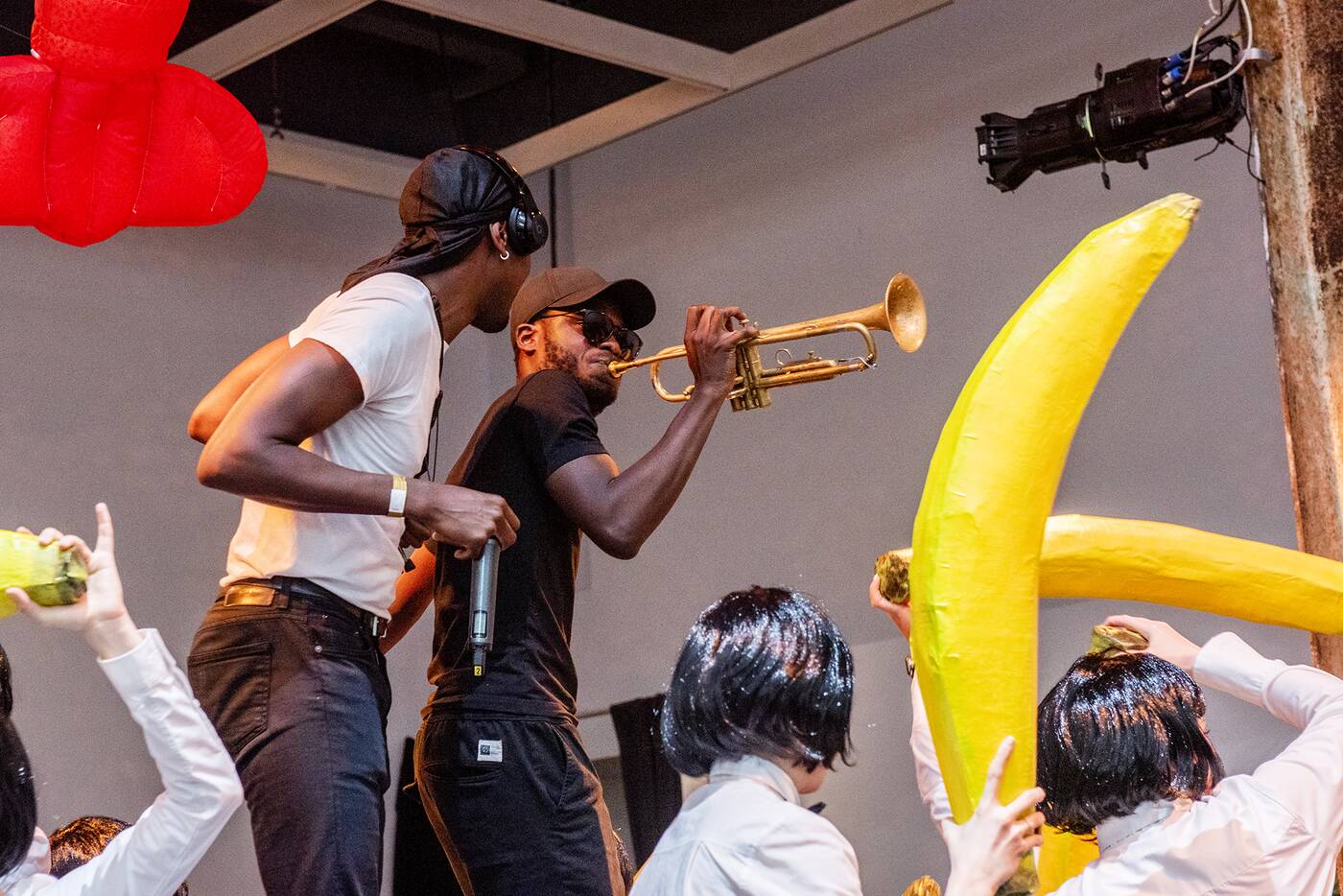 One of the best parts of Power Ball is discovering all the little details all the artists added in, like sneaky Game of Thrones Easter eggs. 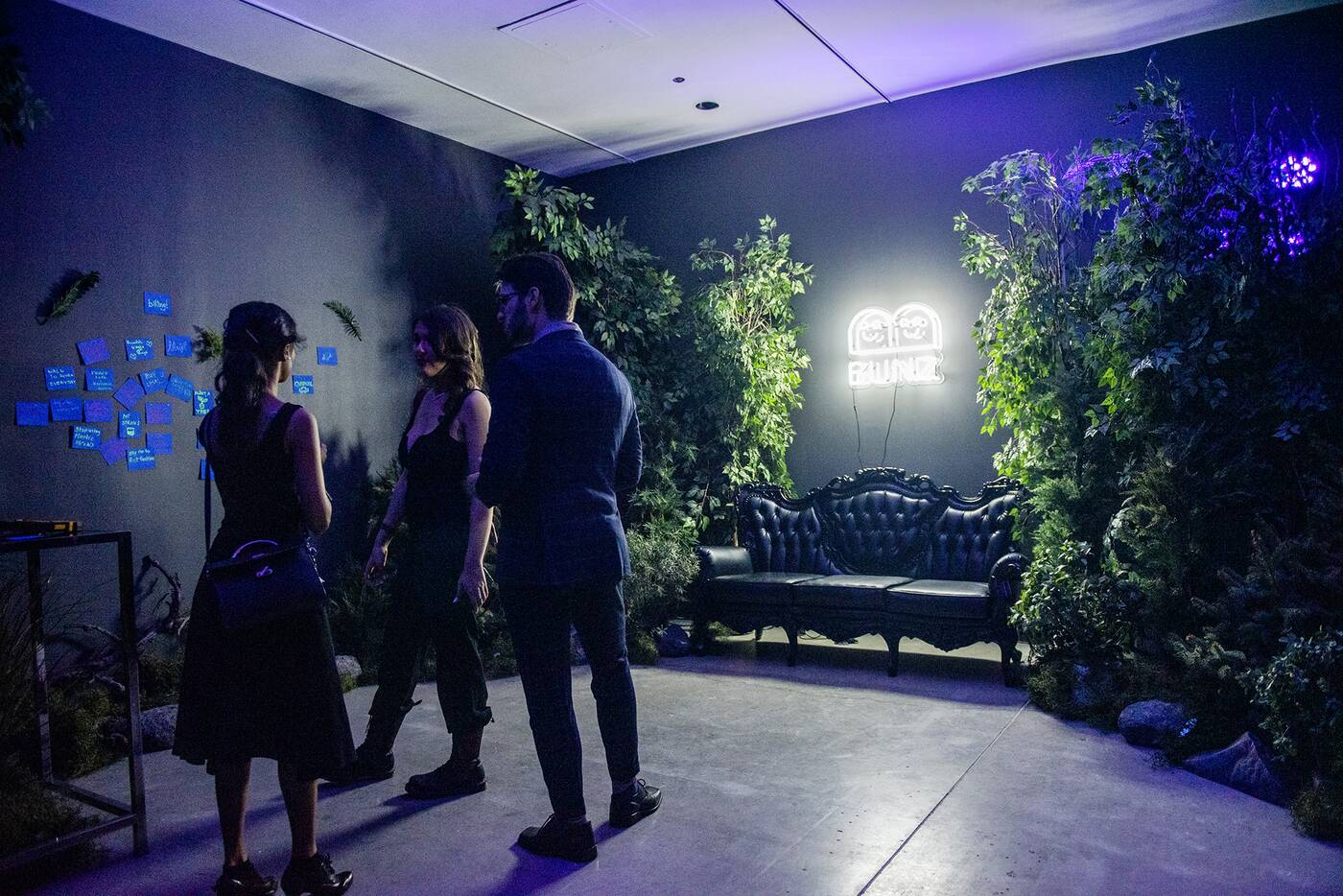 My favourite was all the hidden rooms, including a cool space from Bunz that promoted sustainable living, a chill spot playing a black-and-white movie by candlelight, and an adult Chuck E. Cheese-eque ballroom but with balloons and gin instead of urine-soaked plastic balls and mustache combs. 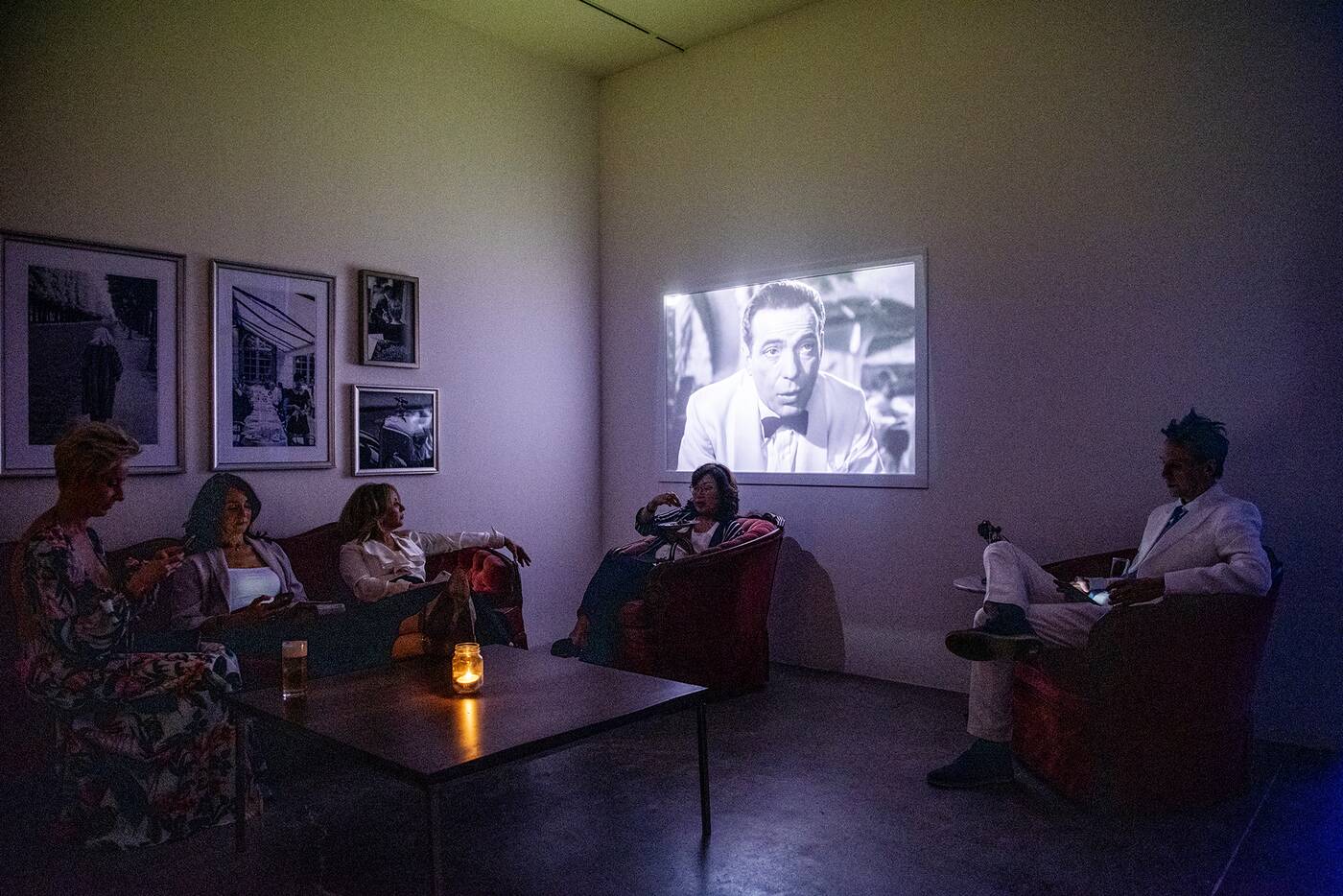 As the pre-party morphed into the actual party, the space opened up. On the other side of the Power Plant, there was a large space that led to TRON209, one of the highlights of Power Ball for me. 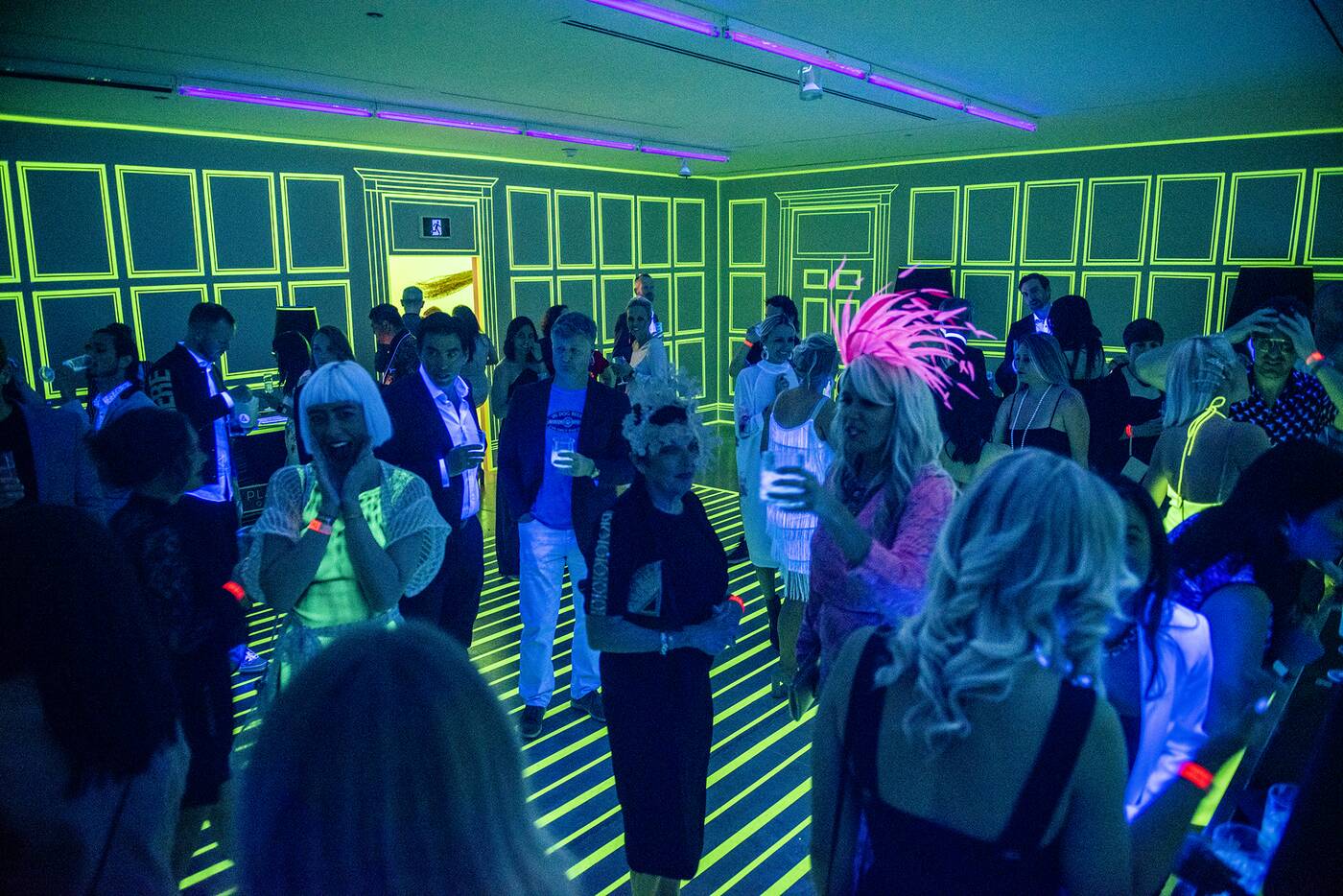 TRON209 was a blacklit room from Bruno Billio that felt very futuristic and robot-chic. 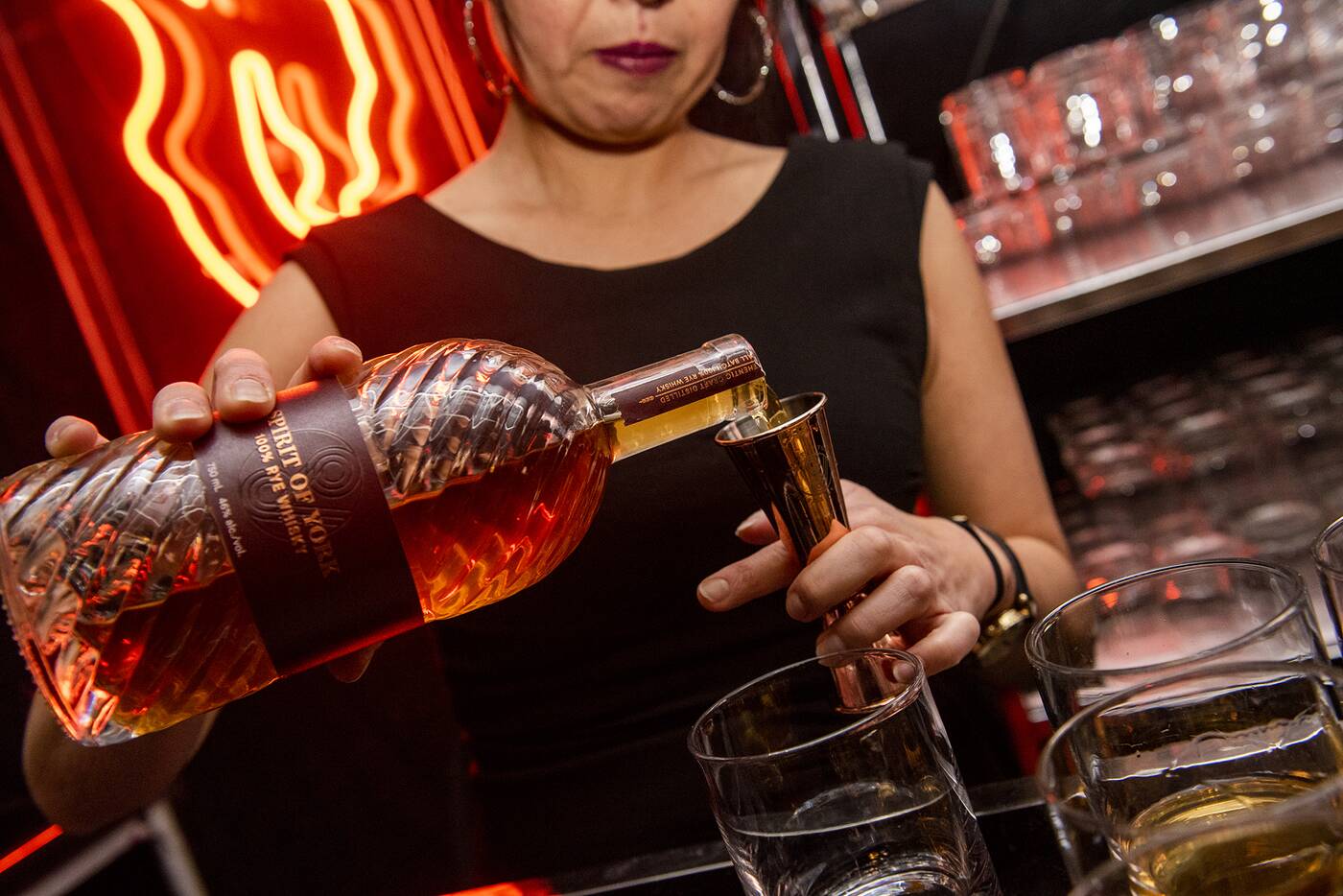 There were drinks from Spirit of York and food from Planta Queen, among others. 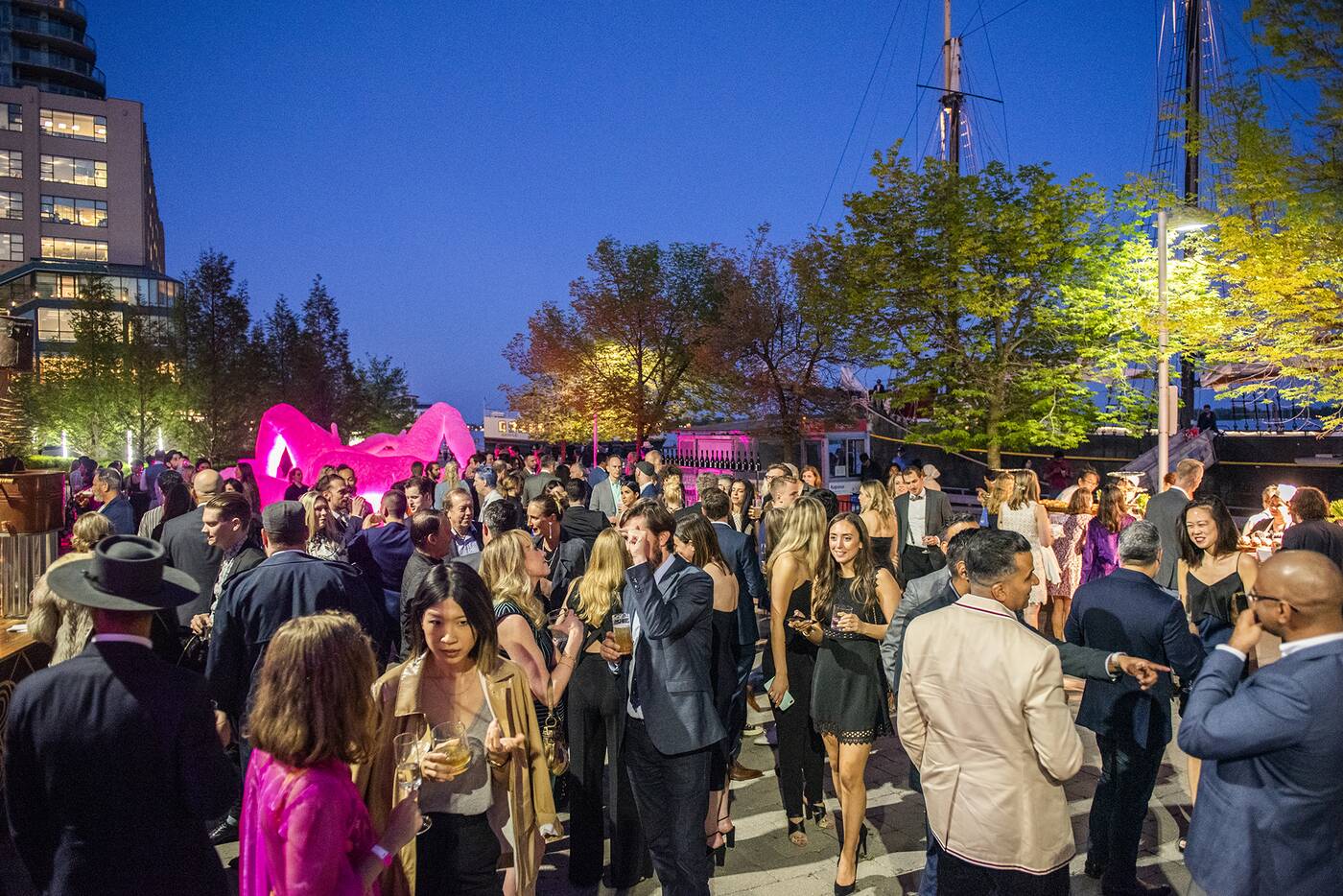 Outside, there was a large area for drinking, dancing, and dishing, plus a huge and amazing work from Max Streicher, Sleeping Giant, that looked very similar to intallation currently at the Distillery District. 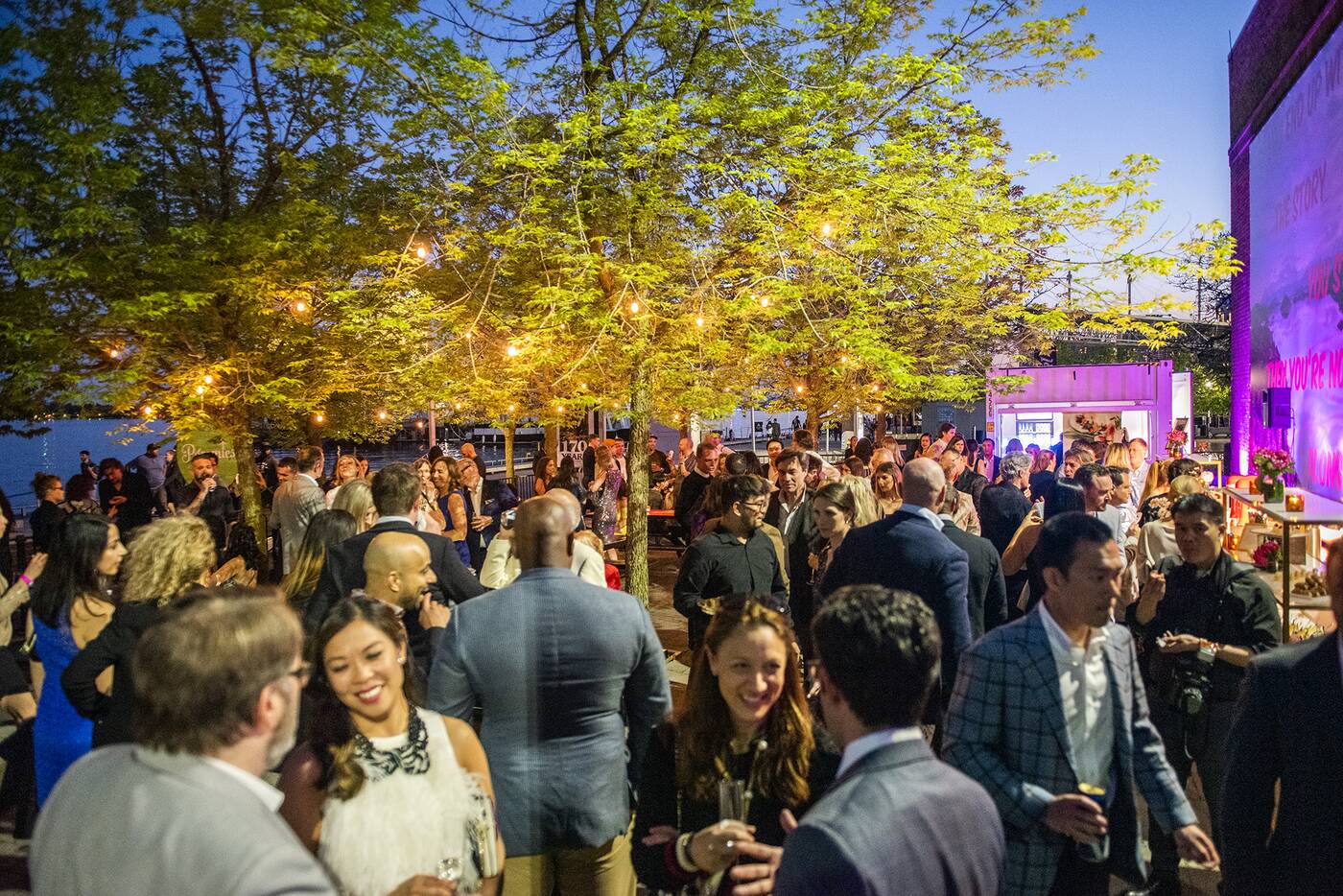 As the night went on, the Power Plant filled up until it was certifiably bopping. 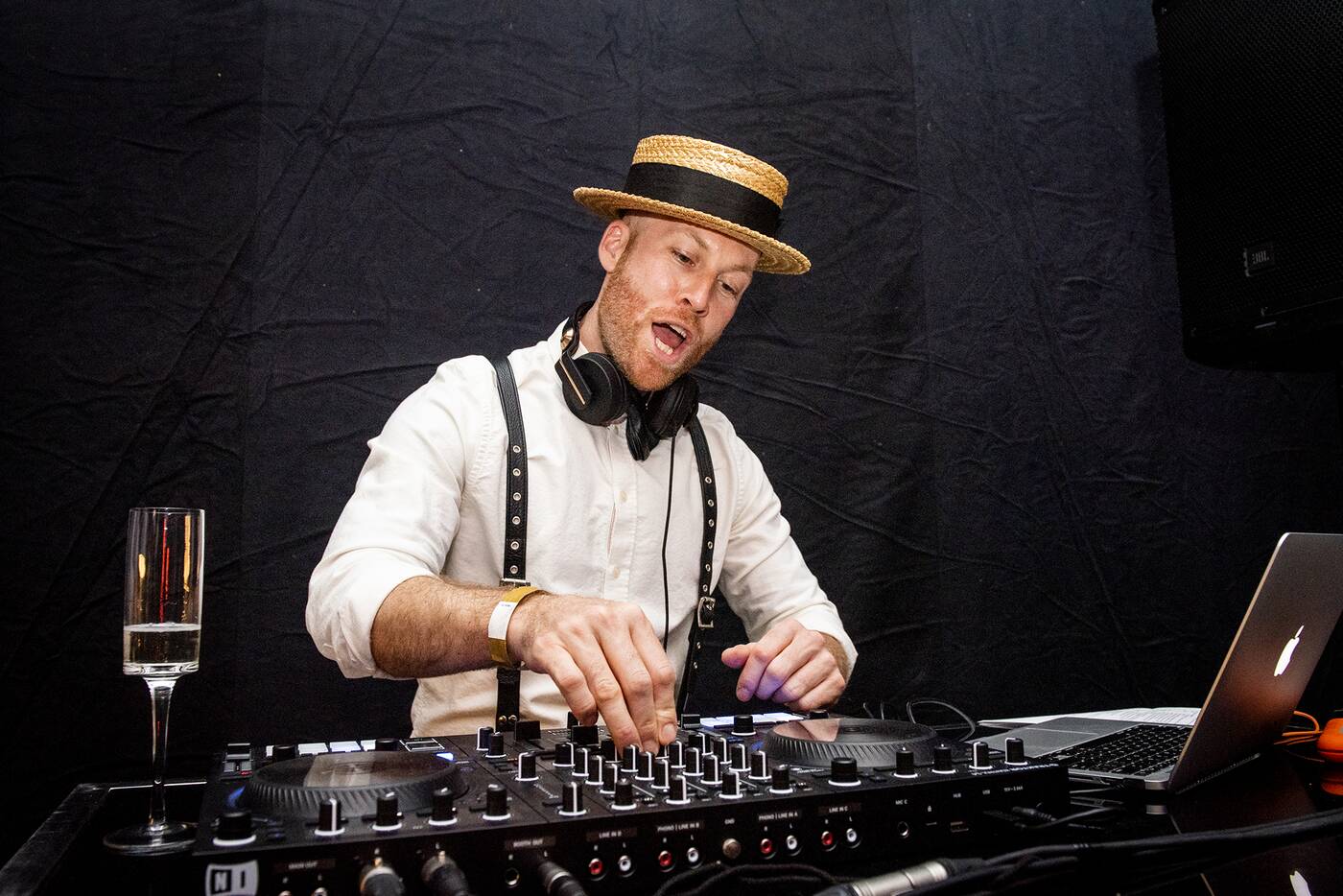 This was assisted by founder of YoHomo.ca and blogTO alumnus Phil Villeneuve on the DJ beats, and also by the incredible performances as part of Power Ball. 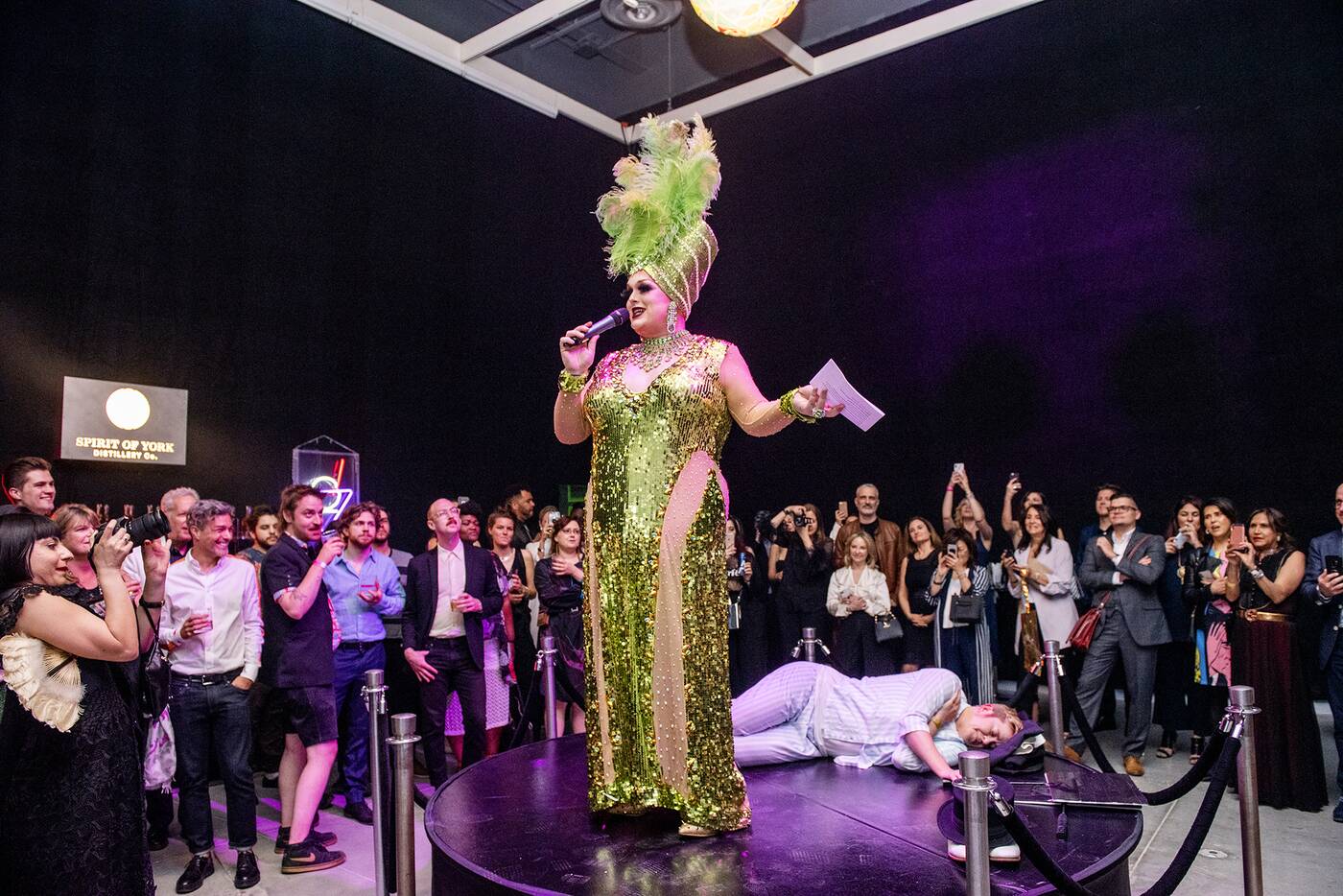 This year, Power Ball was treated to performances from some of Toronto's best drag and burlesque artists.

The line-up included performers like the powerful Dainty Smith and Toronto legend Tynomi Banks, but Power Ball really felt like it started when Gay Jesus took the stage.

Performing a lip sync that was not only entertaining but also meaningful, Toronto drag icon Gay Jesus was equal parts exciting, mysterious, and edgy, which is exactly what art should be and why we should be celebrating it. 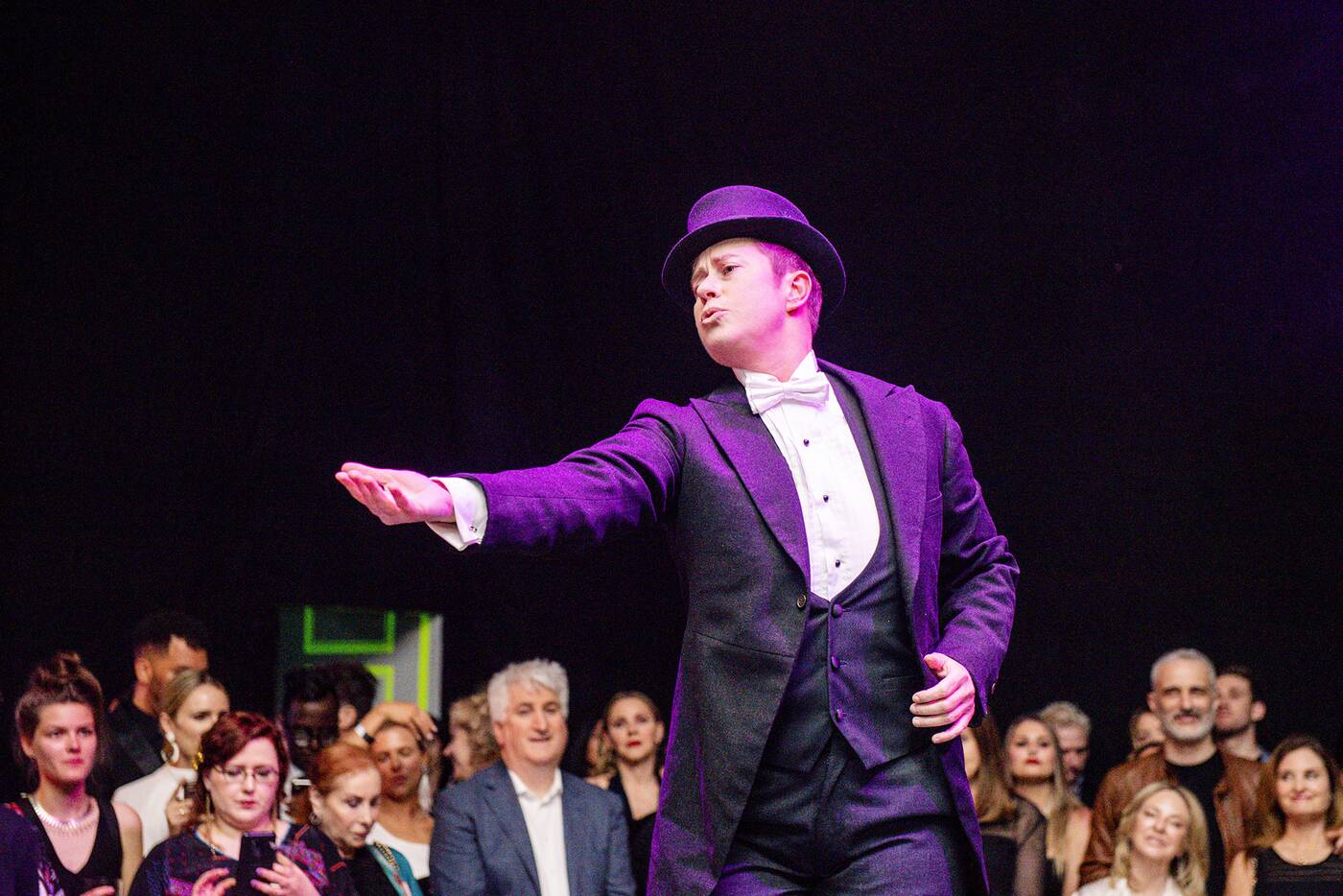 As I left, I was lucky enough to eavesdrop on some conversation, including two guests who were arguing about the Power Ball hashtag and another woman who casually mentioned to another partygoer that she once bought a painting while she was on mushrooms. 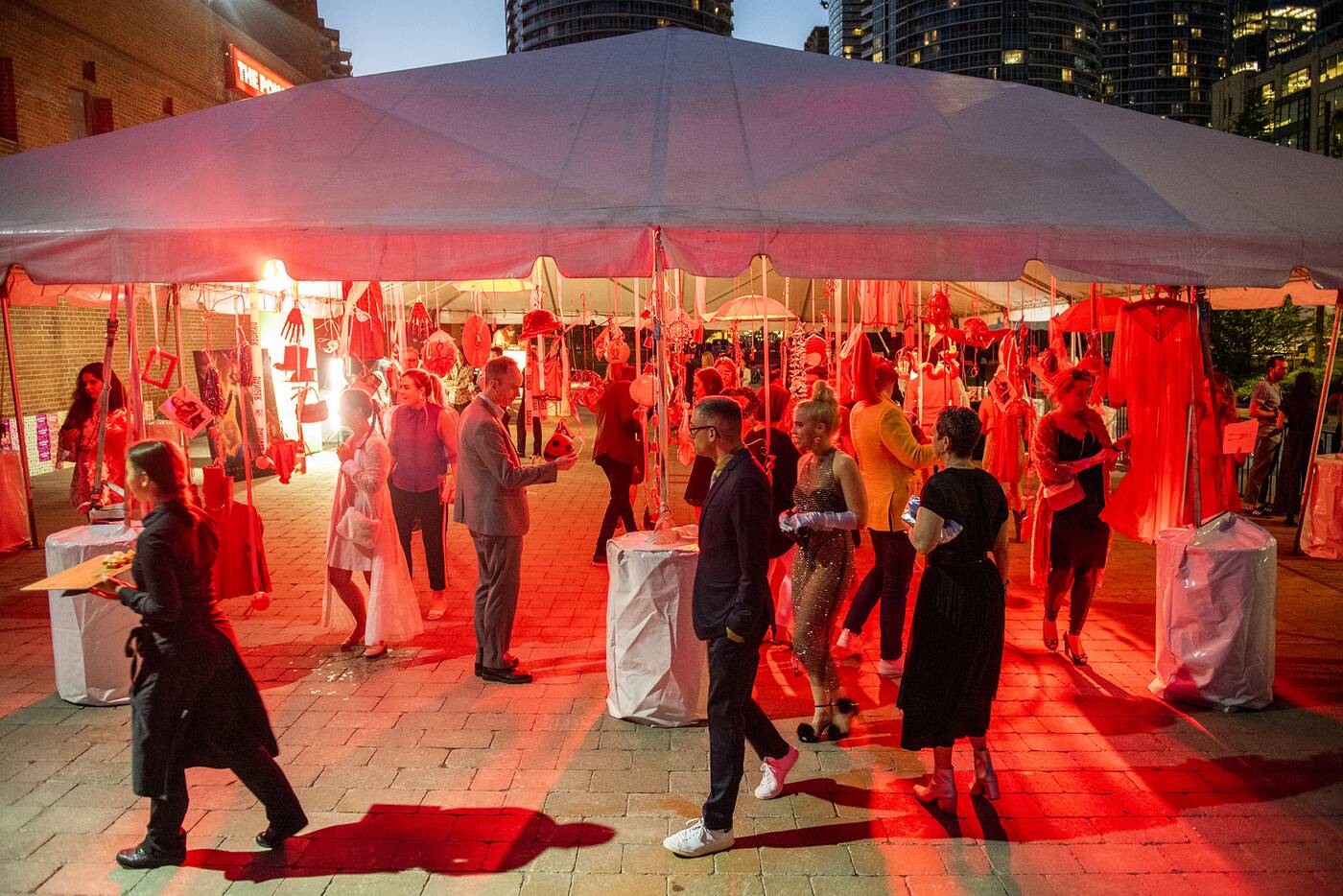 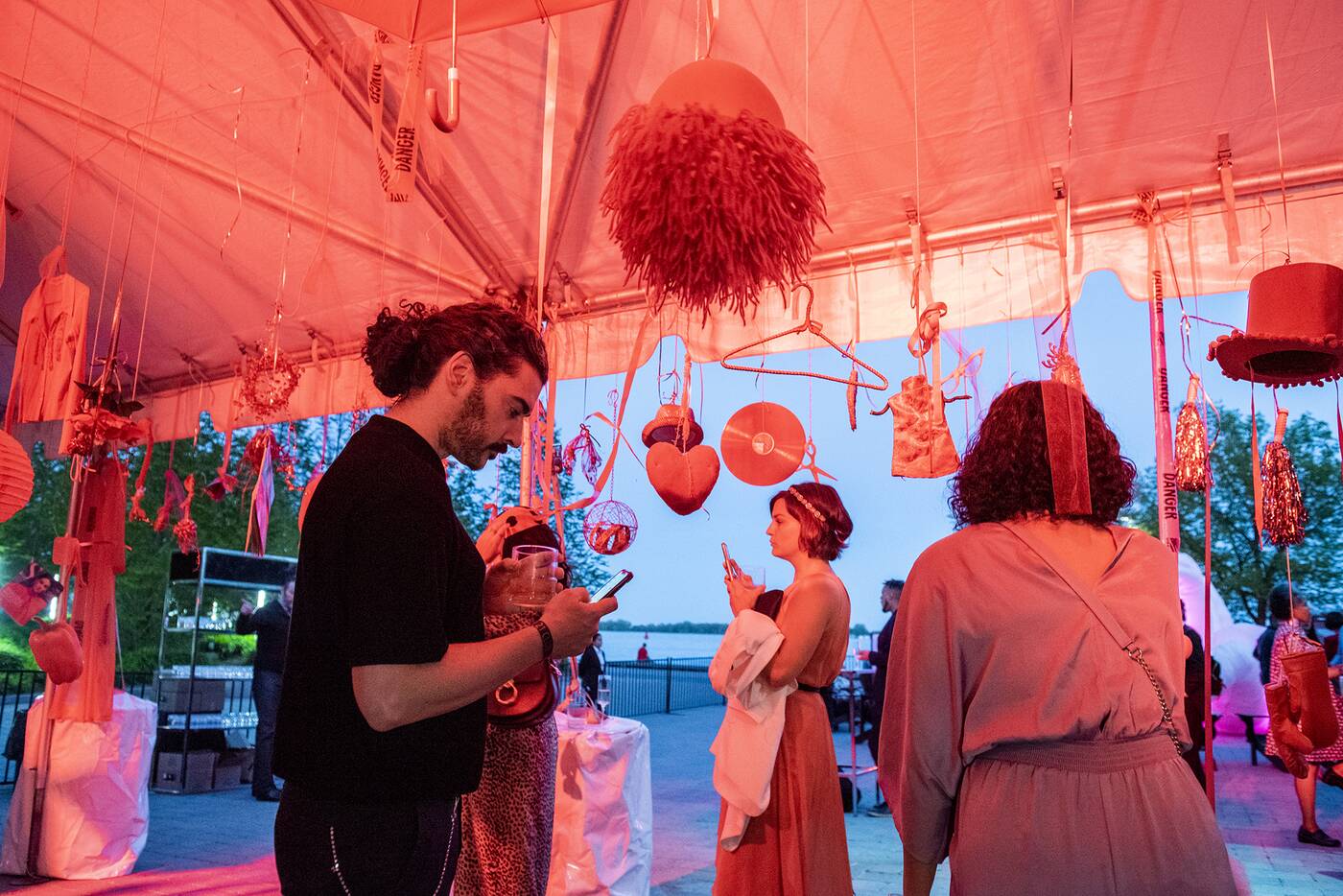 Regardless, everyone seemed to be having a great time, grooving to the music, sipping on Prosecco, and handing me oyster shells. 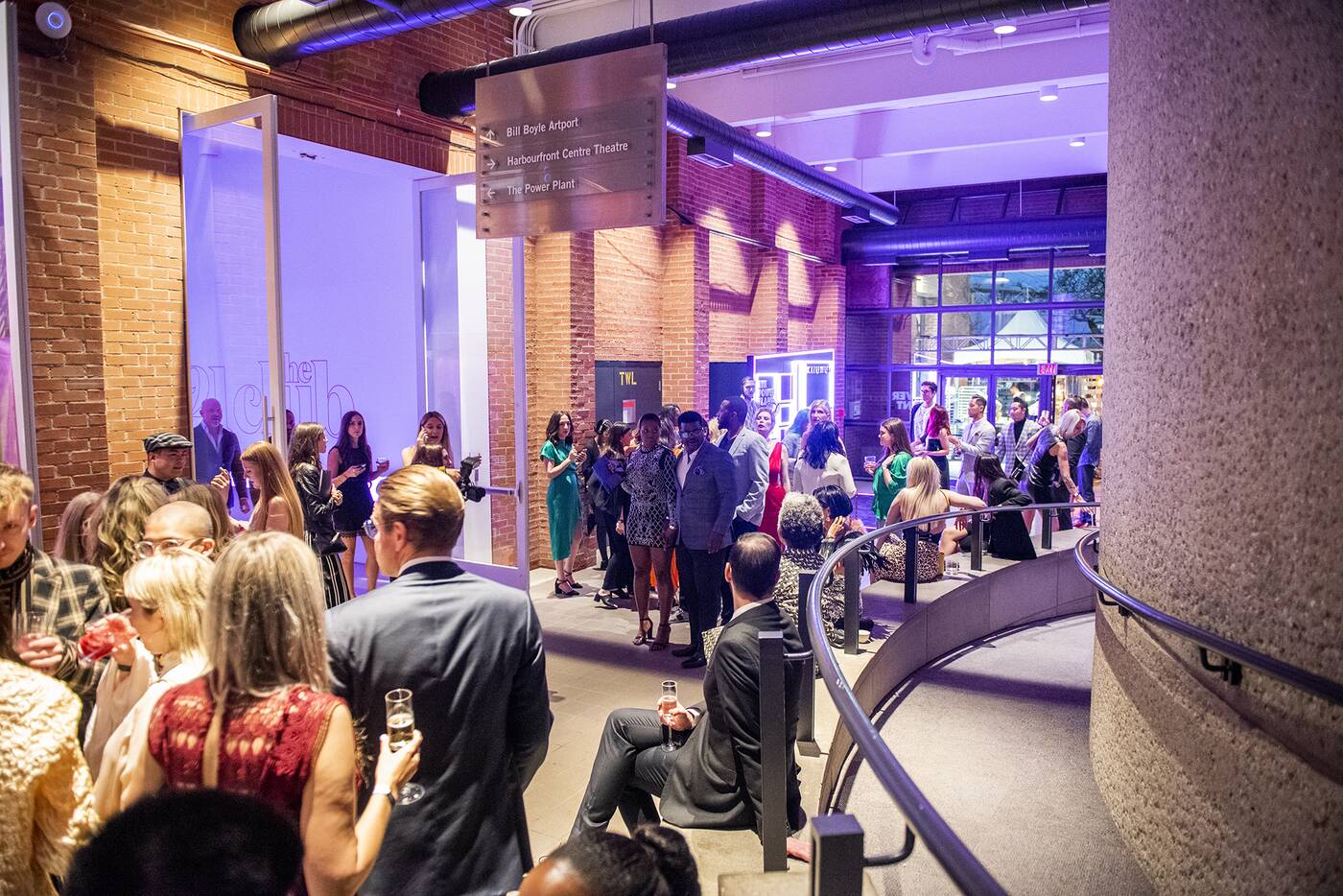 Art may not be the same experience of everyone, but it's certainly true that art makes you happier. 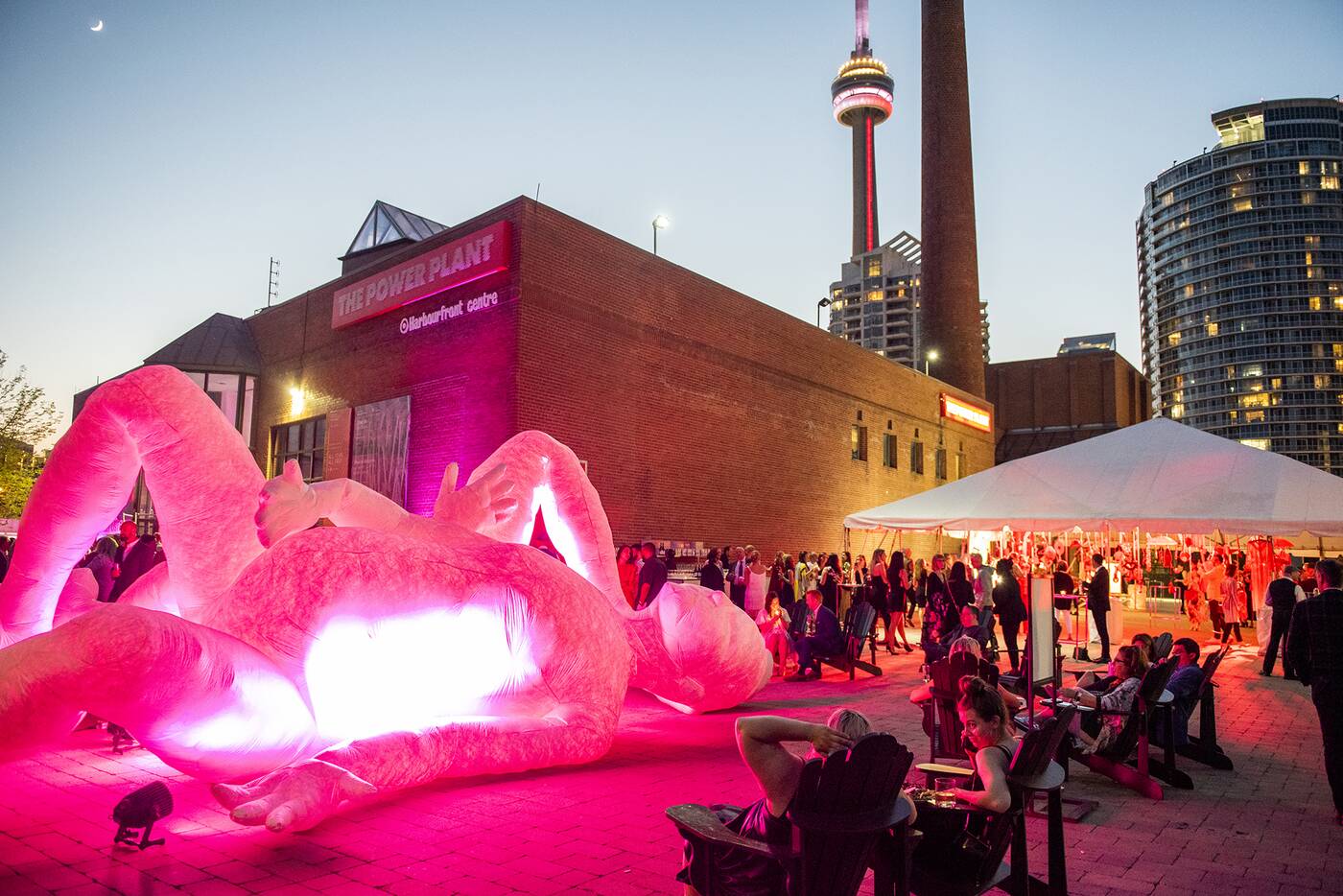