Spirit of York is currently open but their offerings and services may be affected due to the pandemic. Please contact the business directly for more information about any changes. Is this your business? Please contact us if you would like to update this message.

Spirit of York is meant to be a world class distillery for a world class city like Toronto. Vodka and gin made with ingredients found here in Ontario, most notably our spring water, are just the beginning of offerings from this fledgling distillery.

This place is bringing distilling back to the Distillery District. A while ago this used to be a space for Gooderham and Worts, but since then the only other spirit-making operation in this part of town has been the Ontario Spring Water Sake Company. 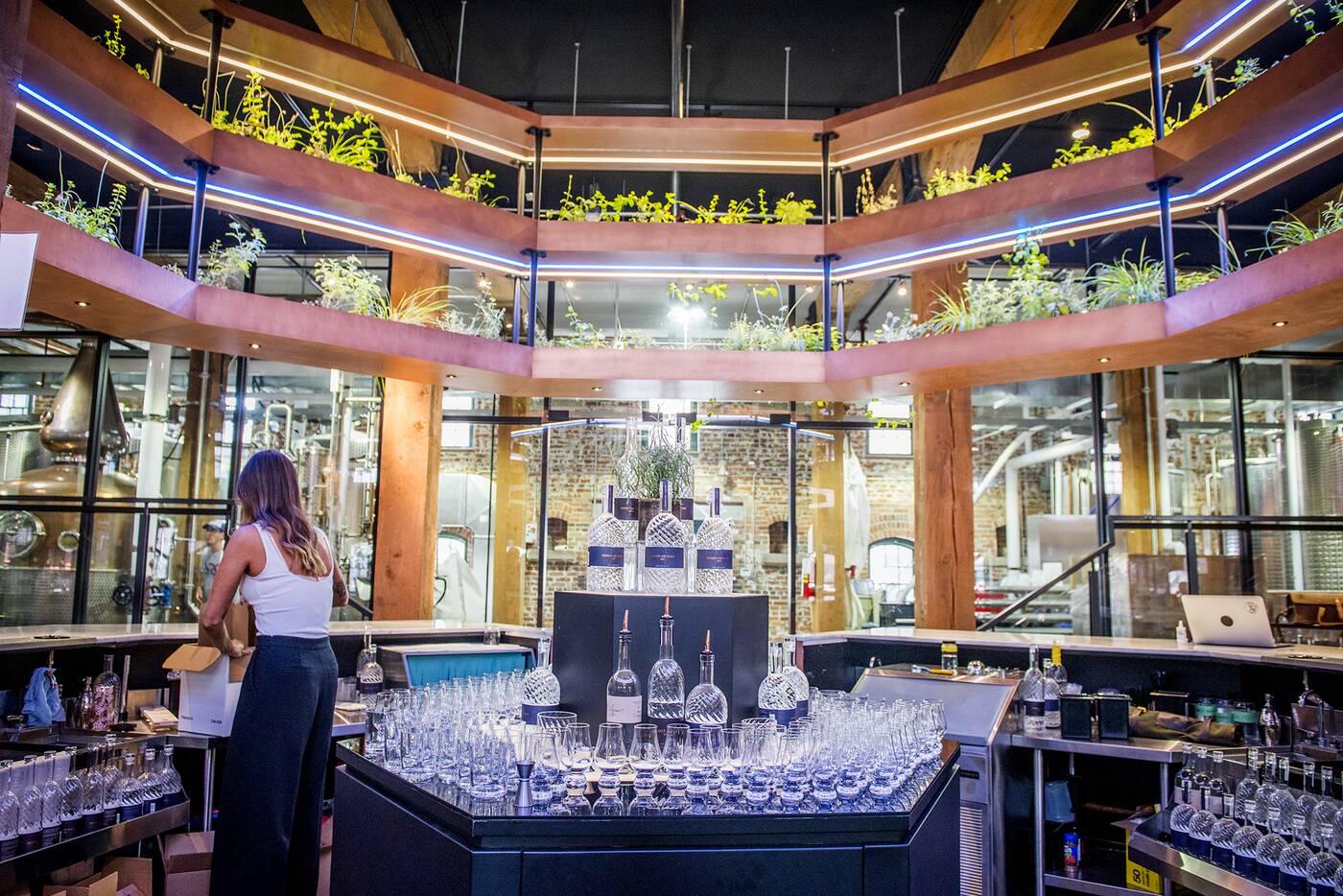 The space was designed in part by +tongtong, powerhouse designers for multiple Drake locations, Batch, Torteria San Cosme, and many other outstanding-looking spots. This distillery is no different. 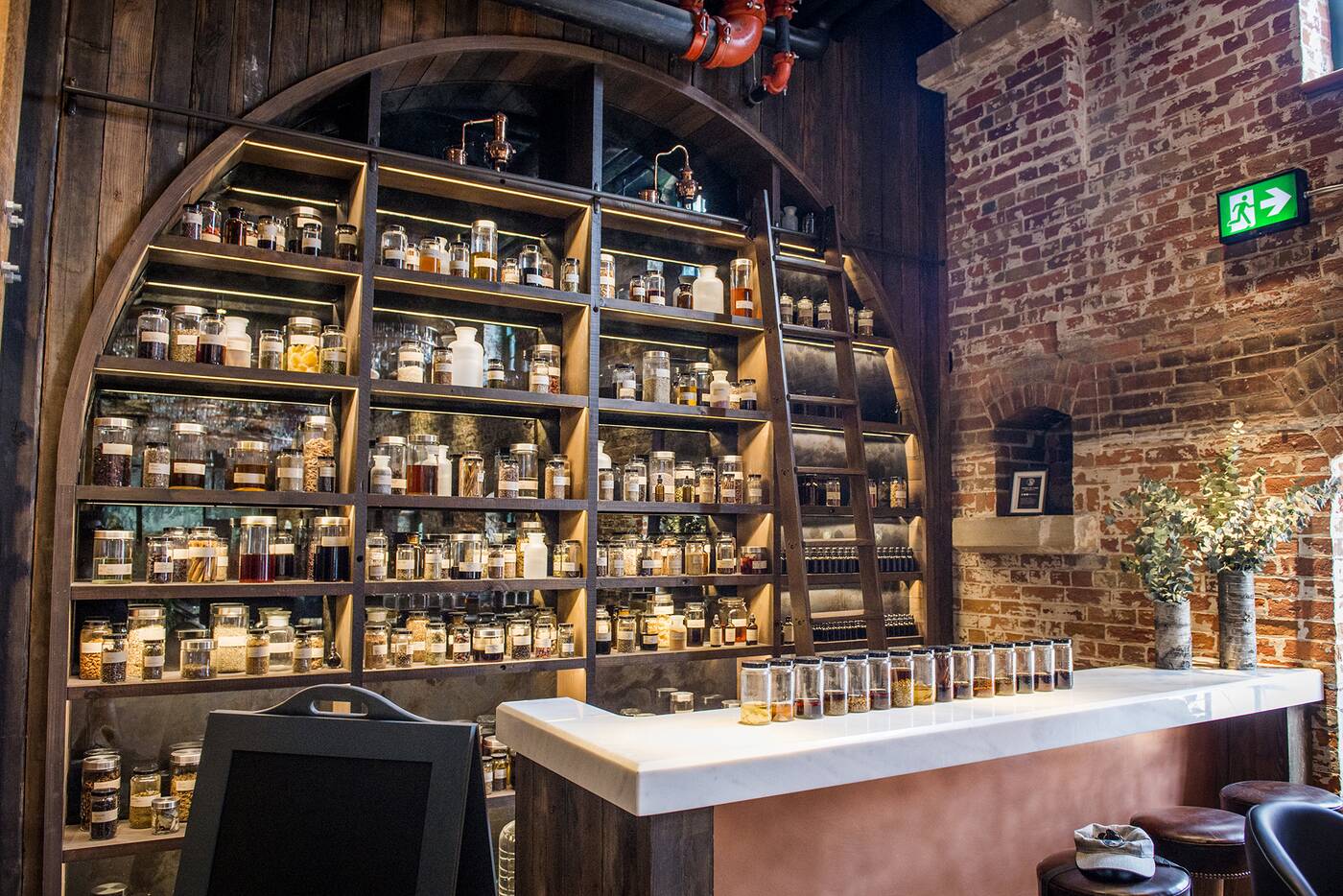 The glimmering open space centres on a stunning circular bar under a hovering live wall of herbs that will be used in future cocktails. 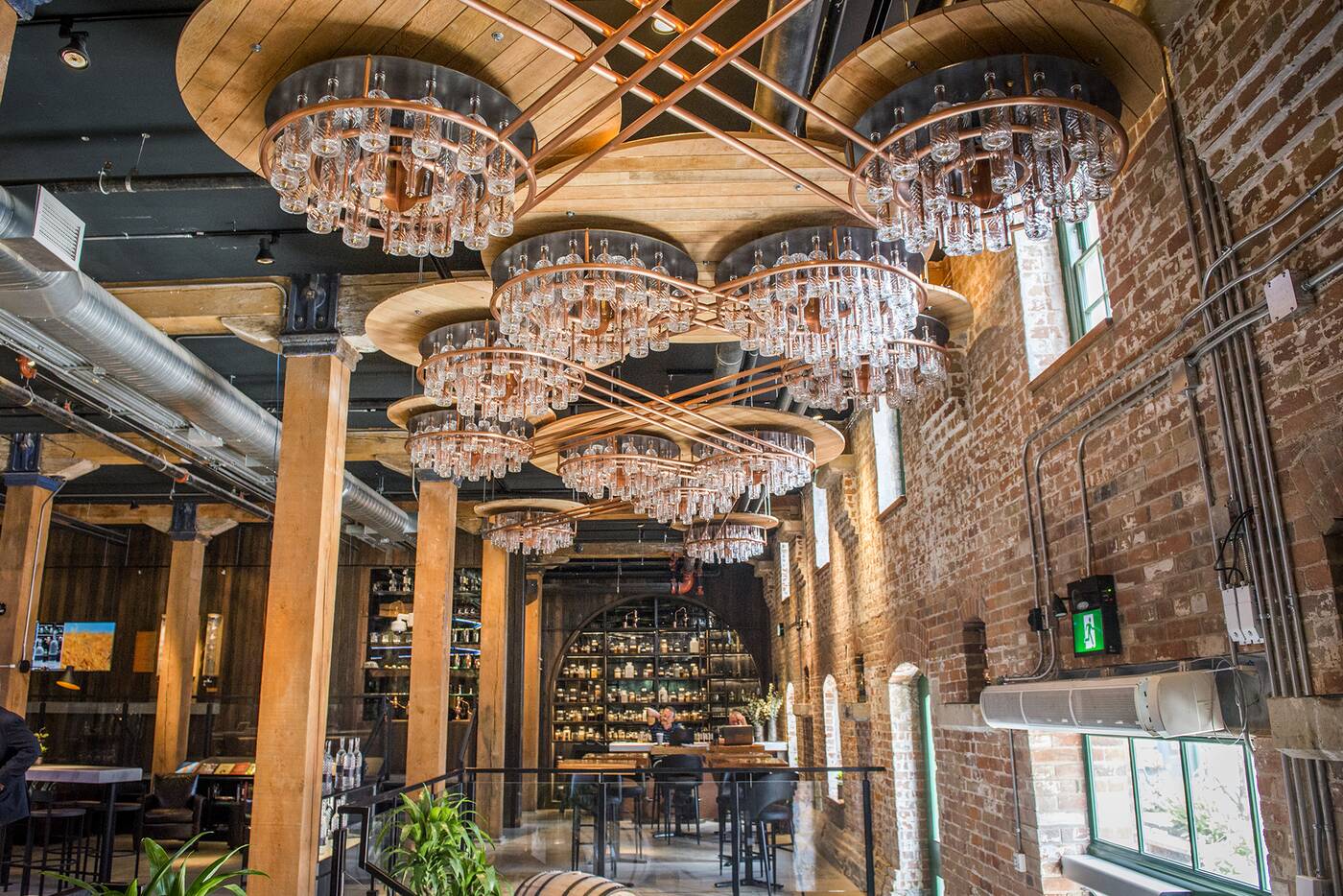 Especially eye-catching are the chandeliers hanging above the entrance, made of Spirit of York’s custom bottles and incorporating their winding, art-deco-esque logo, which bends the letters S, O and Y into each other. 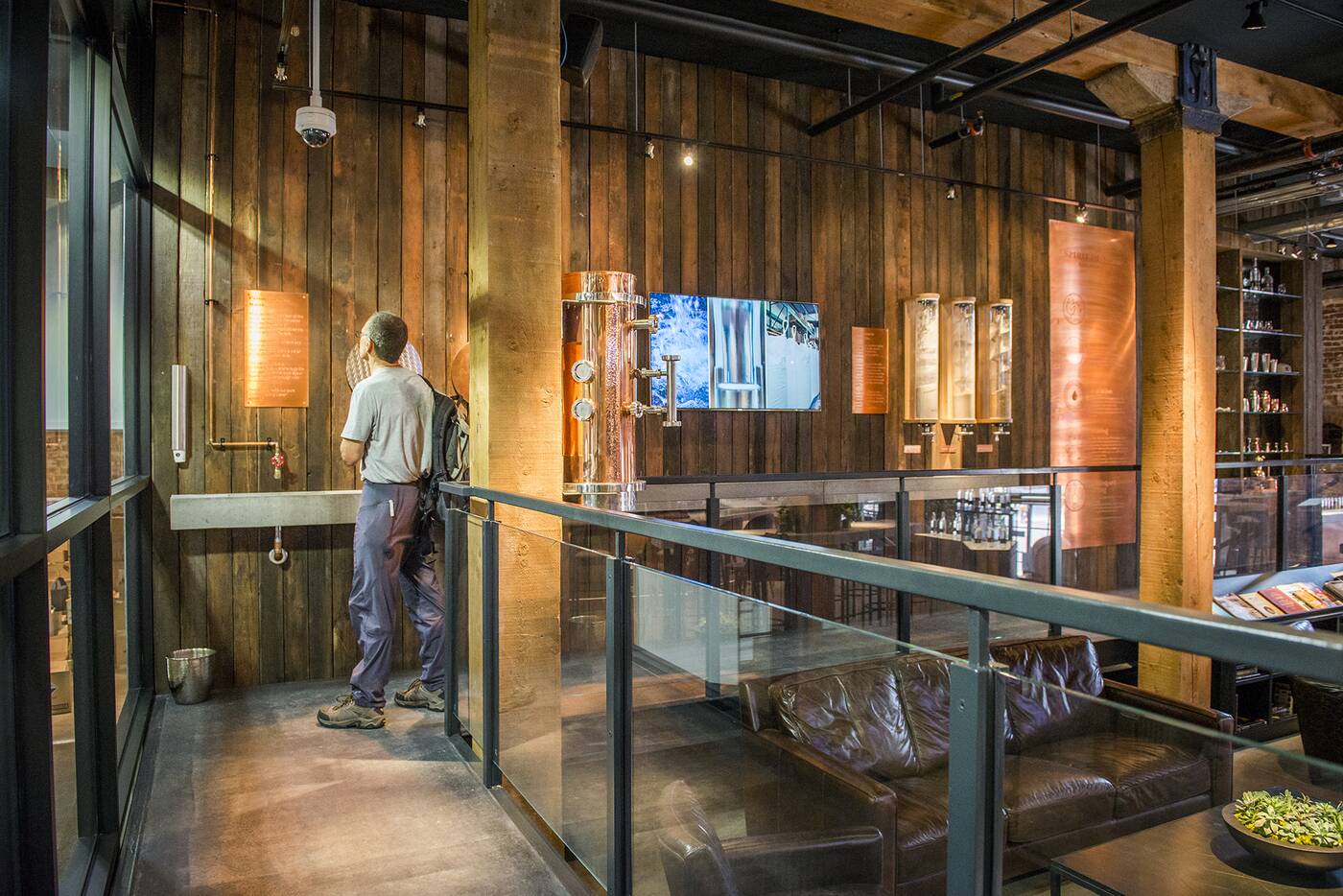 The idea here is that you are guided or guide yourself through a tour of the place, easy enough with copper info plates on the walls. Start with a look at 100% Southern Ontario rye grain, take an up-close look at part of the towers outside, and read about spring water and distilling vessels. 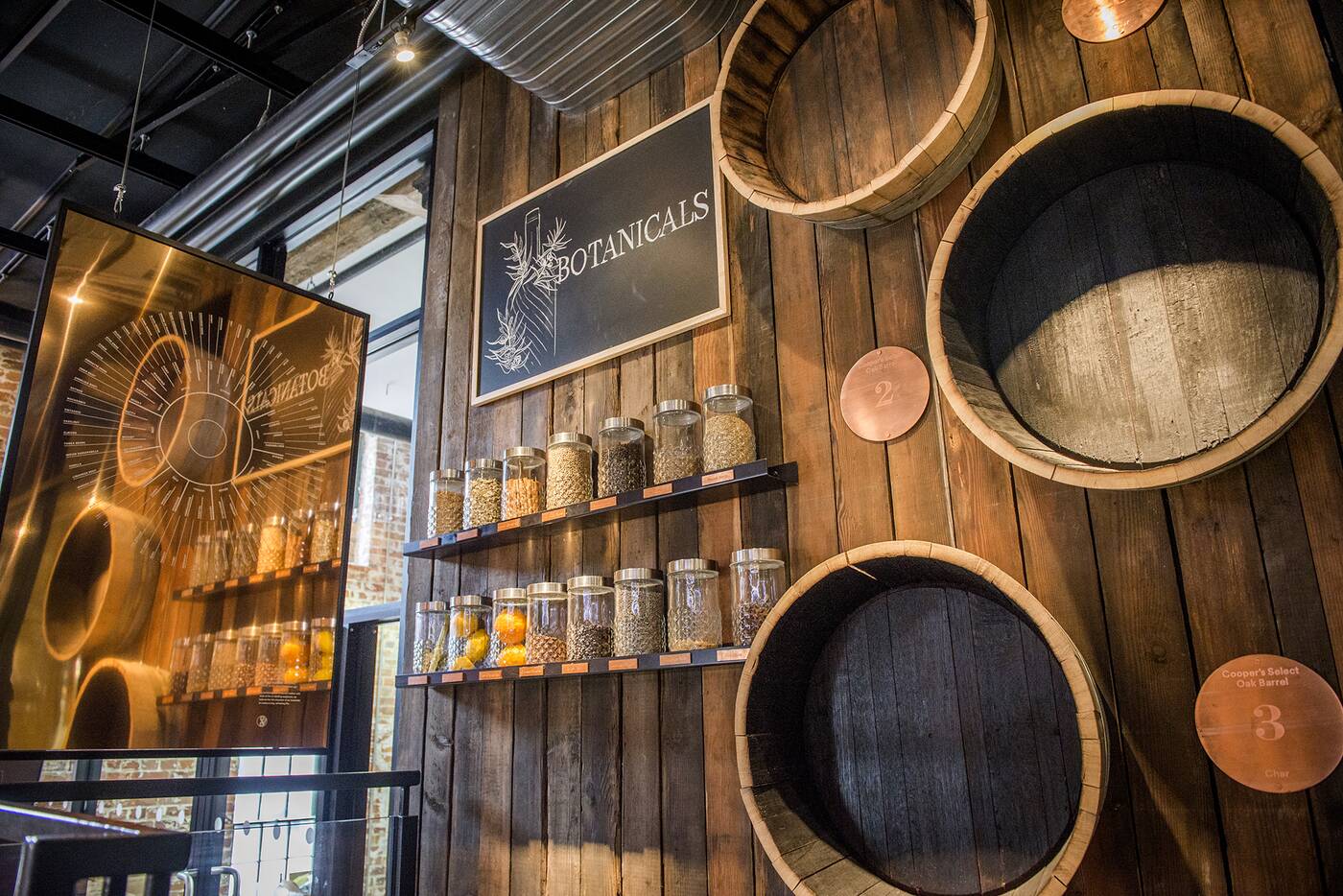 From there, check out the fifteen botanicals that are key to transforming their vodka into their gin, including aromatic cinnamon, dill, star anise, juniper and Cubeb pepper. 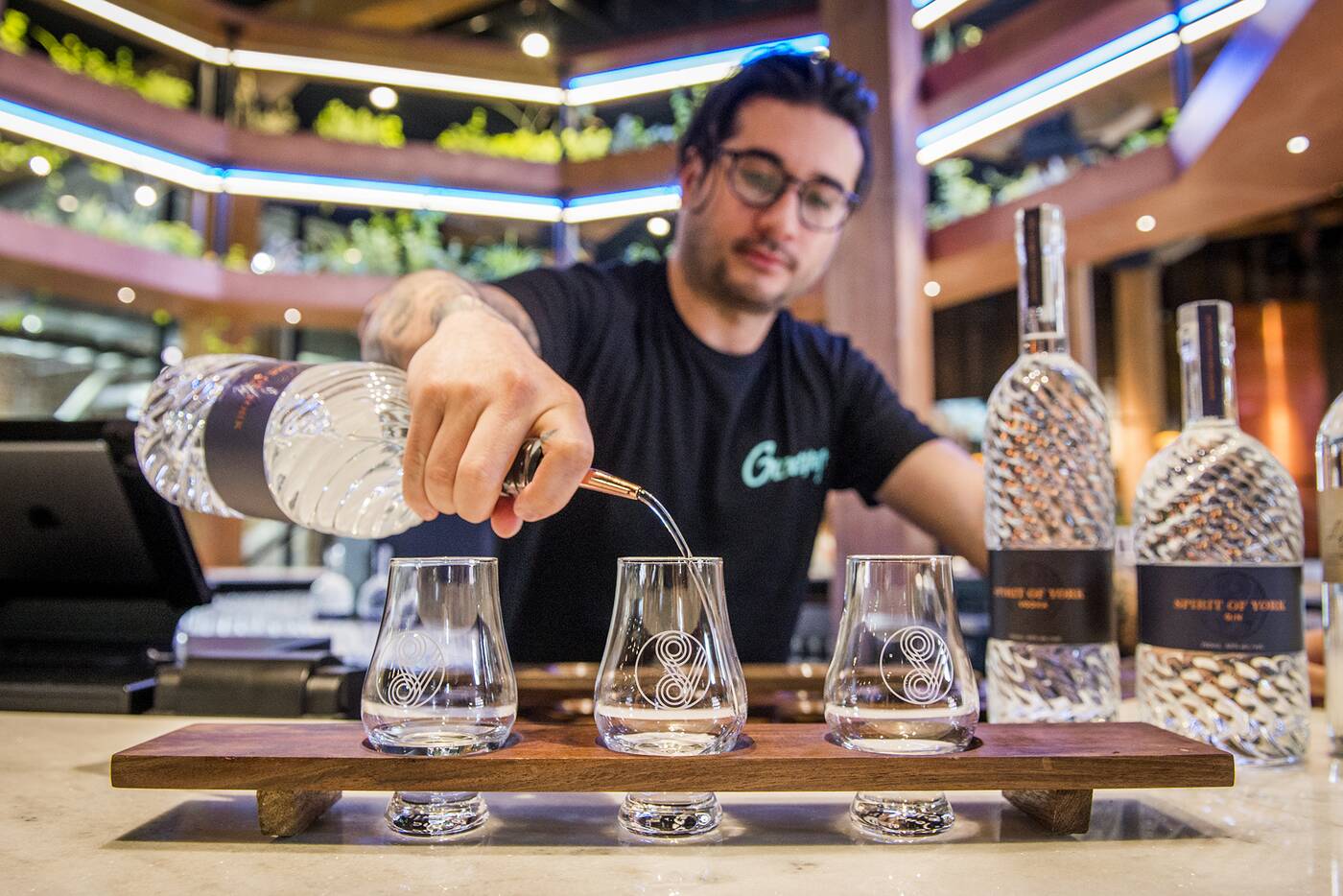 After you’ve seen how it’s all made, sample a flight ($10) of vodka, gin, and a third rotating experimental spirit, which on the day of my visit was a licorice-y, warm aquavit. This vodka is nothing like your average Smirnoff, smoother and richer in flavour. The botanicals enriching the gin, which started out as vodka, bring out even more complexity. 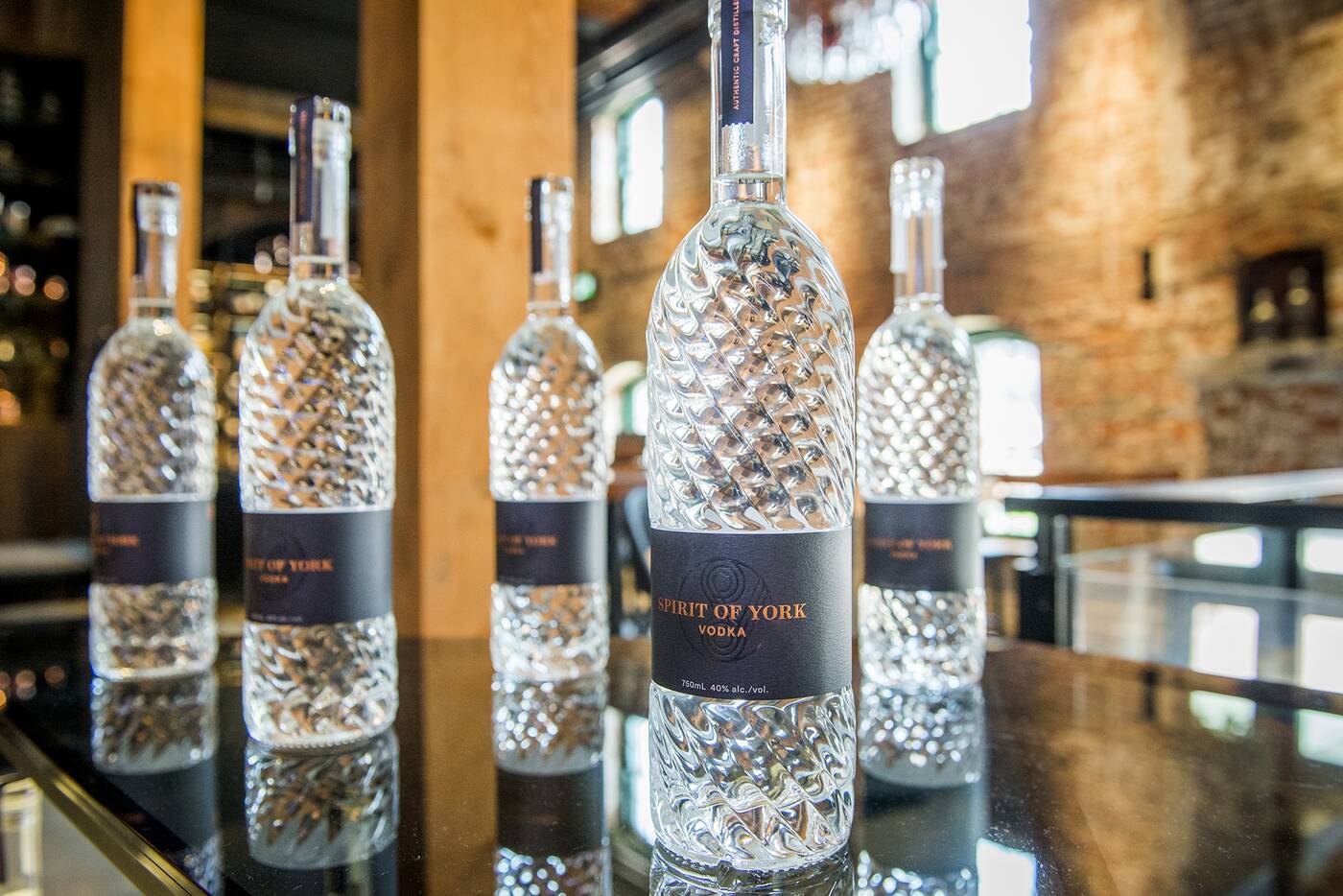 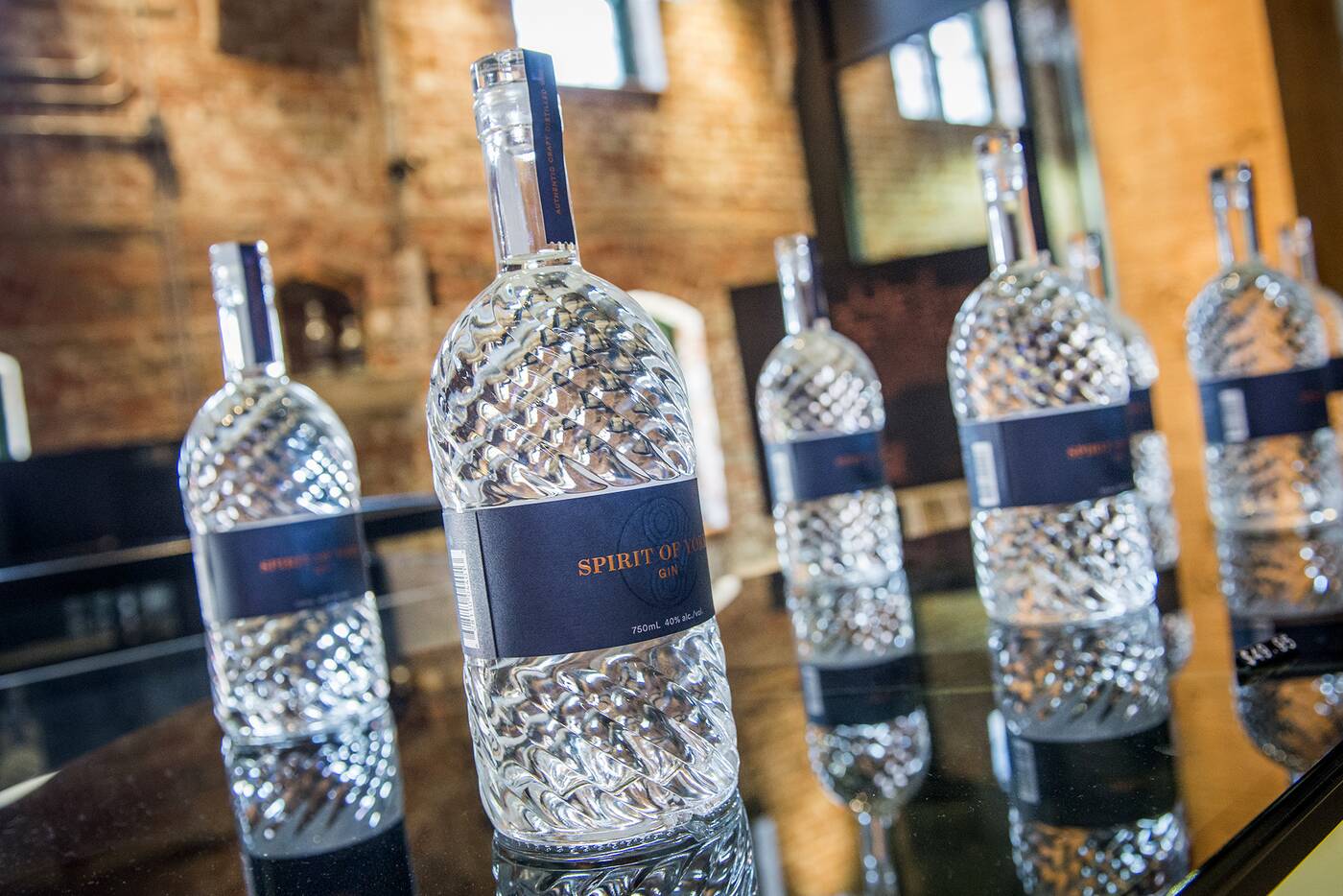 Though not for the first months of operation, you should be able to find these homegrown spirits at the LCBO, too. 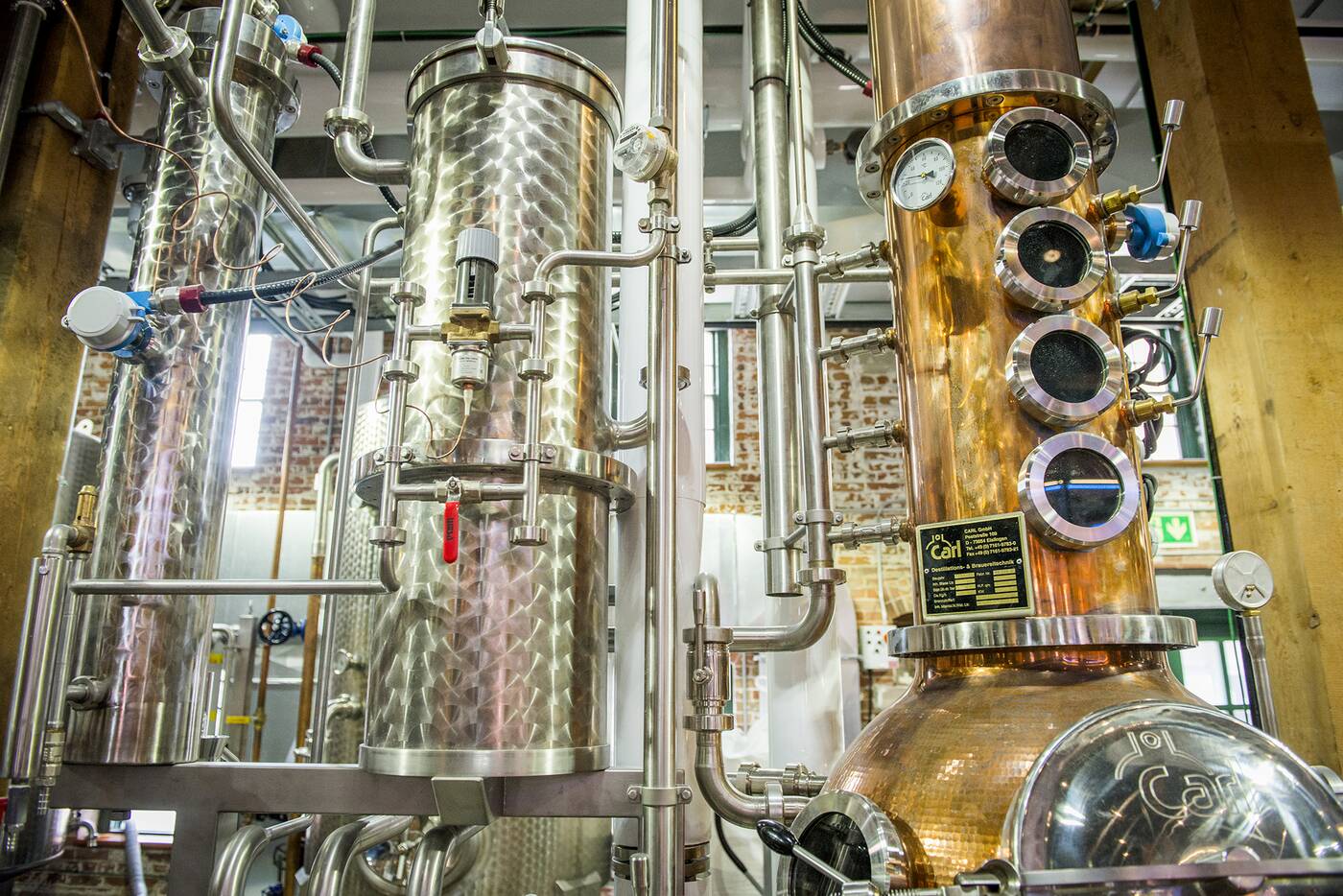 Though what goes into the booze is powerfully Ontarian, the equipment that creates was made by fifth generation coppersmiths Carl. 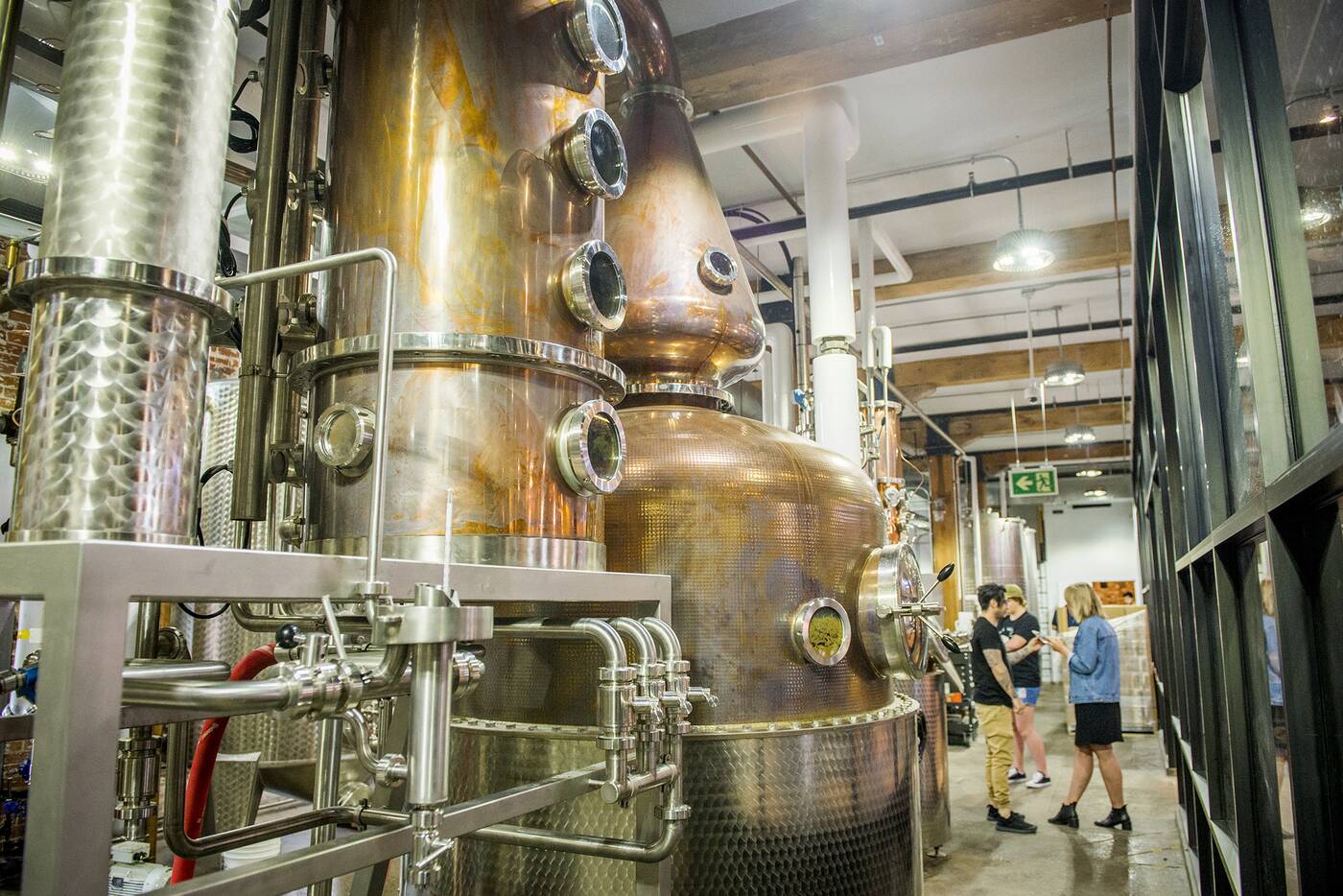 Heavy gauge copper allows for heat conduction, even distillation, temperature control and pulls foul-tasting sulphurs out of the spirit. 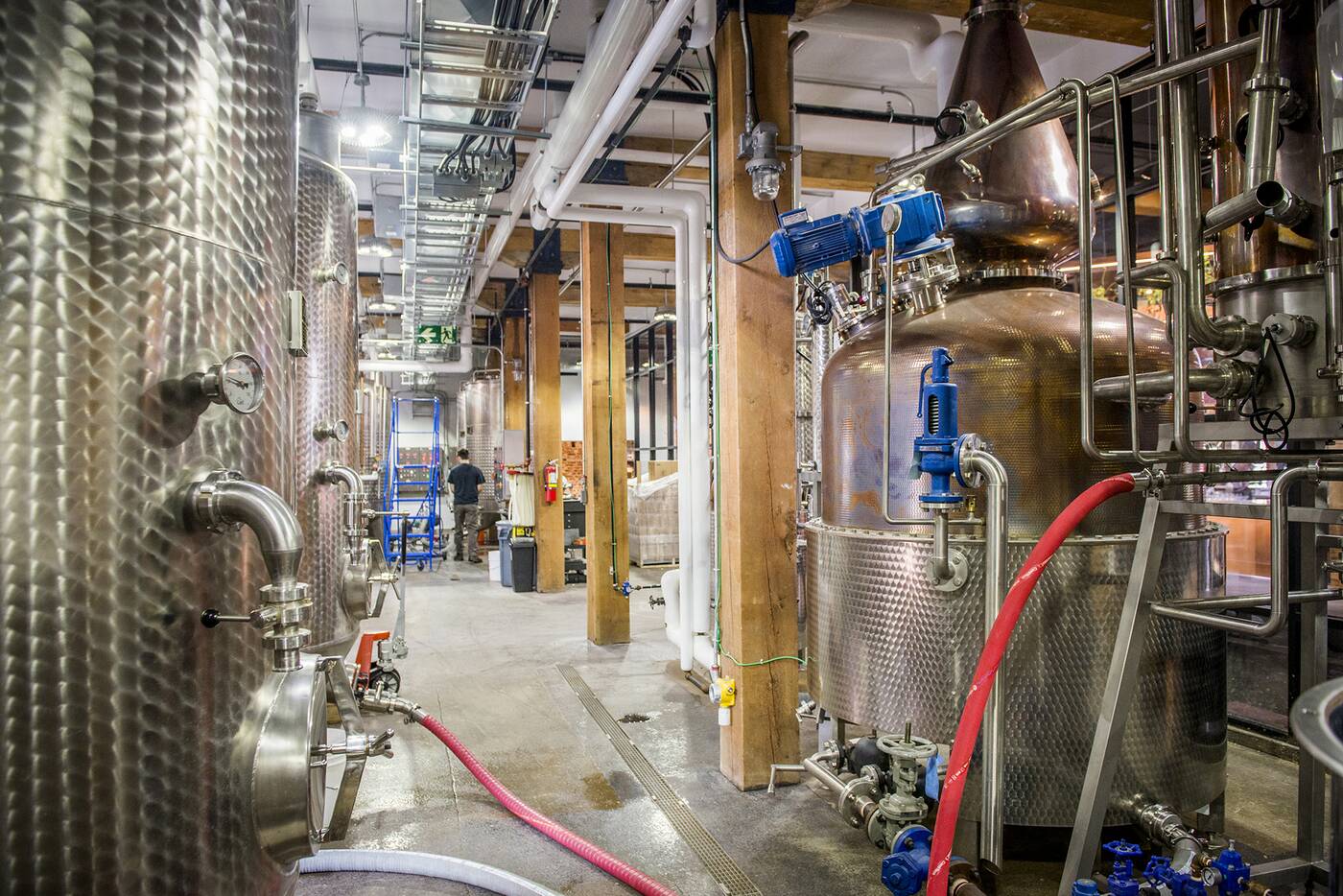 These spirits are so smooth because they’re made from only the purest “soft hearts” of the liquid rather than “heads” or “tails,” and aerating for at least three weeks. 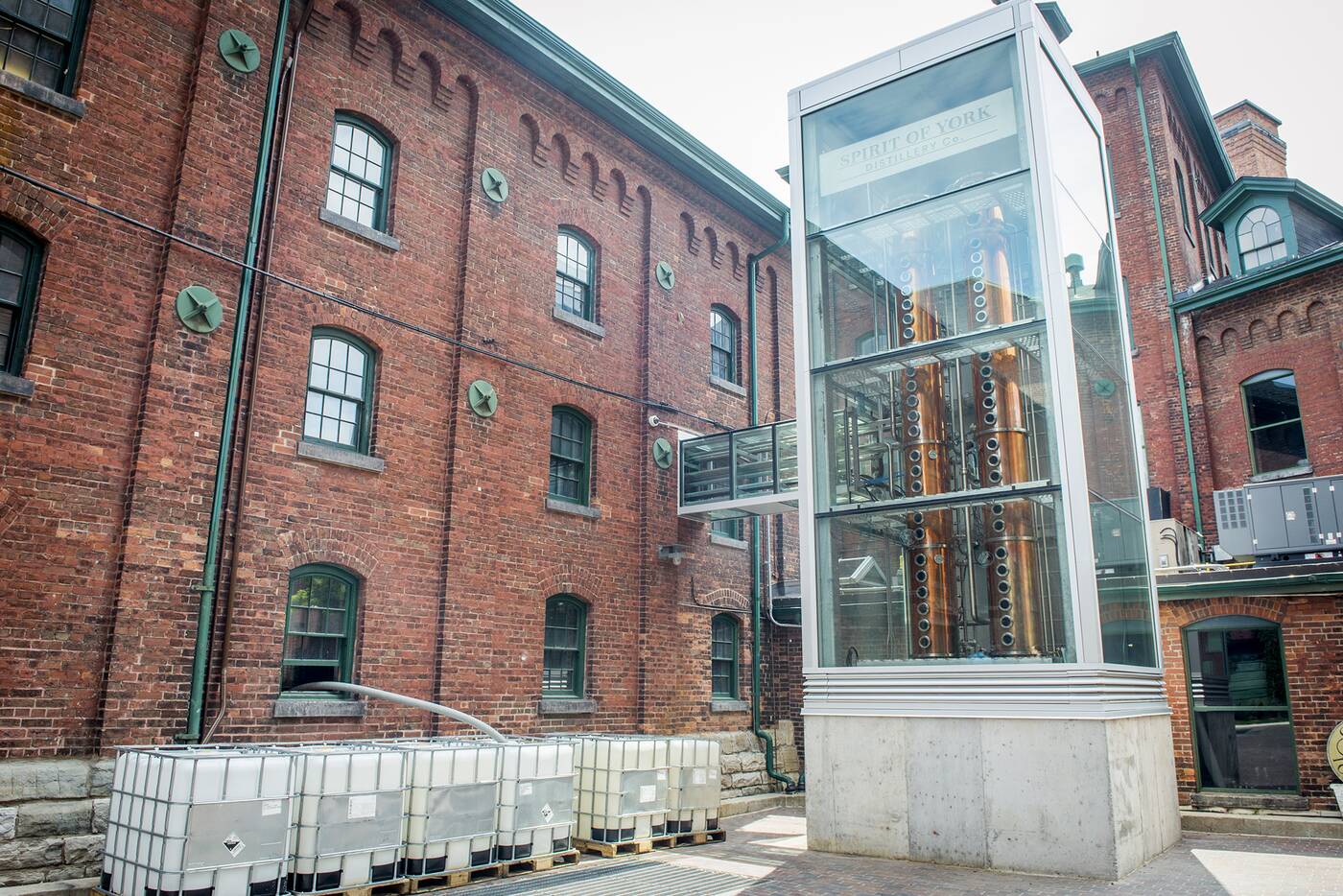 It’s also because the liquid is distilled just once using impressive distillation towers out back. 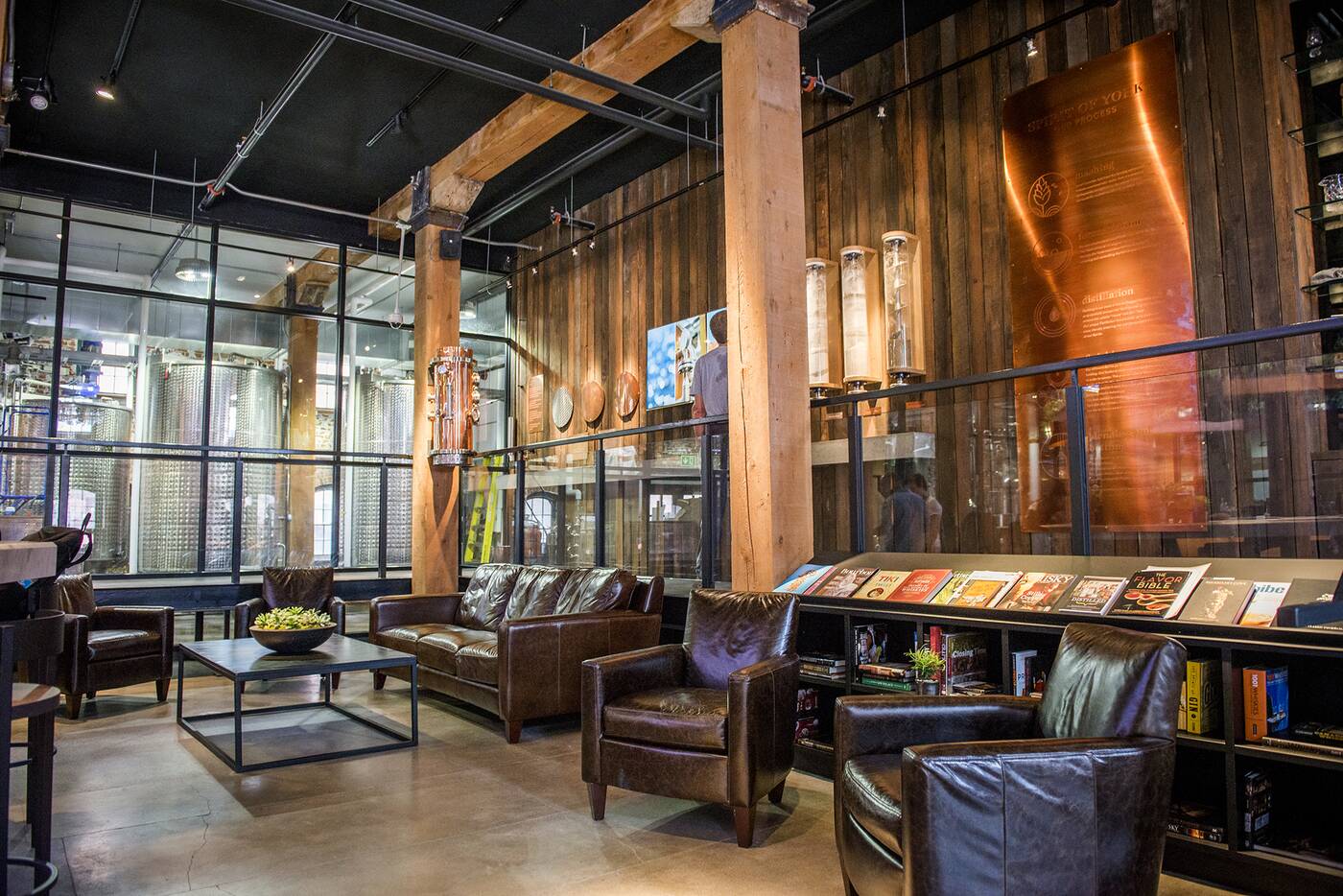 Why not support local spirit making if it tastes this good? You also just might learn something about what you’re drinking. 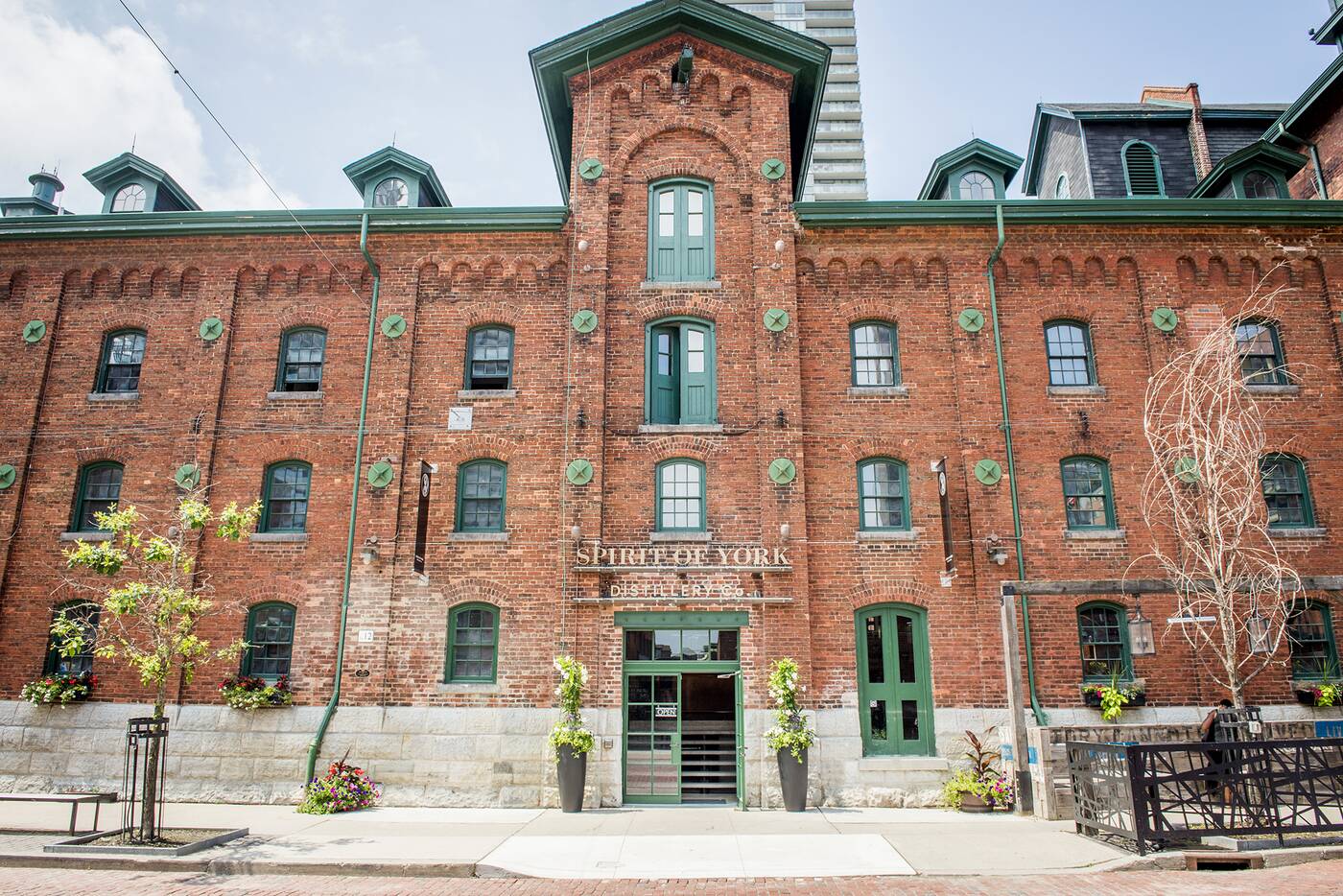