The Moon just landed in Toronto

It may not have its own gravitational force, nor does it light it up the night sky, but the new giant moon at the Aga Khan Museum is likely the closest we'll get to the glowing orb that has mystified mankind for millennia.

The Moon: A Voyage Through Time is this year's principal temporary exhibit at the Aga Khan Museum, created to coincide with the 50th anniversary of Apollo 11’s lunar landing. 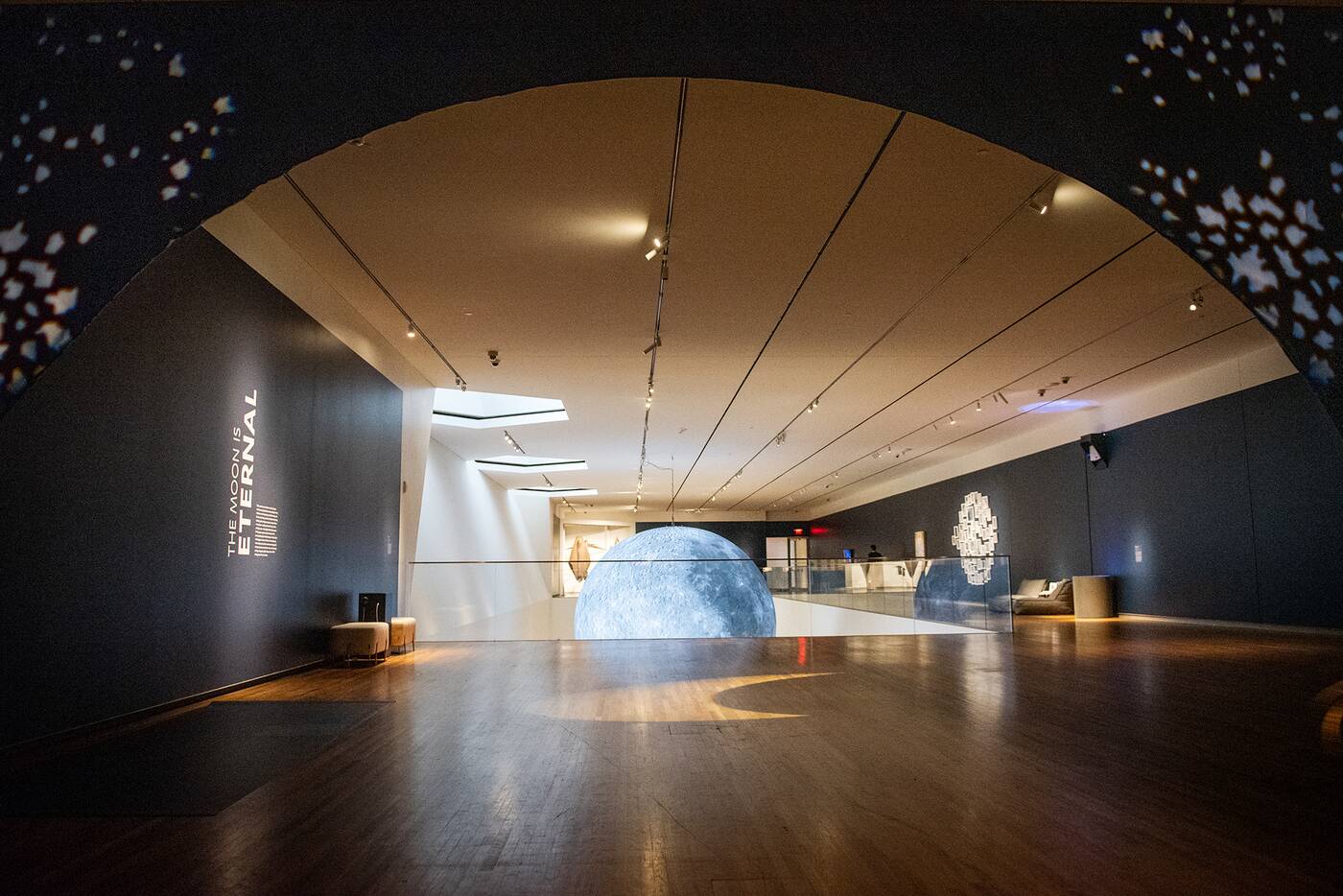 Rather than taking the tired "man on the moon" approach, Toronto's museum dedicated to Islamic arts eschews Neil Armstrong to instead focus on our wistful relationship with this orbital rock via an incredible sculpture by British artist Luke Jerram, simply titled Moon. 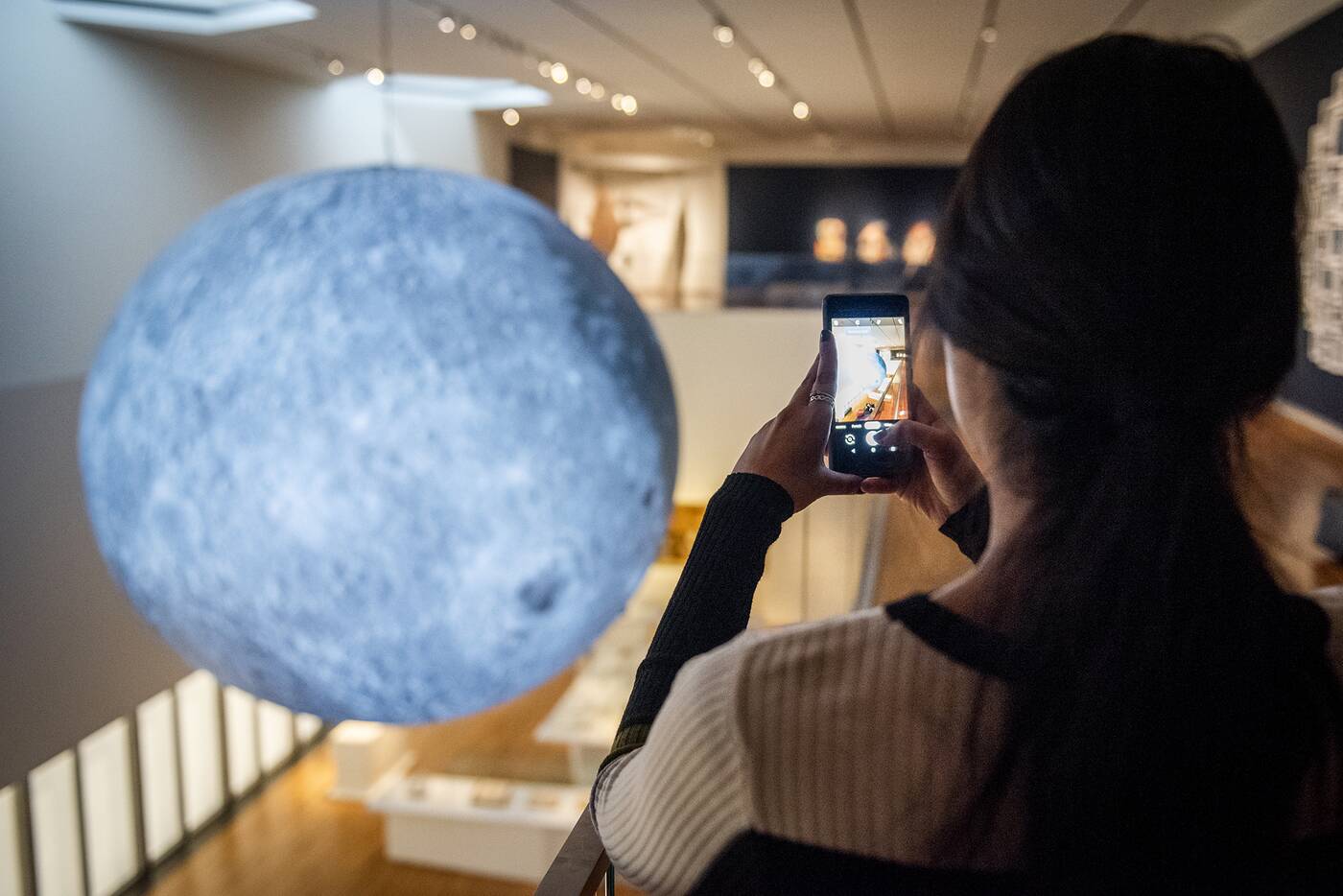 Made from nylon, this ethereal mass hangs from the ceiling of the Aga Khan's two-storey gallery, suspended over the first floor's permanent exhibit. 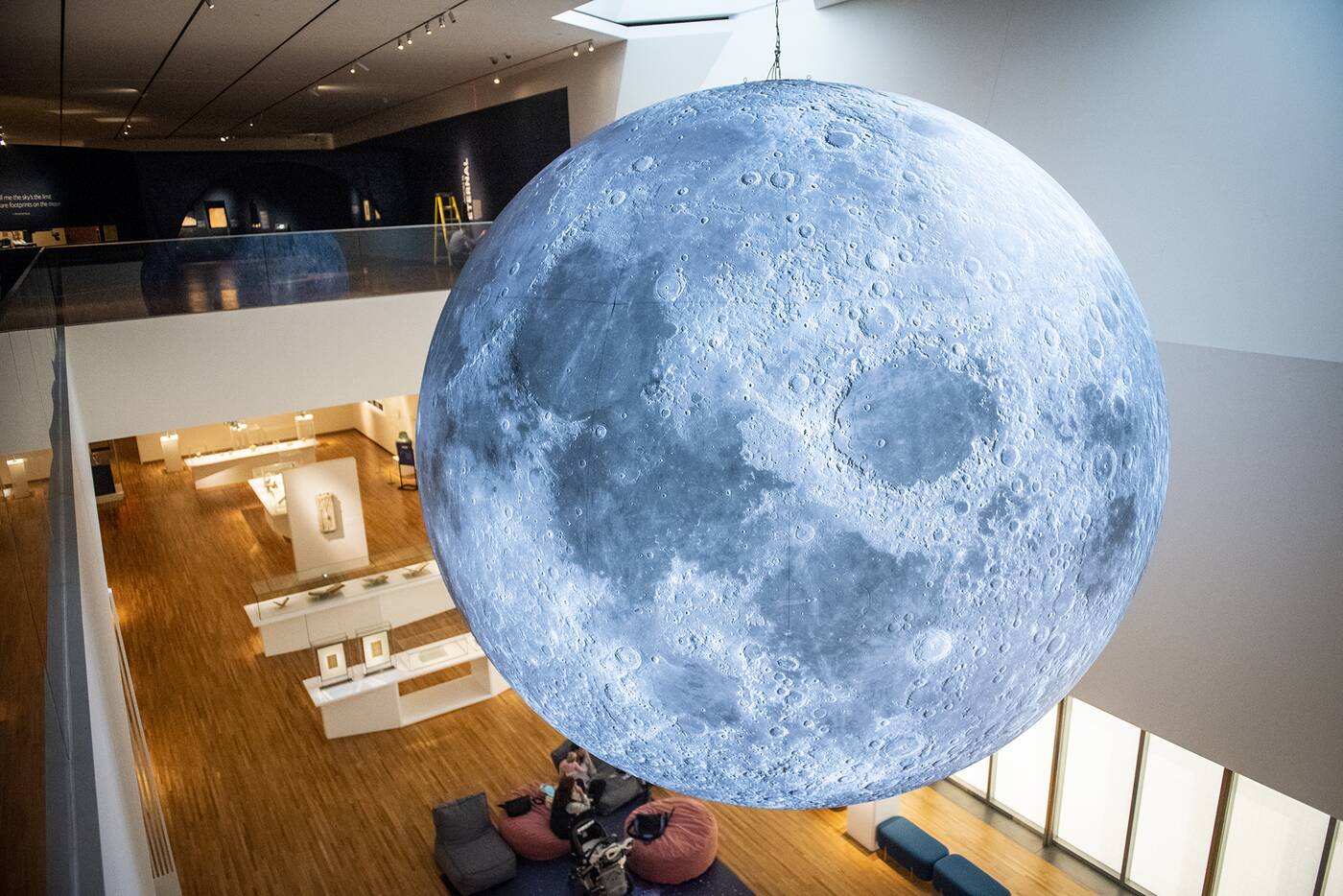 There are seven of Jerram's lunar installations, each measuring seven metres in diameter, but this isn't one of them. 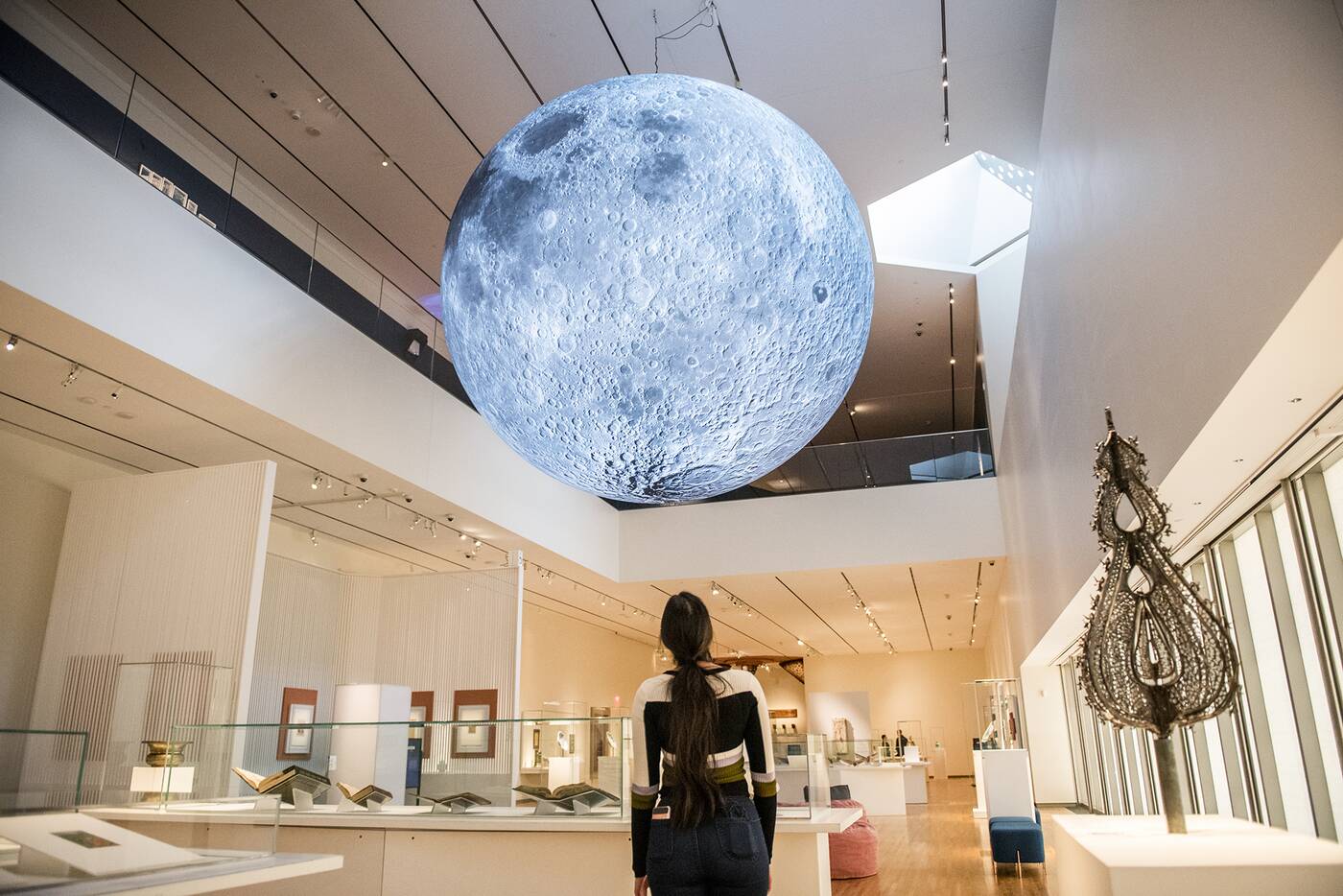 Toronto's moon is a smaller version with a five-meter diameter, created specially by Jerram for this five-month-long exhibit. 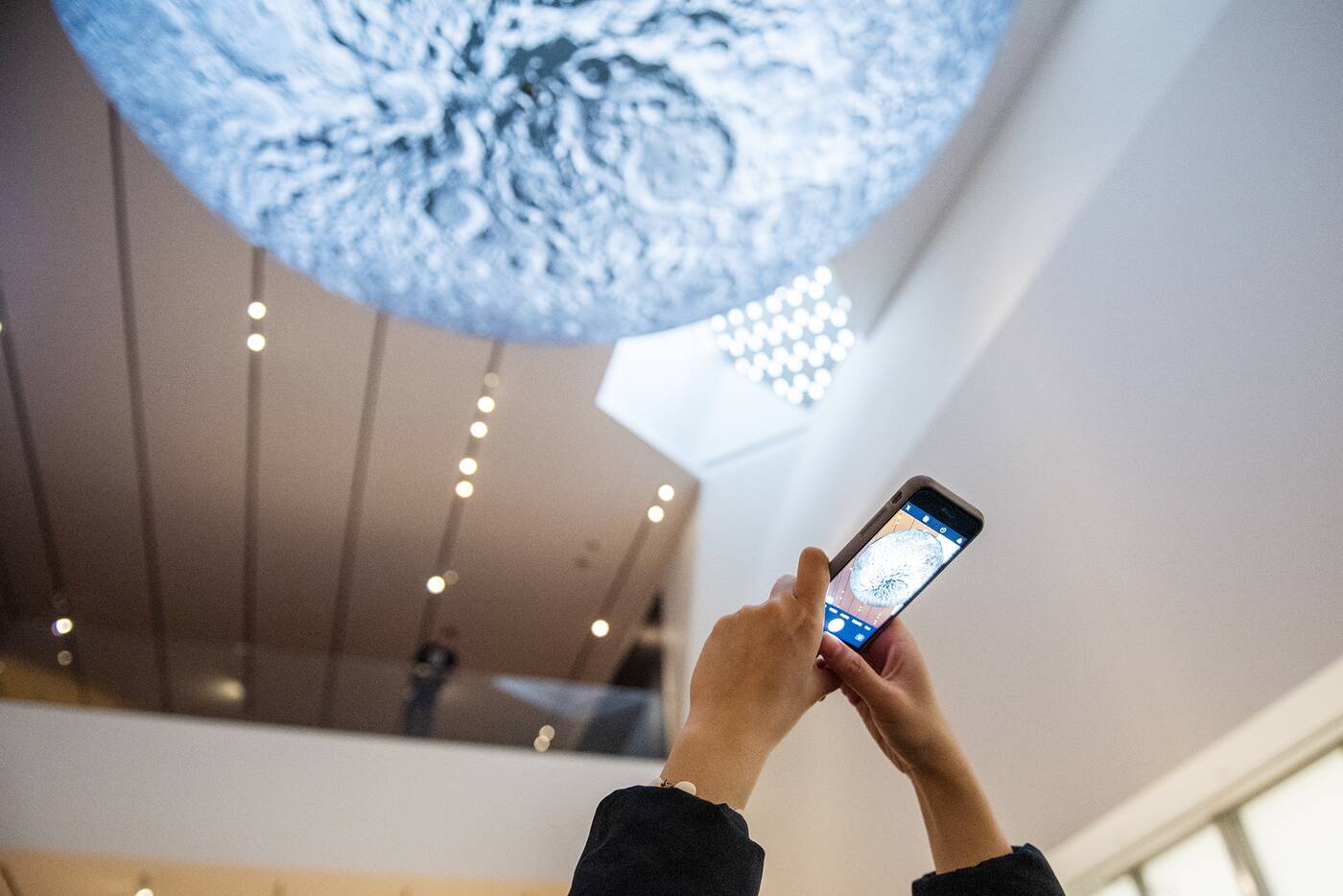 Lit by a single bulb within, the exterior of Moon is digitally printed with detailed imagery from NASA. Stitched together, the photos create a perfect to-scale view of the astronomical body orbiting our planet. 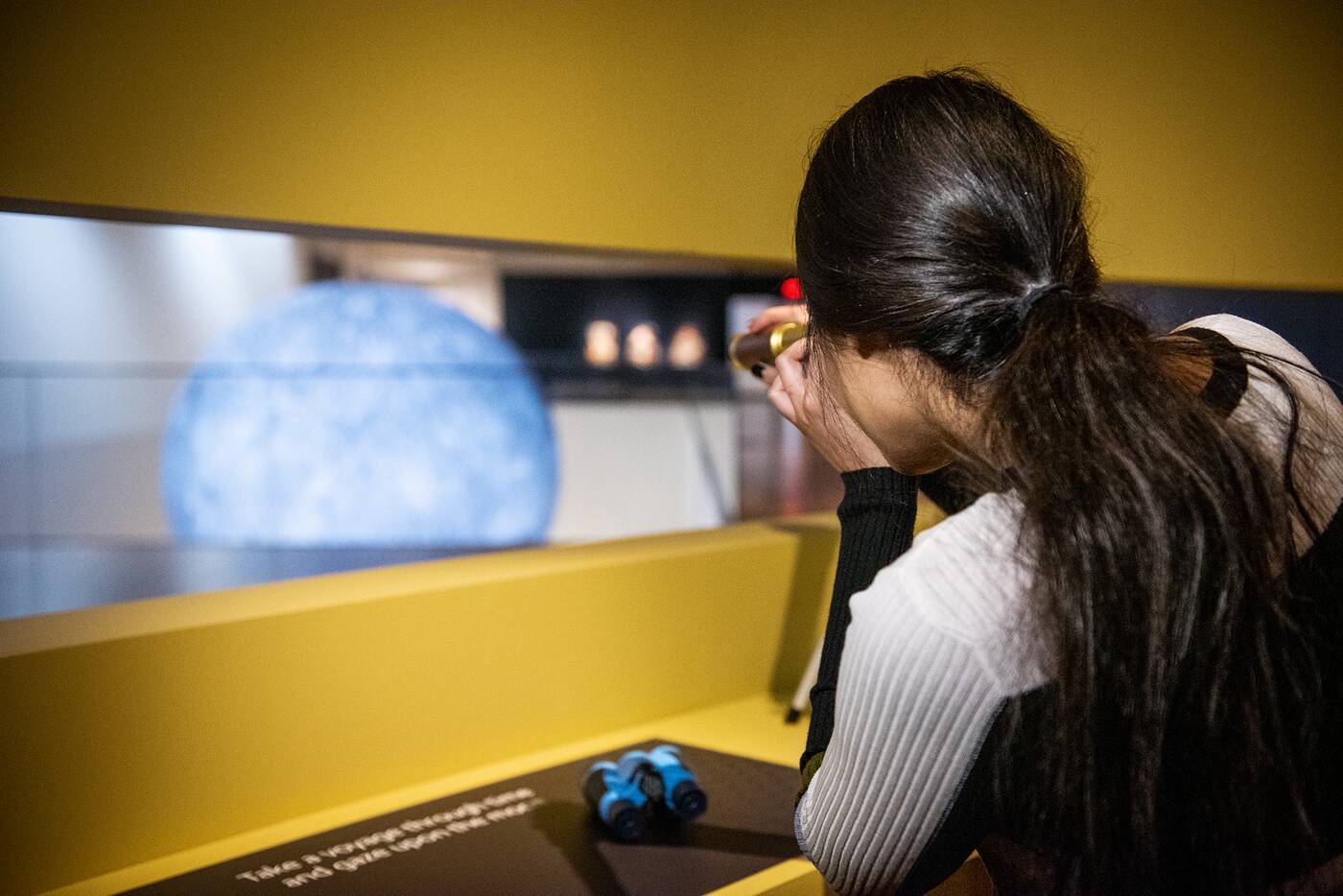 You can view Moon several ways from the second-floor exhibit, including over the rail, or through a few types of navigator telescopes in the designated exploratory section. 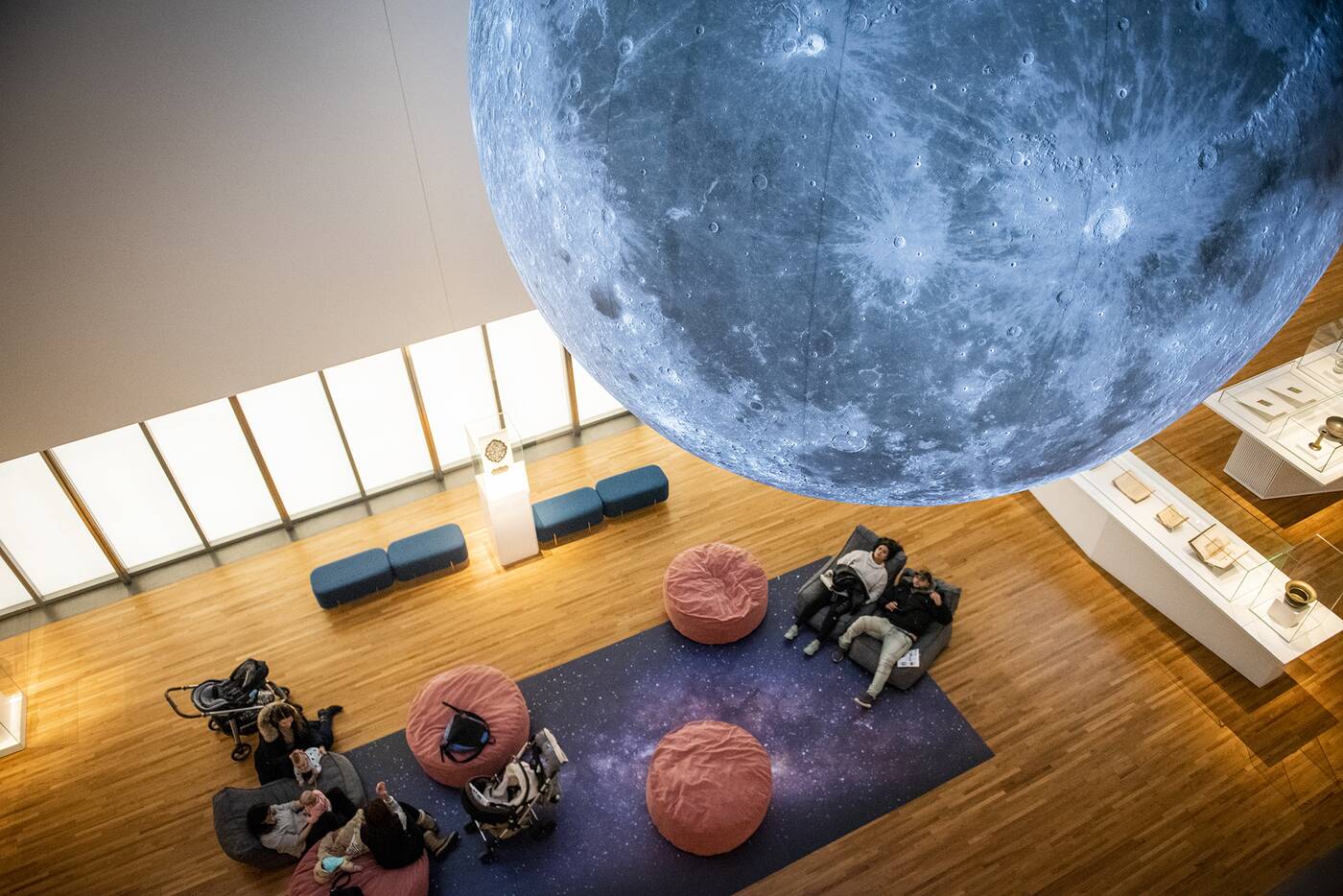 A more familiar approach to star-gazing for most will be from the floor. Set atop a graphic of the Milky Way, ultra-comfortable lounge poufs afford a dreamy perspective upward from amidst the permanent collection. 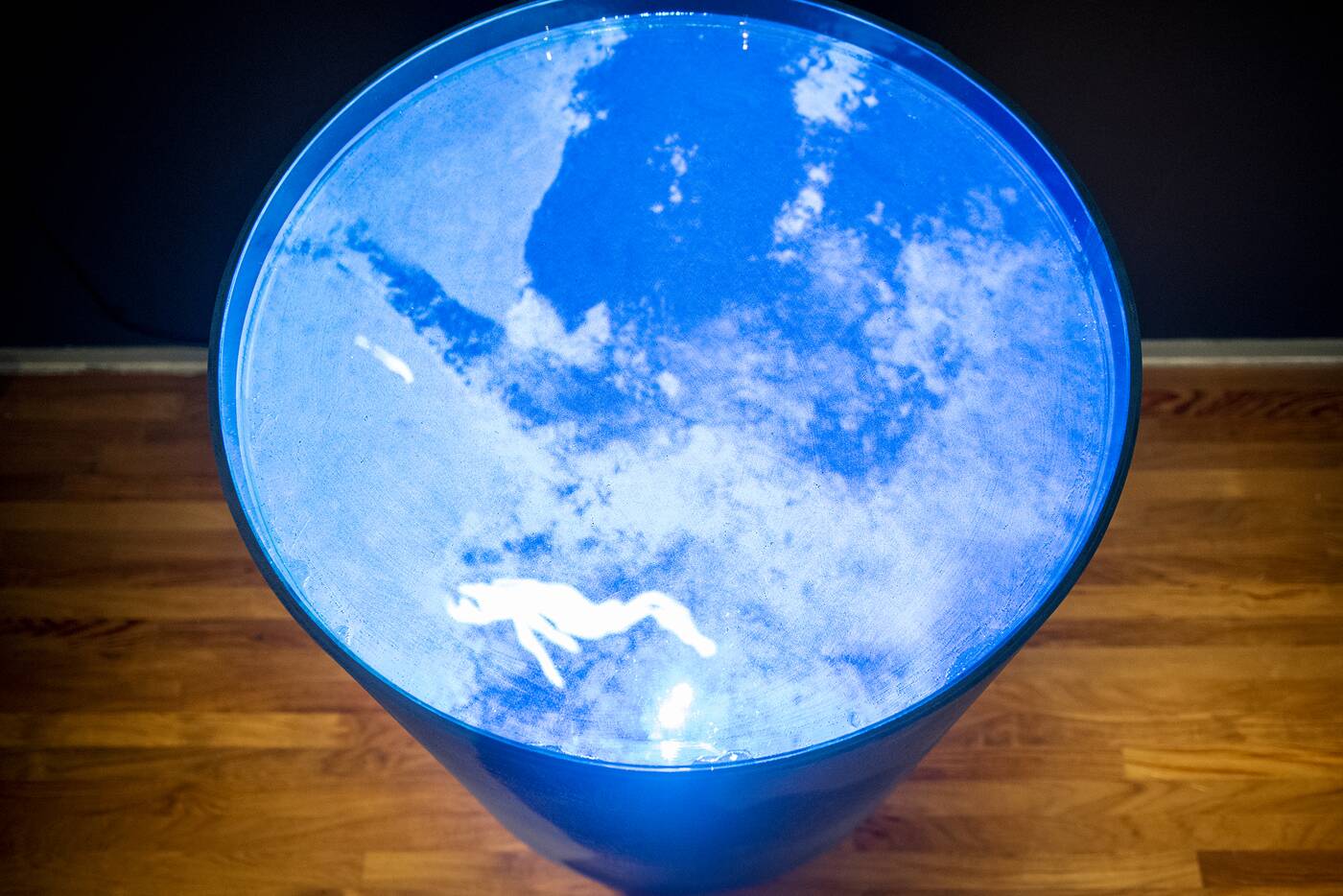 The subtle glow of Moon is undoubtedly the centrepiece of the space, but the exhibit as a whole delves into the moon's historical influence on mankind through the ages via poetry, science, art, or religion through interactive devices and displays. 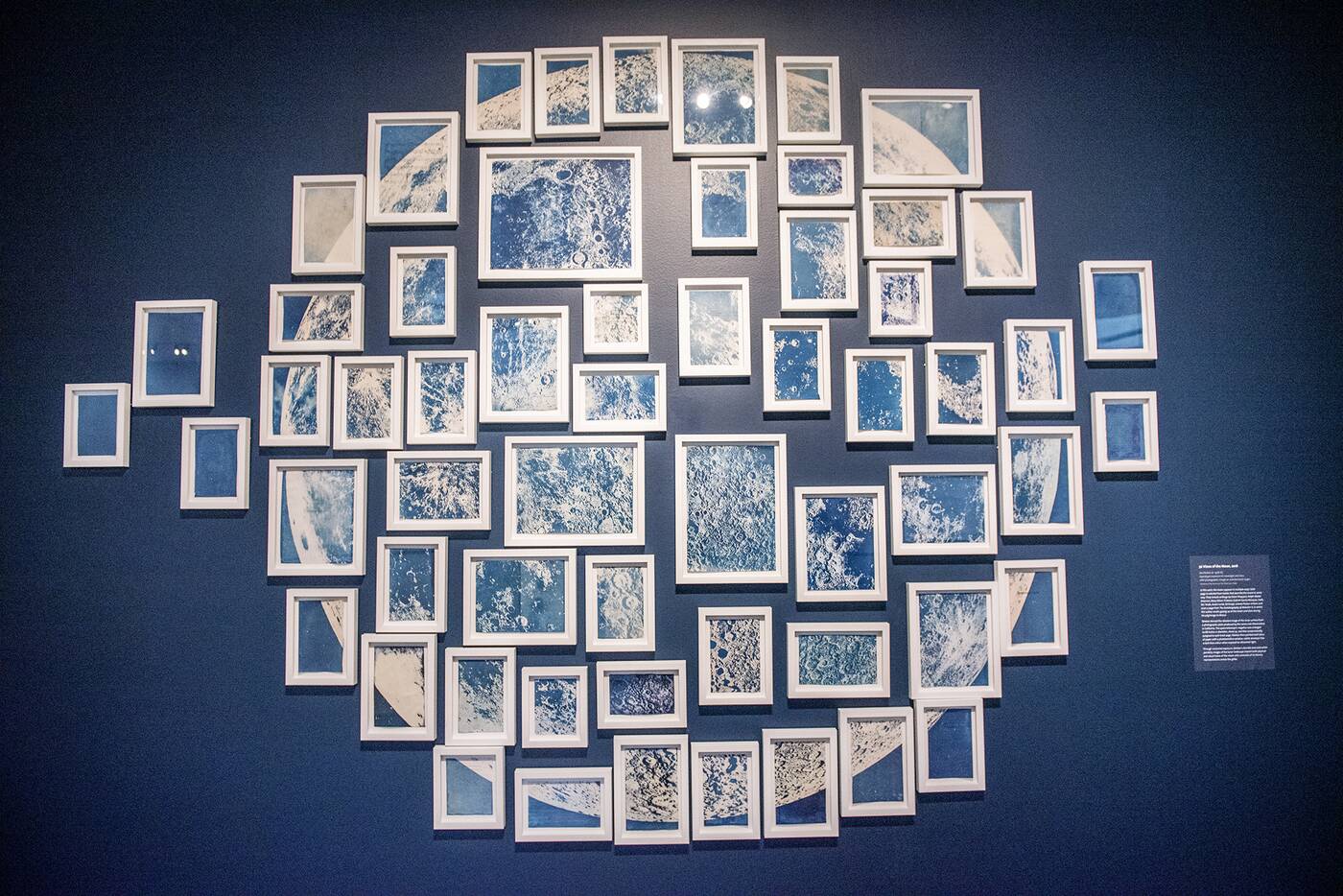 In the contemporary section, 36 Views of the Moon by Ala Ebtekar uses moon-related book excerpts, imprinted with images using cyanotype exposure from moonlight and starlight, to recreate a disassembled framed moon collage. 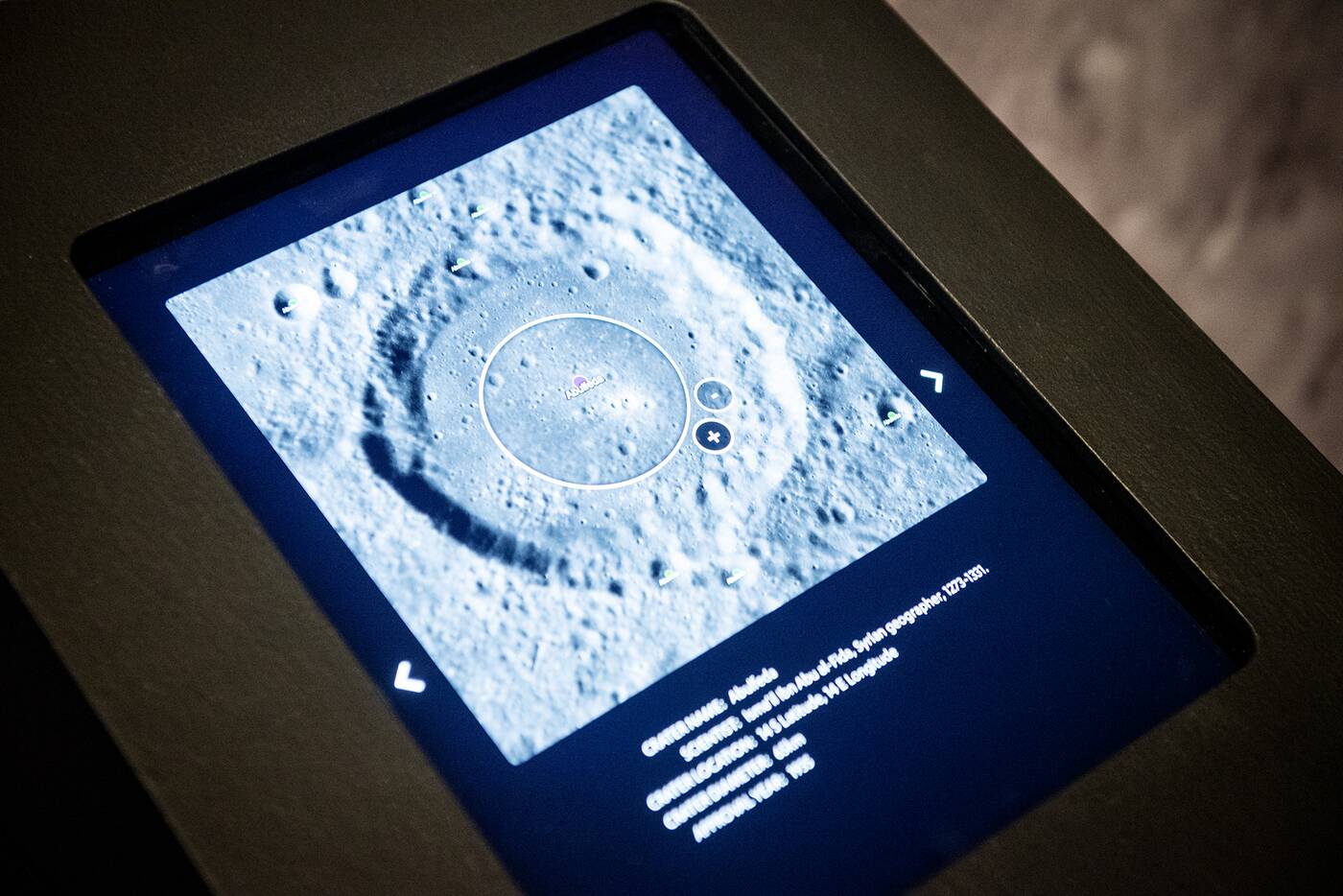 In relation to science, you can scroll through digital photos of craters named after notable scientists of the Islamic world, showcasing 23 named craters out of hundreds in total. 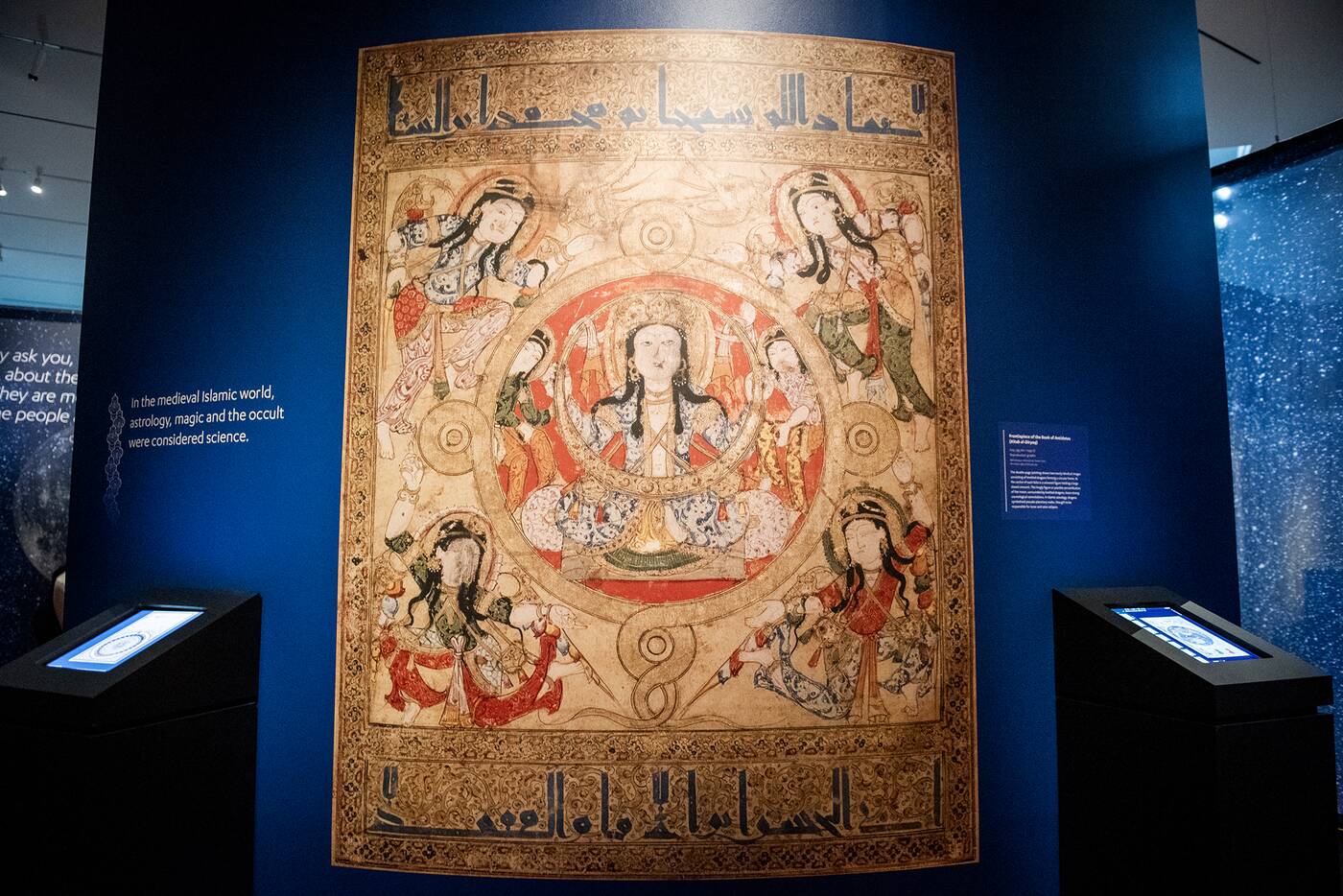 Interactive stations include an area allowing you to leave poems to the moon, written with typewiters. 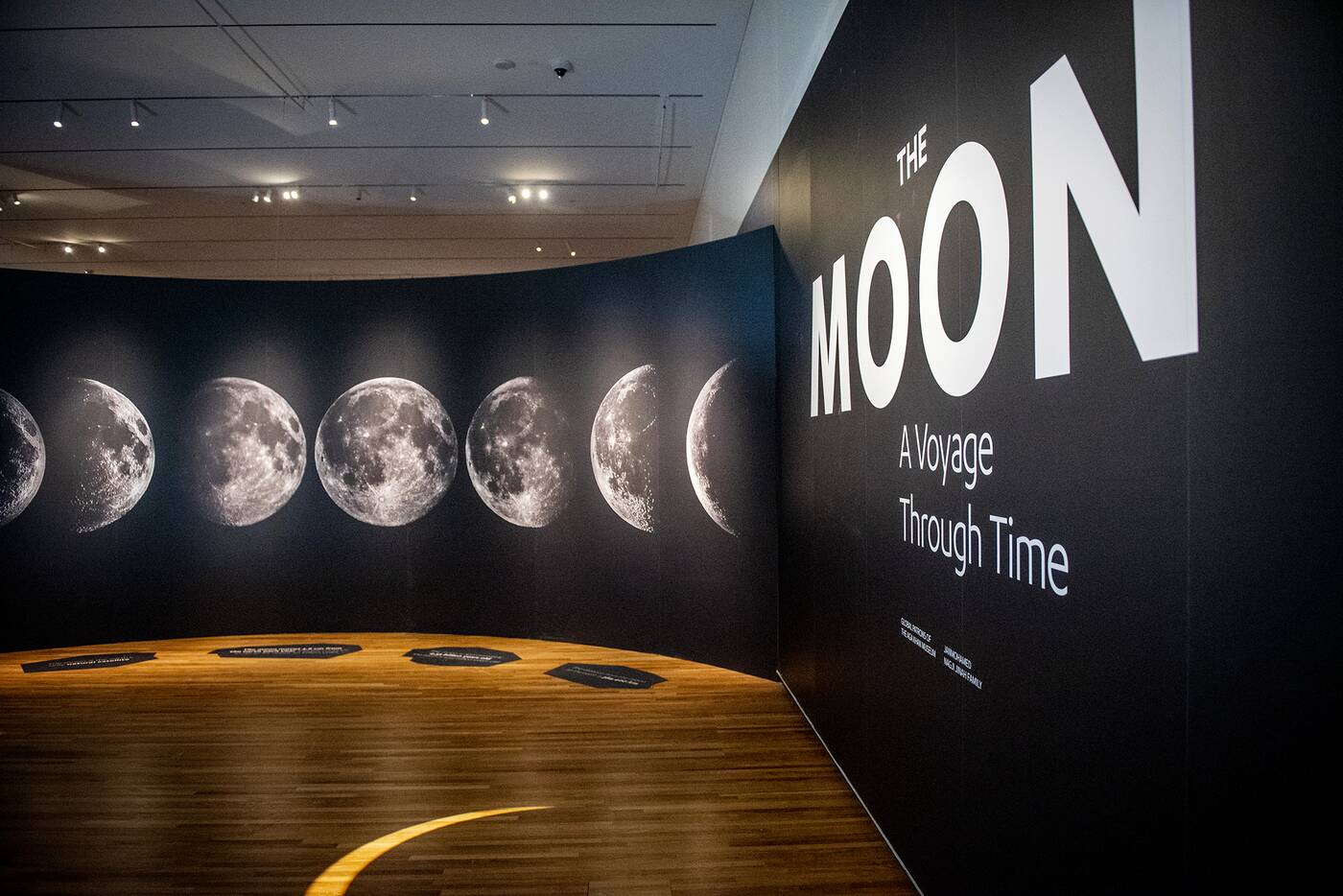 Ownership of the moon is as illusive as the moon itself, and thanfully, this exhibit focuses less on the push and more on the pull of mankind's longing for this celestial orb. The peaceful, almost extraterrestrial plains of the Aga Khan make a fitting home for this mystical installation.

The Moon: A Voyage Through Time can be viewed with a general admission ticket to the museum, and runs from March 9 until August 18. 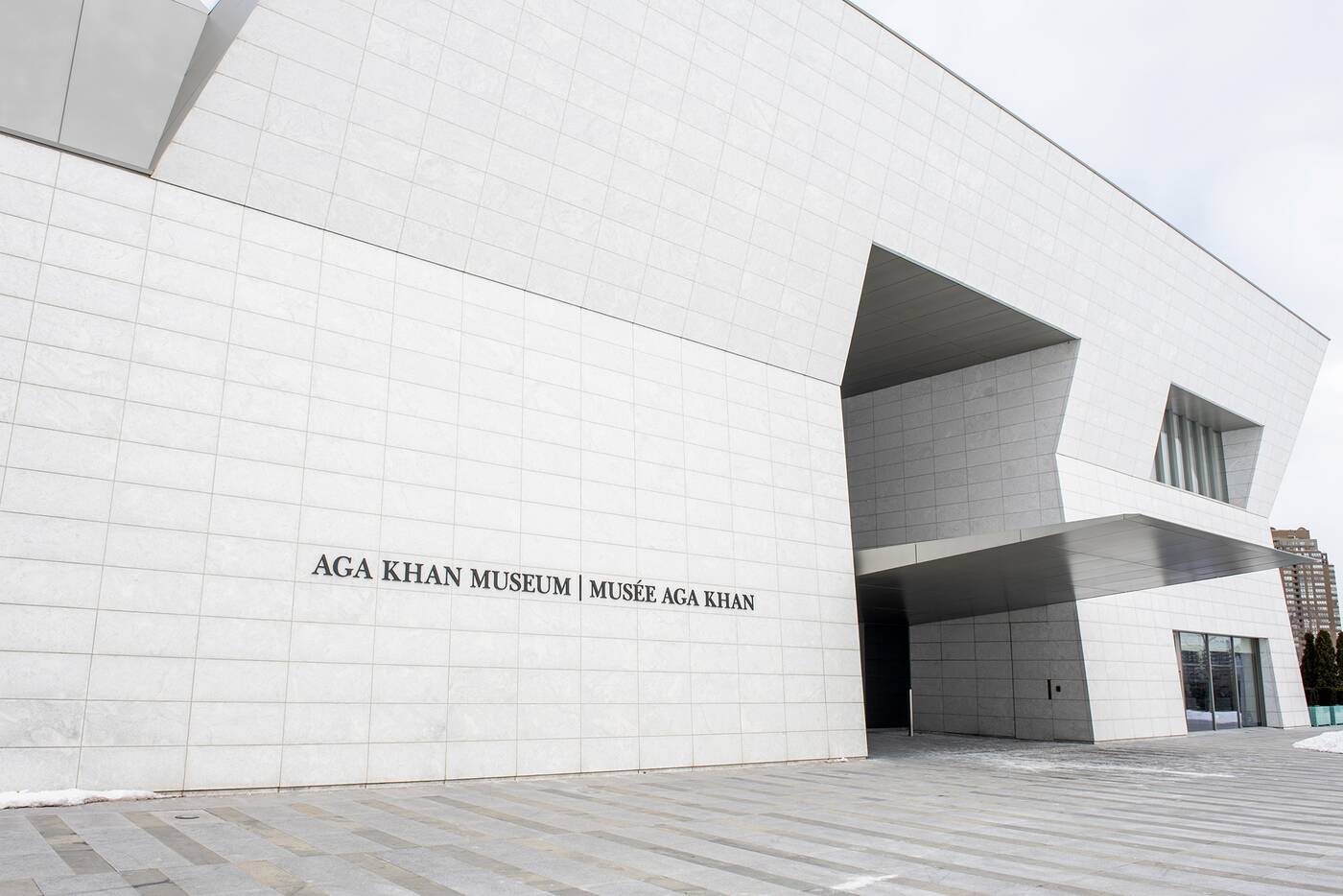