The owner of a popular Toronto-based greeting card line is tired of watching huge corporations profit from her work without getting anything in return—and there's little she's been able to do to stop it, she says, despite spending over $15,000 in copyright, trademark and legal fees.

Queenie Best started selling cute cartoon cards as a side hustle in 2008, but had become so successful by 2014 that she decided to quit her day job and focus on Queenie's Cards full time.

Last May, she opened up her own brick and mortar store in the Danforth and Coxwell area, expanding her wares to offer plushies, enamel pins, keychains, tote bags, phone cases, socks and all kinds of other cute gift items, as well as her own subscription box service.

You can now find punny products designed by Best in literally hundreds of stores around the world, including the TIFF Bell Lightbox, AGO, Juxtapose and many of Toronto's other top gift shops.

Unfortunately, you can also find unauthorized products based on her copyrighted works at places like Forever 21, Michael's, Top Shop, and, most recently, Indigo, Chapters and Coles.

Best called out the latter three businesses (all owned by the same company) on Friday after discovering a mug bearing the phrase "Let's Avocuddle" on Indigo's website.

"Come onnn Indigo, Chapters and Coles," she wrote in a post on Facebook Friday afternoon. "We've worked together before too! I have trademark on 'Let's Avocuddle' and you can find it on the Canadian Copyright Registry."

A spokesperson for Indigo replied to our request for comment on the post almost immediately to say that the company is taking this matter "very seriously" and that they're currently conducting a review.

Best says Indigo's director of PR reached out to her as well with similar information—which she's glad for, but apprehensive given how big companies have treated her in the past.

"This isn't the first time it's happened," she says of the Avocuddle situation. "Forever 21, Top Shop in the UK, Michael's, Children's Place, the list goes on… they've all copied this phrase and refused to own up to it."

"Forever 21 was extremely rude and disappointing," she continued, explaining that the fast-fashion store once carried her actual cards.

A pair of "Let's Avocuddle" pajamas appeared on the company's website last summer, but have since been taken down. That said, you can still purchase socks bearing the trademarked phrase on forever21.com. 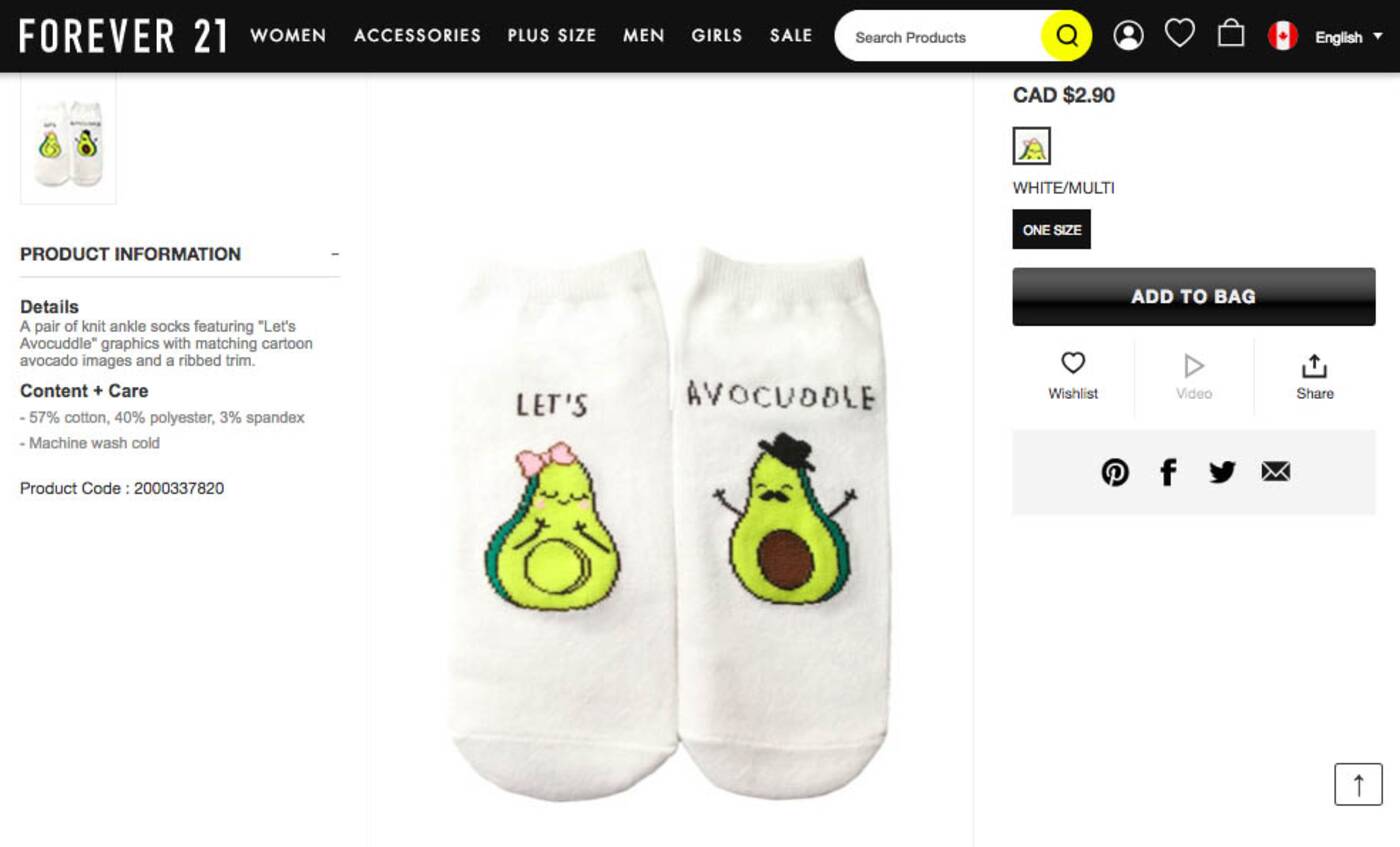 "At the time, my U.S. trademark was still pending so they took that as a free pass," says Best of Forever 21. "My cards were up on their website a few years ago so it's not like they didn't know about my work. They featured me on social media!"

In terms of other big companies, she may have valid legal claims—but suing a juggernaut doesn't come cheap.

"Every communication to my lawyers cost a few hundred dollars, and to rattle more cages could cost me in the tens of thousands," says Best. "Numerous times people would tell me 'JUST SUE THEM' but it actually takes a lot of money to even get to that point, IF the case even goes to trial."

"I'm a sole proprietor who is just trying to pay the bills in my little Toronto home, making sure my daughter has a good life," she continues. "I can't compete even if I'm in the right."

And therein lies the rub: It's hard for independent artists and proprietors to even challenge companies with millions of dollars at their disposal in the first place.

"I've spent over $15,000 in copyright, trademark and legal fees but it just proves that small businesses have no pull when it comes to securing and protecting our artwork," says Best. "Independent designers don’t stand a chance against the big guys."

Still, she's holding out hope that Indigo—the first big Canadian company to violate her trademark—will do the right thing.

"If they cooperate, it could be a great positive example of how big companies can actually work with independent designers instead of hiring freelancers to copy artwork that is already available," she said.

"If they don't cooperate, this exposes more of what artists go through on the daily, how we struggle to make a buck and how it's impossible to protect what’s ours even having copyright and trademark registries. "