Strip lashes, gold jewellery and a festive pop of colour are all it takes to elevate your look for the holiday season, snow people, as evidenced by the runaway success of what some are calling "Farah the snow Jatti" or "Frosty the Aunty."

Forget Frosty the snowman we got Farah the snow Jatti up in here pic.twitter.com/p4d7VZWqQN

This stunning, Brampton-based "desi snow girl" has been tearing up the web since late last week, when photos of her vibrant visage hit social media platforms.

Today, as news of her existence spreads, she has become a bona fide internet sensation—and with good reason. I mean, look at her. Have you ever seen such a pretty character made from three big balls of snow? 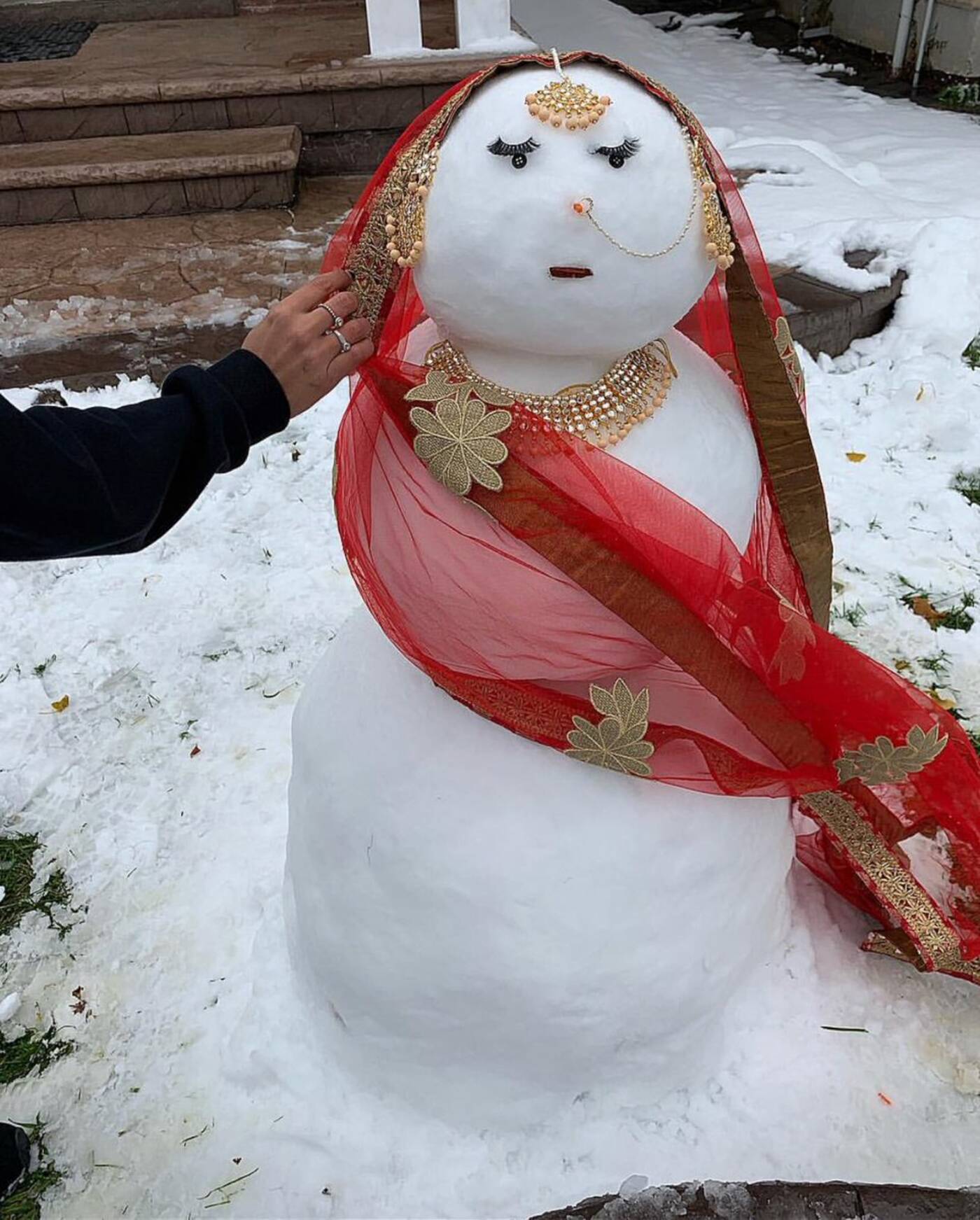 Her actual name, we have learned, is "Saddi Juliet," and the story of how she came to be is even more beautiful than her pretty lashes.

"My friend Daljit [Waraich] came from India and it was her first winter here in Brampton!" says Jassu Kingra, 19, who first posted photos of the creation to her Instagram page on Friday. "She called me and told me she wanted to build a snowman, and then she asked how to build it and I invited her over to our house."

With the help of her Jassu's two younger sisters Navi, 15 and Bini, 9, the teen girls built what turned out to be a flawless, three-tiered snowman.

Bini Kingra, 9, built Saddi Juliet with her older sisters and a friend from India who is celebrating her first winter in Canada. Image via Jassu Kingra.

"We wanted it to be perfect because we wanted to post it on our social media sites," she explained. "And my friend wanted to show her family in India, so we had to make it perfect and show her family that Canada is the best even during the winter!"

Jassu says that the girls were inspired to "do something different" with their creation. "We always see regular snowmen...we wanted to add a traditional touch to it."

So, at Navi's suggestion, the girls added jewellery and false lashes—perfect to promote their respective beauty and jewellery-focused Instagram business accounts.

Jassu uploaded some photos to Instagram and, thanks to a signal boost from one of her followers, Isha Singh, the snowgirl quickly went viral.

"We have a story behind this snowwoman, we are calling her 'Saddi Juliet' for a reason," she said of the character's name. "But that reason cannot be out yet... In order for that storyline to be completed we need it to snow in Brampton!"