Someone just painted a bunch of photos from the Toronto Archives

Anyone who likes checking out old photos of Toronto will be intrigued by this series of paintings by local artist Hanna Kostanski, which depict various street scenes from the city's past.

In A Vibrant Past, she takes images from the Toronto Archives and reanimates them with colour, texture, and a keen eye for minor details that collectively inject the originals with a new vibrancy that brings our city's history to life.

"These images span several decades and... celebrate the many past incarnations of Toronto, and the ways in which people helped to shape it," Kostanski says in summary of the series, which will be on display at Urban Gallery later this summer. 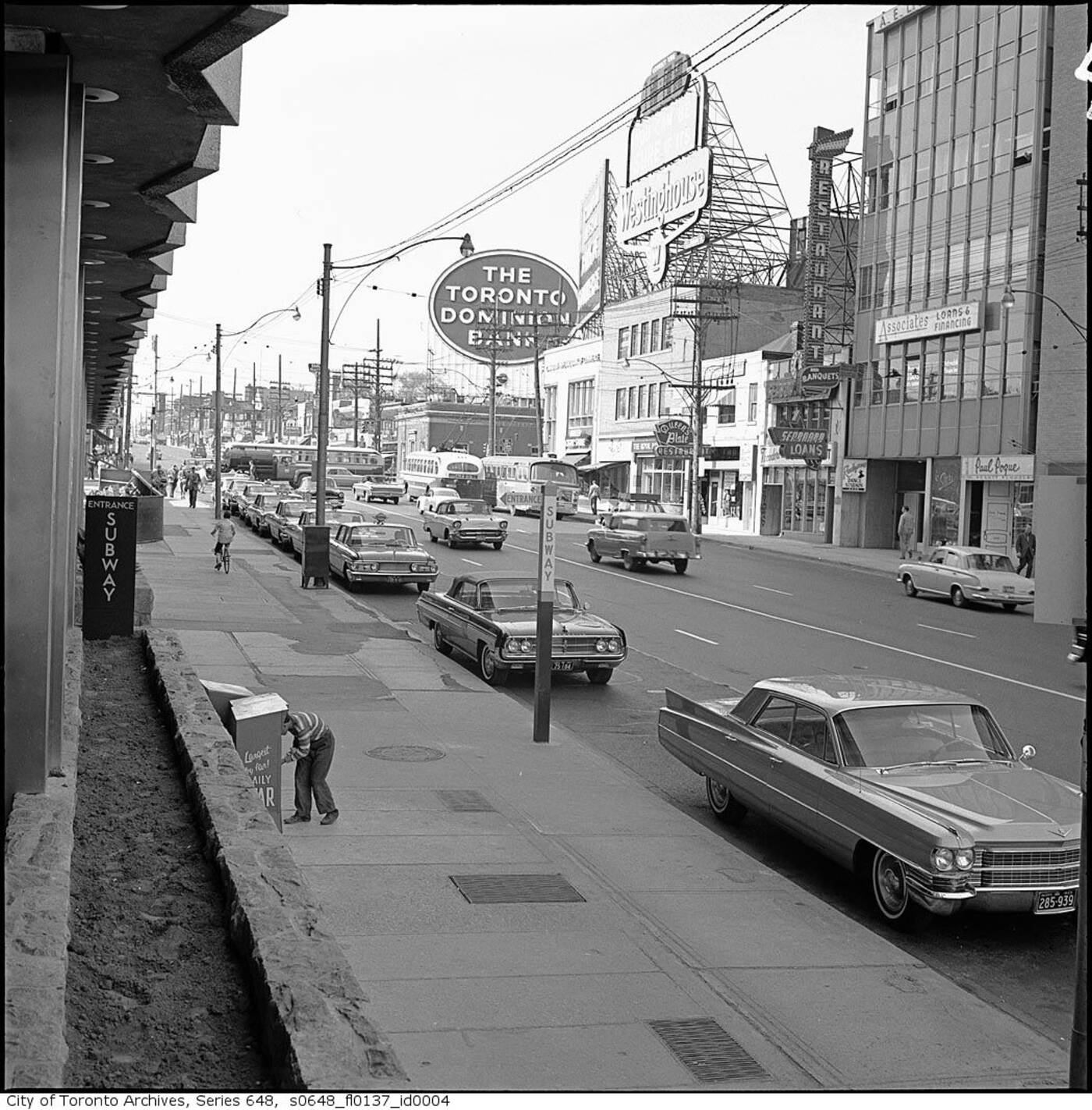 Taxis queue outside Eglinton Station. Photo by Eric Trussler via the Toronto Archives.

To give you an example of how the paintings dramatically change the source materials, I've dug up one of the photographs the artist painted. The original is an Eric Trussler photo showing taxis lined up outside of Eglinton Station. 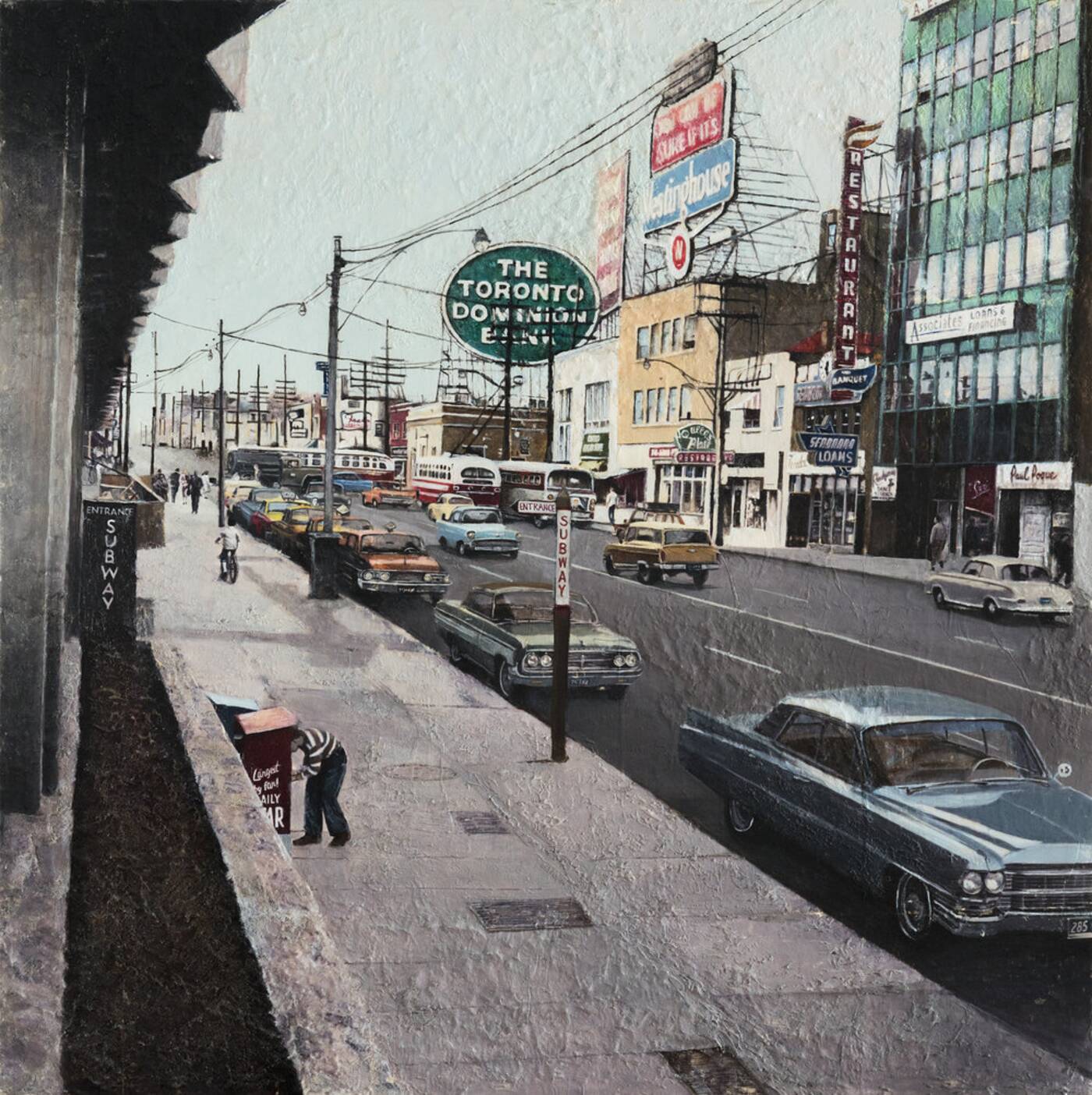 I've always liked this archival photo for the way it shows off the huge signage that defined the intersection in the 1960s. Seeing it in colour, however, really highlights the enormity of the billboards, but also draws attention to the kid with his head in the newspaper box. 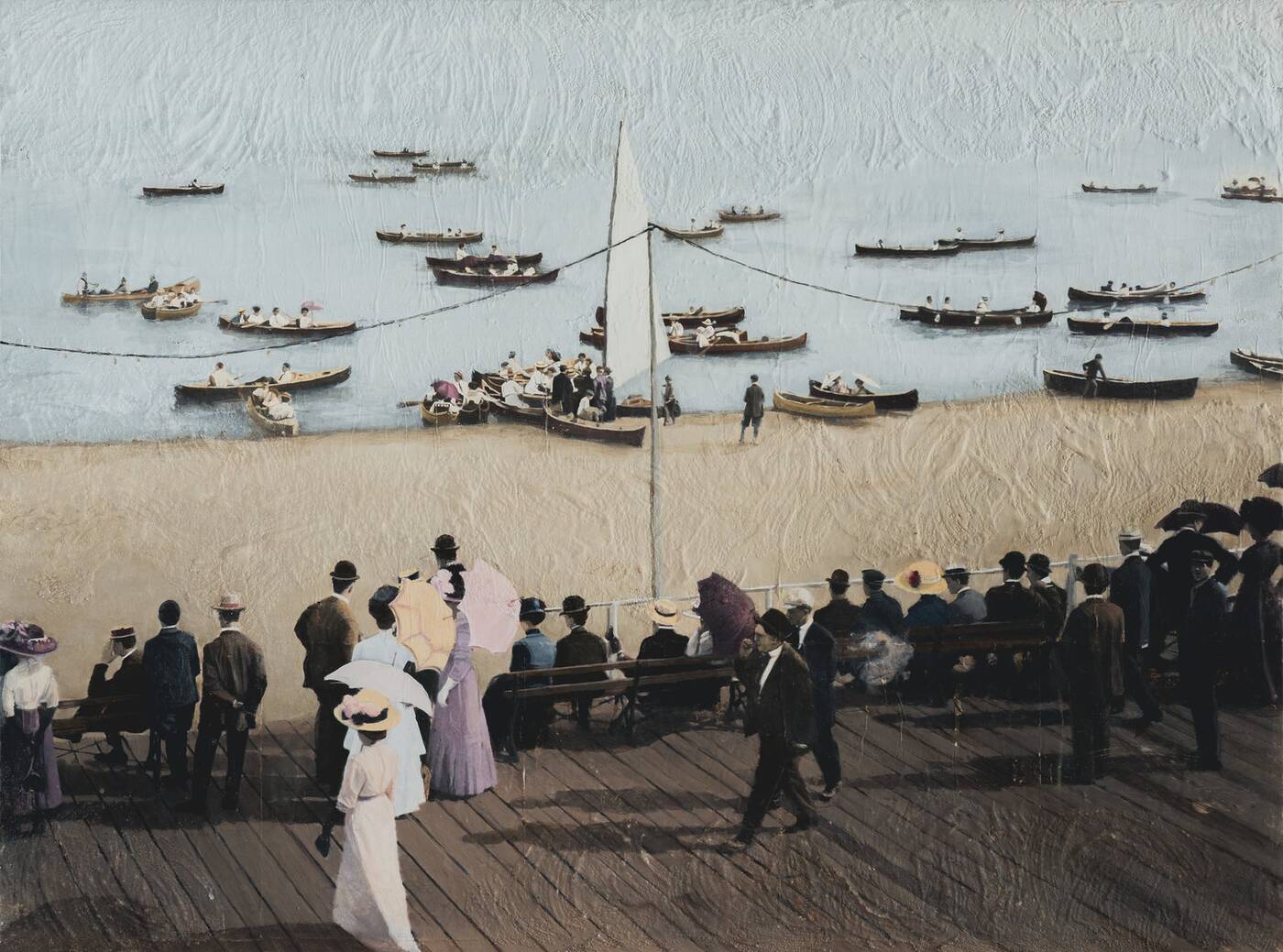 Other paintings in the series have their own allure. This beach scene from the early 20th century is a reminder of how much fashions have changed. It also shows us how long we've been heading to the same places for our weekend entertainment.

"I chose [this one] simply because there is so much to like about it: its lovely composition, the post-Victorian fashion, the interesting people and location, and the fact that it depicts a moment in Toronto’s history that seems almost too dreamily beautiful to have been real," explains Kostanski. 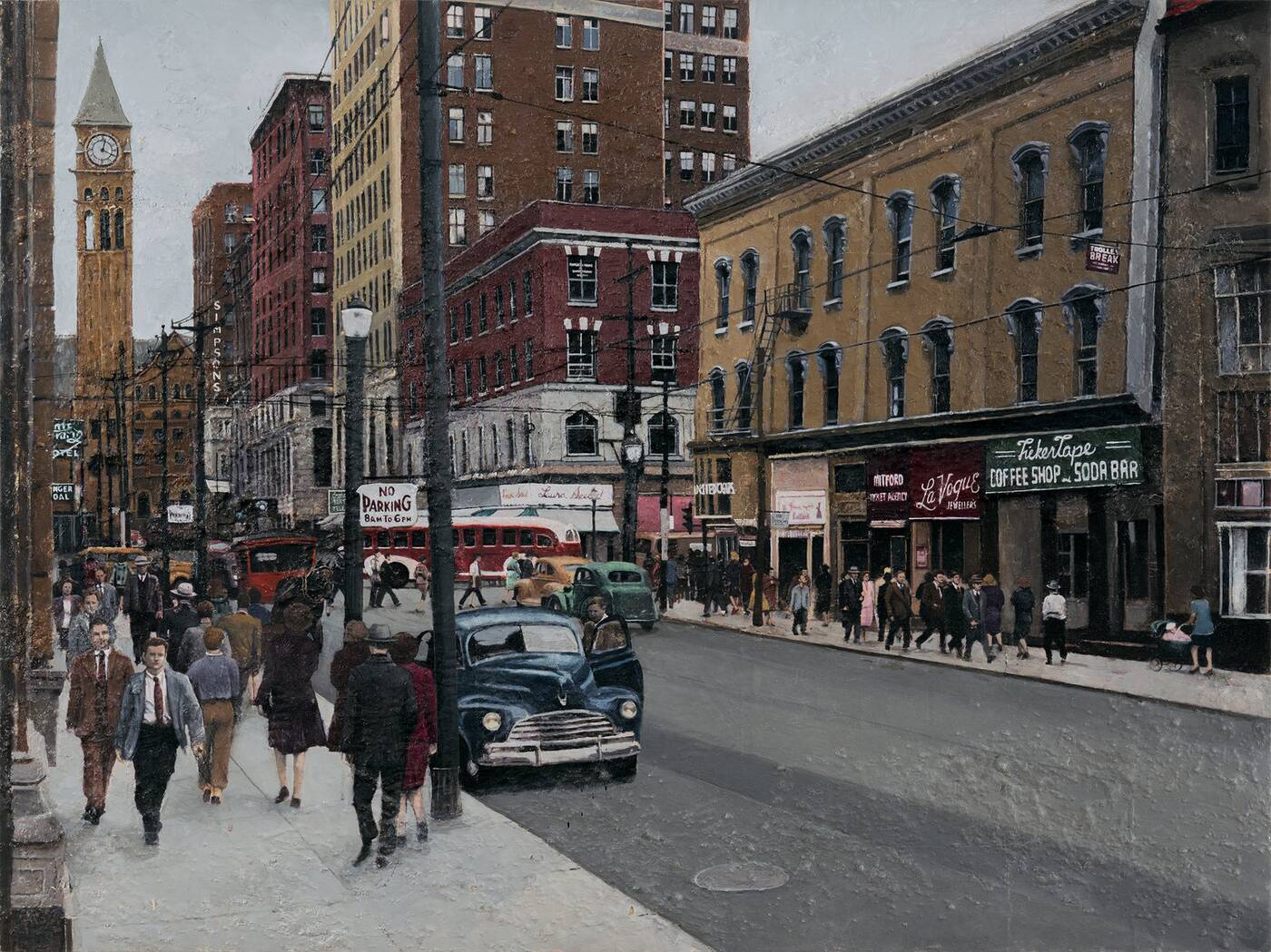 Here you get a good sense of the hustle and bustle that defined Bay Street in the 1940s. With all the retail at street level rather than in the PATH, there was more street activity during this period than there is today.

This painting depicts a street scene looking at north on Spadina at Queen and indicates the importance of this intersection. You can even see the underground public washroom at the left-centre of the frame (its surrounded by the iron fence). 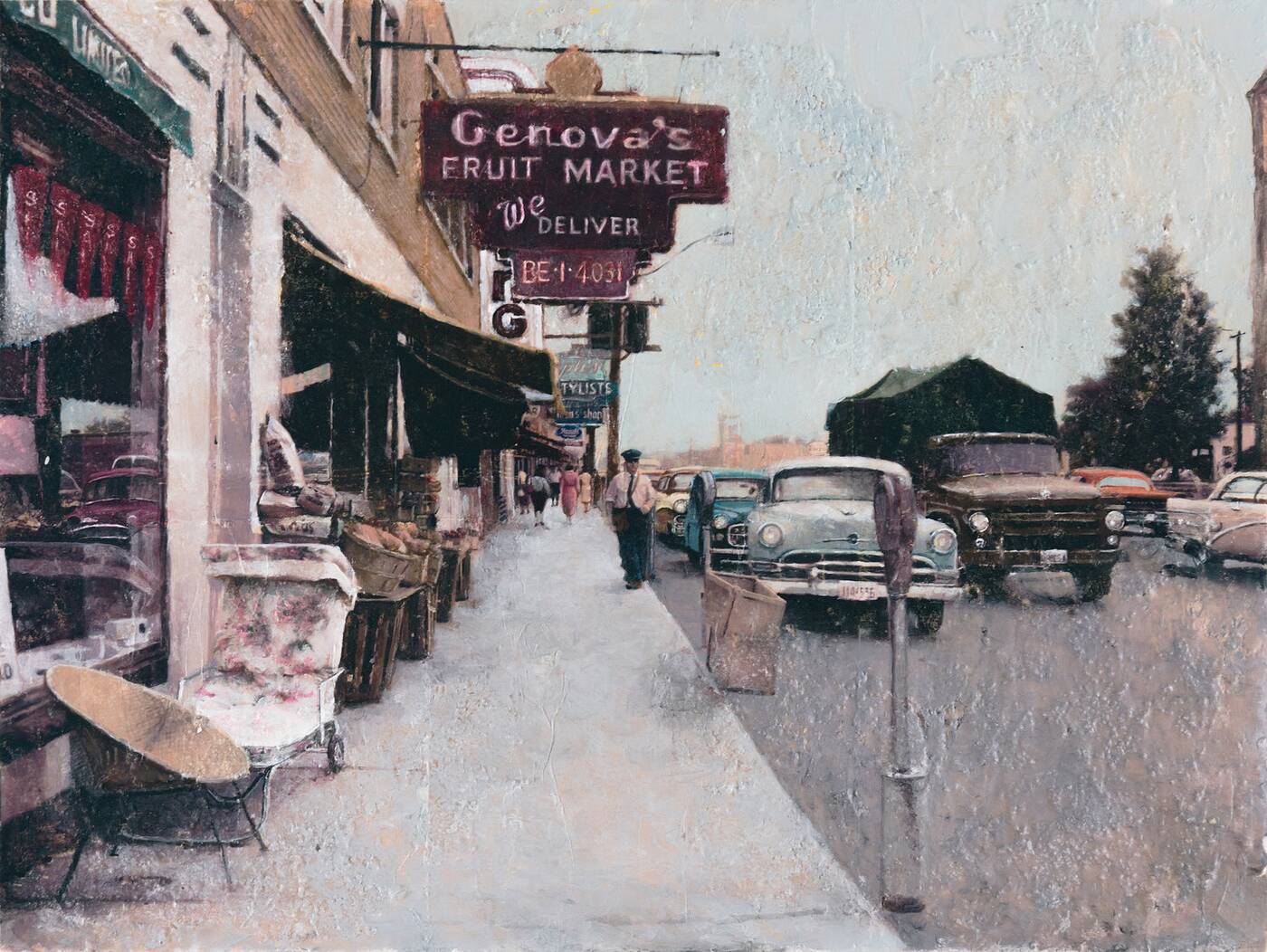 Kostanski describes the source for this image of Bloor West in the late 1950s as a "lovely representation of the optimism of post-war Canada." Once again, the painting focuses on the people who occupy the frame, in this case the uniformed man strolling down the street.

There's a whole world of fascinating photos housed in the Toronto Archives, but it's refreshing to see some of them given this painterly treatment, which seems to draw the city's past just a bit closer for a few brief moments.