Street art in Toronto is generally looked upon favourably. We have street art tours, alleys, laneways and high-profile murals that showcase the best local and international artists. It's a far-cry from the late Rob Ford's crackdown on graffiti.

That's why one local business owner Craig Small of Juggernaut was perplexed when he got a letter from the city, telling him to remove a piece of street art he commissioned from his property.

The municipal code on graffiti defines street art murals as, "A mural commissioned or approved prior to its creation by a property owner or occupant, where the primary purpose is to aesthetically enhance the surface it covers and the general surroundings."

Small and his business partner commissioned local artist Kestin Cornwall to paint a mural on their property at 18 Croft St. Cornwall decided to depict Drake, who Small calls an ambassador for the city.

Cornwall completed the mural on Sunday and by Wednesday, Small had received a graffiti advisory notice from the city. Why do they reserve the right to deem what is appropriate on private property? I have a huge issue with that," says Small. 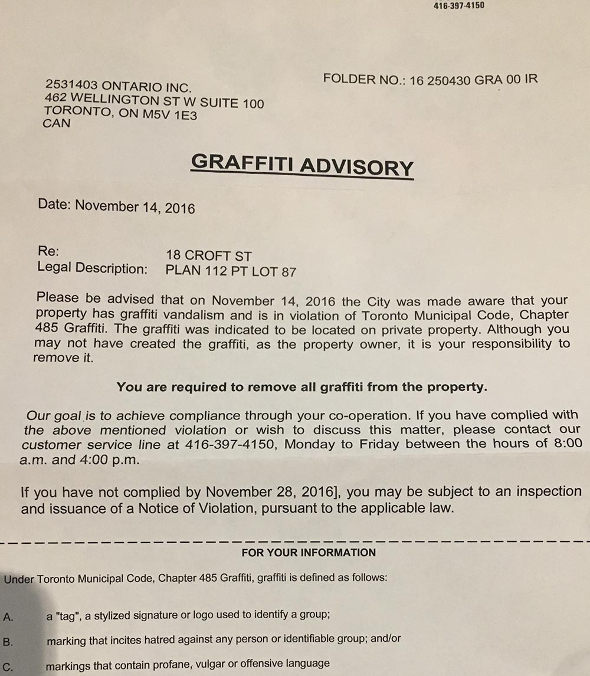 We reached out to the city for comment and Elyse Parker, director of the Public Realm Section at the Department of Transportation services told us via email that she was looking into this incident.

He thinks this is especially ironic, considering his neighbours at the ad agency J Walter Thompson caught wind of Cornwall's mural and filmed it for Tourism Toronto.

While aware of the graffiti advisory, Small doesn't want to take the mural down. "We don't plan to remove it," he says. "If the city wants to come after us and take it further, bring it on."