Big, glossy underwear ads are a pretty common sight in the city and on our public transit system. But put a half naked man up there and you'll hear a very different story.

This is what Yuk Yuk's comedy club and the TTC are all worked up about. Yuk Yuk's latest campaign shows a naked man wearing a skimpy gold pouch covering his genitals doing every day things like playing volleyball, holding an umbrella, wrestling with a skeleton mask and shivering in a hideous Christmas sweater.

The TTC banned the ad because the imagery falls under clause 14 of the Canadian Code of Advertising Standards, which includes "unacceptable depictions or portrayals."

It's pretty tame because of the nature of the message, which states, "Looking for the best comedy in the city? We've got you covered!" Get it?! But the TTC disagrees. In speaking to the Toronto Star, TTC spokesperson Brad Ross claims the man in the ad is unrelated to the product, versus a lingerie ad where the woman is wearing the product. 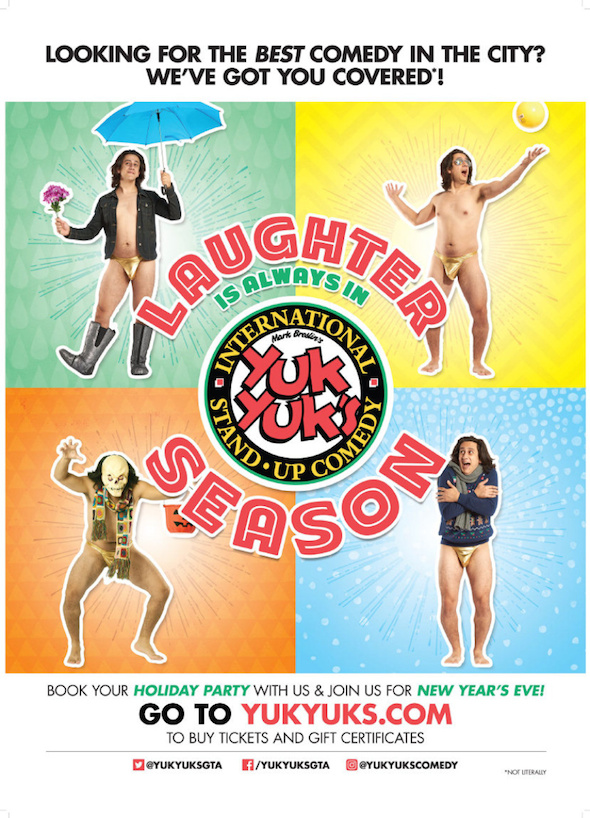 Kyra Williams, vice-president of operations, for Yuk Yuk's is having none of it and is continuing to shoot back at what she claims are double standards enforced by the TTC.

According to Williams, the Yuk Yuk's team is creating something new, and less naked, so that the ads for their new season can run on subway cars.

Do you think the TTC was right to reject the ad? Let us know in the comments.