Toronto has a lot of arts and cultural festivals, but none of them are as important and forward thinking at Manifesto.

They're celebrating 10 years with 10 days of programming from September 9-18. It's their biggest, most ambitious festival yet, and though it's a youth-focused fest, there's most definitely something for every taste and interest.

"In Toronto for a multi-arts, youth-focused, not-for-profit festival to turn 10 is a very serious accomplishment and we're really proud of that," Daniel Tal, Director of Operations and Development at Manifesto (and Dudebox member) says.

"This doesn't happen for every organization, and it's all because of the family at Manifesto and the broader community that Manifesto is part of. It's always been a team effort that's brought the organization to this scale of celebration every year."

The festival is spreading itself all over Toronto, taking up spaces and making them safe and accessible to a whole new audience. The opening party alone (RSVP here) will take over the entire Mascot Brewery building with Canadian reggae DJ master DJ Power and Boi-1da spinning. Those are just the headliners; it's a crazy crew of names and music to start things off.

Beyond the parties, of which there are many, the most important part of the festival is the Summit. This year it's the largest one in festival history with four days of and unique programming and industry leaders.

Workshops, panels, networking ops and the chance to meet directly with grant officers to help understand how to apply and get money to make those dreams come true. It's all free, but registration is encouraged for all three days. 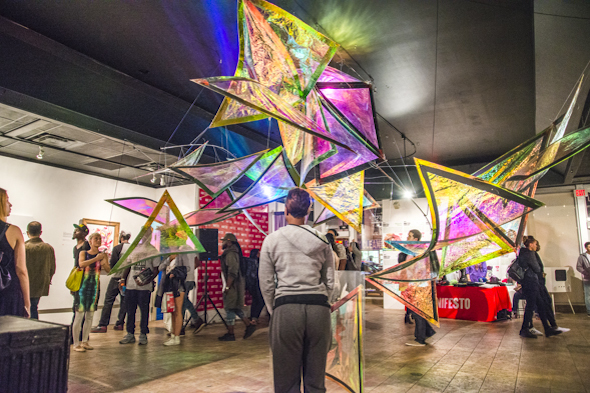 There are also talks with Director X, Stacey MacKenzie, Desmond Cole, and a Yes Yes Y'all panel. "Basically anything that's important and matters right now in Toronto and the world," Tal says, "we're tackling it."

Saturday night is the launch of another key piece of the fest in the form of the art exhibit. It's called Fly Girl Fly and is organized by Manifesto's arts programmer Ashley McKenzie-Barnes. It's organized by women and features only women.

Both local and international artists come together for the duration of the entire festival inside what used to be the Lower Ossington Theatre. Manifesto has taken over the backspace and transformed it into a gallery, which will also serve as the party spot opening night with sounds from Yung Bambii, Killa Kels and Sunclef.

The "celebration of girl magic" includes a photography show from Chicago's Shani Crowe, works from Toronto's Rajni Perera and Esmaa Mohamoud and eight other artists. It's an impressive and bold piece of the Manifesto puzzle. 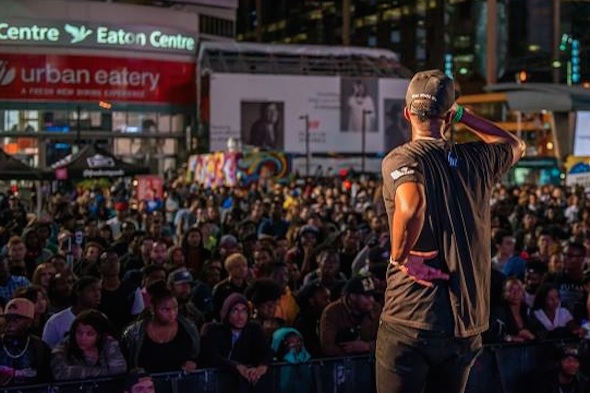 "It's the biggest and longest festival Manifesto has ever had," Tal says. "We are striving to speak to every discipline we've ever focused on which is music, visual arts, dance, eduction and subsidiaries like film, culinary arts, spiritual arts.

"Manifesto started 10 years ago when a group of young creatives got together and identified the barriers they facing and decided that the most effective way for them to overcome them was to develop a platform for themselves since nobody else was doing it," he continues.

"That's why they designed the festival. They built they're own vehicle. That's always been the spirit of Manifesto is doing it ourselves."

Below are the major events happening during Manifesto. Check out the festival site for all ticket and schedule info.

The Eaton Centre in Toronto just got a colourful makeover