This is what Ontario Place looks like right now

Ontario Place lives again. The defunct amusement park has been resuscitated this month as part of a massive art project that will reanimate the site's previously dormant features like the Cinesphere and silos.

The in/future arts and culture festival launched last night and will run until September 25. Spread out over 14 acres, it's truly a feast for the eyes, ears and belly (there are food trucks and bars scattered all over the property).

Toronto art curators Art Spin together with dozens of artists and art organizations worked together to populate the abandoned island with all types of activations. It's best to head down over the iconic bridge in the afternoon to appreciate things in the daylight before they light up at night. The festival is open until 11 p.m. every night. 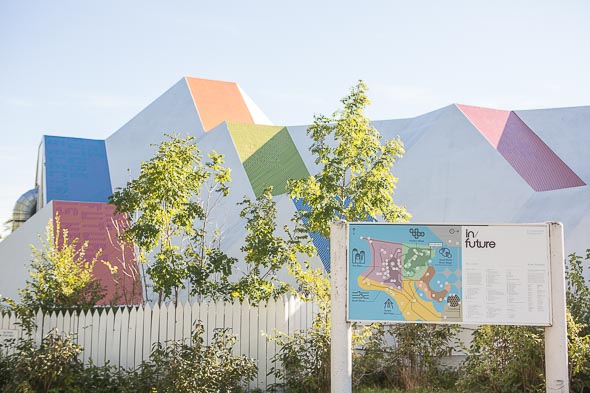 Memories will come rushing back from the minute you enter the main pavilion. If you had never been as a kid, you'll be hit with a different kind of rush, and that's one of strolling onto another planet.

Head into the gift shop or take a look at a map to figure out your route around the island... or don't. The festival is made for wondering and discovery. Visitors have access to pretty much anywhere they want. 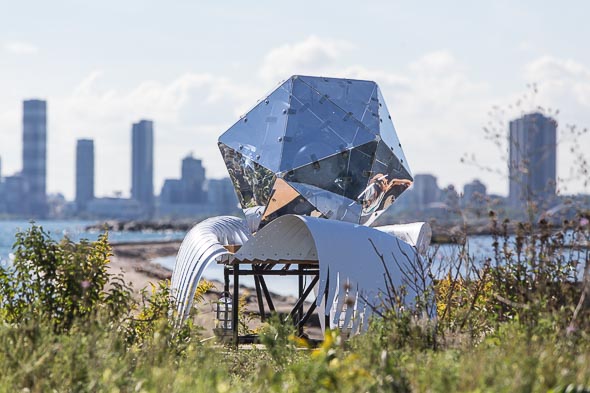 Head to the water if you're there during daylight and check out solar activated pieces like the Trillium Icosaflorum by Rob King (ok, also check this one out at night, it's so cool). It's one of the many fascinating pieces placed next to the water, giving folks a view of the city and lake Ontario they haven't seen in over four years. 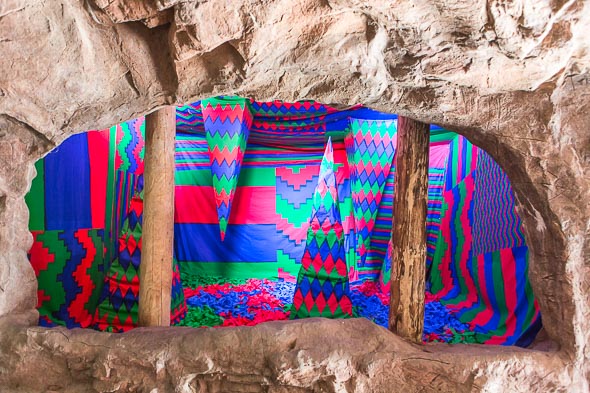 After you've walked around outside, start heading into the cave and crevices of in/future. This piece inside a cave tunnel by Philippe Blanchard. It's a lot of 3D fun. 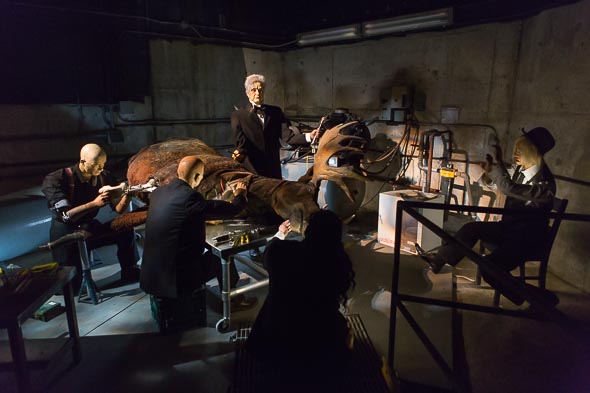 This will lead you Max Dean's two-part masterpiece called Still. It's in reaction to Ontario Place's Wilderness Adventure Ride. If you remember this log ride through the park, you'll gasp. If you don't, you'll also gasp. It's terrifying and amazing all at once. 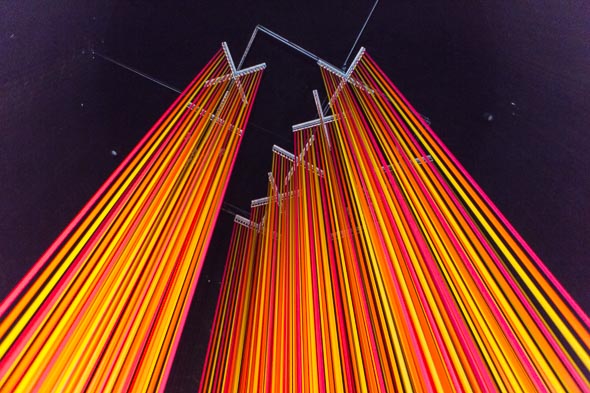 Head out of the caves and into the silo structures next. They're all interconnected and feature different works. The pieces will change through the festival so check the schedule (or don't). The installation depicted above by Gareth Lichty is a stunner. 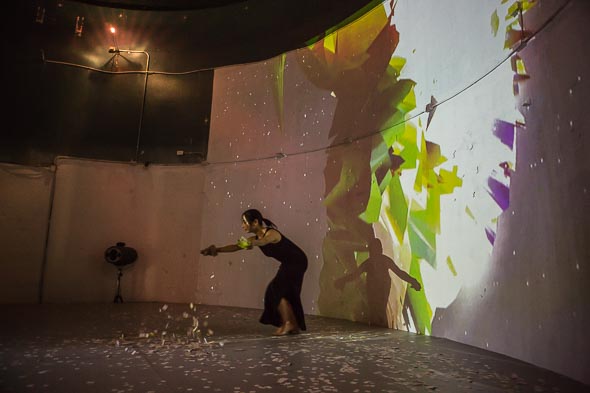 The Peggy Baker dance show is an interactive experience in one of the silos with the coolest acoustics in the whole place. 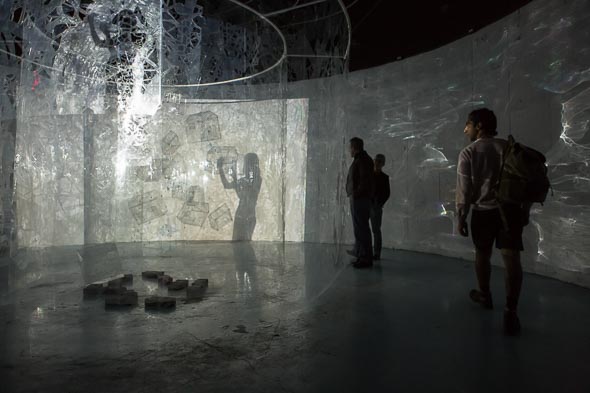 Head through the hallway of mirrors and into this beautiful projection piece by Ed Pien. The sights and sounds and performance of this one are jaw dropping and so delicate and pretty. 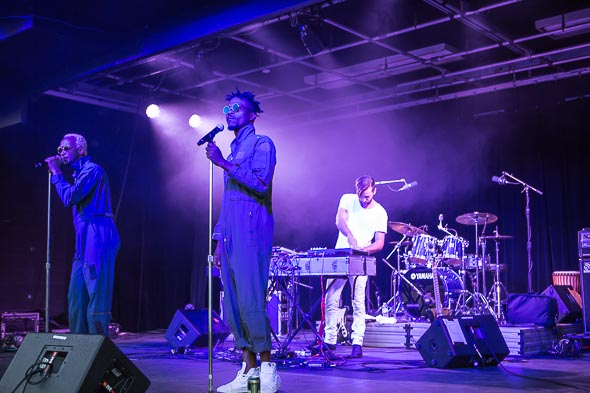 While you walk around you'll head pulsating beats, horns and voices coming from the main entrance area, and that is the Small World Music Festival happening. Performances throughout the day and night, every day and night are a perfect fit for the fest. Abakos from Montreal is a space-y example of the A-grade entertainment. 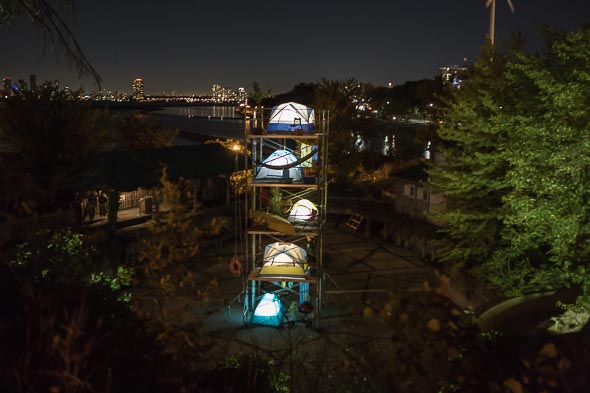 After the sun sets, it's a whole new festival and pieces you walked past earlier are now animated. The tent village in an abandoned pool by Michael M Simon is just one such example. 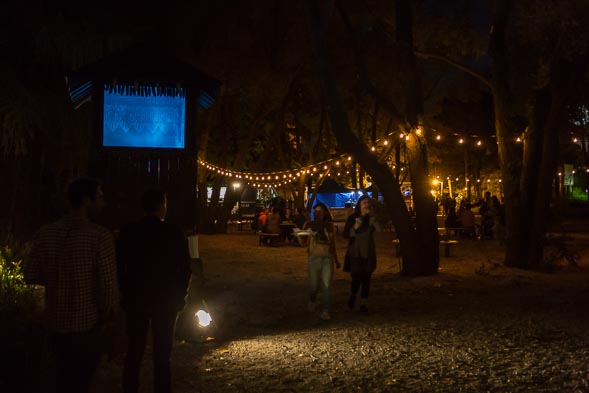 There's a gorgeous beer/wine garden that sits atop the island overlooking Lake Ontario and soaked in the glow of twinkling lights. It's the perfect spot to take a break, have a drink or a snack, and run into people you know or don't know. The vibe is easy and friendly. 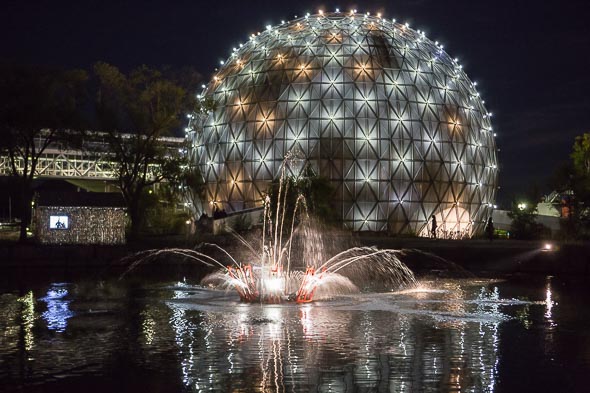 in/future is unlike any festival the city has ever seen. It's a massive creative endeavour, a multi-disciplinary 10-day art party that invites the city to step back in time, and leap forward into the future at once.

It's so relaxed, creative and doesn't it take itself too seriously such that it's completely accessible as well. I didn't even mention all the films being played inside the Cinesphere. Just get down there and experience everything it for yourself.

The official website has a detailed schedule, ticket info and artist descriptions.

All photos by Andrew Williamson.