MOCCA said bon voyage to its West Queen West home on Thursday night. For its final exhibition before the museum moves to the Tower Automotive Building on Sterling Road, artist Dean Baldwin transformed the current space into the Queen West Yacht Club. "A fictitious yacht club that isn't even anywhere near the water, and it really isn't intended for anyone with boats," says Baldwin with a laugh. 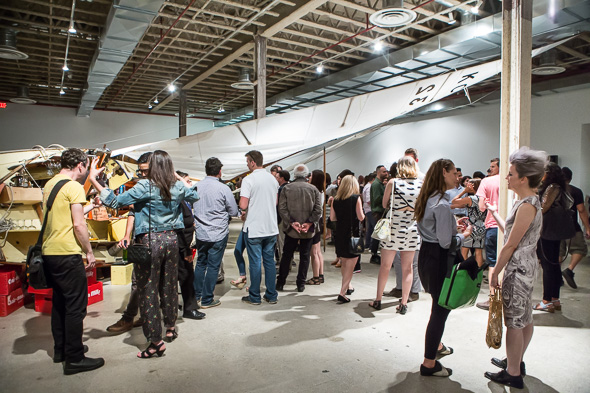 The front terrace features The Queen West Memorial Fountain. But unlike most monuments, which are comprised of durable materials such as bronze or marble, the fountain's made of ephemeral objects. 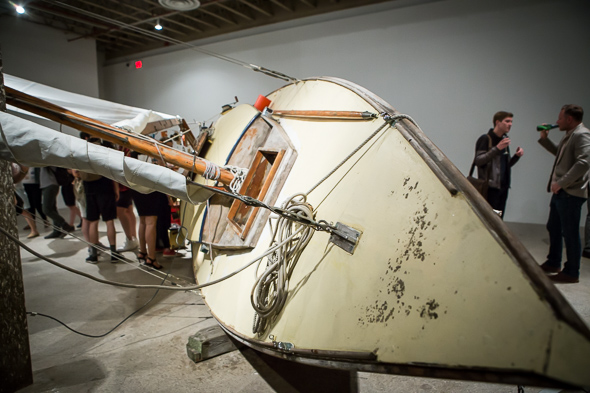 Planks of woods, pool noodles and metal platters (among other items) are tied together with thick pieces of rope. "It's going to degrade pretty fast, Baldwin says. "It might not even last the summer." 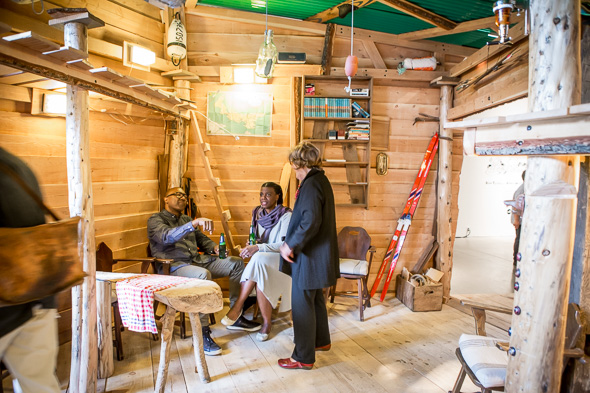 Once inside, the Chalet - a wooden cabin that was previously at MASS MoCa in Massachusetts, the Conferederation Centre Art Gallery in Charlottetown and Calgary's Esker Foundation - greets visitors with its rich, earthy smell. 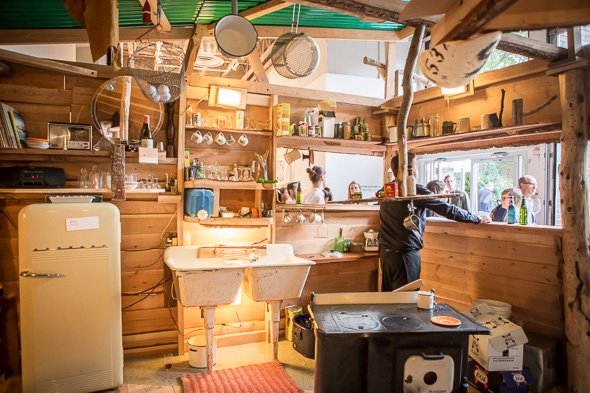 The small room is filled with a hodgepodge of items. At the opening party, guests sit sipping beers in chairs reclaimed from a lobster restaurant in PEI. There are various bottles and knickknacks hanging from the green metal roof and one loose floorboard lifts up to reveal a wine cellar beneath it. 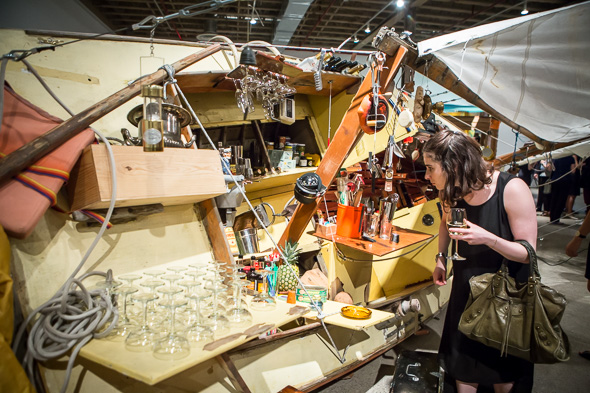 Beyond the Chalet, visitors mill about the gallery sipping on sardine-flavoured martinis served right out of a capsized sailboat - one of Baldwin's installations called Ship in a Bottle. Much of his work involves food, and this whole exhibition toys with its audience's perception of service and gastronomy. 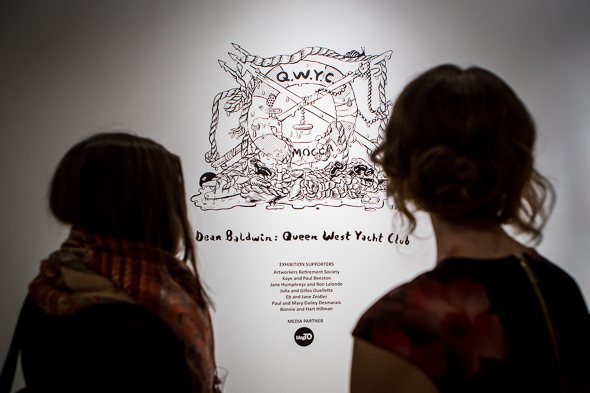 Seth Scriver created the QWYC logo. It's comprised of an array of broken nautical items - like a life preserver and rope - that have been patched up and put back together. "I've always liked taking kind of luxurious things and making them less luxurious," says Baldwin of his inclination for playing with notions of leisure and class. 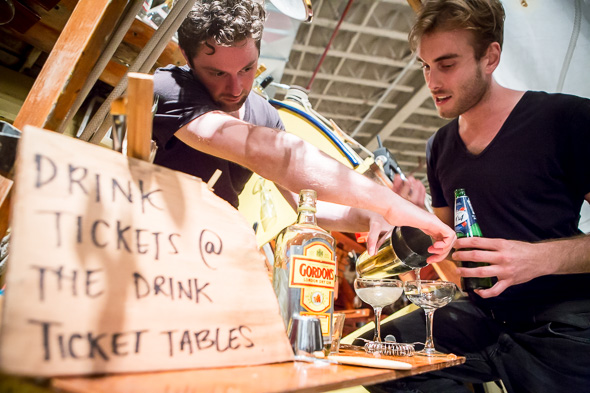 Along with the QWYC, the final MOCCA and National Gallery of Canada exhibition is currently on display. It features Elmgreen and Dragset's film Drama Queens. 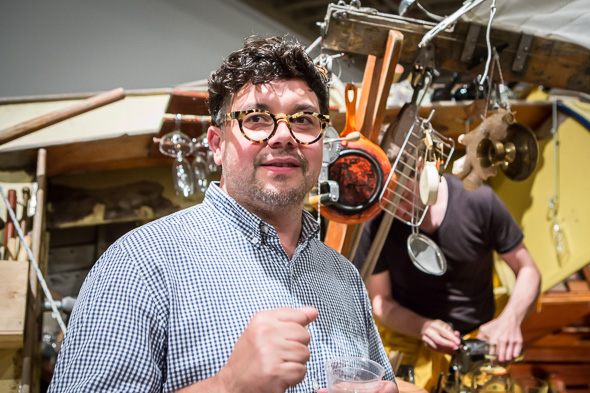 Over the course of the summer, the QWYC will host an array of social and interactive programs by guest artists and collectives. Baldwin assures the Chalet is a perfect site for such events - it even has a functioning kitchen. 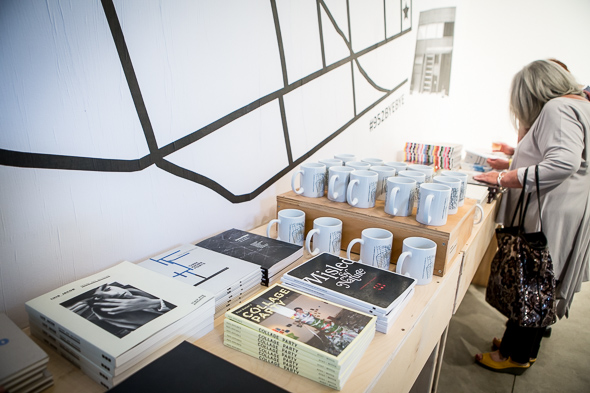 For those who are already getting nostalgic for the Queen West MOCCA, the gift shop sells towels emblazoned with the QWYC logo to wipe away any tears. But, don't despair just yet; the exhibition stays anchored in place until August 23. 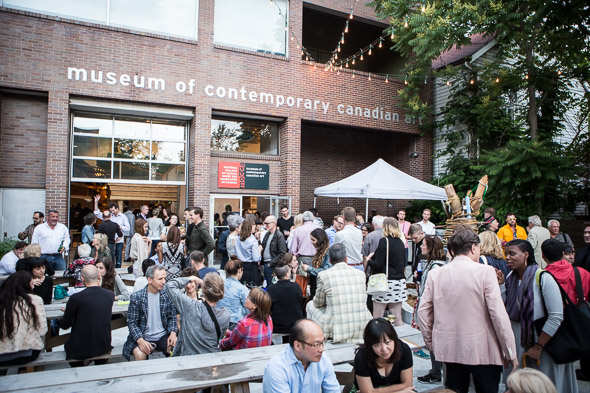