Along with hosting one of the best spring street festivals in Toronto, Dundas West has quietly been home to a monthly series that draws together and highlights the diverse set of businesses along the street, from restaurants and bars to art galleries.

"Hermann & Audrey began Second Fridays in the Lacuna Artists lofts of Chicago about a year ago and after seeing the success that it had, we wanted to replicate the event in Toronto as well," explains organizer Lauren Wood when asked about the origins of Third Thursdays. "It's also a reason for us to get to know the neighbours, to collaborate on something and create the neighbourhood we want to live in."

While Second Fridays is a gallery-focused event, the Toronto version is a more diverse affair. This month's edition, for instance, features food and drink specials from Churchill, Junked Food Co., Midfield Wine Bar, The Federal, Hogtown Cure, and Cafe Bar Pasta alongside art shows at Hermann & Audrey, The Black Cat, Narwhal Contemporary, and the Belljar. 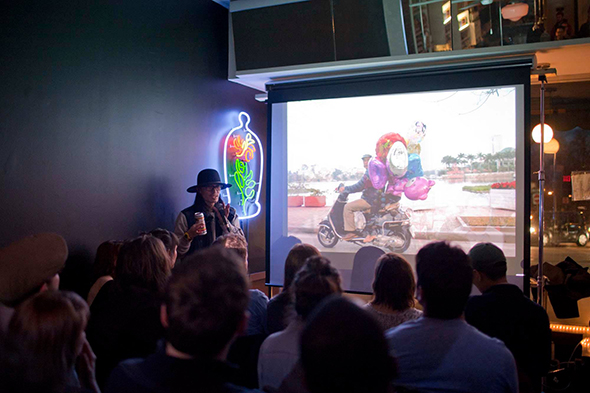 Throw in live music at The Garrison, Lula Lounge and Milk Glass plus fashion and design-oriented events at Bodega 13, Easy Tiger and Life of Manek, and you have an excellent cross section of the new businesses that have appeared on the street over the last few years.

"At The Black Cat Artspace we plan to have one of our openings fall on the Third Thursday every month and have noticed more casual visitors from outside of what can sometimes be a pretty tightly knit art scene," notes owner Andrew Williamson (who also shoots for blogTO).

That's the idea in a nutshell, it would seem: 1) to get neighbourhood folks out to enjoy nearby businesses, but 2) also to showcase what Dundas West has to offer for those who don't visit regularly. It's a way of putting the street under the spotlight. The next installment of Third Thursdays goes down tomorrow. 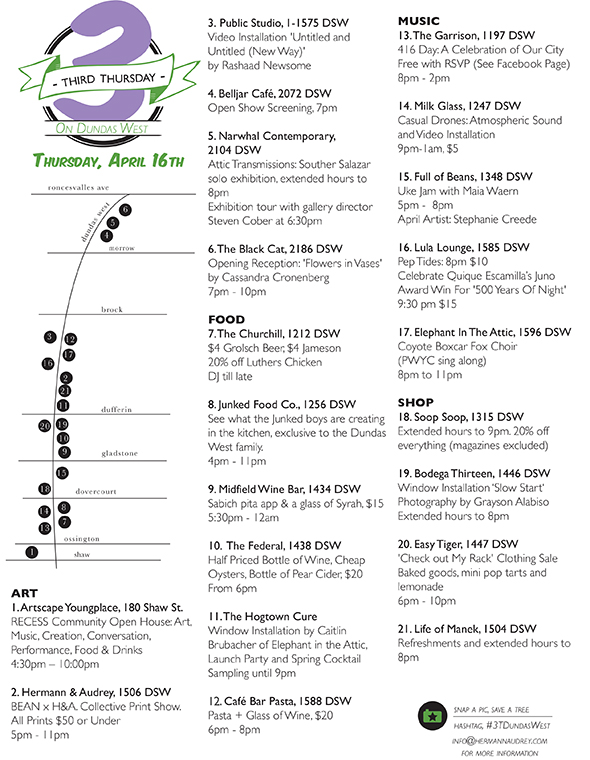