Staggering Basquiat show a triumph for the AGO

Jean-Michel Basquiat's first retrospective in Canada opens in Toronto this weekend, with nearly 100 large paintings as well as drawings, sculptures, and video filling the halls of "Now's the Time," (a Martin Luther King quote/the title of a painting) at the AGO.

More impactful and comprehensive than past shows like the Brooklyn Musem's Street to Studio, the exhibit witnesses the curators separate Basquiat's works into nine sections that successfully represent the themes and stylistic variety of the multifaceted 1980's American artist. The show's only downfall may come from Toronto itself. 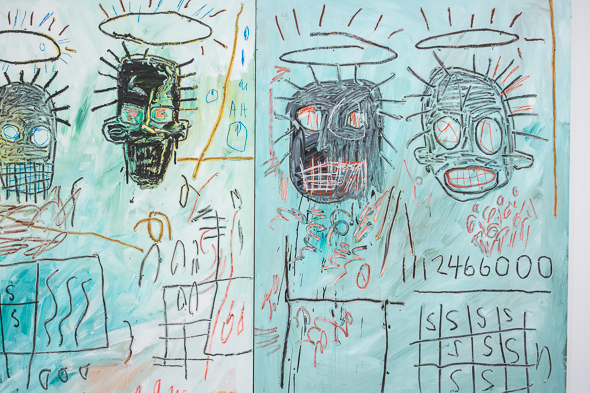 At Tuesday's press preview, speakers engaged in much trumpeting over Basquiat deserving a place in art history (yeah, what?) -- a place that, perhaps unbeknownst to Canadians, the artist achieved long ago. The idea that Toronto needs someone to explain to us why Basquiat is an artist whose work is as important as that of Munch, Twombly, and Rauschenberg is either laughable or insulting, depending on your mood.

The gallery was also self congratulatory about the community outreach it engaged in while preparing the exhibit, hoping to create a show "of Toronto" rather than "for Toronto." The AGO's obvious insecurity over displaying the works of a world famous, highly respected, extremely collectable black artist was embarrassing at best, and distressing at worst. 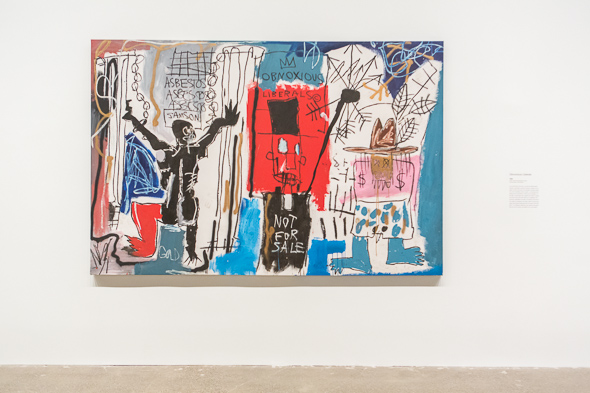 "Now's the Time" itself, thankfully, overpowers the insecurities the AGO may have about hosting a Basquiat show, and aside from some community-member-provided art criticism mounted next to a few random paintings (easily ignored), most of the public will be unaware of the self conscious swirls that accompanied the assembly of the show.

Strains of Charlie Parker prepare viewers for Basquiat's aesthetic at the entrance in a way that charms, and once inside it's easy for both long-time fans and those unfamiliar with Basquiat to follow the gallery's curatorial logic from one section to the next. 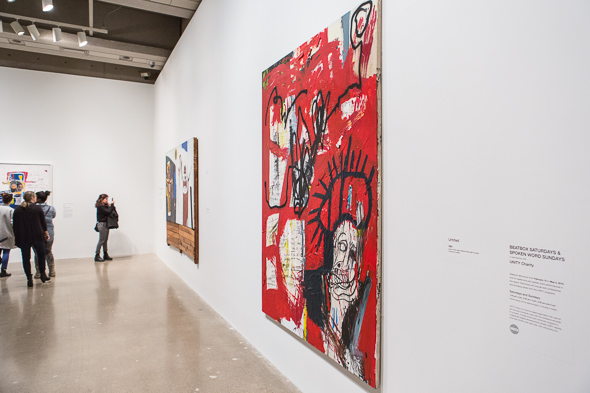 Instantly impressive are Basquiat's tactile expressions: beyond the bold greasepaint scrawls he's best known for, many works are not traditional paintings but loose canvas affixed to rough wood frames or paintings that incorporate metal, collage elements like comics book pages into non-traditional compositions, echoing the artist's roots as a graffiti artist. 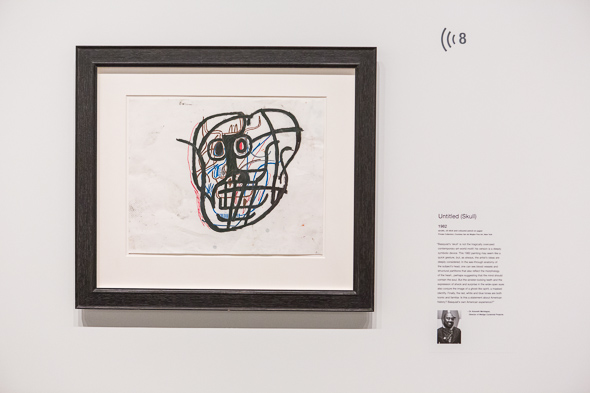 Large canvases, where Basquiat is at his most recognizable, are well balanced throughout the show, yet small works such as minimalist pastel drawings, some never shown publicly before, are positioned so that they're able to speak to viewers as clearly as the most violently saturated large scale paintings. It's a victory for fans as much as for the show's curators. 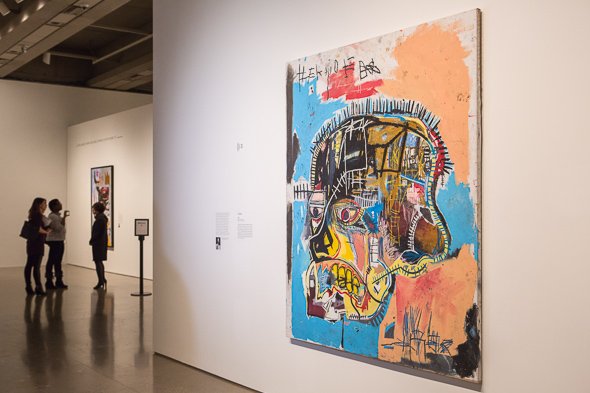 At his best, Basquiat incites a physical reaction through highly intelligent wordplay and his direct expression through each medium he uses - from nearly all red or black canvases to 1981's iconic "Untitled" picturing a skull of exposed bones and teeth, to subtler, less known canvases and drawings. The power in the canvases can leave one both physically dizzy and inspire the desire to experience a life-force similar to the one Basquiat channeled in his work. Few can be so close to living our truths. 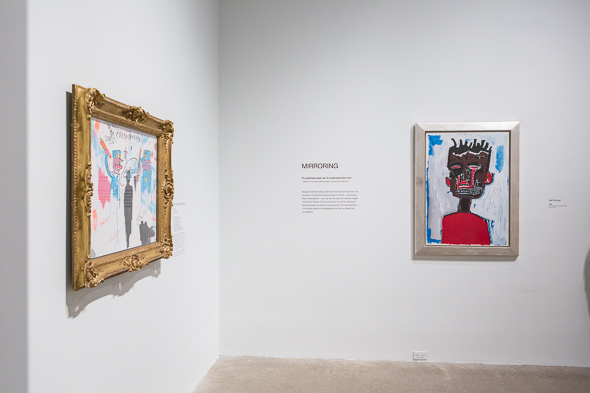 Basquiat was deeply disturbed by social justice issues from police brutality to the lack of black figures in fine art, which the show captures well in his tributes to heros like black athletes and jazz musicians and in directly political works like "Irony of a Negro Policeman" and Basquiat's reactions to the death of grafitti artist Michael Stewart at the hands of NYC police officers. "Oh fuck," one thinks, "I should act" - and then "oh fuck," again.

Basquiat never shied away from the complexities capitalist ideology, and it's a lot to be confronted with. You can feel the artist watching your discomfort while nodding. There are no easy answers offered. 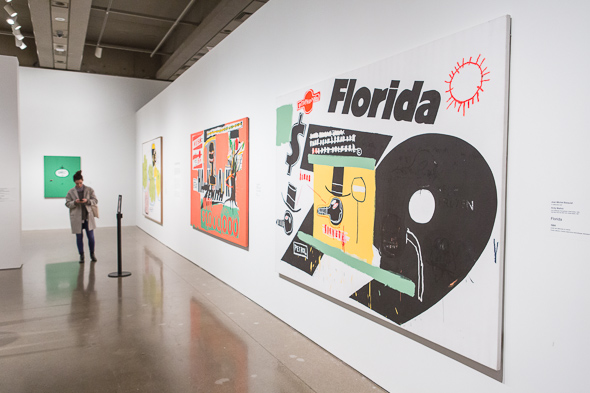 Famed collaborations with Warhol are, predictably, interesting in their historical context but least impressive artistically. Jay Z lyrics and poetry mounted next to certain works are a fit. I'm unsure if an audio installation drilling King proclaiming in speech, "Now is the time" over one section of the show is necessary, valuable, or carries any meaning besides unwarranted catharsis for viewers. It's perhaps a dangerous installation that threatens to simplify Basquiat's mastery and voice. 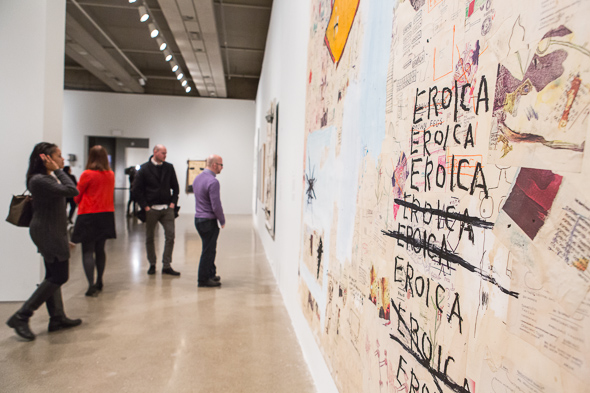 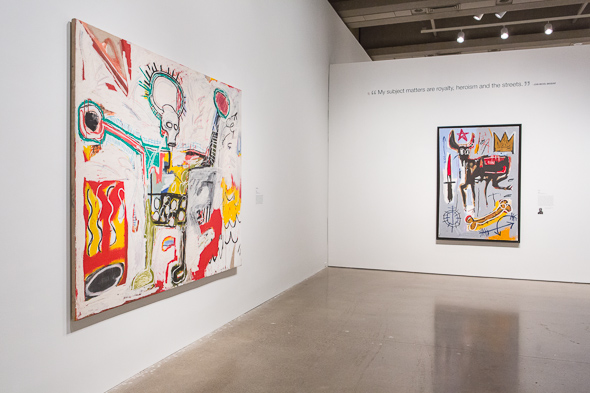 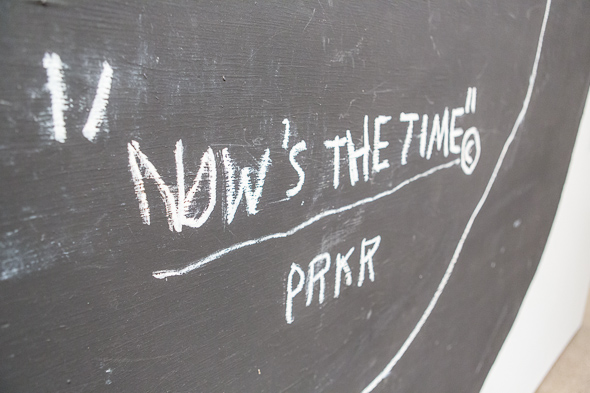 Can Basquiat's voice instigate the invention of a cure for the sick culture he diagnosed? It hasn't thus far. Basquiat, a writer on the wall, would be pleased to see discussions of race and class inspired by his work in the uptight nation of Canada, but one knows his response would be coloured by skepticism. It's easy to let Basquiat speak, but more challenging to listen. 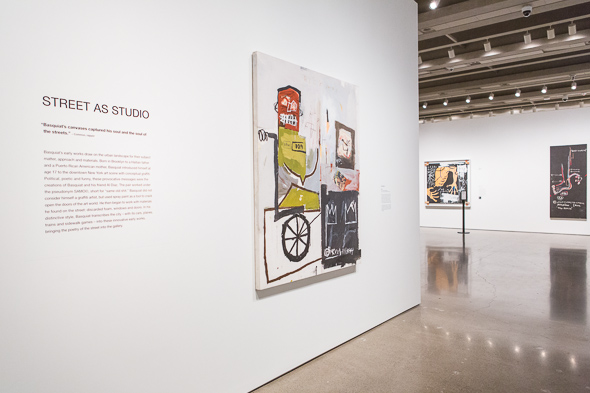 Jean-Michel Basquiat's Now's the Time is at the AGO February 7 - May 10 2015. Some of the events admittedly look cool too.

An earlier version of this article stated Russian has no present tense. A Russian translator has since explained to us that the young woman who told me this fact in Moscow was grossly simplifying. We apologize for the poetic but inaccurate error and to the Russians and linguists who were offended.