Starting this weekend, you're going to see a lot of Douglas Coupland around Toronto. Famous around the world for his literary works and cultural critiques, he has for the past 20 years also had a successful career as a visual artist. You may already recognize his sculptures peppered throughout city parks, condo complexes, and shopping malls.

The show everywhere is anywhere is anything is everything takes over spaces at both the Royal Ontario Museum and Museum of Contemporary Canadian Art and hopes to dazzle viewers with all sorts of glossy, kitsch offerings from Coupland's pop cult-drunk imagination. 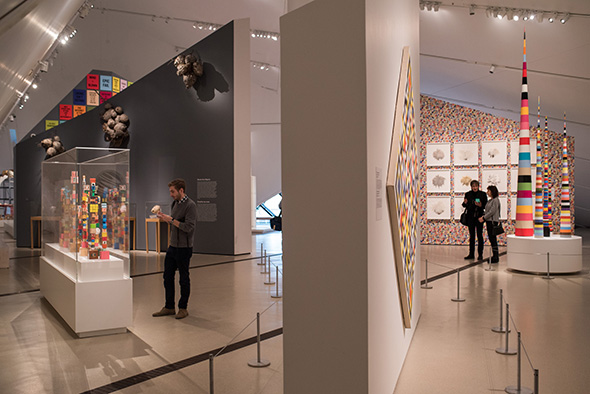 Less a retrospective than a selection of works and collected items presented as artefacts, Coupland makes pop art for the 21st century audience. Presenting material in a glamorous, easily digestible format that explores subjects ranging from Osama bin Laden to airline logos to Instagram, this is a show that will win new fans of contemporary art and irk some already established art lovers. 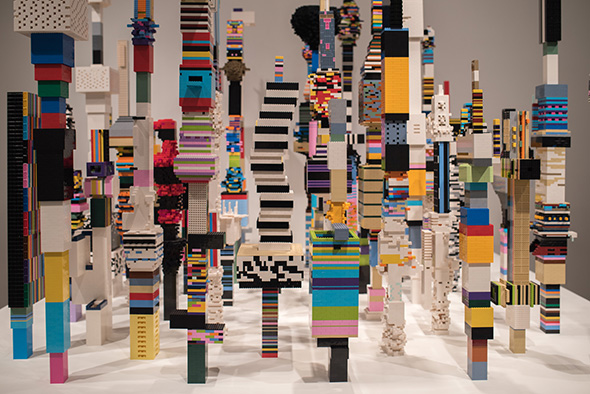 There are pieces here that will either touch your heart or strike a nerve, but the underlying sense is that Coupland wants them to be relatable. Viewers who are already familiar with pop art may find the look of the work quite dated and derivative. And even as the work isn't groundbreaking nor entirely original in its execution, it certainly is eye-catching and cleverly packaged with current sensibilities taken into consideration. 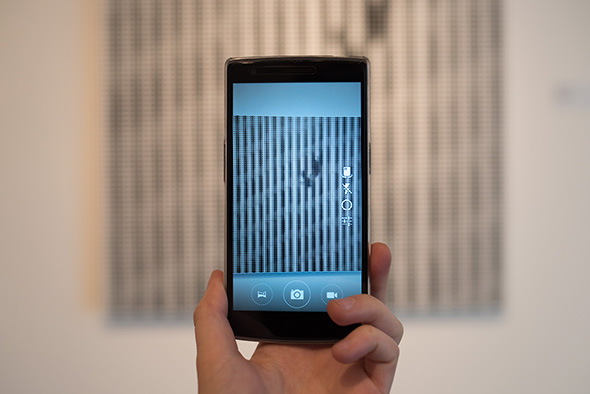 Some works lure you in like quiet storms, revealing their meaning with more subtlety than the more conspicuous pieces. His painting The Poet (2013) is only clearly visible after being digitally photographed, which then reveals a reproduced still from footage of someone jumping off the World Trade Centre on 9/11. With a measure of sensitivity, he allows the viewer to see the complete image or not.

Even more subtle and complex in meaning are the works Girlfriend in a Coma (2005) and Generation X (2005), which are chewed-up pages of the namesake books reformed as nests. They're accompanied on the same wall by actual groups of hornet's nests, entitled "Europe," "Middle East," and "Soviet Union" (2014). What he's talking about with these works is a little less obvious (an X-Files reference was mentioned by one viewer), and it feels much more personal than anything else in the exhibition. 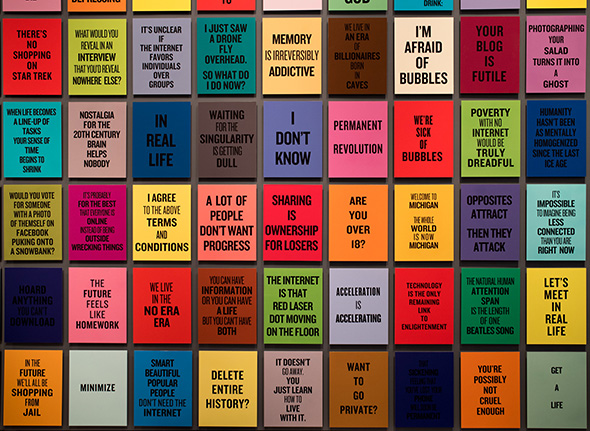 The colourful wall of memes entitled Slogans for the 21st Century (2011-2014) is like a sea of amusing tweets posted as writings on the wall. They aren't very deep, but that's precisely what Coupland is going for. The glamour of the banal and fleeting, items with pre-packaged meanings aching to be perverted, this is the world that the artist wants to explore. 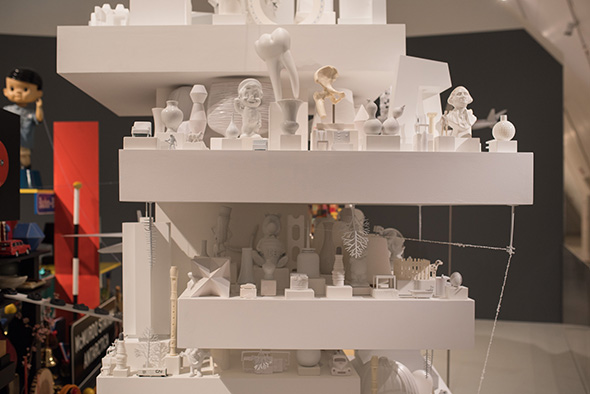 The massive hoard that makes up The Brain (2014) is arguably the culmination of such a fascination, overwhelming the viewer with over 5,000 objects arranged as a symbolic atlas of Coupland's brain. As a pleasing counterpart to this work, the neatly arranged shelves containing an array of parts from old construction sets and toy pieces in Brick Wall (2013) are beautiful musings on order, form, and colour. 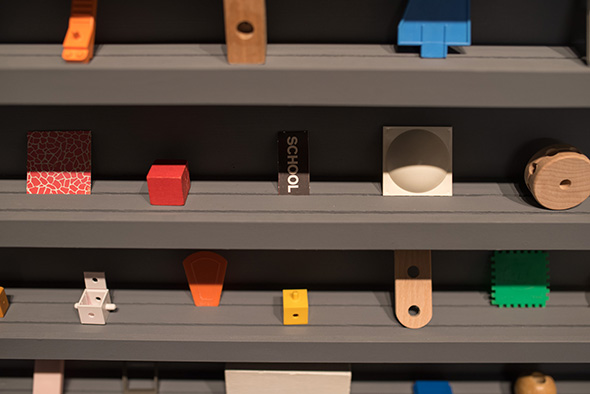 Coupland's urge to subvert reaches its peak with the work GUMHEAD, the one off-site piece located in the new Holt Renfrew Men's shop. Here you can stick gum all over his 7 foot head and recapture that adolescent thrill of bad behaviour, literally 'sticking it' to the man. Perhaps attitudes towards the work will change over the months, as the smell may make the retail experience a little more pungent. 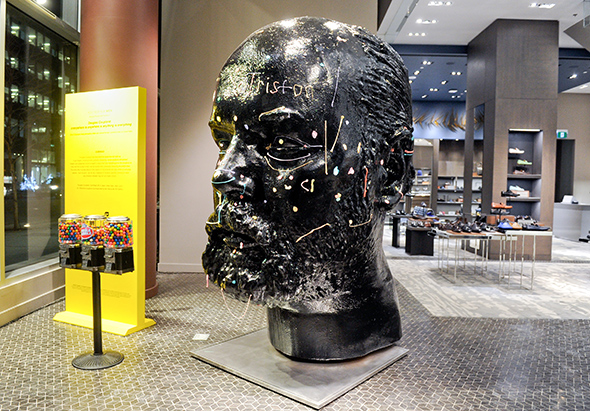 The most demanding task thrust upon the viewer through this entire show, however, is the effort he or she has to make to see it. The venues holding the exhibition are about an hour's walk apart. Many will be left to decide whether to see one or the other, and arguably the show is best seen in its entirety. 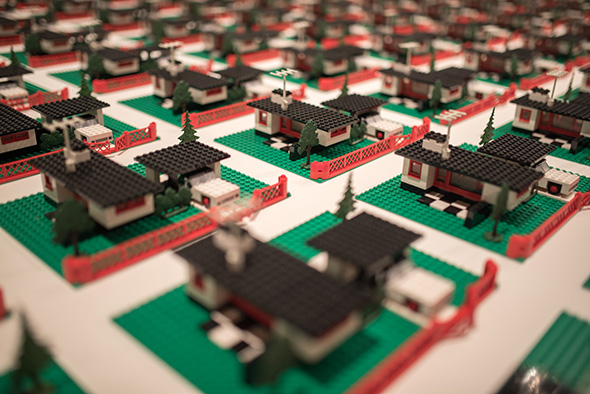 If one wants to take in even more Coupland, there's also an exhibition at 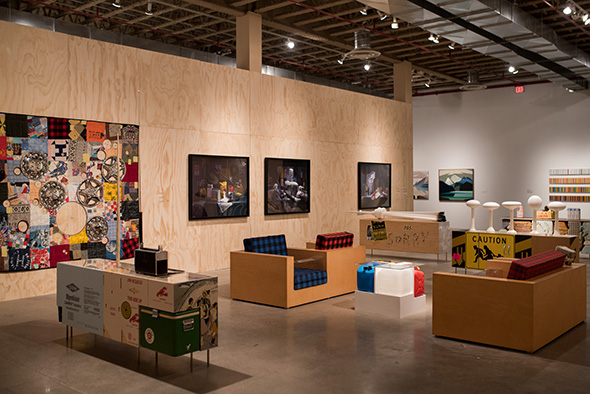 Daniel Faria Gallery, on now until March 21. While it is rare to devote two venues to a single artist at the same time in Toronto, the sharing of one exhibition within these two different venues presents great possibilities for shows of similar scale in the future.
Everywhere is anywhere is anything is everything is on at the ROM from January 31 to April 26 and at MOCCA until April 19. GUMHEAD will be on display at Holt Renfrew until March 9.