The top artists to watch in Toronto made an impression in 2014, whether at exhibitions across the city or afar, or through award wins and performances. Some are just emerging into the gallery scene while others are preparing for AGO events (or painting massive murals on Queen West), but savvy collectors, gallerists, and fans of visual arts from paintings, photography, and illustration to sculpture, installation, and performance will be keeping their eyes on these talented Toronto artists this year.

Here are my picks for ten Toronto artists whose work can keep you going in 2015.

Jesse Harris
If the artist behind the "You've Changed" mural on Queen West isn't on your radar yet, let him be in 2015. His cartoon work was exhibited at NADA Miami Beach in 2014, and he's part of Dundas West gallery Cooper Cole's current exhibition. Catch his CC solo show later in 2015. 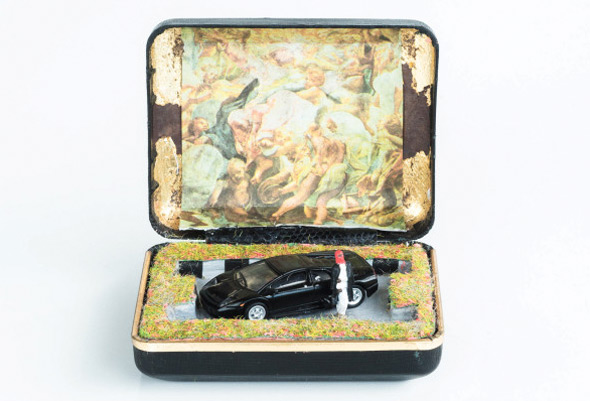 TALWST
TALWST (nĂŠ Curtis Santiago) led a Basquiat inspired dance procession through Art Toronto's fancy gala this year that was audible even above the glasses clinking and cheques being signed. The artist, community organizer, and rap/r&b musician (he's collabed with Illangelo) crafts astounding dioramas in tiny jewelry boxes, and will be Artistic Director for the AGO's Massive Party 11 on April 23. 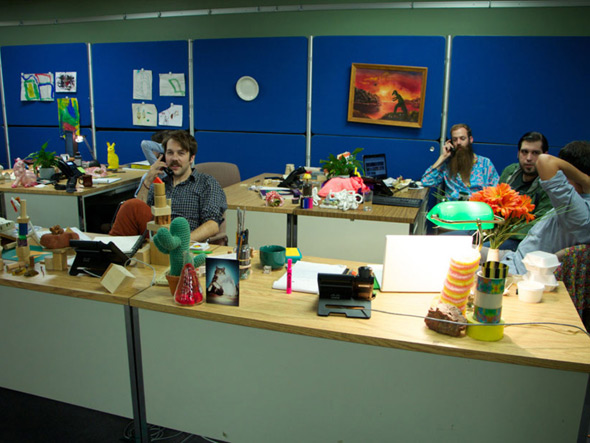 VSVSVS
Remember how much better Nuit Blanche was in 2013 thanks to that "1-855 Is it Art?" helpline number? That was a VSVSVS initiative (bring it back, please). You'll be able to catch the fun-loving seven member (Anthony Cooper, James Gardner, Laura Simon, Miles Stemp, Ryan Clayton, Stephen McLeod, and Wallis Cheung) artist-run centre exhibiting at Mercer Union in early summer 2015. 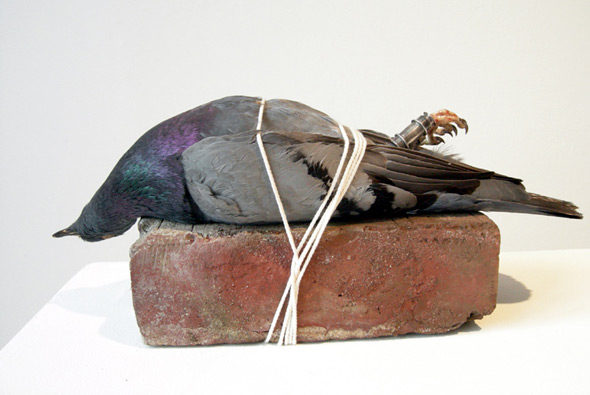 Abbas Ahkavan
Tehran born multi disciplinary artist Abbas Ahkavan's intriguing "site-specific ephemeral installations" are a wonder to behold. The New York Times has published his take on gardening - "Gardening is a discriminatory act... where the gardener decides what lives and what dies" - and he gets to say he has gallery representation in Dubai. Ahkavan's 2015 solo show at Mercer Union will be a must-hit. 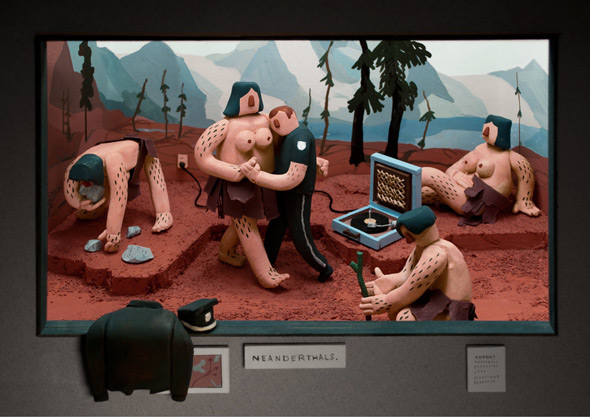 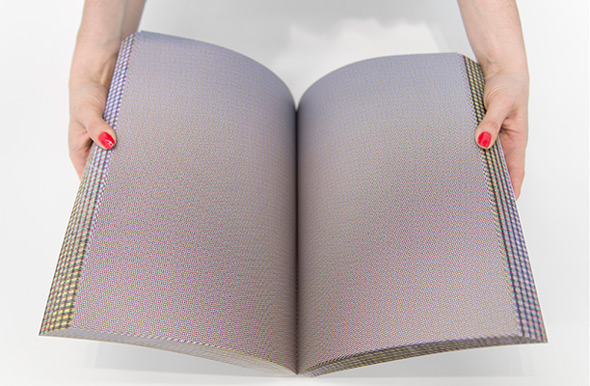 Jennifer Rose Sciarrino
2014 saw digitally minded artist Jennifer Rose Sciarrino's Patterned Recognition solo exhibition at Daniel Faria Gallery, as well as appearances at the NY Art Book Fair and NADA New York. If you're a fan of psychedelic small-run fine art books, check out her 2015 - 06 - 21 - 2024 - 06 - 21 publication, available now through Art Metropole. The phenomenally beautiful work "charts the movement of the sun on the longest day of the year, June 21st, in Toronto, Canada, from the years 2015 to 2025." 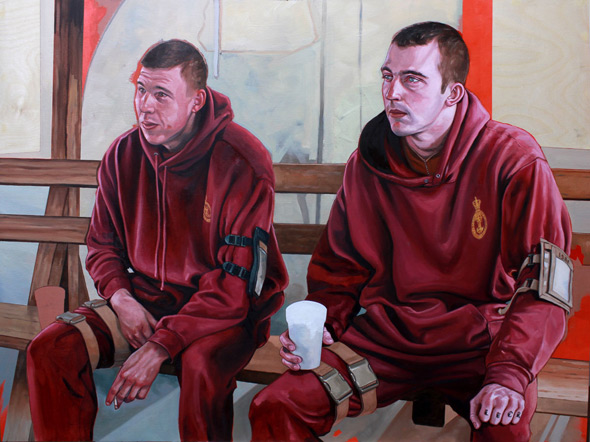 Scott Waters
When he isn't titling paintings with Weakerthans or Le Tigre lyrics or drawing birds and cats, Scott Waters is obsessed with the military. The artist's backwoods-masculine voice was a memorable find at Art Toronto, and he's represented by LE Gallery. 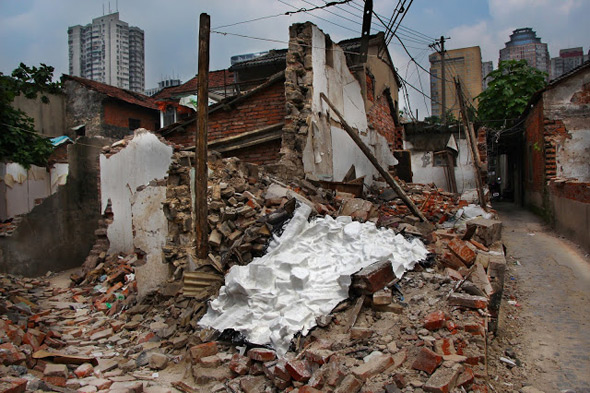 Ash Moniz
Winner of the 2014 student Sculpture Award from the Sculptors Society of Canada, 2014 saw Moniz exhibit at Toronto's Birch Contemporary as well as in Nanjing, China, where he recently lived. Canadian Art spotted him in 2013 with Pari Nadimi Gallery's Art Toronto exhibition of his Plaster Bandages on Rubble works, and the artist has also been busy carrying 10kg in measuring weights as a carry-on through customs. 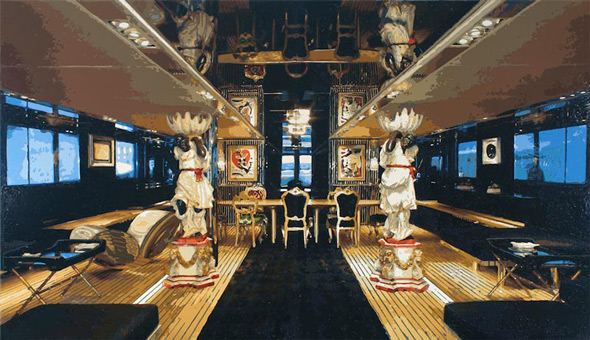 Dorian Fitzgerald
Garish and, at first, tasteless, Dorian Fitzgerald's massive paintings of excess have just enough of an edge to make them seem subversive hanging in some rich collector's condo (maybe yours?), and there's something about this that appeals to my ever-hungry cynicism. See him in 2015 at, of course, Clint Roenisch. 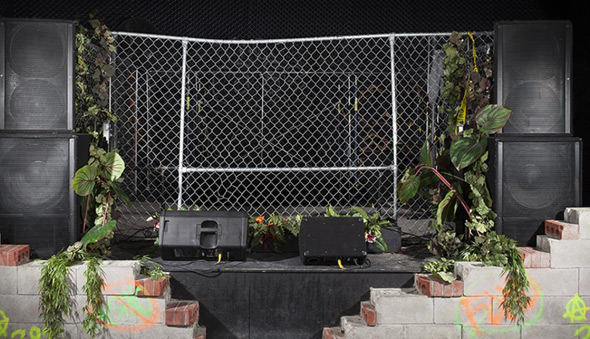 Danika Zandboer
Recent photo grad from OCAD U (and a stand out from their grad show), Danika Zandboer's We Are Monoliths show on heavy metal themes at Gallery 44 caught the attention of critics, music fans, and photography lovers this summer. Whether she keeps fixing her lens on subcultures or follows her interest elsewhere, Zandboer's eye is one to watch. 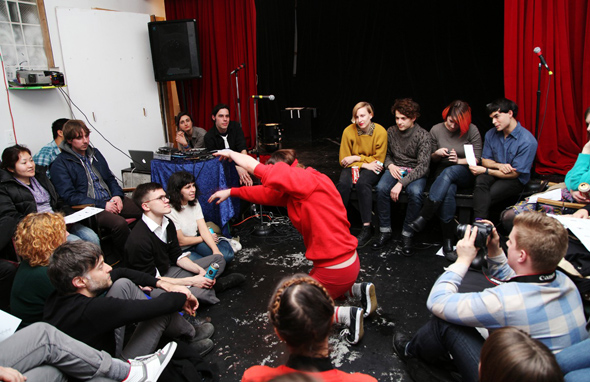 Life of a Craphead
Performance art venue Double Double Land, co-run by Toronto artist Jon McCurley and home to McCurley and Amy Lam's monthly Doored shows/broadcasts, just turned five. Their Life of a Craphead project has already performed at the AGO, but they're due for a brighter hit of the spotlight this year - especially since in early 2015 they'll finally release their long awaited feature film Bugs.

Who did we miss? Tell us what Toronto artists you're excited about in the comments.

Images: Abbas Ahkavan's Correspondences via his website; TALWST's The Apotheosis of Kanye West via Modern Toronto; Dorian Fitzgerald's The Dining Room of The Regina d'Italia (Stefano Gabbana's Yacht), (2008) acrylic and caulking on canvas mounted to board, 78 Ă 156 inches via clintroenisch.com; Jennifer Rose Sciarrino's 2015 - 06 - 21 - 2024 - 06 - 21 via her website; VS VS VS's 1-855 IS IT ART via their website; Jesse Harris' You've Changed mural via Juxtapoz/Cooper Cole; Danica Zandboer's We Are Monoliths via Gallery 44; Hudson Christie scene from Work-Life Balance via his website; Ash Moniz's "Plaster Bandages on Rubble (Nanjing, China)", photograph of installation, size variable, Pari Nadimi Gallery, Toronto, Canada, 2013 via his blog; Scott Waters painting via his tumblr; Doored photo by Yuula Benivolski.