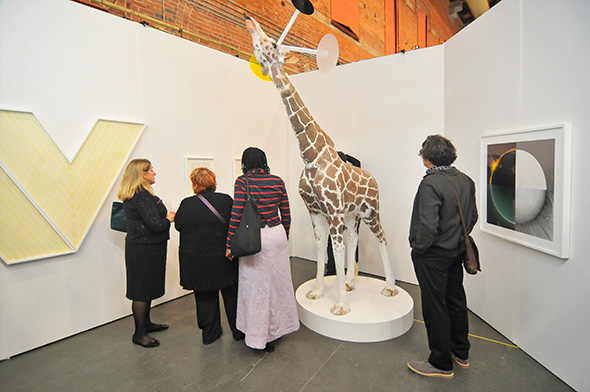 To participate in the small fair at the Joey & Toby Tanenbaum Opera Centre, galleries pitched only three artists each, but not specific works. The room was dominated by Montreal and Toronto galleries, with a handful of Vancouver and Ottawa names tucked in between. It might disappoint anyone looking for bloody rivalries to note that four galleries at Feature will also show at Art Toronto. 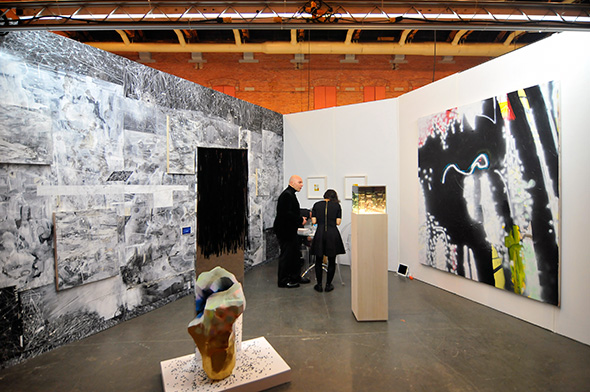 While not everyone who paid gala prices ($150) to attend Feature's opening VIP event were happy - though I'd imagine there is always talk of collectors storming out after an initial walk through - other buyers were at home enough in the new environment to pull out their chequebooks. Near the end of the night little red stickers denoted sales in the $1000 and $20,000 range; Vancouver's Owen Kydd sold the same $12,000 video several times over. 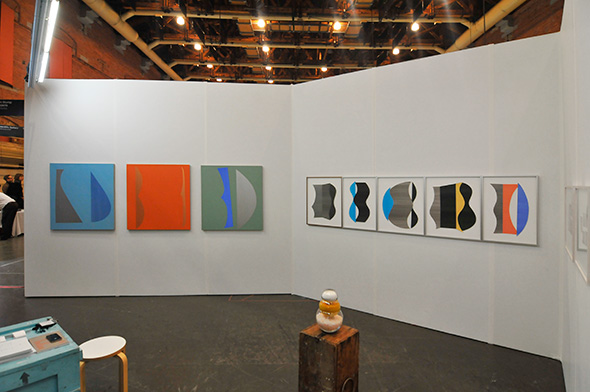 Names like Gilles Mihalcean and Liz Magor will interest collectors and art fans alike, but the latter be warned: Feature's focus on the contemporary explicitly drives home the fact that the purpose of an art fair is to sell, not to astound, perplex, or drive new understanding of life's complexities into the heart of the viewer. Each gallery's intention, from selection of artists and pieces to their booth's arrangement, is that of a marketer, and Feature's fierce curation works against it here. 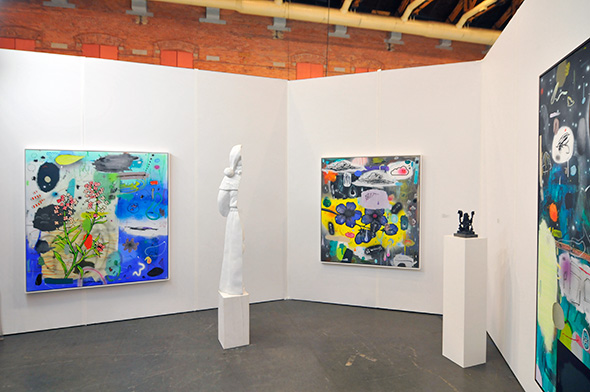 A stall installation is not an exhibition, and if you're unfamiliar with the work on hand, it's easy to feel you've wandered into a high end gift shop where any bold colour or risky creative endeavour is lost in a palette of muted tones and bright whites. Ulysses Castellanos's understated black-outs over magazine clippings don't work in a consumer setting, and worse, bring on the wrong kind of discomfort - a suspicion of the creative process. Without context, other pieces are only as good as the name behind them or a gallerist's sales pitch. 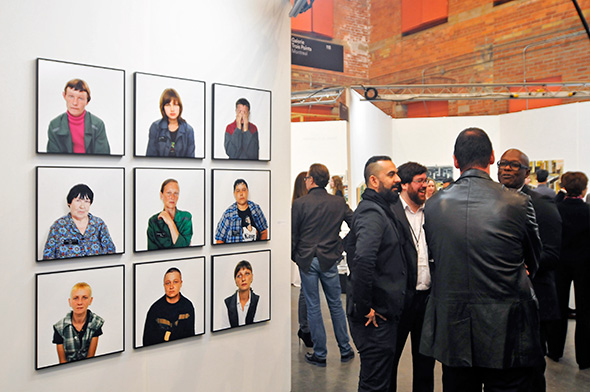 With any luck the contextual disservice done to the art works will be balanced by money changing hands, but for tourists it's hard not to wonder at, instead of an sculptor's intent, what a small sculpture would look like on a side table, or where a buyer might chose to install a large, awkwardly shaped one in their home: mysteries of life best pondered out of earshot. Plan Feature, just down the street from Toronto's goliath fair, as a calming chaser after the chaos of Art Toronto.

Feature Art Fair is up at the Canadian Opera Company, Joey & Toby Tanenbaum Opera Centre (227 Front Street East) until Sunday, October 26. General admission is $15. Hours and exhibitors can be found on Feature's website.