When it's at its best, comedy functions as a means of correcting socially disruptive behaviour. Playwrights accomplish the task by placing the perpetrator under the microscope and employing ridicule and humiliation to reflect and eventually correct the social ill. Our comic masters--Aristophanes, Moliere, Shakespeare--all knew the game and how it best plays out, albeit with fictional characters as stand-ins for their real-world counterparts.

It's a challenge then for any artist to approach the forever twisting and turning narrative of Rob Ford, the larger-than-life Toronto mayor whose list of social ills would make Tartuffe blush. But this hasn't stopped our city's scribes and players from trying. Rob Ford: The Musical joins at least three other productions, Rob Ford: The Opera, Dreaming of Rob Ford, and the currently running Ubu Mayor, which consider the dramatic potential of the city's chief officer.

And lest we forget that the real-world drama is still so fresh--the ink not yet dry, the smoke still lingering--and that the saddest chapter yet is a hospital cancer fight, awakening us from our own media stupor. This is all to say, the stakes couldn't be higher.

In approaching the subject, writer Brett McCaig, composer Anthony Bastianon and director Liz Gilroy employ an overtly comic trope -- that of the guardian being who accompanies and narrates the protagonist through past events, ultimately guiding them towards a better future.

In this version, Ford (Sheldon Bergstrom) is Ebenezer Scrooge like, not a bad comparison given their mutual disdain for hand outs and gravy. He is shepherded by Transgression (Andrew Broderick), a transgendered angel hoping to earn her C-cups. The media and city officials (played by Sheldon Davis, Daniel Greenberg, and Marisa McIntyre) join Margaret Atwood (Lisa Horner) and Doug Ford (Justin Bott) as the various players that make up the social drama. 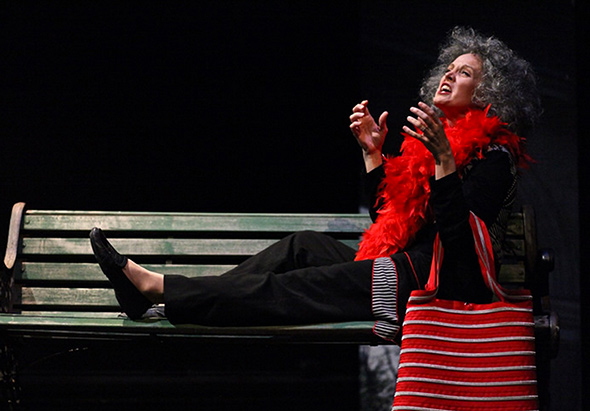 As entertaining as some of the material may be, it plays out as conventional in structure and in tone as you'd expect. There are flashes of a potential fresh take. One song in particular builds towards a deeper and more gentle understanding of the mayor only to be undercut by low-hanging video footage fruit. This is musical schadenfreude, plain and simple.

McCaig attempts to present a balanced approach by implying that all those involved, especially the media and city officials, are complicit in feeding the Ford shitstorm. Transgression is an unlikely Ford ally, given the mayor's uncomfortableness with the queer community, but she serves as an important sounding board that helps to make him more human.

For all the effort that goes into crafting the Ford narrative, the most memorable character is Atwood, played to the hilt by Horner. Her performance emphasizes the absurdity of how a revered figure like Atwood could ever be caught up in such an unbelievable tale. Horner also has the most poignant song, an anthem decrying the end of art, which could have been delivered from leftist living rooms across the city.

Bergstrom is a gifted performer who wears the big man's suit well. He channels Ford's childlike "aw shucks" spirit, a quality which confounds critics but at the same time radiates vulnerability.

Rob Ford: The Musical is yet another merry-go-round the collective laugh track in an attempt to fill the void of the man's dark shadow.

Rob Ford: The Musical, written by Brett McCaig with music by Anthony Bastianon and direction from Liz Gilroy, runs at the Factory Theatre until September 28.

Photos by Carmen B Photography