An Enemy of the People hits the stage at Tarragon

The works of the early modern playwrights--Henrik Ibsen, Anton Chekhov, and August Strindberg--continue to be produced because they model the qualities of the well-made play. Sometimes, albeit that rare sometimes, adaptations of these staples take flight with a slight shift in perspective, connecting the hundred year-old tale with themes that resonate today.

Florian Borchmeyer's updating of Ibsen's An Enemy of the People, originally presented at the Schaub端hne Theatre under direction from Thomas Ostermeier, is an exceptional adaptation. This is one of the freshest treatments of a modern dramatist I've ever seen. So infused with present day relevance is this new production that members of the audience are encouraged to offer feedback during the play's climactic scene (more on that later).

Dr. Stockmann (Joe Cobden) makes a horrifying discovery that the town's baths have been poisoned by industrial waste. Alongside his wife Katharina (Tamara Podemski), Stockmann attempts to navigate the most appropriate course of action but is met with resistance from the town's power structures -- Hovstad (Matthew Edison) and Billing (Brandon McGibbon) at the newspaper, Aslaksen (Tom Barnett) the printer, and his most stringent oppressor, his brother and city councillor, Peter (Rick Roberts). 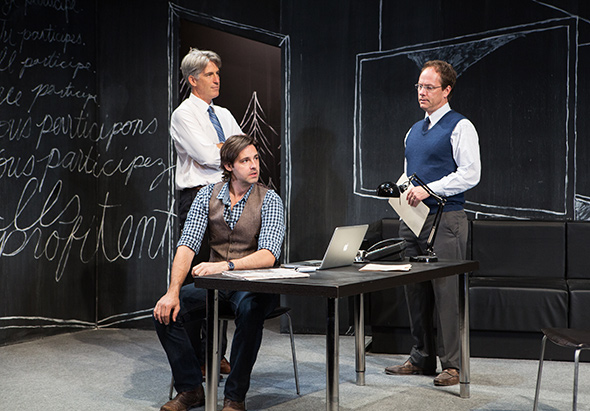 Borchmeyer's contemporary adaptation includes all of the political jockeying of Ibsen's original but in the context of our 21st century challenges: environmental concerns, technological isolation, the will of the liberal majority, ineffectual public officers, and the firm grip of capitalism. Stockmann and Katharina here are hip, young parents who jam with friends as part of a makeshift band. David Bowie's Changes surfaces again and again -- a not so subtle nod to the tension in the air.

The dialogue is so precise and exacting that the play's 105 minutes feels more like an hour. The reason is that there's so much incredible conflict at play, fueled by each character's investment in personal survival.

The conflict is meant to spill over into the audience. A debate over the veracity of Stockmann's report comes to a head at a dramatic town hall, where the audience is cast as the citizens. His damning manifesto, delivered with clear resolve by Cobden, encourages audience members to join the debate. It produces mixed results. While it's an electric moment to have the 4th wall so violently broken (during Ibsen no less), the more it plays out the more awkward things feel. It's an inspired choice but likely too difficult to give nuance to in performance. 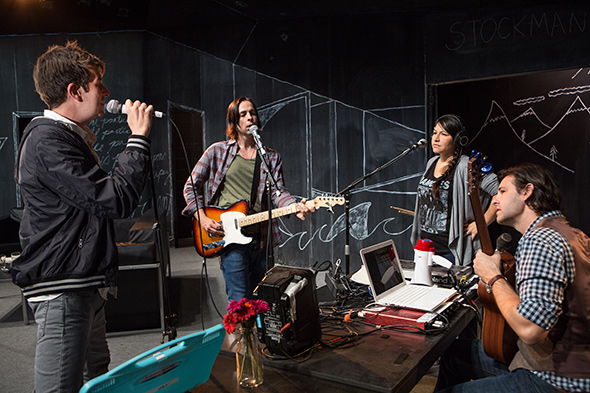 Richard Rose for his part acknowledges his debt to Ostermeier's concept. The staging is slick. There are engaging scene transitions and a chalkboard mis en scene that creates the right mood on Michelle Tracey's set. The most striking image is the literal whitewashing of the stage that paints Stockmann into a corner and makes visible the behind-the-scenes cover-up.

The familial sparing between Cobden and Roberts is outstanding. Both performers convey how high the stakes are for the characters and the town. Roberts also accomplishes the supremely challenging feat of making us understand Peter's point-of-view. Barnett contributes a smarmy and often comical caricature of a small man in a powerful position.

This Ibsen adaptation feels like it was written this year. And you can't ask for more than that from a treatment of a turn-of-the-century drama.

An Enemy of the People, written by Henrik Ibsen, adapted by Florian Borchmeyer and directed by Richard Rose, runs at the Tarragon Theatre until October 26.