It was only a matter of time before innovative Toronto artists sought new and exciting venues - outside of churches, heritage spaces, and parks - to present the best of independent theatre. Abandoned stores throughout the city have been taken over by creators seeking a home to call their own. These spaces operate as pop-up shops, not for clothes or the latest food trend, but for the presentation of cultural enrichment.

Just over a year ago, Red One Theatre Collective turned an abandoned store at the corner of Bloor and Delaware into the Storefront Theare, a multi-disciplinary, community hub for independent theatre and performance. It joins venues like Videofag (Kensington Market), the Sterling Studio Theatre (Junction Triangle), and SideMart's Theatrical Grocery (Leslieville) that have been re-purposed as intimate performance spaces.

Red One set to work in early 2013, transforming the space - which was once home to a Guardian pharmacy as well as a liquor store - into an 80-seat theatre venue. It's inspiring to see companies like Red One invest their own capital into repairs and retrofitting in order to outfit a space for live performance. The group removed a drop ceiling, installed a lighting grid, constructed risers, and updated the washroom facilities.

"We hope that the Storefront Theatre can flourish into a viable market place for young artists to begin generating revenue from their work and therefore create solid foot holds towards the launch of their careers as professionals," says Benjamin Blais, general manager and artistic director of Red One.

Blais and his team are working towards establishing the theatre as a "premier venue in which to experience the hottest new Toronto indie theatre and artworks," all while fitting into the Bloorcourt neighbourhood. 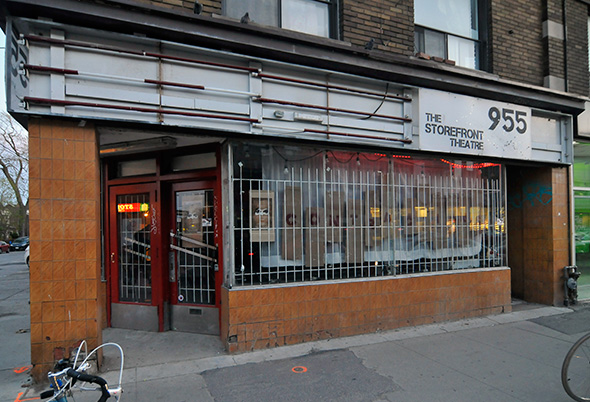 Red One plans to present three to four productions at Storefront each year. Past plays include After Miss Julie, SHREW, and Wait Until Dark. The rest of the year, the venue plays host to a collection of independent theatre companies, including Circlesnake Productions and Kat Sandler's Theatre Brouhaha, and is also a participating venue in the Playwright Project.

The theatre is also known to host a barnburner of a party, as shown by the conversion of the space into a disco-dance-roller-skate-rink last May, as well as current plans for a hot lava tag competition.

After February flooding damaged the venue's equipment, the theatre bounced back to true form thanks to the strength of its community. On the docket in the next few months is Mike Bartlett's Contractions from Red One (currently on until May 25), Sandler's COCKFIGHT, and the unveiling of a building mural in June, presented in collaboration with local graffiti artists and the Christie Pits youth program.

The Storefront Theatre is a beacon for Toronto's indie theatre scene. Its model for collaboration and community building, alongside other vibrant independent companies, is transforming the city's theatre landscape one storefront at a time.