Must-see art shows in Toronto this spring might pose a bit of a challenge to you, oh lover of patios, cold brews, and park hangs - but the weather is finally fine, and it's time to do a little spring cleaning inside your retinas, and, dare I say, focus your mind on something other than your frantic list of reasons to wait until April before giving up on life forever. Not that you made that list. Eat the list. Read this list instead, and try to hit as many of these killer shows as you can. Want more? There's also a bus tour of public art works on Sunday, April 27: learn more and reserve your seat here.

Here are 10 art shows you'd regret missing this spring if you were already dead. 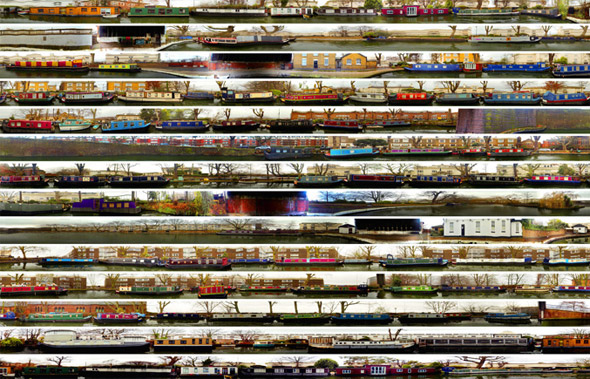 Michael Awad - The Entire City Project 2014
On now at Nicholas Metivier Gallery is Michael Awad's solo photo exhibition focused on Toronto, captured through the "hybridized cinematic cameras" he crafted himself and strapped to his vehicle. The results are DIY time lapse stills of the city. It's a unique concept that's turned into an admirable success story, the latest results of which you can see now. You have until April 19 to catch up on the project.

Eva Koťátková
Czech artist Eva Kotátková's first solo exhibition in Canada begins at Scrap Metal Gallery this Thursday. Working with drawing, collage, installation, sculpture, and performance, Kotátková builds strange and playful objects, and interacts with them (that's a shot of her work in the image at the top of this post). The show runs from April 3 to June 28. 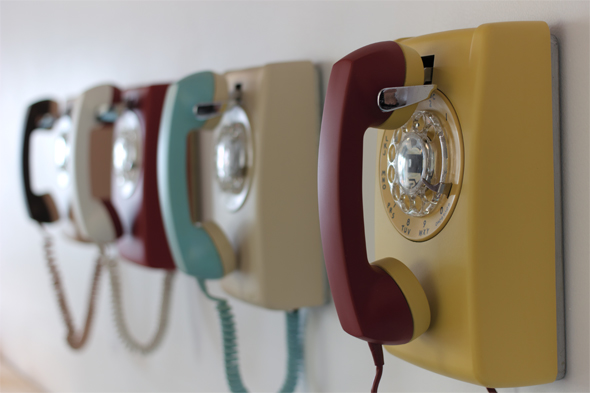 Max Lupo - Objects of Note
This month at VERSO Gallery Max Lupo is obsessed with the power of objects like vintage telephones (check it out), typewriters, and strange inventions that are hard to put a name on right away. Do objects have healing powers? Can they react to their users? Do they contain ironic elements and are they laughing at us, or with us? The exhibit is up from April 5 - 27. Performances will happen Saturday April 5 from 4-6 pm, Saturday, April 12 from 1-4pm, and Sunday, April 27 from 1-4pm.

Scott Conarroe - China
This week at Stephen Bulger Gallery you can take in some phenomenal looking new work by Scott Conarroe, shot while he was in China (all the photogs are heading to China these days). If that isn't enough (and this lens has me addicted), check out some of his Rails series photos online. Gorgeous work. The exhibit is up from April 5 - May 3. 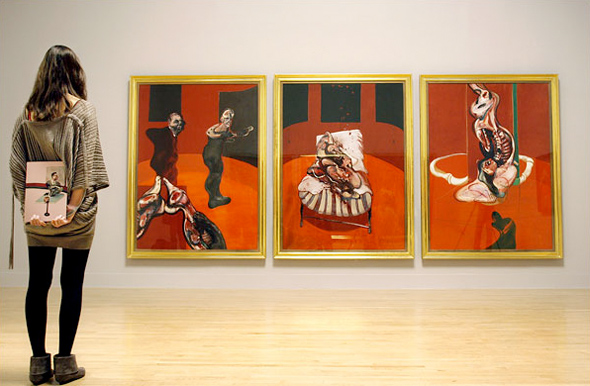 Francis Bacon / Henry Moore
The Art Gallery of Ontario will host a massive Francis Bacon and Henry Moore exhibition starting this weekend, featuring over 60 works by the two British artists, both major players in the postwar art scene exploring bleak existentialism and the distortion of reality and human form. While Moore's less brutalizing works will balance Bacon's dread, it'll still be dark for a spring show (take some Gravol before bed the night after this one). The show runs from April 5 - July 6. 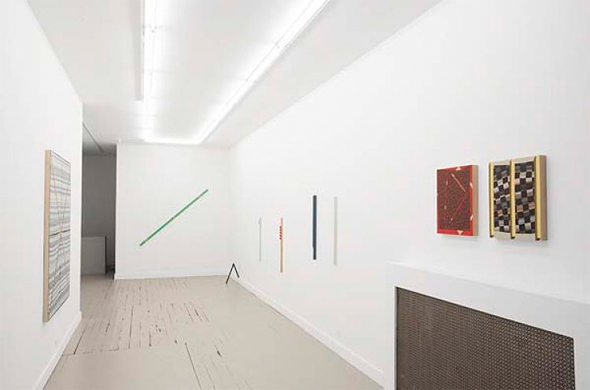 Vanessa Maltese
In Vanessa's Maltese's understated paintings and geometric sculptures, lines, patterns, colours, and architectural elements (this describes a lot of art, but bear with me) make for rare abstracts that are compelling to spend time with - just see it for yourself. Winner of the 2012 RBC Canadian Painting competition ($25,000!), her solo show at Cooper Cole runs from April 10 - May 10.

Glenn Priestley - Yonge Street
If you're a fan of our history posts, you won't want to miss this exhibit. Odon Wagner Contemporary will showcase Glenn Priestley's depictions of the changing face of Toronto's Yonge Street. You can preview some of the works online here. The opening is April 10th, and then you have until May 3rd to stop by. 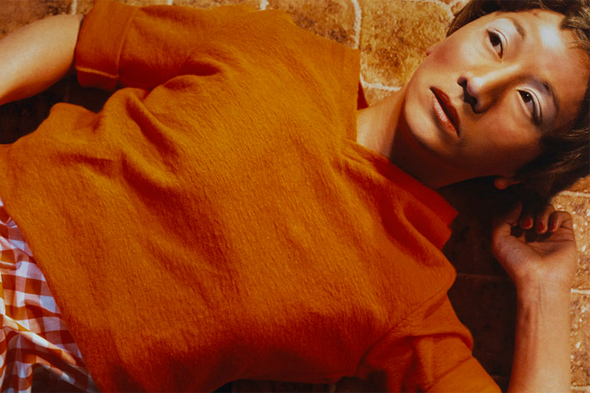 Contact
This year marks the 18th year of Contact, the largest photography festival in the world, where you can take in public installations showcasing the work of over 1,000 photographers in galleries and spaces across the city, plus attend films, lectures, and workshops. The fest launches May 2nd at MOCCA, who are presenting In Character: Self Portrait of the Artist as Another with works by Bill Burke, General Idea, Rafael Goldchain, Rodney Graham, Yasumasa Morimura, Shelley Niro, Cindy Sherman, and my personal favorite, Sophie Calle from May 1 - June 1. Look out for our full preview. 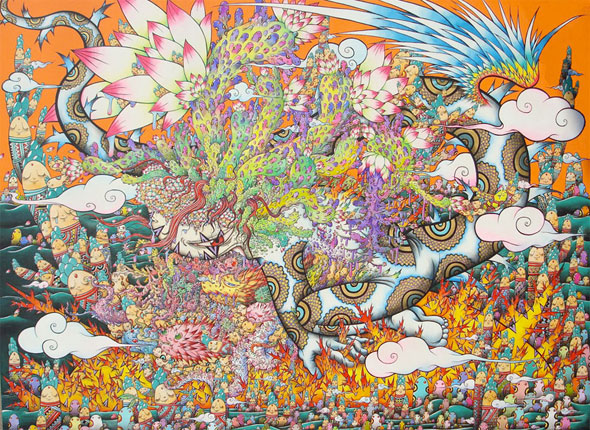 Mitsuo Kimura
Mitsuo Kimura was one of the artists who participated in the Sanko mural at Queen and Claremont. If you're a fan of psychedelic Toronto illustrator Alex Mackenzie, prepare to feast your eyes. Kimura's ultra detailed psychedelic paintings might just start the first rumblings of a seizure - and then you'll want more, naturally. Read an interview with Kimura in Juxtapoz here. His show at Le Gallery opens May 9th and runs until May 31 (don't miss the Tristram Lansdowne show opening June 6th, either). 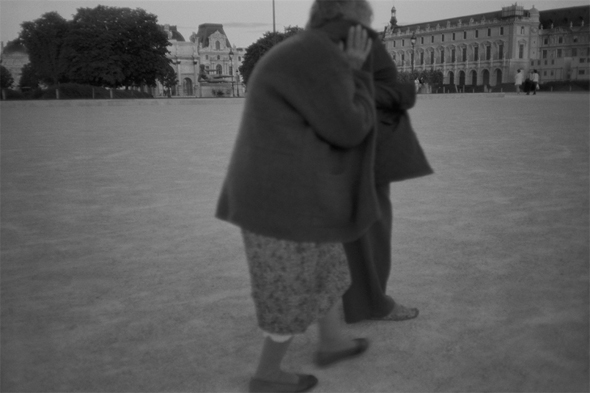 Angela Grauerholz
German born, Quebec based photographer Angela Grauerholz's ghostly black and white images make one think of the strained world of Béla Tarr. There's a sadness lurking in her landscapes, interiors, and portraits, but they're not without their comforting qualities, too. Her show at Olga Korper Gallery opens June 5 and is up until June 28. 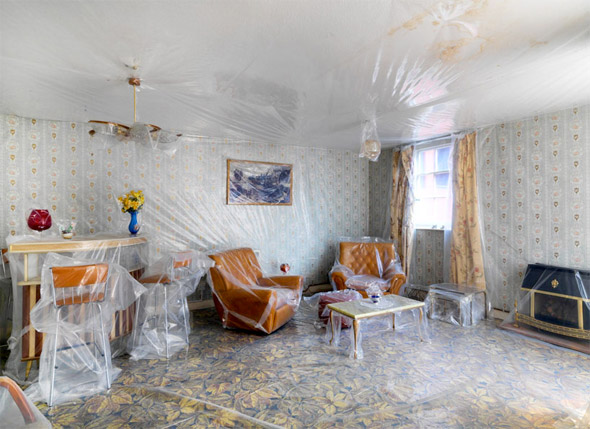 Communicating Vessels
Okay, one more -- especially since this one pulls us so far out of downtown. IAIN BAXTER&, Luis Jacob, Roula Partheniou and Judy Radul (three generations of Canadian artists working with familiar objects and defamiliarization) will show at Blackwood Gallery for one month this spring. If you're not able to get out to Mississauga, make this on your calendar: there's a free Contemporary Art Bus Tour April 27 from 12-5pm (more info here). The exhibition runs from April 16 - May 11.