Arts & Crafts most loyal artist isn't Kevin Drew or Brendan Canning but someone who's responsible for crafting the iconic images that are closely associated with the label. He's at shows, he's backstage and he's a friend to many of the musicians who got their start in the early days of A&C.

His name is Norman Wong and he's the label's preferred photographer. 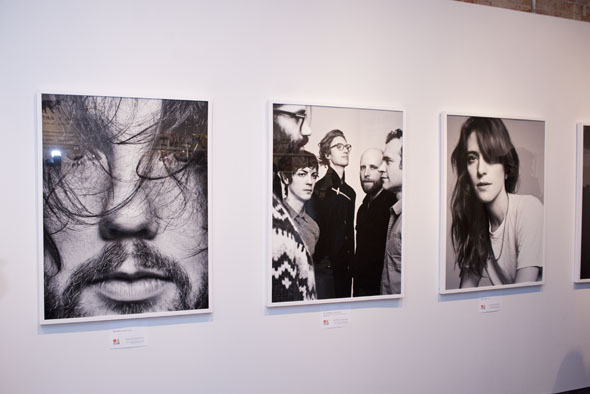 This man behind the lens is possibly the most trusted man in the Canadian music industry, responsible for capturing almost ten years of musicians' blood, sweat and backstage beers. This past Thursday evening, Wong opened his archives to the public in an exhibit titled Norman Wong x Arts & Crafts. 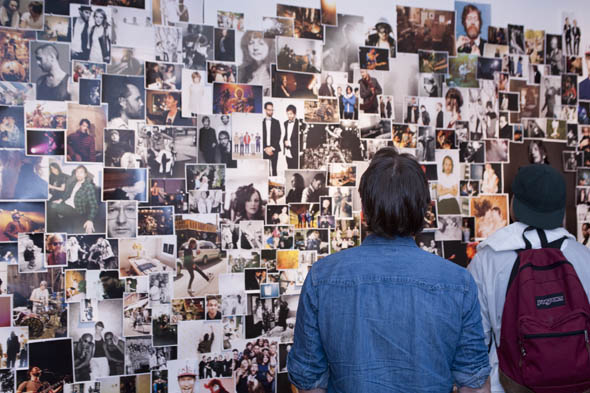 A retrospective that mixes portraiture with candids and prints with Polaroids, the show displays hundreds of images that Wong, a fashion and editorial photographer by profession, has taken of Arts & Crafts' musicians over the last eight years. 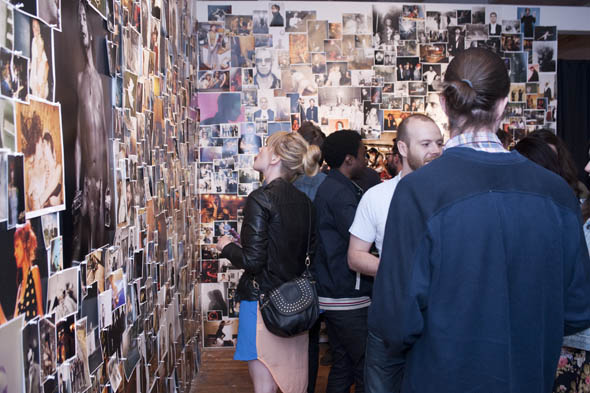 Presented by the label, which has been celebrating their 10-year anniversary since the clock ticked 2013, Arts & Crafts' relationship with him is evident in the sheer volume of pictures Wong had stored in his archives — what's on display could have easily produced several more exhibits. Building this kind of repertoire with the label was an opportunity, he says, that came to him because of Broken Social Scene, arguably the label's most famous alumni. 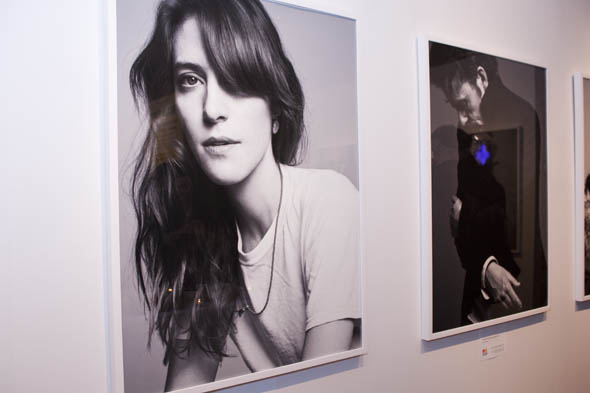 Working in film sales when he first picked up photography as a hobby, Wong credits his start to a girlfriend of Brendan Canning's. She was the one, Wong says, that suggested he shoot the BSS crew. But it was one image that began the project that ultimately became this exhibit currently on display at Field Trip Headquarters (1093 Queen Street West). 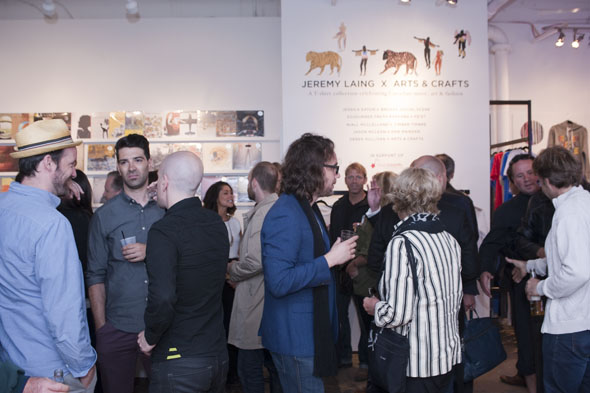 "That photo over there," he says pointing to an image of Andrew Whiteman, frontman of Apostle of Hustle, a band that released its first album, Folkloric Feel, on Arts & Crafts in 2004. Whiteman poses in a black blazer, hugging himself with his arms crossed, "That's the photo that started it all."

"It determined the aesthetic for the rest of the photos," he continues. "It was kind of like, okay, that lighting looks good and I like the portraits in black and white." A simple artist's statement, yes, but it neatly sums up this aspect of the show. 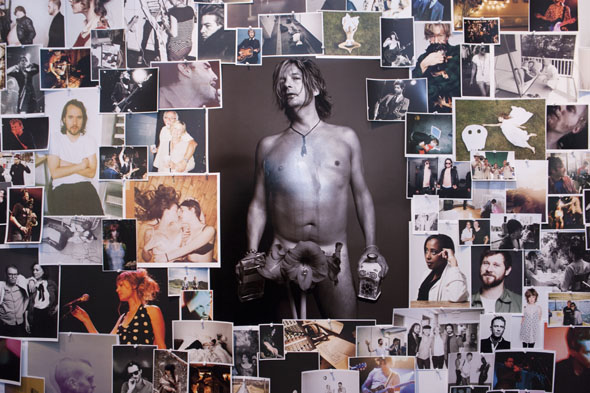 Lining the walls of the pop-up gallery's main space are about fifteen large black and white portraits; images of Feist, Broken Social Scene, Cold Specks, and Jason Collett look down on the less-musically inclined gallery goers as they enter the room from the merch shop. (The wall of brightly illustrated tour posters and album art — Feist's Metals, Dan Mangan's All At Once and BSS's final album Forgiveness Rock Record — could be an exhibit of its own.) 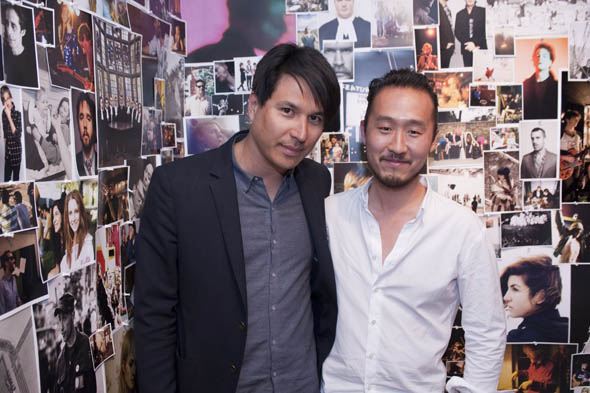 As the exhibit extends to the back of the space, through a narrow hallway, smaller black and white prints of recently signed artists are displayed. The Darcys appear together in a portrait, posed and more serious than their normal concert demeanor suggests, while their labelmates Gold & Youth are photographed independently of one another. 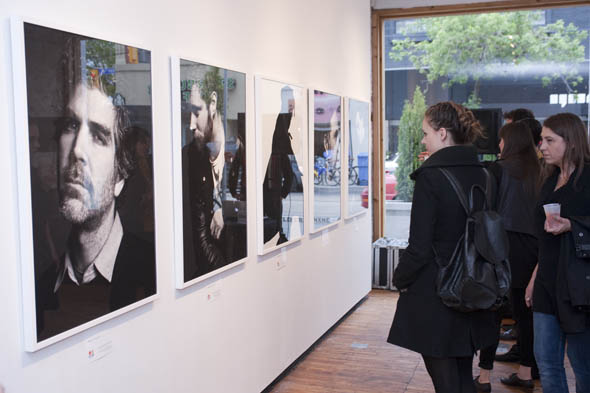 By the time the hallway opens up to the back space of the gallery, images are tiny but more personal. Framed Polaroids show artists like Haines and Feist casually hanging out at festivals and on city streets; fun, light-hearted snapshots that are in direct opposition to the posed, deeply-thought out portraits that line the walls of the front gallery space. 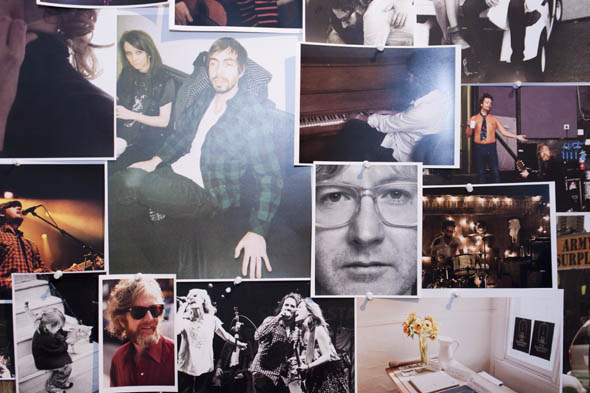 Adjacent, a retrospective collage of coloured prints shows just how long Wong has been involved with the A&C family. Photos of Emily Haines, Stars, Constantines and The Dears on soundstages, in subways, on stoops and in bathrooms are plastered overtop each other. There are so many images of A&C's artists drinking, smoking, and (in some cases) playing with finger puppets, every glance extends the grand narrative of the label. 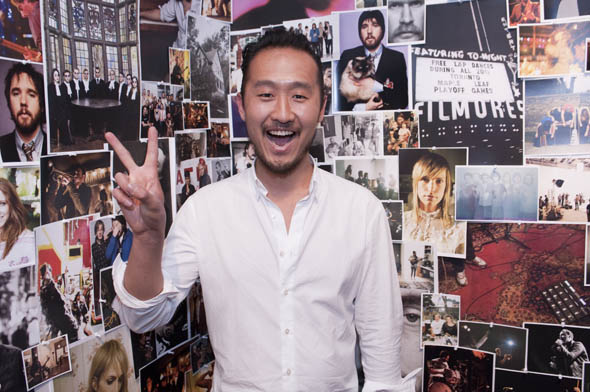 Arts & Crafts has done a lot for Canadian indie music and Wong has been granted access to all of it. Norman Wong x Arts & Crafts is really a timeline of a long-standing relationship amongst several artists.

"It's like the mafia," Wong says, half shouting over the music and the buzzing crowd as the gallery filled with record executives, musicians, media and filmmakers. "It's all about building trust with these guys." 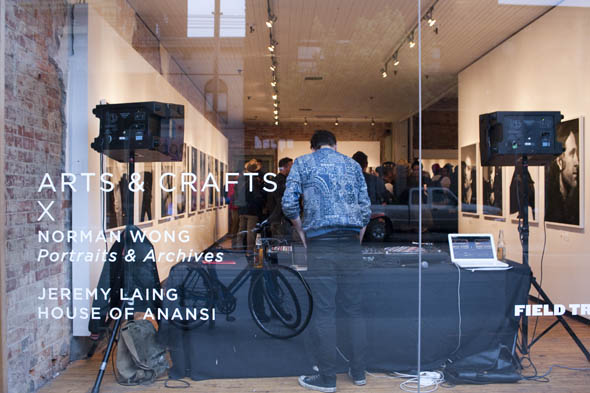