Game of Thrones comes to life at the Design Exchange

Winter is coming again to Toronto. "Game of Thrones: The Exhibition" has kicked off its world tour in Toronto at the Design Exchange, running until March 16.

The interactive exhibition brings to life the world of Westeros, the setting of the immensely popular HBO fantasy series, which is adapted from George R.R. Martin's beloved novels. Not surprisingly, all 22,000 free tickets are sold out, but there will be a rush line on all show dates. 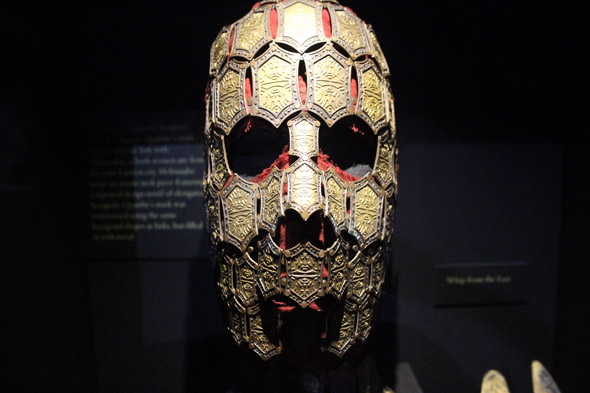 "It's really about the show's intriguing and complex characters. No one is really all good or all bad. The characters are very believable and the scenes are quite dramatic. It's the mix of the fantasy world with the characters and drama that makes the show so appealing," says Scott Campbell, communications manager at The Movie Network and HBO Canada.

Curated by HBO, who worked closely with the show's talented artisans, the exhibition focuses on key characters from five noble houses, who are vying to win the Game of Thrones: Stark, Lannister, Targaryen, Baratheon and Greyjoy. The characters comprise the exhibition's five major sections. 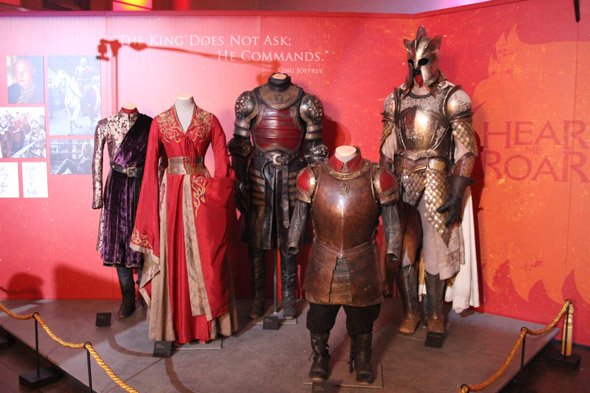 Campbell says this year's show is larger than last year's exhibit at TIFF Bell Lightbox. "There's a lot more stuff, including things that have never been seen before. This exhibition has also been built to tour." Toronto is the only Canadian stop; subsequent stops include New York City, Sao Paulo and Amsterdam.

The exhibition gives fans a visual cornucopia of over 70 artifacts from the show's two seasons - including costumes, armour, weapons and props. Seeing the pieces of the medieval world set against the Design Exchange's contemporary backdrop makes it more apparent the incredibly detailed work that goes into bringing fantasy to life.

The show's costume designer Michele Clapton's work is beautifully displayed. To ensure accuracy, Clapton even dressed the mannequins, including those representing the Stark family, who pose in the exhibition in the same way the characters did on the first episode during the arrival of King Baratheon. 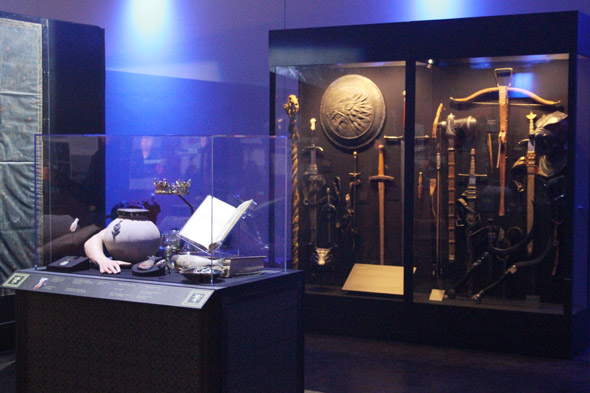 Fans will undoubtedly find the weapons and props cool. These include: crowns and jewelry; Arya Stark's "Needle" sword; Jon Snow's "Longclaw"; demented Joffrey's crossbow; The Hound's helmet; two of Daenerys' three dragon eggs (the third egg was given to author Martin as a wedding gift); and a jar of wildfire, the explosive liquid that Tyrion Lannister uses to win the epic Battle of Blackwater Bay.

Speaking of that battle, the exhibition's showstopper - without a doubt - is the interactive Blackwater Bay video game, which lets attendees become part of the pivotal battle from the second season by shooting flaming arrows at approaching ships to blow them up. It's a lot of fun! 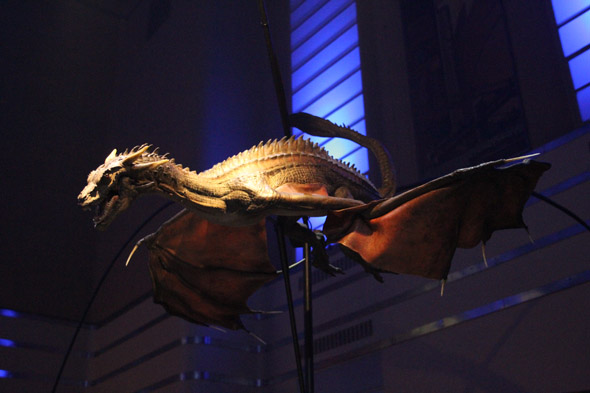 The third season premieres March 31 and attendees are treated to a sneak peek, including a costume belonging to new character, The Lord of Bones. Also, let's just say that Daenerys' dragons are bigger and you get to see one of them on display.

Collectively, the show and books have made the Game of Thrones brand a pop culture juggernaut; its success largely thanks to its international cult following. The exhibition also shines the spotlight on the fans, displaying some of the beautiful fan art submitted through the official Game of Thrones Tumblr.

As attendees leave the exhibition, they can pledge their allegiance to one of the five houses and take a picture on the iconic Iron Throne. 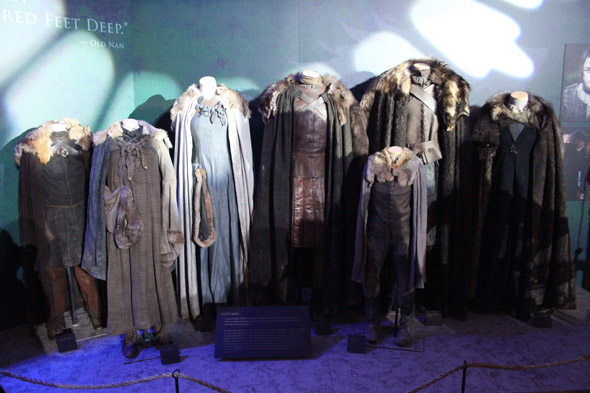 Campbell predicts that Torontonians, as a whole, will lean towards House Stark. "Canadians are a little more reserved and the Starks seem to have that more reserved attitude. So my prediction would be Stark, but my hope would be Targaryen, because they're very unpredictable." 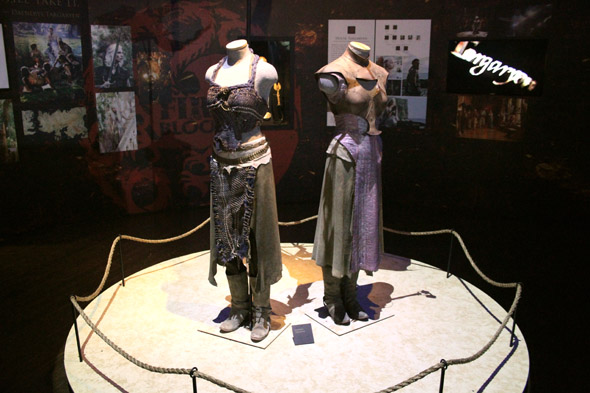 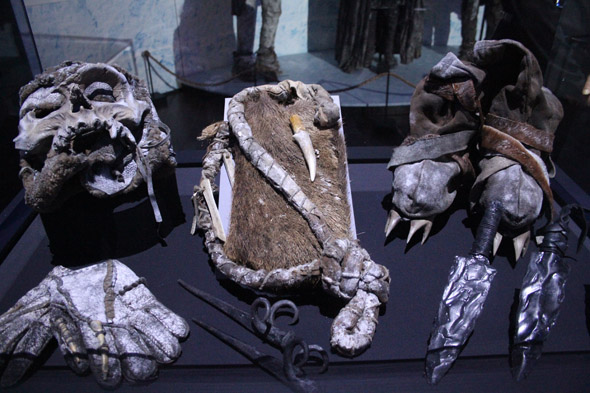 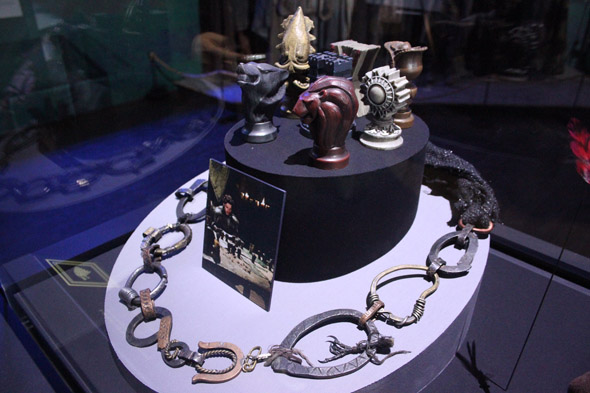 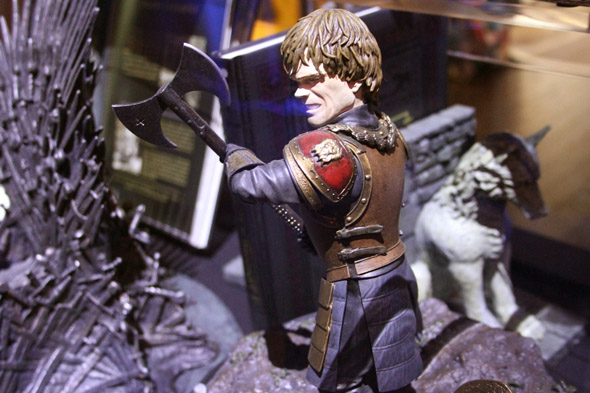 Which noble house do you identify with and why? Pledge your allegiance in the comments below!