A stack of sugar cubes spell out "Step Up To It, inviting Design Exchange visitors to literally step up to "it"--a frame suspended from the ceiling--and smile. This smile-activated art piece is an interactive installation piece at The Happy Show, a traveling exhibit that has found a home until March 3rd at the DX. Step Up To It lights up from white to pink each time a new visitor smiles. Some achieve a greater brightness than others, but the result is always the same: the individual walks away with a natural smile.

At the opening of his first Canadian exhibit, the Austrian designer circled the third floor, where The Happy Show has settled into its yellow-walled home, with a calm smile and an open demeanor, inviting all media and guests to approach him about his ten-year project that seeks to qualify happiness. 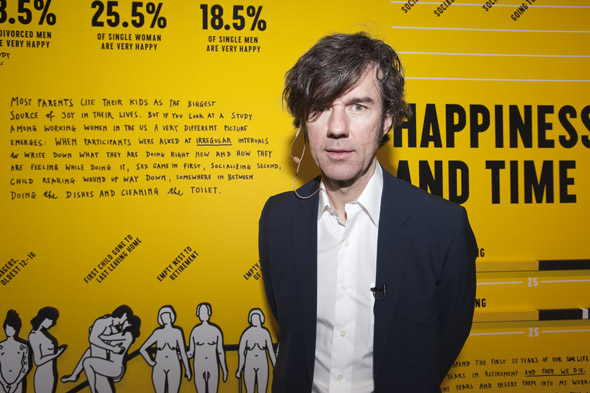 The project began back in 2000, when Sagmeister put his graphic design career on hiatus (or so he thought) after great success working with brands like LEVI'S and designing Grammy Award-winning album covers for Talking Heads and David Byrne. Seeking artistic experimentation, the projects Sagmeister began working on ended up creating the bulk of The Happy Show.

Arriving in Toronto four days prior to the exhibit opening, Sagmeister immediately went to work piecing together the show. Handwritten social observations (mistakes and all) and hand-drawn infographics based on the data of psychologists like Daniel Gilbert and Jonathan Haidt stand out in bold, sharp lettering on the freshly-painted sunflower-hued walls. Sagmeister uses the findings of these psychologists to determine that we live in happier times, but also does his fair share of data-gathering. 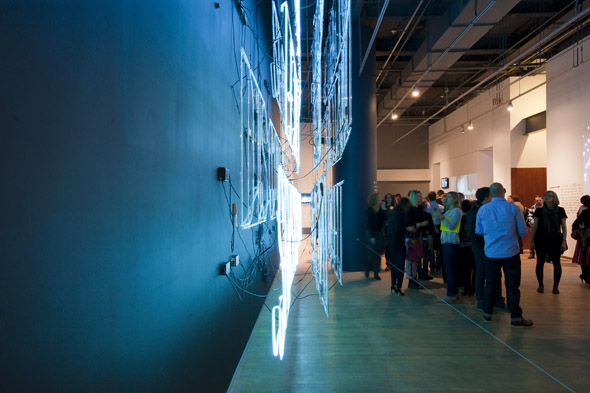 The fun begins at the entrance, where 10 plastic tubes of yellow gumballs make up the "Gumball personal happiness survey." Sagmeister's instructions direct visitors to take from the number that corresponds with how they would rate their own happiness out of 10. As opening night draws on, tube #9 proves to be popular. However, it is difficult to measure the degree of accuracy. As one guest remarks, "Anyone whose happiness is at a 2 would be too embarrassed to admit it."

Little details fill the exhibit with quirky messages painted above thermostats ("I like to move it, move it"), sound life advice at the push of a button (literally), and large-scale interactive pieces that make guests feel like they are on an adult school trip to the Ontario Science Centre. 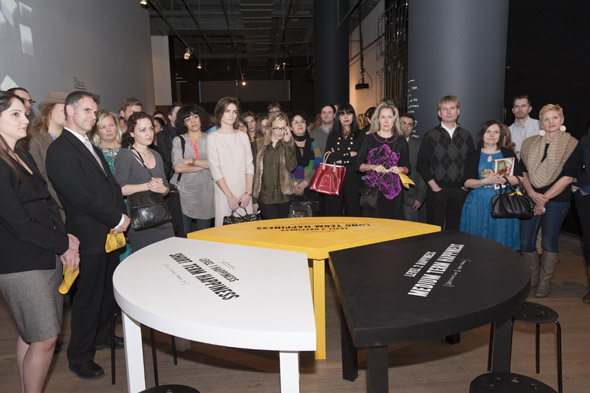 Beyond a projection of the 14-minute preview of Having Guts, Sagmeister's documentary about teaching the self to be happy, is the show's main piece. "Actually Doing the Things I Set Out to Do Increases My Overall Level of Satisfaction" is a bicycle-powered installation that allows the rider to assume control of a neon-lit message that sprawls across the east wall of the gallery.

A difficult ride, the cyclist must engage in physical activity to unveil the message of the piece. The installation provides a maxim to live by: ambition and goal completion create happiness. Not surprisingly, next to the bicycle is a wall of extended plaster hands offering Sagmeister's favourite ginger candies with another hint to happiness: reward. 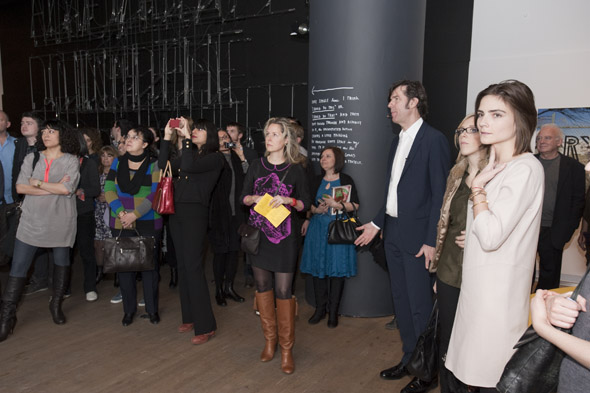 But, Sagmeister does not assert that he has the answer to happiness or that it can be achieved by visiting The Happy Show. He juxtaposes silly moments, like "Happiness symbol survey," with stories of personal struggle--such as overcoming his cigarette addiction in "Drugs Are Fun in the Beginning but Become a Drag Later On."

Sagmeister presents his audience ideas on how to train their mind to be happy, much like they would train their body: smile, be ambitious, complete goals, reward yourself, reflect, socialize. The exhibit doesn't have the answer to happiness because overall, the underlying narrative of The Happy Show is a personal one. And truly, Stefan Sagmeister is a really happy fellow.

The Happy Show is on now until March 3, 2013, and you can purchase tickets online.