As a member of Toronto's underground art and music scenes for over 20 years, artist Alex Currie has accumulated quite the CV. Best known for painting the facade of Lee's Palace, Currie has also created band posters, comic books and even a painted van commissioned for a trip to Burning Man since his ejection from the service industry in the mid-80's.

For his latest undertaking, Currie (a.k.a. Runt a.k.a. "the Lee's Palace Guy" (apparently unconcerned about being pigeonholed, this is printed on his business cards) has taken on the role of curator, bringing together the work of fellow "Indie Outsiders" John Abrams, Menno Krant, Mike Parsons, and David Irvine at the Steam Whistle Brewery. 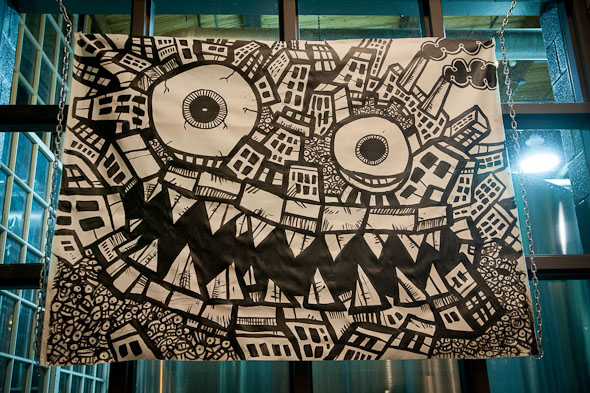 It's a great fit, as the brewery has built a reputation around its often esoterically-themed group shows. Since they don't charge rent or a commission on any work sold, Steam Whistle has shown some fantastically diverse art over the years, and the exposure that they provide to emerging artists is priceless. But frankly, the brewery just isn't a great place to view art. Wall space is limited once you factor in the photo booth and over-sized beer coolers, and attending an opening can be a pretty disorienting experience. But for "Indie Outsiders: Hanna Barberic", this actually works to its benefit. 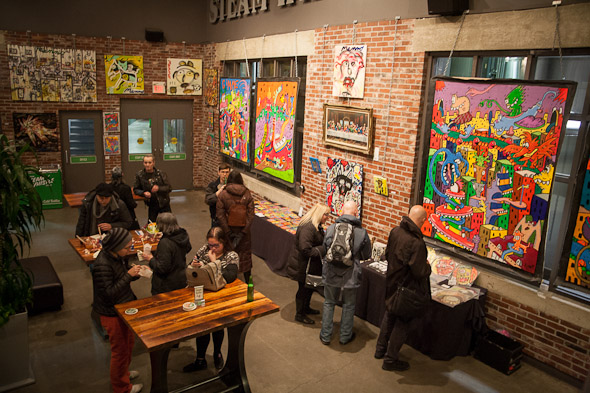 "Indie Outsiders," despite its manic mix of artistic styles, actually feels a lot more unified than the typical Steam Whistle group show, as its participants all seem to share an appreciation for absurdity and pop culture kitsch. And when they're not taking on Ke$ha or internet meme culture, they show the influence of other traditionally "outsider" artists; Krant's frantic, unrefined symbology is pure Basquiat, while Runt's work feels like the lovechild between R. Crumb, Jim Woodring, and Dr. Seuss. 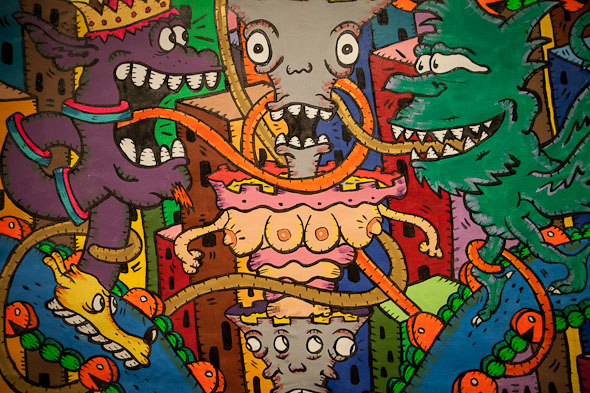 For me, the show's highlight is definitely David Irvine, whose work best tows the line between low-culture homage and parody. As part of his "Re-Directed" series, the artist repurposed the type of old paintings you'll find cluttering the racks of any average thrift shop. Disney characters, internet memes and rubber ducks are overlaid on top of pastoral landscapes and paintings of clipper ships (often with Irvine's signature painted beneath that of the original artist). Seamlessly combining the kitsch of the past and present, Irvine's work is a giddy ode to the banality of mass-produced culture. 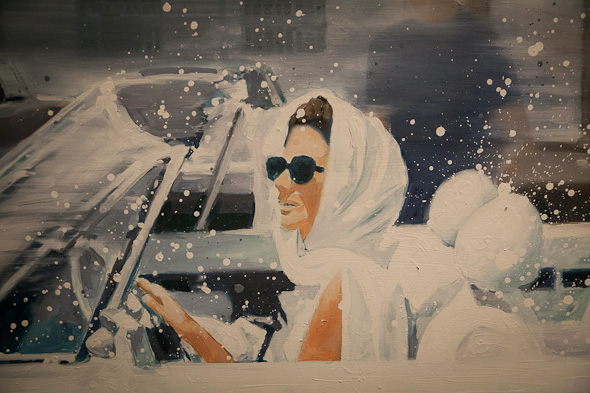 It is also more provocative than some of the more traditional means of rebellion on display. While Runt is best known for his large-scale works, he had several smaller painted records and canvases for sale during the opening. Consisting of rudimentary cartoons littered with scatological humour and misspelled profanity, these pieces didn't ring as subversive as perhaps intended. I prefer the larger murals, where the vulgar phantasmagoria of his comic scenes can be more fully appreciated. 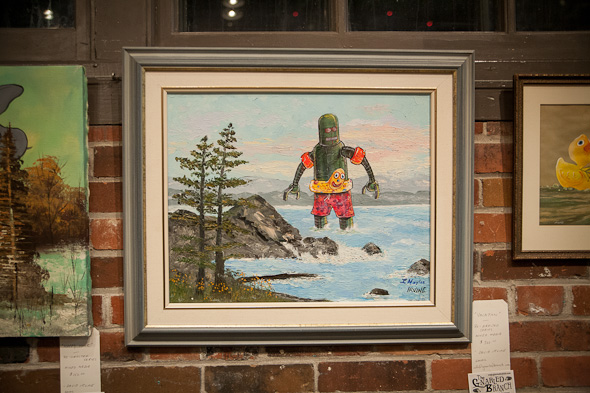 As Runt's own bio admits, the work may not be spiritually fulfilling, but hey, its fun to look at. And if you're one of those particular "indie outsiders" who came of age during the golden years of Toronto punk, it'll probably be especially fun.