The best and worst of Zone C Nuit Blanche 2012

Zone C brought some pretty eclectic offerings to Downtown's East. Entitled "Once More with Feeling," the majority of the works centred around notions of performance, repetition, and sound and music. They were smaller-scale projects than the massive installations attempted in Zones A and B, and when they succeeded, they provided a much-needed respite from the night's manic energy. Of course, on the opposite end, quite a few of them simply got lost in the crowd.

Tremolo
Despite being an accomplished classical pianist, Maeve Brennan suffers from such severe stage fright that her fingers tremble during performances and she often freezes up entirely. Brennan breezed through a composition in the 12:30 performance of Tremolo, and the complaints we heard that she "didn't seem nervous enough" were a pretty great commentary on the judgments and expectations audience members bring along to works of art. 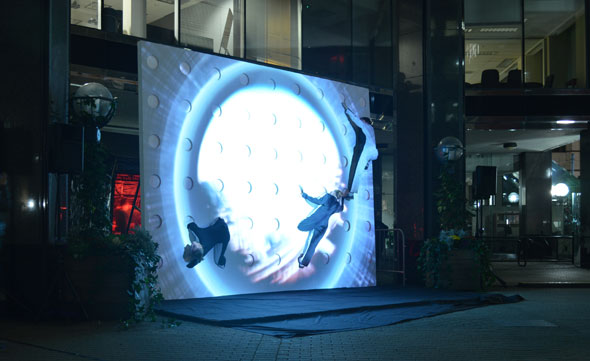 The gravity-defying dancers of the Trisha Brown Company didn't disappoint. Their performance, featuring a 13 x 21 foot backdrop of a 16mm film by Jud Yalkut and a soundtrack of a vacuum cleaner by Simone Forti, was one of the night's most successful merges of the conceptual with the spectacle.

The Day After, Tomorrow 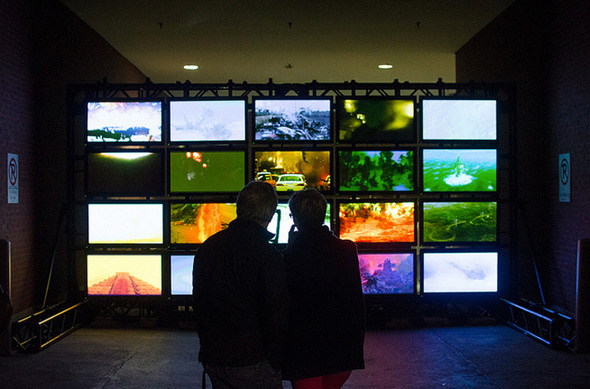 Alternatively comical and upsetting, Dave Dyment's cinematic chronicle of disaster movies hypnotised the large crowds who gathered to watch the destruction. Linger too long, and the work's multiple screens and horrific violence had a thoroughly numbing effect. Compelling stuff for something named after a movie where the cold chases Jake Gyllenhaal down a hallway.

Nuit Blanche Survey and Critical Race
Julian Higuerey NĂşĂąez and Henry Adam Svec's meta performance piece pitted the two artists against each other in a race to see who could visit all 300-odd pieces in Nuit Blanche. The duo's piece was a great commentary of the usual criticisms lobbied at the event, and their hilariously dull installation piece of a large screen displaying their tweets along the way showed the disconnect between the festival's social media portrayal and its true reality. 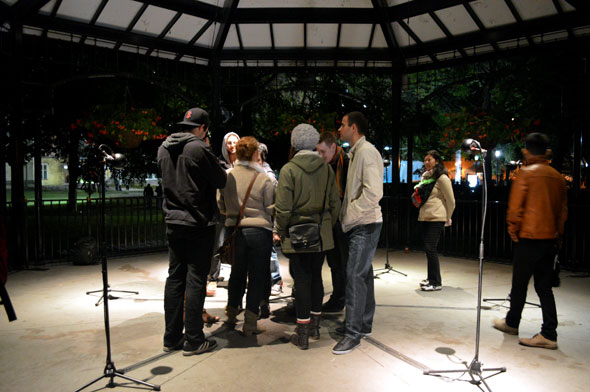 A sound installation is difficult to pull in off in a rowdy environment like Nuit Blanche's, but minimalist musician Susan Stenger's complex ode to Western music, Eastern philosophy, and the composer John Cage made for a beautiful communal listenting experience. 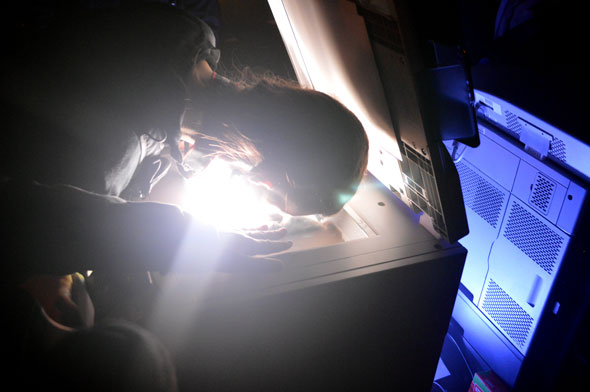 11:45 pm is admittedly way too early to check out a rave thrown by DJ's from Berlin, but Body Xerox still seemed like a definite bust. The office theme was hardly conveyed, what with the generic black tent that housed the event, and as use of the photocopiers was directed and supervised by volunteers, it seemed unlikely that anyone could actually let loose. Throwing in the fact that the music was objectively undanceable, Body Xerox was my biggest personal letdown of the night.

Tethered Motion
Varun Vachhar's giant wind-up toys were simply too ungainly to wield. Though they were supposed to mimic a bird in flight, the mechanics of the wooden contraptions more closely resembled a bird struggling with two broken wings.

Photos by Chris Bateman (expect the Day After Tomorrow photo, which is by chrominance