The best and worst of Zone B Nuit Blanche 2012

Zone B at Nuit Blanche 2012 covered a sweeping area of the city that spread from Yonge and Dundas to the Financial District to Queen West and the Annex. And that's not to mention the little hub of activity at the Wychwood Barns. That's a lot of ground to cover, especially when you hope to catch a few exhibits in other zones. So the usual proviso: the following exhibits represent my highlights and lowlights. I'm sure I missed a few good ones that belong on this list, but that's what comment sections are for (if nothing else). 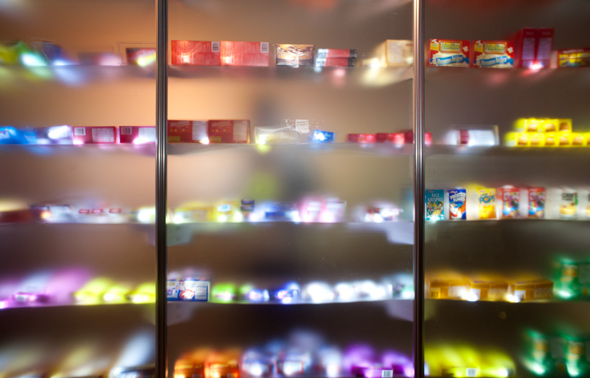 Well, this one was popular! At its peak, the lineup for All Night Convenience hovered around two and a half hours, but it's hard to argue against how enticing the whole thing was. The luminescence of the product-based lanterns just looked so, um, fucking cool! Really, I can't articulate it much better than that. Plus, as a sort of reward for waiting for so long, at least you got to take something home! 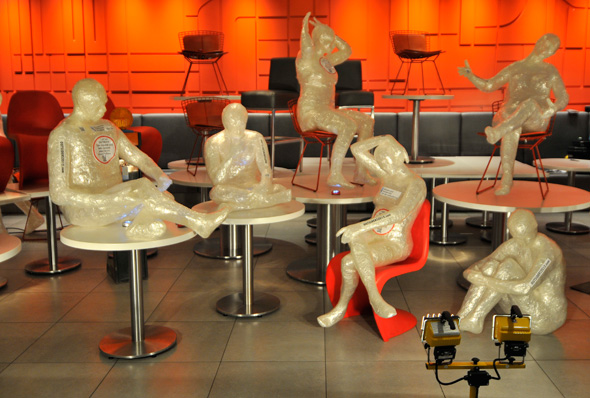 Nuit Blanche exhibits tend to work best when they foster audience interaction. Spotted throughout the zone and beyond, these life-sized foam-like statues were adorned with some pretty basic instructions: "If you find me, take me with you, take a photo, pass me on. Post photos to Twitter or Facebook (Outsiders2012)." Here's how it went down. And it looks like most of them made it back home! 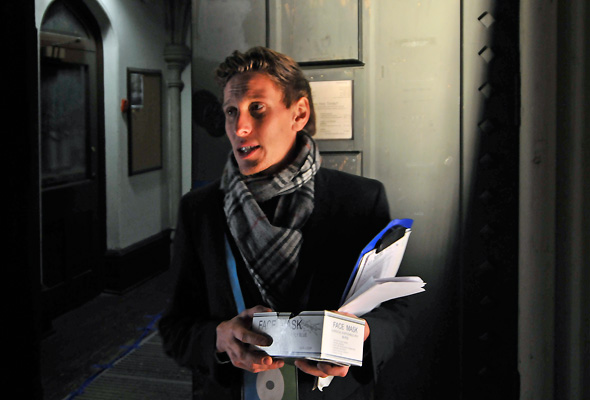 Staged as a screening station for a biotech company trying to manage a pandemic, Byologyc witnessed extensive lineups throughout the night. Those who chose to willingly suspend disbelief were treated to some theatre outside the exhibit in the form of mock protesters and security personel. I was too tired to enjoy this part, but once we made it inside, the sheer absurdity of the whole exercise was great. Case in point: during my screening I was asked to show "my war face" and how I would put down a sheep." What? 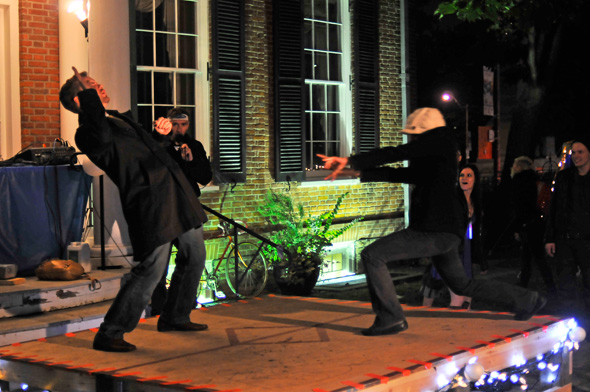 Hands down (up?), the most fun exhibit/performance I visited all night. While the competitors were mostly wasted by the time of my arrival, a few of them managed to pull off some impressive high-five choreography (and when they didn't, that was funny too). Lighthearted, and featuring some biting commentary from the announcers/hosts, this was one of those pleasant Nuit Blanche surprises.

Heretical Objects -- Glow in the Park 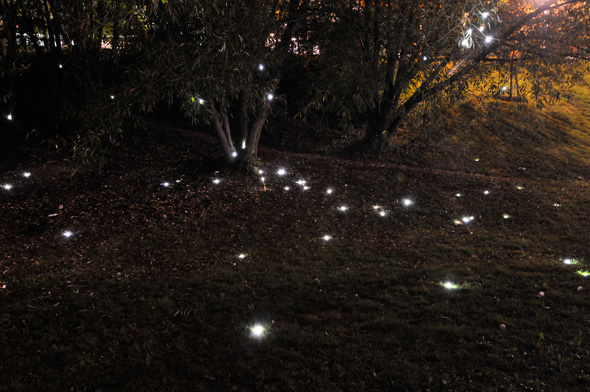 It was a bit off the beaten path given the layout of exhibits, but Glow in the Park was one of those simple light installations that just work. Ostensibly just 100s of ping pong balls filled with a small light, taken as a whole, the installation inverted land and sky such that the stars were spread beneath one's feet. Oh, and you could throw them too! The photo doesn't do it justice. 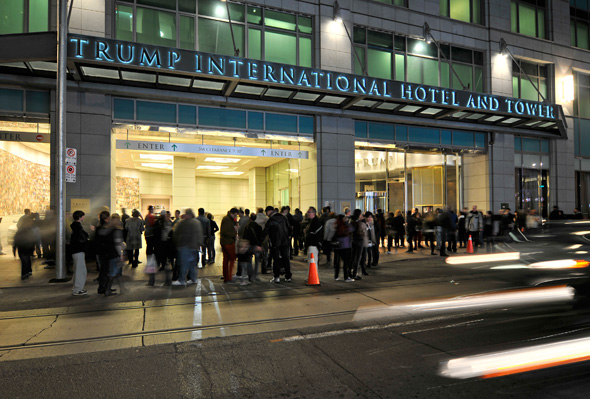 This should really be a knock against Nuit Blanche in general â or at least its attendees â but the crowd that gathered outside the Trump Hotel to see a valet awkwardly park a Lamborghini was the kind of spectacle that throws the whole night into relief. Don't forget Duchamp, guys. Looked at in a certain way, pretty much anything can become art. Even a bunch of morons falling over themselves to see a car. 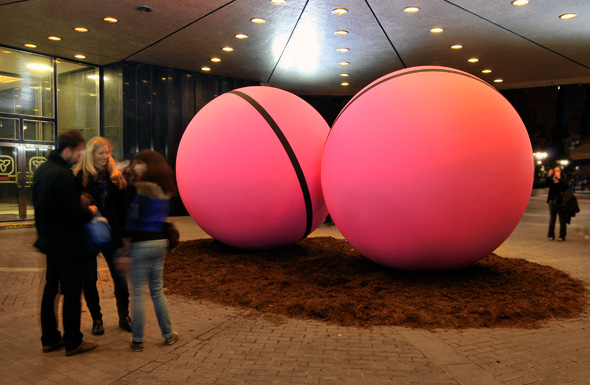 Although they didn't make good on the claim that they'd shift the viewers perception of the space around them (or at least any more so than any object would), the sight of two unmistakably testicle-like orbs lit up in the night was in and of itself pretty cool. 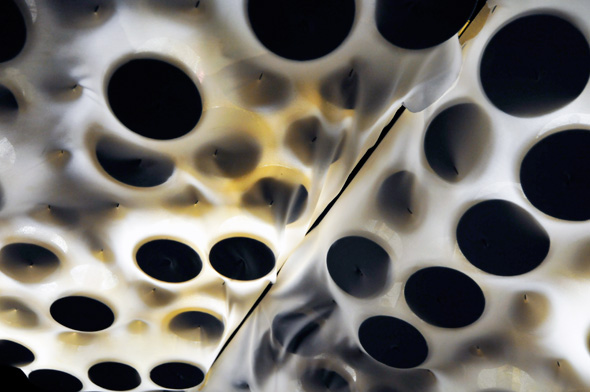 An interactive light tunnel? Sign me up! This was close to being a hit for me, but by the time I rolled through, the installation seemed to have taken a bit of a beating, which seemed to diminish the lighting effects. 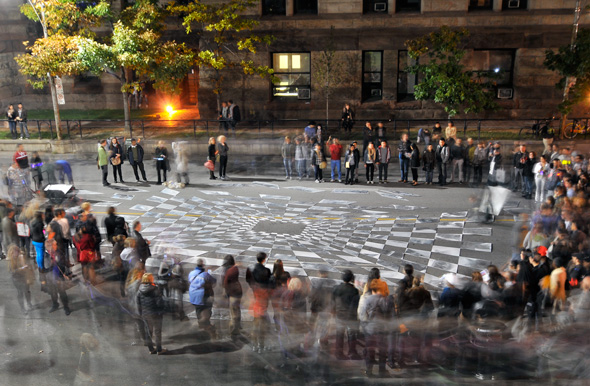 Peter Bowyer's Flat Space proved a difficult place to control crowds who continually made themselves a part of the exhibit. This was mostly a good thing, but some of the drunken interventions weren't exactly that welcome.

Yonge and Dundas
Fuck you, Yonge and Dundas. What a terrible place to spend time. I don't mind crowds (in some sense, they demonstrate the health of an event), but this served as the heart of mindlessness during Nuit Blanche, and so exhibits like Reflexion and Talk 2 Strangers, which had some potential, were made almost impossible to navigate. Plus, there was shit. 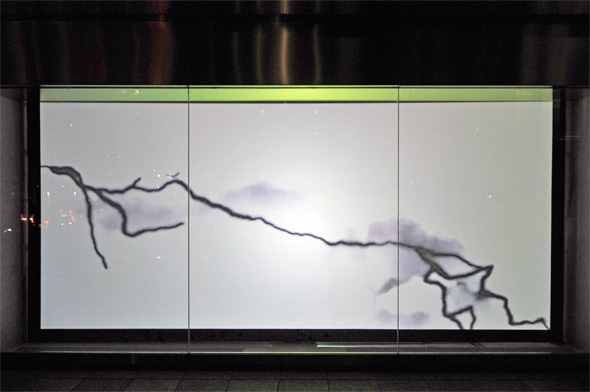 I hate to shit on stuff that I think is actually pretty cool in principle, but as a Nuit Blanche light installation, this just did nothing for me. Black lightning on a white screen. The subtle Nuit Blanche reference was a plus, but after spending a couple minutes here, the resounding sentiment was "next!"

Photos by the author and Natta Summerky