The best and worst of Zone A Nuit Blanche 2012

Zone A's installations were centered predominantly around King Street, with the goal that they would "(transform) architecture and landscape in ways that highlight memory, history and imagination and converge in our everyday experiences." It's a broad theme, and it allowed from some truly exciting outdoor art and interactive installations. And, naturally, a few misses to. 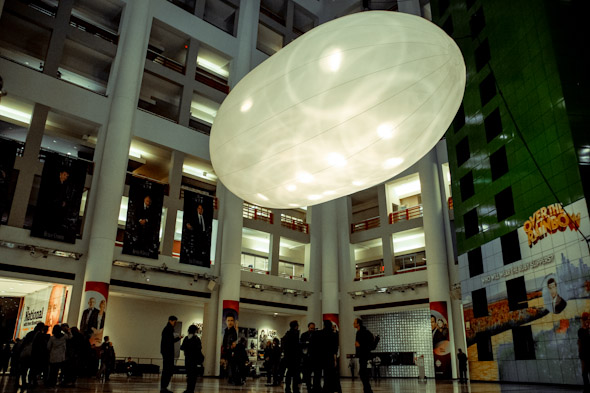 Understated and beautiful, Andrew Kearney's massive zeppelin lit up the CBC building. Skylum's changing light display responded to the movements of viewers, referencing the pulsating energy of Nuit Blanche's throngs of visitors without being overwhelmed by them. Skylum made me believe in the beauty of the community brought together by the event, at least until someone nearly puked on my shoes. 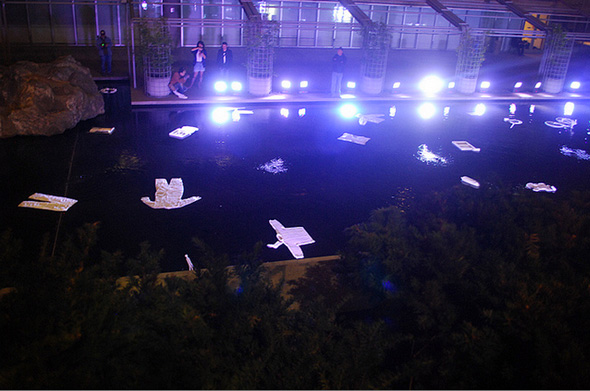 Creating an atmosphere for serene contemplation on King Street is no easy feat. Will Gill's installation, in which ghostly white objects floated on the placid pond at Roy Thomson Hall, was a gorgeous and eerie visual effect that made for an appreciated alternative to the zone's showier street pieces. 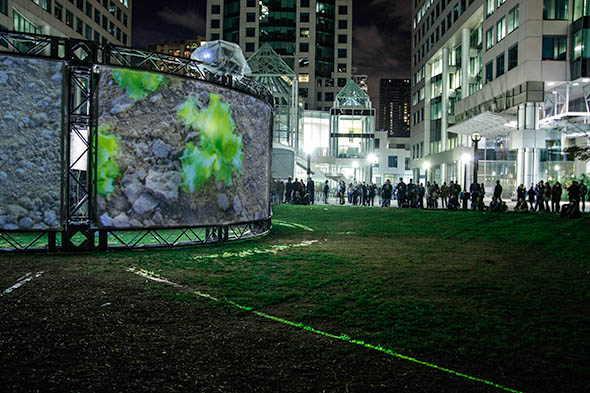 Matthew Moore's video piece was another example of the merits of keeping it simple. A circular group of concave screens showed the growth cycles of agricultural plants using time-lapse photography. Surprising affective.

Postcard 44
Out of the official Zone A area, the 401 Richmond building offered up some fabulous, and decidedly calmer, interactive pieces. The most fun by far was the recreation of Andy Warhol's infamous Factory at Gallery 44. Visitors dressed themselves as Andy, Edie, and their various hangers-on to recreate the see and be seen art scene of 60's New York, with their photos immediately available for viewing on Facebook, or course. 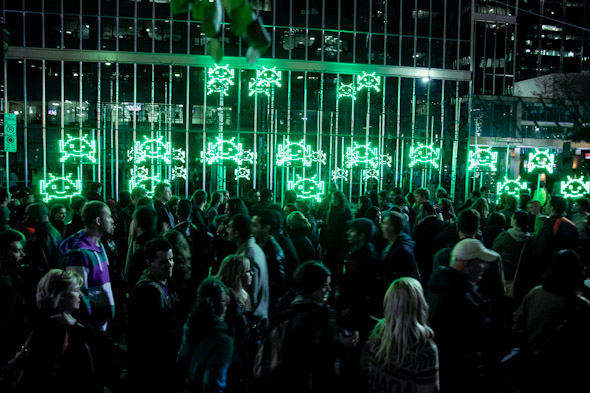 As the description read, "They're green, they're angry, they're happy, they're from the 80s and the whole city is their playground." Yves Caizergues may not have aimed for any lofty artistic concepts with his light installation, but Green Invaders was still well-executed fun, no matter which video game console you grew up with.

Nest
Having heard nothing about it in advance, encountering Nests on my bike ride home made for a lovely surprise. The project featured 50 illuminated pipe-cleaner sculptures placed in trees along Bloor Street West between Dufferin and Lansdowne. Simple, beautiful, and capable of redefining our understanding of the space around us, Nests was a perfect and unassuming addition to Nuit Blanche. 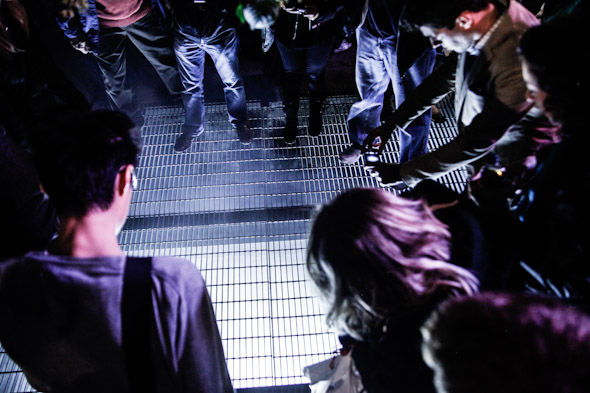 The concept photos of this exhibit looked gorgeous, but the execution was a little underwhelming. The "beam" of light was not bright enough to extend far beyond the surface of the street, and instead only revealed the tarps and piping of the sewers below. Coupled with pushy crowds and aggressive security guards, the elegance of the concept just didn't materialize.

+city
Improv comedy is a dynamic thing, so of course, my experience with the Second City's Twitter-fuelled sketch marathon is by no means definitive. But the overly-specific prompts were a definite hindrance ("morticians in a travel agency in the centre of the world," for one), and the performers seemed on edge.

Virgin RadioTent
They blared top-40 into a crowd of drunks, teens, and drunken teens. What they wrought was unforgivable.

Photos by Denise McMullin (with the exception of the High Water shot, which is by FortheRecords)