Nuit Blanche 2012 lands in Toronto this weekend, ready to transform the city into a giant late-night contemporary art gallery, with daring and largely interactive work displayed throughout the downtown core. Yes, it's Nuit Blanche, and love it or hate it, it's coming to your front door.

Now entering its seventh year, Nuit Blanche has become increasingly divisive for its corporate presence and curatorial choices. Whatever your stance on the festival, it's clear that this year will be offering up some truly exciting installations over its three zones. Half the fun is stumbling upon work yourself, but if you'd like to catch the highlights before the usual swarms of teenagers and drunks take over, we've come up with a list of sure things.

Here are 20 exhibits we think you should have an eye on. For practical information regarding the hours of the event (hint: it starts at sundown which is just after 7pm), transportation, the official mobile app website, etc., please consult the City of Toronto's Nuit Blanche information pages and the main Nuit Blanche website. 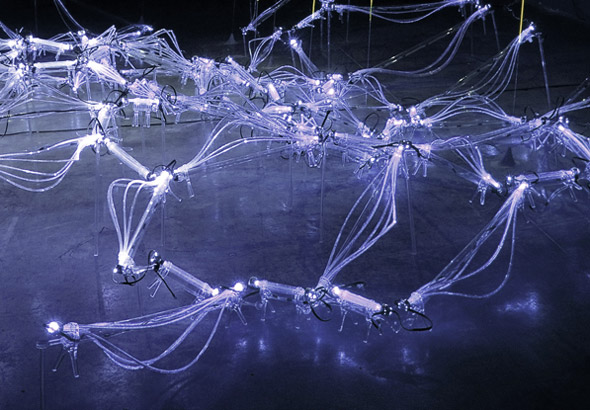 We've already discussed the marquee exhibit at Nathan Phillips Square in some depth, so have a look at our chat with curators Janine Marchessault and Michael Prokopow for more information on Museum for the End of the World.

416-788-9663 - Geoffrey Pugen
Geoffrey Pugen played a game of tennis for Nuit Blanche last year, and he keeps up with the theatrics by recreating a Toronto dance party from 1994. In a putatively secret location, no less. While the interactive nature of the installation sounds low, I was already sold when I heard "secret location" (even though I can guarantee you it'll be relatively easy to find). Somewhere around City Hall (outdoors).

Symposium - Until the End of the World
If your idea of a fun Nuit Blanche is hanging around grad students immersed in literary and cultural theory, this is for you! Yes, Slavoj Å½iÅ¾ek will be there, as well as Arthur Kroker and Brenda Longfellow. The subject matter should be vertiginous with philosophical potential — we are talking about the end of the world here — so maybe make a stop here at some point in the night. Remember, it's always nice to get warm! City Hall Council Chambers. 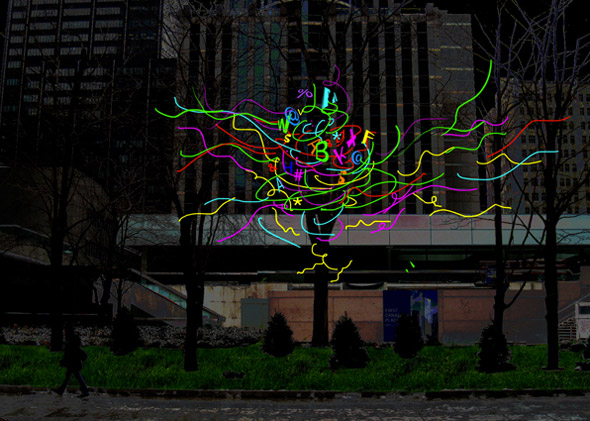 Cent une tueries de zombies - Michael Lane and Colin Geddes
If you've been working on your Zombie Apocalypse strategy, TIFF Lightbox has just the installation to help you fine tune it. Lane and Geddes' piece is a looped video compilation of 101 zombie death scenes culled from cinema and television. And with admittance restricted to those 18 years of age or older, it'll surely be suitably gory. TIFF Lightbox

Tower of Progress - Laurent Gagnon
Designed as a "monument to the present," the tower is a 16-foot obelisk composed of metal parts of discarded and outdated technology. Combining everything from sewing machines, typewriters, and cash registers, the structure is an ever-growing testament to our materialist concept of progress. Scotia Plaza, South Forecourt, 40 King Street West

The Institute of Knots - Swapnaa Tamhane
If you're feeling sadistic, visit the MOCCA for this interactive installation, which encourages participants to tie as many knots as they choose, all of which will later be untied by the artist in "a work that attempts to explore frustration, futility, and humour." Museum of Contemporary Canadian Art.

LEITMOTIF: Hands on the Van - Jon Sasaki
Or maybe you're more the masochistic type? In Parkdale, Jon Sasaki invites participants to compete for his $500 artist's fee in an old-fashioned "keep your hands on the van contest." As the evening's traditionally frigid temperatures will probably limit your competition, the prospect may prove appealing. Queen Street West & Brock Avenue 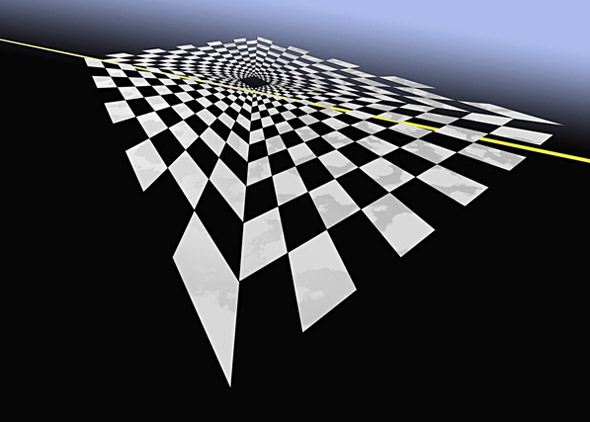 All Together Now, 2012 - Jeanne Holmes
Wanna dance? If you're one of those people who thinks that Nuit Blanche is still taken too seriously, this could be a good one to check out. In keeping with the idea that the whole night is one big spectacle, this exhibit will teach the masses how to dance in a whole variety of styles. Check the link at the top for a breakdown of exactly what's on offer at what time. Richmond Adelaide Centre

Flat Space - Peter Bowyer
Sometimes Nuit Blanche Exhibits are just cool, and that's what I expect from Peter Bowyer's Flat Space. A huge "optical structure" that'll be located at Queen and Bay streets, the installation is meant to function as something of an alternate dimension. So, in other words, watch out for the stoners that are going to flock to this one. "It's like it's eating reality, man." Or something like that. Outside old City Hall.

Pair - Neil Campbell
Also a potential mind bender is Neil Campbell's Pair, two sculptures that have been designed to challenge our perception of both the objects in question and the space that surrounds them. The photo makes it look rather underwhelming, but if these two testicles (that's kinda what they look like) can actually change my perception of space, I'm all for it. 361 University Avenue (Walkway between Osgoode Hall and the University Avenue Courthouse) 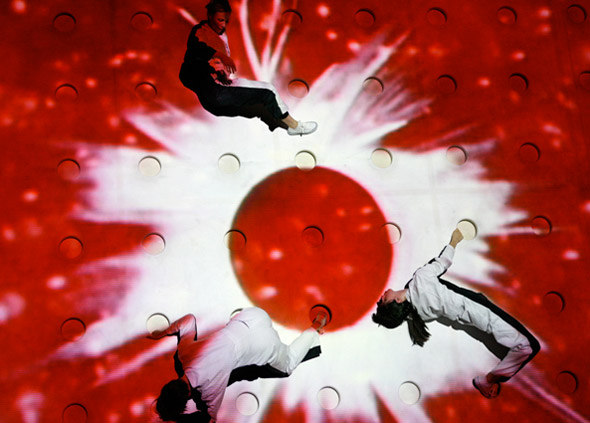 Planes - Trisha Brown Dance Company
In "Planes", a restaging of choreographer Trisha Brown's 1968 "equipment piece", dancers will scale a 13 x 21 foot wall against the backdrop of a 16mm film by Jud Yalkut and a soundtrack of a vacuum cleaner by Simone Forti. Fighting against both gravity and vertigo, they'll roll and climb across the building's exterior in what's sure to be a riveting performance. Dundee Place, 1 Adelaide Street East

Earth-Moon-Earth (Moonlight Sonata Reflected from the Surface of the Moon) - Katie Paterson
Based on Guglielmo Marconi's suggestion that sounds never die, but continue to reverberate as sound waves around the universe, Katie Paterson's player piano will play Beethoven's Moonlight Sonata as it sounds by way of the moon. To create the slightly-mangled version, Morse code messages of the composition were sent to the moon, reflected on its surface, and received back on earth, with some notes apparently 'lost' en route. Elgin Theatre, 160 Victoria Street

Thought Balloon - Brian Cauley
It may claim to be suitable for all ages now, but I've got a feeling that Brian Cauley's "Thought Balloon" might quickly spiral out of control. Participants can write whatever they choose onto typewriters and project their words onto the surface of large, glowing balloons, in a piece that "examines how the urban fabric both enables and disables social encounters." Alleyway, 132 Church Street (South of Queen Street East)

The Day After, Tomorrow - Dave Dyment
Some men just want to watch the world burn. And some men will have the opportunity with Dave Dyment's "The Day After, Tomorrow." Earthquakes, fires, floods, meteors, air attacks and other doomsday scenarios will play on a number video monitors, and will be charted geography so viewers may see the entire world destroyed simultaneously. King James Place, 145 King Street East

Top Down - BRDGlab
BRDGlab, a collective of architecture students, will reduce and reinterpret the city's topography with the outdoor installation "Top down". Viewers are invited to walk through their artificial cityscape, and contemplate Toronto from an entirely new perspective. 80 Church Street

Body Xerox - Simon Denny and Yngve Holen
Of course, Nuit Blanche's late hours and pulsing creative energy also make for a damn good party. This year's best bet is "Body Xerox," in which international DJ's Craxxxmurf and Baglady will host a rave in a repurposed office environment. Photocopiers will function as the event's lighting, while also spewing paper around the dance floor. It may not be the most environmentally-friendly art project, but it sounds like it may be the most fun. Body Xerox was started in 2009 in Frankfurt am Main by Berlin-based artists Simon Denny and Yngve Holen, and has since taken place in Berlin, Milan, Rotterdam and Los Angeles, with Nuit Blanche marking its largest version yet. King Street East & Toronto Street

HOW TO PARTICIPATE IN OUR NUIT BLANCHE COVERAGE

Naturally, we'll have team members wandering all over the city on the big night, but we'd love to make your experiences a part of our coverage as well. Here are a couple of ways that you can participate:

Lately we've been really active on Instagram, and we plan on keeping up the trend throughout Nuit Blanche, so follow us on Instagram for updates about which exhibits are worth hitting up and which you can skip. We'd love to feature your stuff, too! If you'd like your photos shared by us and considered for inclusion in a post-event roundup, please add the hashtag #blogTO (along with #snbTO or whatever tag you're using for the event itself) so we can easily find them.

If you're out shooting with your DSLR during Nuit Blanche, please consider adding your photos to the blogTO Flickr pool. Our photo roundup on Sunday afternoon is always an extremely popular post, so lots of eyes will be on your work (obviously we credit all photos to their source).