Sometimes it really does seem like that this city is determined to wage a war on fun. The other day we got an email from Felix Kalmenson, an artist who's been running a floating exhibition and residency space in a lagoon near the Gibraltar Point Lighthouse on the Toronto Islands since late June. The 8'x8' foot room didn't have a permit to operate in the lagoon, so was eventually asked to leave by the Police Marine Unit.

That, for the record, makes sense. One can only imagine the liability issues associated with something like this. And the Marine Unit did everyone a favour by forcing the space to relocate to a dock. But, where it gets interesting/frustrating is the next step. Let's give it over to Kalmenson to explain: 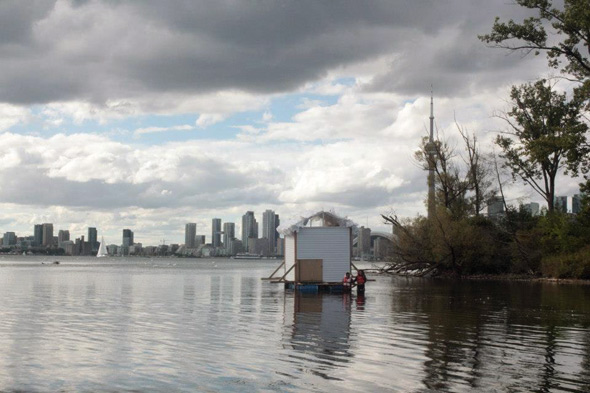 "The project was towed across the Toronto Harbor to a boat club called Sunfish Cut. The minute we docked at the new harbor we were met with a mixed reception. Several of the more arts-oriented residents approached with curiosity and ultimately approval, while another group was inflamed by a particularly disgruntled citizen vehemently opposed on the grounds that it was either not to their aesthetic taste or it wasn't officially a boat and might as they claim, jeopardize the dock (a dubious claim). The commodore of the boat club gave the okay for the move but now the group of disgruntled boat club members are threatening him with litigation, so he is backing out."

As a result of the static the project has received, the makeshift space is set to be evicted later today at Algonquin Island. It's not difficult to see both perspectives here. While the idea that the space would jeopardize the dock borders on ludicrous, I can understand why some boaters wouldn't want it around. Maybe they just think it's an eyesore.

But, then again, perhaps it's time to lighten up? Oh, Toronto. Stop being so damn stiff! And, more importantly, anyone want to volunteer their dock for a floating art space?