Toronto zine competition a warm up for Nuit Blanche

The Rustic Owl Cafe buzzed and crackled with creative energy last Thursday. People chatted about their ideas, comparing notes and pictures and exchanging stories. Scraps of paper from magazines and comic books lay in piles next to pencils, crayons and markers, not unlike an arts and crafts hour at a school.

It was all part of the 12 HR ZINE MACHINE WORKSHOP EXTRAVAGANZA, a workshop designed to bring together the disparate zine community in Toronto to harness everyone's creativity into one chaotic endeavor. Involving 10 zine groups including Carousel, Paper Pusher and Static Zine, it was a flurry of zine-making in a pressure cooker environment with an hour-long time limit.

At the beginning of the evening, participants wrote down ideas for the zine pages on a chalk board. Zack Kotzer of the Steel Bananas Collective read out all of the ideas in a booming voice, encouraging everyone to incorporate one or more of these ideas into their zine pages. The resulting list was diverse, to say the least.

"Low-quality drawings of people. Nun-sploitation. [Places] where I've thrown up. Celebrities you have masturbated to/about. My browsing history."

Participants were given an hour to make zine pages, making it a sort of Iron Chef of zines - except that once the clock ran out, harsh judgments were replaced with raucous applause.

J.P. King of Paper Pusher is working on his page, on a table with piles of shredded magazine scraps. At the centre of his page is a clipping of a horse's head, surrounded by cutouts of human legs as though he were creating an equine beholder.

"I started out with a low-quality drawing of a person (from the Idea Board), and then it sort of turned into this ghost cowboy horse collage," he says, still not entirely sure what that means.

"It's been really, really fun. It's great to just sort of let go and be spontaneous for an hour." 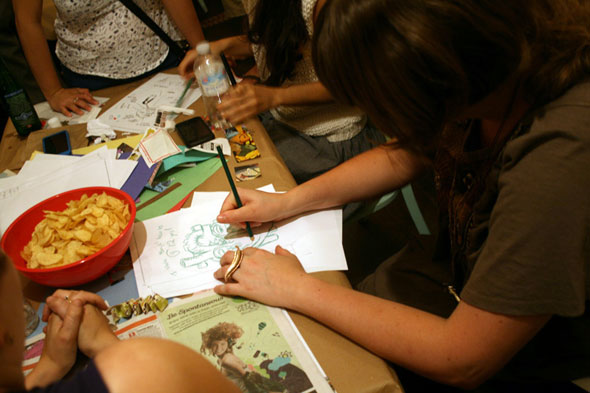 It was all just a warm-up act, however, compared to the main event: the 12 HR Zine Machine becomes an installation at this year's Nuit Blanche, to take place at the Gladstone Hotel. Each of the 10 zines involved will get one hour out of the night to create an entire zine issue of their own. The issues will then be shared online, with the original physical copies going to lucky guests.

Other participants scheduled for the overnight zine event include Koyama Press, Fiona Smyth and Chester Brown.

The 12-hour Zine Machine was created and curated by the Madeleine Collective, a team of four women with the mission objective of showcasing art forms "in a collaborative and participatory space," and Nuit Blanche was the perfect venue to showcase the zine community in Toronto.

"Nuit Blanche is fantastic because everyone goes out for it, regardless of whatever you're into high art or you're a kid, and it's a fantastic way to learn about something that you haven't heard about before," says the Collective's Cheryl Hsu.

The Nuit Blanche event will gather some of the city's best artistic talent, including some not generally associated with the zine community. The Collective reached out to groups like VSVSVS and Mammalian Diving Reflex specifically because of their visual arts backgrounds to bring something new to the zine-making table.

Hsu says the ultimate goal for the Zine Machine is to print an art book and distribute it in print. But she also hopes to showcase the zine community and its creative spark to a wider audience at Nuit Blanche.

"Ideally people will come to the exhibit or see the zines online, and come away inspired and go off and make their own zines," she says. "The point of zines is you're supposed to be creative; you're not supposed to think along lines or borders."

Writing and photos by Jonathan Ore