Under the charge of a West Queen West-condo developer, 50+ graffiti artists have converged on Parkdale to reclaim an often-tagged sound barrier that for years has been a battleground for writers to strut their stuff. Located along the Metrolinx rail corridor a few hundred metres southwest of the Gladstone Hotel, the Reclamation Project is the largest graffiti mural in Canadian history. 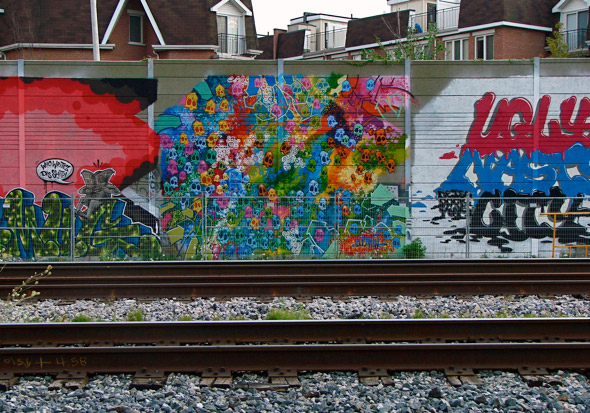 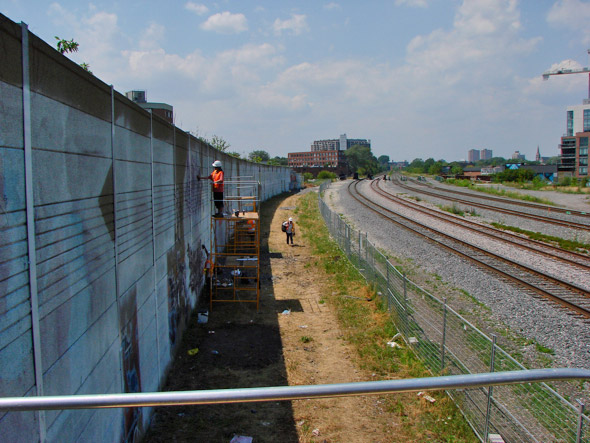 Uniform in size and font, each letter has been assigned by the project's curators to a different graffiti writer (or group of writers) to design according to his or her own distinctive style. 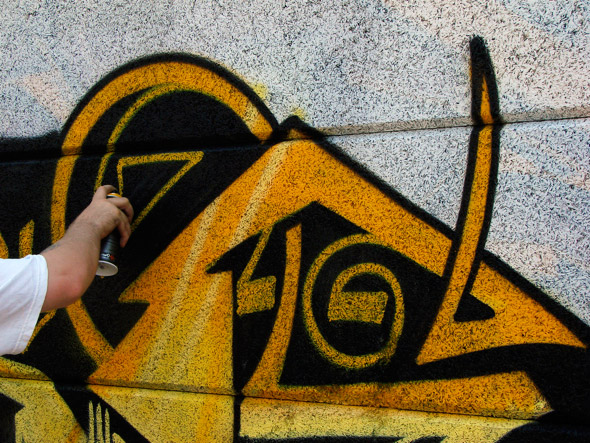 A year into development, the mural promises to become an icon for Parkdale and West Queen West, which should prove good news for tourism-hungry businesses in the area. I recently sat down with Jose Gabriel, co-curator of the mural, to talk about the project in more detail. 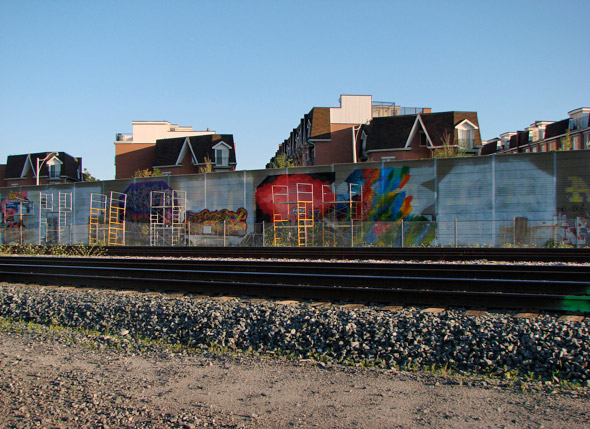 The mural is well-organized and, it should be noted, completely legal. About a year ago, the City of Toronto issued the sound barrier's owner, Urbancorp, a written warning to clean up the graffiti on their sound barrier in accordance with Mayor Rob Ford's crackdown on graffiti. Instead of painting over the wall again with grey paint (and thus providing a fresh canvas for the next round of illegal vandalism) the property developers approached Gabriel and his colleagues to commission a mural. 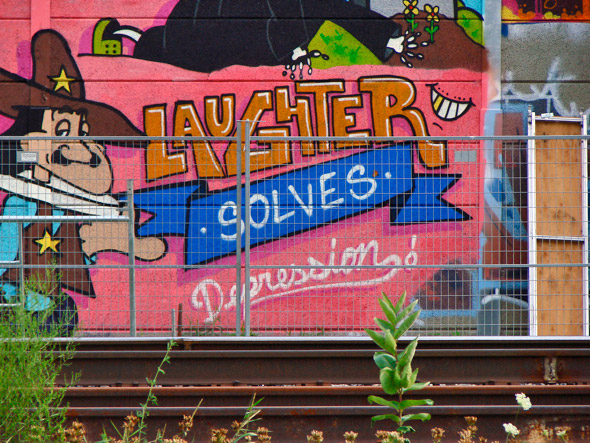 "That's why I don't hate Rob Ford," laughs Gabriel "I think he's great... ever since Rob Ford brought graffiti into the limelight, I keep getting calls from all types of people saying put a mural up on our property so that we don't have to deal with having the city ticket us constantly."

"While [the developers] spent more money on this mural now than they would have on normal painters, this will reduce vandalism moving forward and hopefully save them some money later." It's also a way for Urbancorp to give back to the community, Gabriell notes, given the unpopular demolitions of old arts warehouses in the area like 48 Abell. 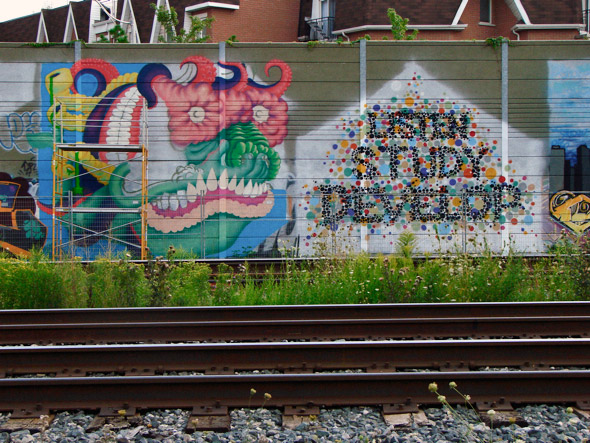 That the mural will be finished at all, however, was no thanks to the City of Toronto's StART program (supposedly in charge of funding public mural projects such as these). Gabriel and his colleagues depended on most of the artists involved to volunteer their time, and the project has proceeded without any financial support from the City, which seems to favour street art projects mediated by third-party, non-profit organizations.

And while Gabriel was incredibly tight-lipped about the dozens of artists involved in the project (access to the site is prohibited to most journalists due to safety regulations), he did tell me a little bit about one of the last pieces, painted by neo-punk musicians and graffiti artists KIZ and LEGIN. 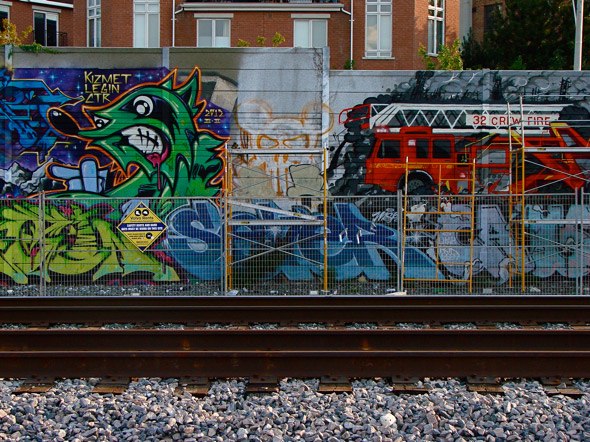 With the support of two other artists, CTR and JAMZ (who painted the adjacent fire truck), KIZ and LEGIN painted this last section of the mural, which includes a massive image of a Raccoon. 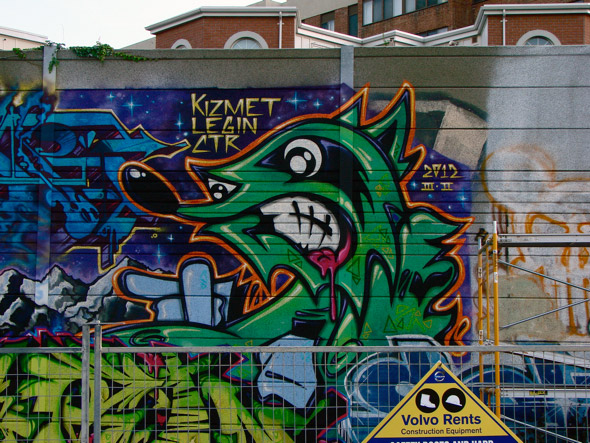 "The Raccoon relates directly with living in Toronto, because raccoons are everywhere," Gabriel explains. "And, like humans, they're forced to adapt to living in a city. Raccoons and graffiti writers are so much alike."

A testament to the generous sense of humour characteristic of many graffiti writers, the project's co-curator continues: "Those guys came correct. And they finished in two days. They had a plan, a boom box, a cooler filled with sandwiches, water, and juice. That's how you paint a wall: juice, water, sandwiches, boom box." 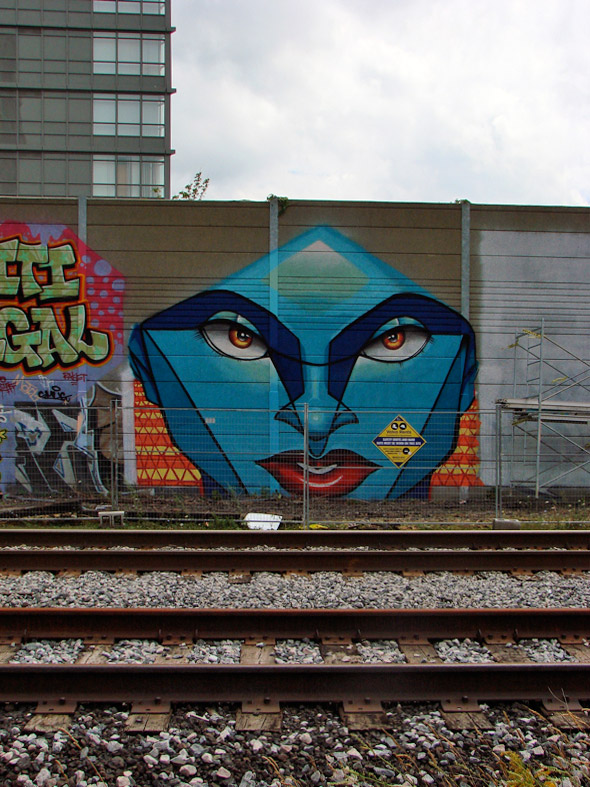 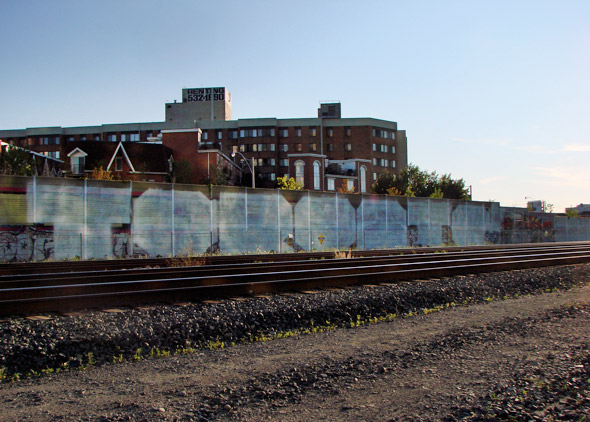 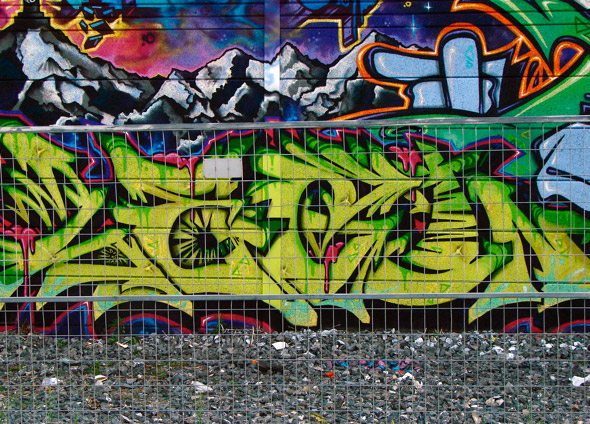 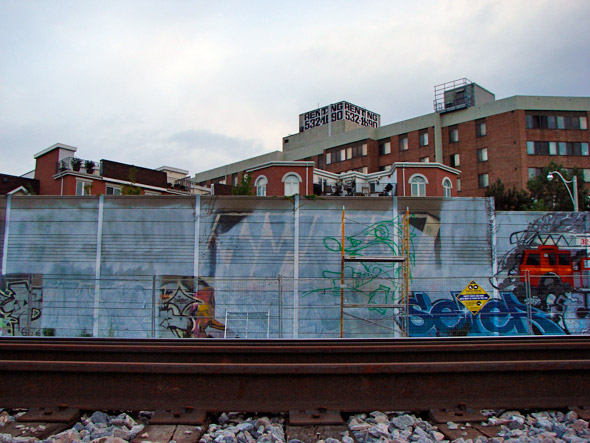 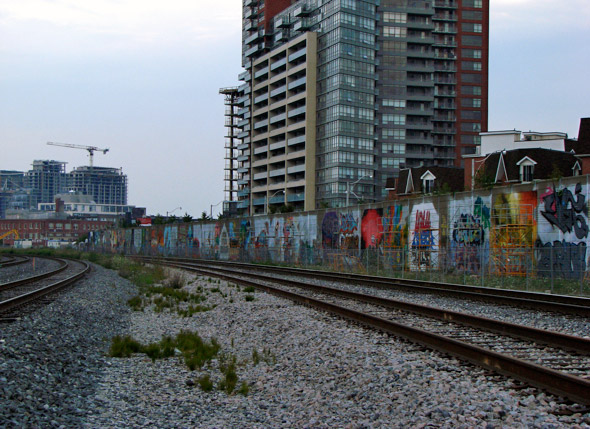 Writing and photography by Peter Jermyn