What is the future for comic shops in Toronto?

Comic shops in Toronto sometimes get a bad rap, despite the fact that science fiction powers our future. It's hard to ignore that superhero movies make a billion dollars in a week and we all own Star Trek communicators. It's validating for me. I spent years being laughed at by my peers for having "stupid" interests, and now that geek is chic I proudly laugh back--quietly, and behind some dumpsters on the other side of Toronto in case they heard me.

But what about the stores that helped feed our collective imaginations? Comic shops serve as holy ground for fans of all stripes, inspiring new scientists and authors and creating entire communities. As high-speed internet and services like Comixology emerge, there's a fear that comic shops will become obsolete. How will retailers adapt to the changing landscape? How will they survive in our fast-paced high-tech world?

Luckily for you, I'm a curious one.

To find out how stores are expected to survive, I asked why some closed down, or face closing down.

"Three things killed Dragon Lady," Kilmartin said of his old store. "The owner was in his seventies and wanted to retire, rent prices were going up, and finally, industry complacency. People know what they want. Like, the newest Walking Dead sells, but Green Lantern will sit on the shelf for months."

Chin, whose store once boasted two floors instead of the loft it now occupies, explained his situation: "We opened in 1987, and it was the best time for us because disposable income was about 50%. Now, it's maybe less than five percent, so people have to prioritize. Plus, I think too much choice killed the market. So much is being printed that people don't know what to buy."

Finally, Collison told of Third Quadrant's final days as an independent store: "The landlord decided to sell the building towards the end of 2007, and then at the beginning of 2008 the real estate market took a dive. We moved to Queen and Spadina, and I thought that people wouldn't mind an extra ten minute walk. I lost 80% of my business."

Making rent is a common problem for Toronto's retailers. So how do stores stay afloat? Sometimes, location matters; The Lounge and Gallery sits near several schools, including the University of Toronto and Ryerson. Other times shops get help from the film industry; Collison apparently sold every copy of The Infinity Gauntlet he had thanks to The Avengers' success.

"I told people I was going out of business about a year and a half ago and sold all my stock," Chin said, smiling.

Well. That works, too.

Leon Emmett offered some thoughts: "A lot of retailers need to look at what they do and who their customers are. Many are at a loss for evolving their business models. Things are changing. People who can't change won't make it."

"It's all relevant to the expectations you have," Dan Merisanu said in a telephone interview, "We're always working hard here and we're open to trying new stuff. We usually attend schools and conventions and sell different products to see what works. Posters don't sell in the store, for example, but are really popular at shows."

George Zotti explained some past and future plans: "We do outreach, advertise in schools, and work at charity events and launch parties. We're putting a cafe in the new Dundas store, and we're going to set up iPads in there so people can read comics. You can read comics on them but they'll be issues from three months prior. We'll have the current ones in print." 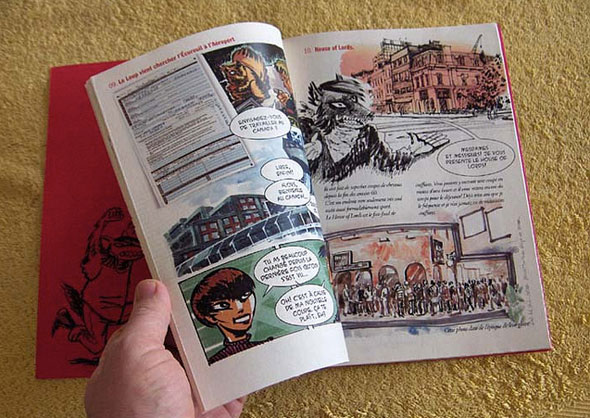 With the economy sinking and with technological progress booming, we can't afford to be set in our ways. We need plans, and more importantly: the right mindset. For example: what attitudes do my six interviewees have about the future of their stores? How do they plan to face recession, rising rent prices, and the ever-looming shadow of digital distribution?

Collison: "A copy of Action Comics Number One recently sold for 2.1 million dollars. That shows that there are still people who want to have the hard book in their hands."

Merisanu: "We treat our customers fairly, and we try to treat them the way we want to be treated. And me, I'm a risk-taker. I try stuff, and if it fails then I'm okay with it."

Chin: "I'm going to keep my customers happy. I mean, hey; some still appreciate vinyl even though everyone else downloads MP3s."

Emmett: "Comics are important because comics are the last remaining subversive medium. The paradigm is different from film, because comics engage in cognitive and imaginative faculties."

Kilmartin: "In the end, going to comic book stories is an outing, not an obligation. In this business, you want that. You want to be a destination."

Zotti: "There has always been talk of doom and gloom in the comics world for twenty years, but you know what? We evolve. Our industry is extremely unique, because we get new content every week. So, there's a reason to come back every week."

For more info on comic shops in Toronto, view our directory of Toronto comics shops.