Although it might not be as opulent as other iterations around the world, Toronto is finally set to get its own Soho House — and just in time for TIFF, at which the group has held pop-ups for the last three years. The private member clubs — of which there are currently 10 locations across the world in cities like London, New York, and Berlin — cater to creative types who occupy the film and media industries (amongst others).

News that the group would be opening a Toronto club has been out for a while, but only recently have the details regarding what's in store finally emerged. Set to open across from the still-under construction Shangri-La Hotel at 192 Adelaide St. W., the local branch will be located in a 10,000 square foot space in a restored heritage building that once served as a hotel in the late 19th century. 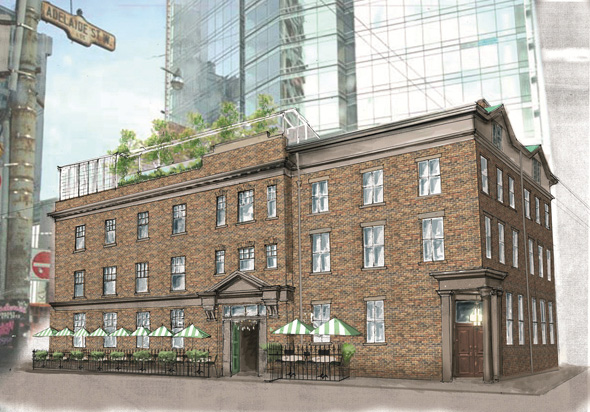 The multi-floor space will be outfitted with a partially enclosed rooftop bar, a library, a house kitchen and pantry bar, and the main lounge area, which will be named the Pretzel Bell Bar Lounge, apparently after the tavern that originally occupied the space. That pales in comparison to plans for a Soho House in Istanbul, which is set to occupy three buildings, collectively equipped with 88 bedrooms and multiple rooftop pools.

But, hey, maybe there's something to the relative modesty of the Toronto house. Despite the popularity of the so-called pop-ups in the past, a permanent club is another ballgame altogether, and it's dubious that Toronto could support the scale of operation that's on offer in some of the other cities.

So what's it all going to cost? Soho House memberships are quite consistent across the various cities in which clubs are located. Local memberships are typically $1800 and $900 for those under 27 years of age, while memberships to every house run at $2400 and $1200, respectively. To up the value of the Toronto membership given its lack of on-site amenities (bear in mind, I use that term relatively), these dues also gain one access to the screening room, fitness centre, pool, spa, meeting rooms, ballrooms and valet parking on offer at the Shangri-La.

What do you think? Is it worth it?